From the activation of the ancestral memory of the Caribbean contained in its artifacts, curator Yina Jiménez Suriel proposes a re-appropriation of travel and scape, against the colonial order, as other ways of world-making for survival. 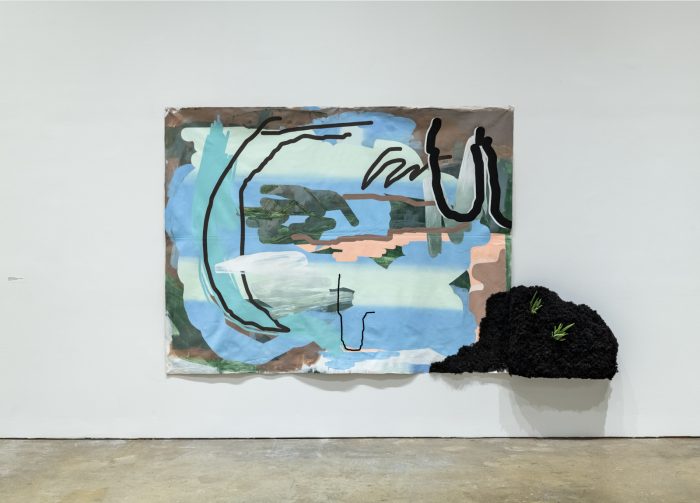 The underwater mountain range we call Sierra de Bahoruco in the Dominican Republic and Massif de la Hotte, Massif de la Selle in Haiti, knows this soundtrack very well. Many of the escape trails on the island lead to its jungle. For a long time, the call to resistance was heard from there. And it still resonates—surely it resonates—and could be amplified by our own bodies if we inhabit active listening.

In the Caribbean, travel has been a strategy to ensure one’s own survival. This was the case in times of the indigenous communities. Some research has shown that, during these periods, circulation between the islands and the mainland was unreserved, meaning the sea was an extension of the territories.

The fututo is an artifact for the Maroon experience that has been used by both original[1]and enslaved African communities, followed by those of us who survived them. Its sounds traveled throughout the region due to the circularity of the Caribbean at that time. Today few know how to touch the fututo, but from it and its records, we are building other artifacts for resistance and alliance, which are imminent, to create other possible fictions. 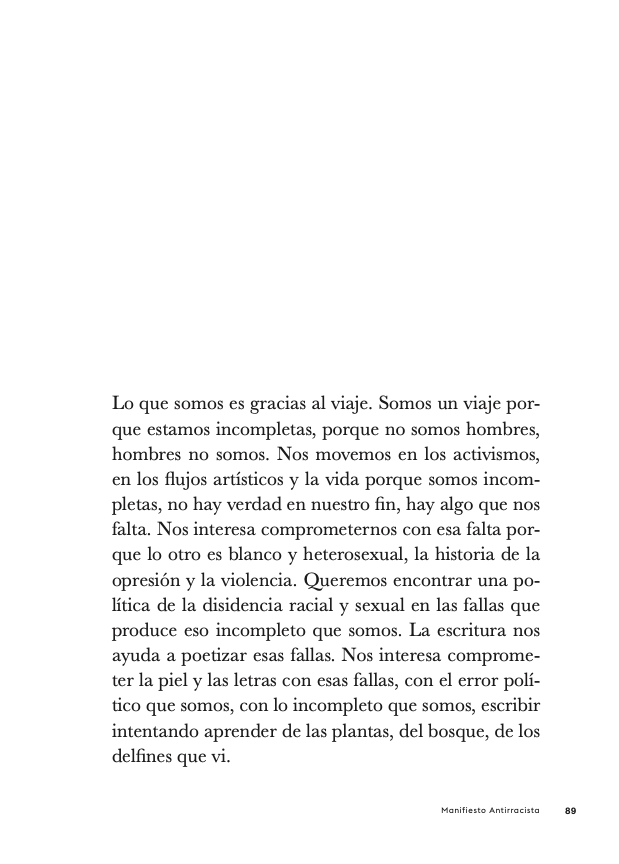 In the Caribbean, travel has been a strategy to ensure one’s own survival. This was the case in times of the indigenous communities. Some research has shown that, during these periods, circulation between the islands and the mainland was unreserved, meaning the sea was an extension of the territories. But there was a change in the significance of travel when the process of colonization began in the region and the communities’ interaction with their geography was redefined by the economic interests of the colonizing countries. Restricting the population’s access to the sea was a way to ensure the colonial network’s survival and its subsequent mutation through the different forms of governance that coexist today. Since the end of the 15th century, travel has been linked to colonialism and since then, fleeing has displaced and re-signified this action; in this archipelago, the indigenous and enslaved African communities found in flight the path to their own survival.

From the escape emerged the manieles, communities of resistance where both populations lived together in mountainous areas. The establishment of these communities was the product of an imaginary journey in which they sought, from their ancestors, the means that allowed them to assert their identities and the construction and social reproduction of their modus operandi. Likewise, in the Dominican Republic, around the sugar mills of Boca de Nigua, Engombe, and many others, there are many trails that lead to the nearest mountains, and from there, the journey to the Sierra de Bahoruco begins. There are also many others that link the Haitian Cabo with Los Mina in Santo Domingo. 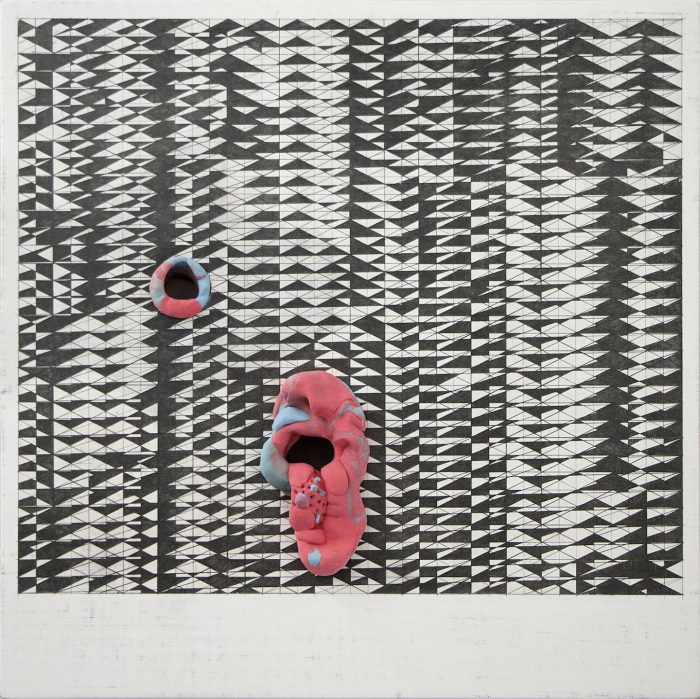 We deserve to re-inhabit the meaning of travel and reconcile it with that of flight if we intend to reactivate or generate new forms of resistance to the current dynamics in the Caribbean. Perhaps that is why during my visits to Sabana de la Mar just a year ago, when the artists Engel Leonardo, Diego de la Cruz and Gabriel Maldonado of the MAOF collective were building a cayuco together with Ramírez and Chano as part of their research project on circularity in the region, my reflections always coincided, in one way or another, in thinking (from) the journey, not by the action per se but rather by its main components: awareness of the ephemeral, wandering, knowledge trafficking, and relations management; and how these four factors can offer a possible methodology and strategy to operate. I now return to those notes in the midst of the current circumstances where borders—a key symbolic instrument in the colonial system’s survival—are reasserted through the control of interactions for the purposes of pandemic control. How have current necropolitical measures re-signified the notions of travel and flight? Does the current configuration of borders change any condition of travel and escape as actions of resistance and alliance, for the own survival of the people?

[…] in order to make the journey in the cayuco, as in the sea, not one but all the forces of a common body are necessary. The movement of a ship has an impact on its stability and, therefore, on the possibility of a shipwreck.

Wandering, on the other hand, is the establishment of an essential doubt, to know oneself outside the conventional frameworks of functioning, to discard what is safe, and to bet on different ways of doing and operating. To err is the act of thinking about the route we are taking while reflecting; discarding straight roads and opting for curves. It is opposite to the concept of productivity of the socioeconomic system in which we live, it relies on new logics developed from what is considered unproductive. Wandering is a commitment to experience, to do-doing, to aimless drifting. 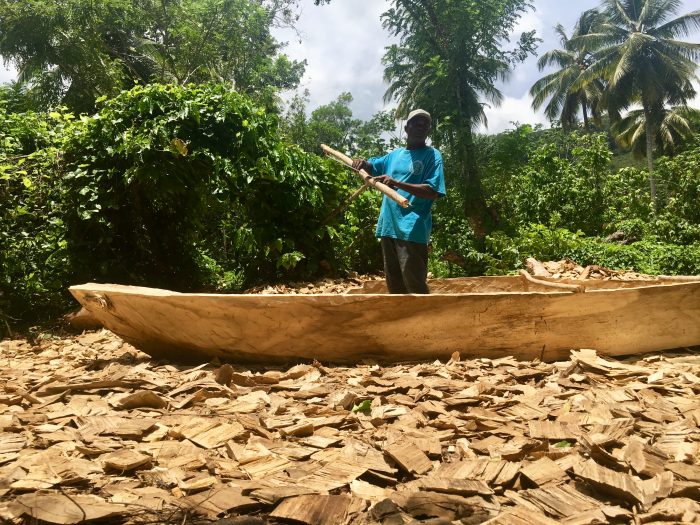 The third factor, knowledge trafficking, refers to our conscious or unconscious action of thinking and reflecting regionally and inside the very terms of lived experience but outside the radar of colonialism, without these ideas being filtered through the neoliberal framework. The goal is not to find better things, but to observe and assume a repository of collective knowledge. In this type of traffic, orality is fundamental; through its knowledge of the immediate socio-cultural environment that has become a collective historical memory is transmitted. Perhaps the particularity of orality versus writing is precisely that the former is stimulated and occurs simultaneously with other actions, while writing requires doing only that activity. For example, it is very difficult to row and write at the same time.

The last Sunday in Sabana de la Mar, we sailed. The main reflection of that experience was that in order to make the journey in the cayuco, as in the sea, not one but all the forces of a common body are necessary. The movement of a ship has an impact on its stability and, therefore, on the possibility of a shipwreck. While on a journey, we think with and about the other person: relations are managed with a logic that relationships require mutual (re)knowledge. This concept also contemplates ways of doing, hence its closeness to knowledge trafficking and wandering. In the Caribbean region, with its unique socio-economic realities, we should not necessarily think in terms of Western academia, where knowledge is compartmentalized for exploitation. Our context demands that we think differently and produce knowledge from the relational, from the interconnected multiplicities of being, knowledge, and value, as stated by Edouard Glissant.

During my childhood, I made some chichiguas.[2] A few days ago I was talking with a friend about them, from that conversation I want to extract some random notes to create and fly chichiguas:

– The chichigua as an artifact is an extension of the person who is flying it.

– A chichigua is not designed to touch the ground. It is built on the ground, but where it creates life is in the sky.

– Vinyl fabrics or banners are a perfect material for the chichiguas. The best place to find them is on the river bank, polished by the water.

– Coconut palm stalk rods usually work for small chichiguas. If the stalk is a little greenish, the rods will be more flexible.

– You need three sticks of the same size. Two of them join together to form an X and the third is placed horizontally on top of the others, the latter automatically defining the “front” part of the chichigua which curiously is the one that will always be facing the earth.

– The rods are the connecting portal between the structure of the chichigua and the ball of string that serves to fly it. 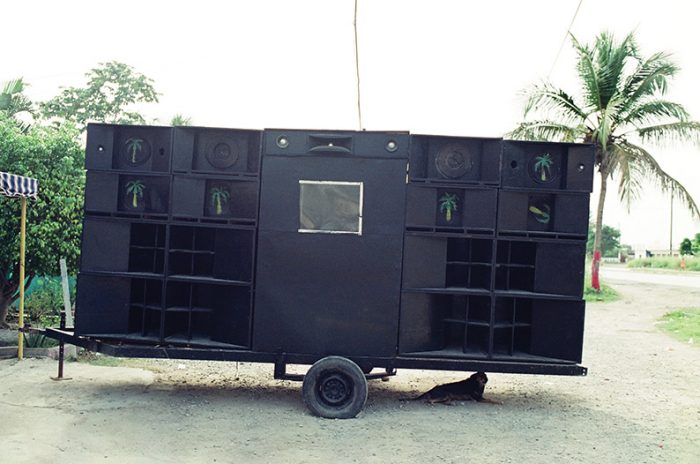 – You have two ways to communicate with the chichigua: listening and observing.

– The chichigua can have three types of sound registers according to the element that is placed on it: if it does not have fins it emits a vibration, one that has fins emits a knocking sound in the air, when it has a stinger, it generates a buzz.

– The thread is the communication channel between the one on earth and the one in heaven. It unites and separates at the same time.

– You can send a message to the chichigua through a piece of paper. To do this you must completely unroll the ball of string and make a small hole in the paper with the message you want to send; the vibration will take care of boosting it up.

– If you are flying a chichigua in the Cibao valley, the escape route of the chichigua when the thread breaks will be towards the Cordillera Septentrional, a place of many Maroon communities, of many manieles. I want to think that if the Maroon communities were established as the fruit of imagination, then we, in many ways, live in the imagination of our ancestors. And since we live in it, we will know how to find the way to touch the future in order to meet.

The fututo is an artifact that produces sounds. It is a wind instrument whose origin is the sea. The Caribbean Sea is both passageway and portal. 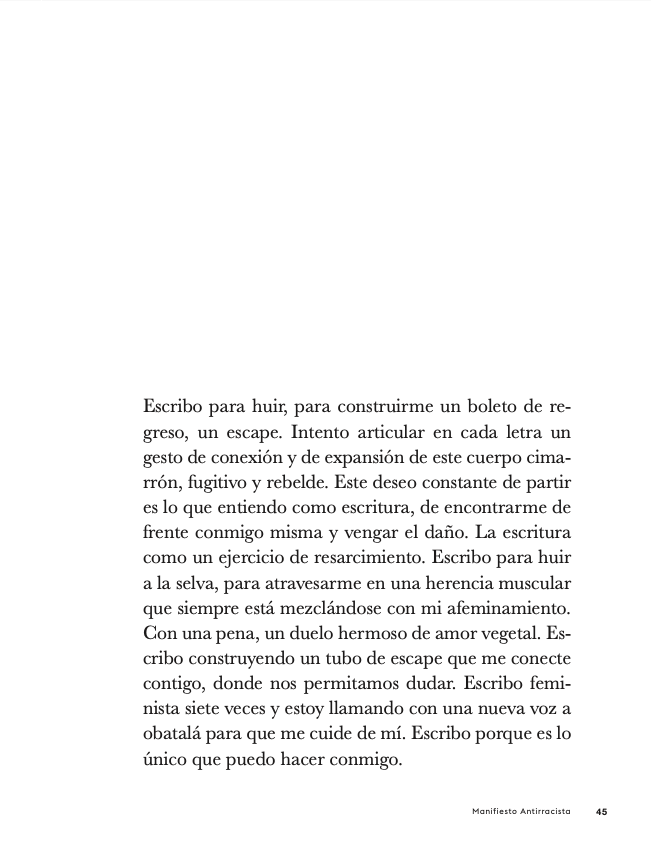 Thanks to Ricardo Ariel Toribio, Johan Mijail, and Felipe Rosa for thinking with me.

This text was translated by Carla Canseco and copy-edited by Isabel Ruiz.

The Shadow and the Ash