10 Performances in Mexico Millennials Didn’t Get to See: 1st part 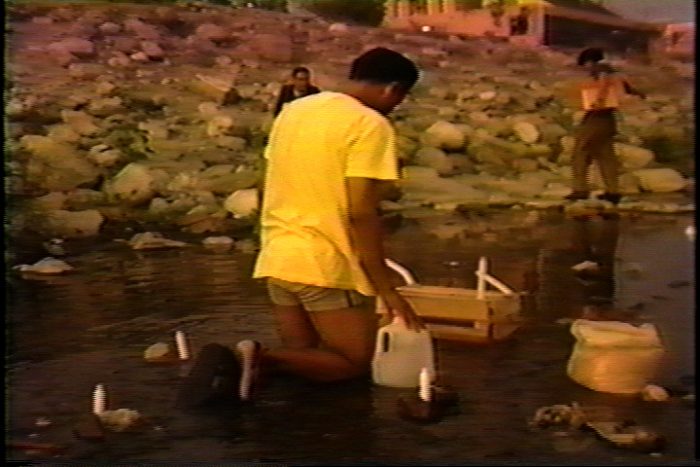 In 1989, Juan José González performed Nahualtocailt [1], two processions or ritualistic actions that took place in the center of Monterrey. In the first, the artist appears shirtless and kneeling, at the waters of the Santa Catarina river [2], and under the bridge [3] that connects the city to La Independencia, an immigrant neighborhood. The figure establishes a connection to the lime, mud, fire, and water; the use of these natural elements alludes to the power of transformation that mixing them together entails. Later on, and with a gas mask and construction hat on, González takes a leather drum and goes out to navigate a route defined by himself. Juan José’s walking presence breaks into the urban public space; semi-naked, sonorizing his walk, he announces the opposite paths between life, product of work in the era of capital, and the degradation of indigenous peoples and immigrants. The performance ends when the artist comes back to the river, at the moment in which he proclaims: “[…] Do not display pain, Nahualtocailt, submerge yourself in the waters and forget about me. First procession: death […]”

According to researcher Rocío Cárdenas Pacheco, this action signaled a new path for practices of performance and art in general: an impulse to inhabit the city and leave art schools; a set of maneuvers of resistance against power that are not necessarily violent. 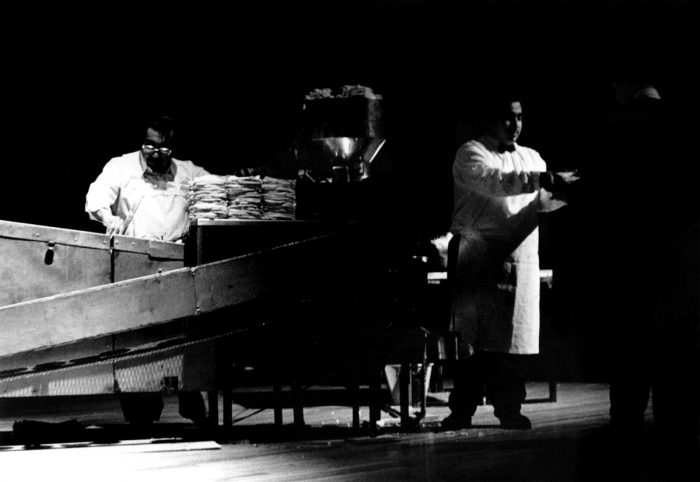 19 Concreto gave the action it presented in 1995 during the Week of Industrial Culture at the Museo Universitario del Chopo the name Orden y progreso [5] [Order and Progress]. For that event, Lorena Orozco, Alejandro Sánchez, Luis Barbosa, Fernando de Alba, Víctor Martínez, Ulises Mora, and Roberto de la Torre proposed a perfect two-time metric joint action. A discordant scene presented, on the right side, a gas tortilla machine activated by three tortilleros demonstrated the chain-process that emerged in 1920 and that is still frequently used today. On the other side of the stage was a table formed by a trio of televisions, where a photograph of Justo Sierra [6] was being transmitted interjected with an animation of his mouth and a recording of a text by the politician himself.

In the second scene, set to the rhythm demarcated by Juventino Rosas’s waltz Sobre las olas, the group’s members piled tortillas on top of the pedestal of televisions. Thus, when the waltz nears the end, the artists’ hands stop securing the structure. Immediately, the soft and irregular mass of tortillas crumbled to the floor. In the end, attendees were invited to take the tortillas.

In the words of Víctor Martínez, “The notion of the column was very important as a phallic symbol of architecture, the vertical construction and progress that at the same time contains the Greco-Roman prestige replicated in official buildings of different periods.” 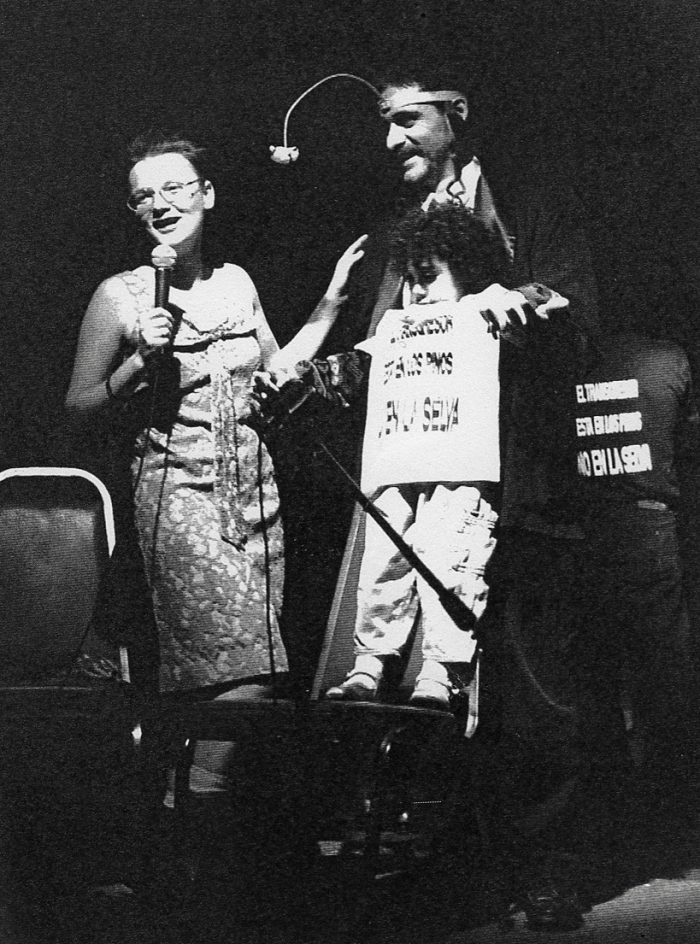 On January 2, 1994, the Mexican government called the Zapatista National Liberation Army (EZLN) transgressors of the law in order to criminalize them for the armed uprising that occurred the day before.

In July, as part of Alter-nativo [Alter-native], Multidisciplinary Week of Native Art at the Polyforum Siqueiros, Doris Steinbichler, an artist of Austrian origins who has been living in Mexico since 1990, called for a collective performance: El transgresor está en Los Pinos, no en la selva, named after a slogan taken from one of the marches organized during the clashes and negotiations between the EZLN and the government.

The performance was a parody of a fashion catwalk with music, an eccentric designer—the artist—and two commentators. Simultaneously, a group of models paraded with different pieces that reproduced the aforementioned slogan. They gesticulated and danced with costumes that referred to different social activities, such as sunbathing, playing soccer, or going out dancing, and different roles like “Miss Chiapas.” In turn, a “Zapatista” collective circulated before the public while the presenters spoke about the improvement of their look. The performance came to an end when the participants become integrated into the same symphony and dance, and when a man with a balaclava grabbed Doris in the last moments of the performance and extracted her out of the tumult.

In posing the question “who are the true transgressors,” the title opened up a public discussion pointing to the government, shedding light on its manipulations and deceptions that start out as simple discursive acts, but which conclude with extermination. 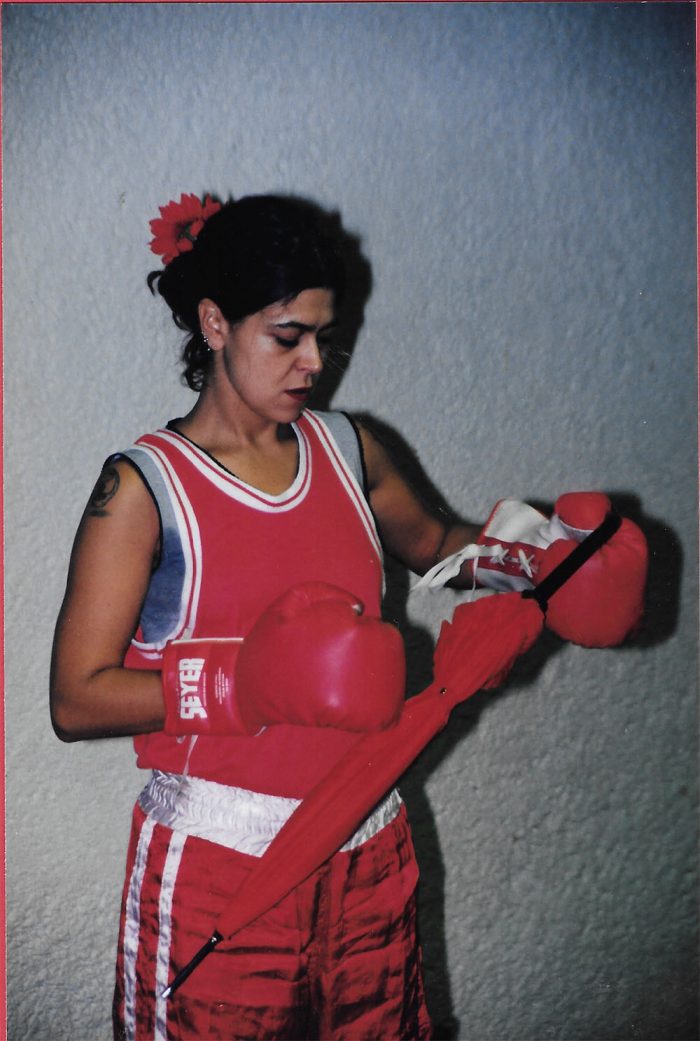 Chuchita [7] appeared in Pelea en diez regalos [8],  with Andrea playing the part of a boxer and the artist Eduardo Abaroa that of a referee organized ten rounds in which a boxer tries to read and hold a microphone, hindered by a mouthguard and gloves. Her inability to explain herself forces her to leave the ring to present elements associated with female characters in literature, written or created by men. In her attempt to establish a correlation, she returns to the ring. Unable to speak, Abaroa translates her words. The domination of the masculine voice over the feminine word prevails turning this action into an irony.

After this first appearance, the artist was invited [9] to give a workshop in Tuxtla. For this performance, the boxer gets a head start and, dressed in her suit, initiates the action from the moment she boards the plane. The premise was that the acclaimed athlete, one of Mexico’s most famous welterweight wrestlers, was visiting her fans (the workshop’s participants) in the city.

Outside of the ring, Chuchita led a touristic visit. The degree of proximity with her followers provided a glimpse of a woman with a lot of discipline, interested in promoting sports, with stress problems, a smoker, and an alcoholic. The visit was photographed by two workshop assistants, who wrote down their personal impressions of Chuchita, which Andrea built from a study both of the role of the boxer in the social environment, and from touristic photography. This action in Tuxtla was for Ferreyra another evident gap between documentation and action, for the written and visual records with fictional tints brought her closer to documentary narratives that are not necessarily true but plausible.

On Friday, October 13, Chuchita jumped into the ocean in Puerto Rico. The knock-out left the red umbrella and boxer clothes floating. This fight with no rival symbolized the disappearance of her alter ego. 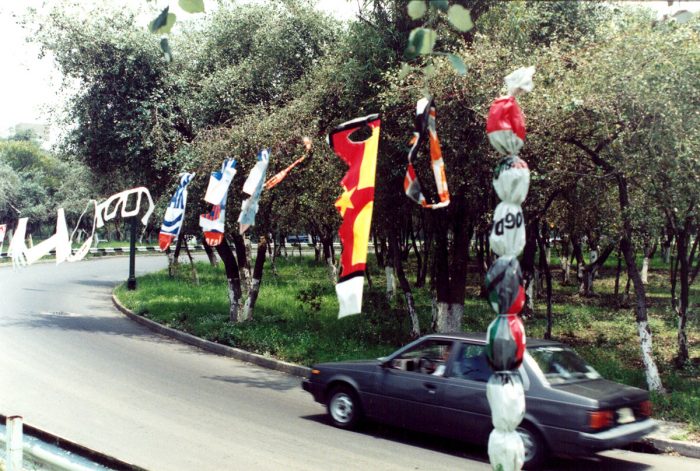 For the elections of 1997, in which the contend was for the Headquarters of Government of the then Distrito Federal and the delegations to the Legislative Assembly, each party made its campaign. Banners and posters were made out of plastic prevailed, which was significant for Katnira Bello, Edith Reyes, Elena Grada, and David C. Agundis because of the excess of propaganda: the plastic, which has short lived use, but which has a lifespan longer than those of the voters, disappeared from the passers-by’s attention in the blink of an eye.

During the month of June, Katnira and her peers dedicated themselves to collecting and cleaning the plastic materials in order to make a series of new elements. At that same time, Mexico was dealing with the aftermath of a hurricane season that had left a large number of affected people who were not receiving government attention. Why spend state money on “junk” propaganda instead of helping those who suffered the disaster? And so, outside of the current INE, the artists led a protest that involved presenting to pedestrians other possible uses for plastic in an installation—cars, a clothesline with clothes, raincoats, banners, chairs, tables, school furniture, books, and even fake food—which showed ways to help the hurricane victims who remained living outdoors.

Los usos de los desusos. Póngase buzo was an action in public space in relation to a social and symbolic space, which went past the individual body and into the social one for the construction of public opinion, about ecology and the inequalities imposed by the government.

Second part of the article here.

[1] Nahuallatolli the metalanguage of witches, shamans, and healers that seeks to maintain the power of the Nahuatl word by “disguising it” in the face of the superposition of Hispanic words to the loss of their own language.

[2] The river is symbolically important because it spatially and demographically divides the urban layout of the city through the marginalization of workers.

[3] In 1979, the bridge was renamed “the Pope’s bridge” as a response to a visit by John Paul II. Its reconstruction was the result of an alliance between businessmen from the city and the religious clerical catholic congregation known as the Legionaries of Christ.

[4] With more than a century of industrial economic history, Monterrey, became an attractive nucleus for immigrants who, attracted by work in the factories, were constantly displaced from the country to the city. The modernist and industrial design favored an urban development suitable for the use of automobiles, which is visually illustrated in the record of this performance, and provides a diver- gent vision between the stage and ritual created by González.

[5] Positivist motto August Comte promulgated in 1839 and the phrase worded on the Brazilian flag.

[6] Justo Sierra, Minister of Public Instruction and the Arts (1905-1911), during a part of Porfirio Díaz’s long presidency, was one of the biggest proponents of a positivist doctrine.

[7] Chuchita is the pseudonym and alter ego that Andrea Ferreyra took on during 1999 and 2000. For the artist, doing performances is about creating an extension of herself and in this case, around being a boxer; it is another way of looking at herself, of facing a whole chain of actions under a personal aesthetic and projection. The name of this alter ego comes from a colloquial expression “A Chuchita la bolsearon” [Chuchita was mugged], a saying that refers a person’s lack of consideration and importance and usually refers a woman.

[8] The performance was part of the round table discussion “Evolución del personaje femenino en la novela y las artes plásticas del milenio” [Evolution of the Female Character in the Novel and Visual Arts of the Millennium], held at the José Martí Cultural Center.

[9] Curator Guillermo Santamarina invited her to give a workshop in the Casa de la Cultura Jaime Sabines in Tuxtla Gutiérrez, capital of the state of Chiapas.

[10] On the 23rd, 24th, and 30th of November several of these artists performed actions at the Santo Domingo Cultural Center. 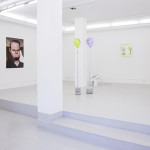 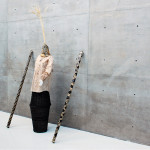 Field Perspectives 2019: The Possibility of Uncertainty 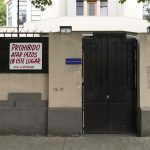 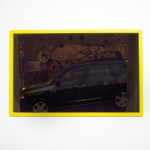