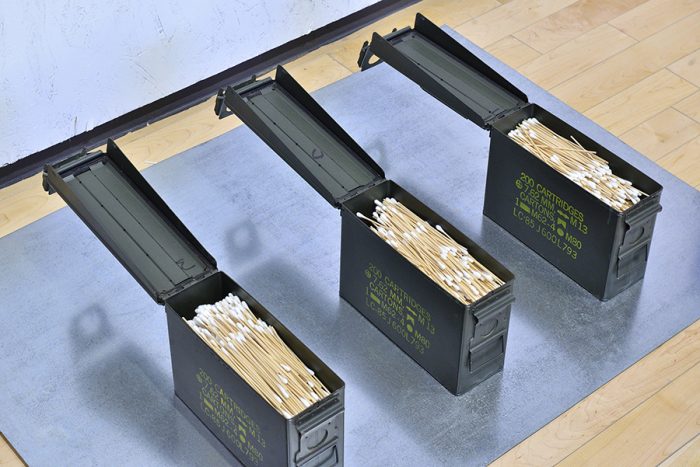 In the year 2016, the Museum of Modern Art of New York (MoMA) received a donation composed of 102 works of art from the Colección Patricia Phelps de Cisneros (CPPC). With it came the Cisneros Institute dedicated to the research of art produced in Latin America. [1] Both its director, Glenn Lowry, and the director of the new institute, Inés Katzenstein, have insisted on the vocation of the museum for the art of the region and commented on the regular acquisitions of Latin American art that have taken place in different periods of its history. [2]

Lowry has made clear the crucial role of Patricia Phelps in the inclusion of modernist work made by artists from Venezuela, Brazil, Argentina and Uruguay since the 1920s in the MoMA collections. She has also managed to incorporate pieces of contemporary art made up to the 1990s throughout the region. As if this was not enough, one of the exhibitions that will reopen the doors of MoMA, next October, will be precisely Sur moderno: Journeys of Abstraction, the first curatorial interpretation of the donation made by the CPPC.

Within this context, an analysis of Portadores de sentido. Arte contemporáneo en la Colección Patricia Phelps de Cisneros becomes necessary, an exhibiton recently presented at the Museo Amparo curated by Sofía Hernández Chong Cuy, who also happened to be the Curator of Contemporary Art for the collection, from 2011 to 2017. Organized in four sections, the exhibition was composed by more than a hundred works produced between 1990 and 2015. 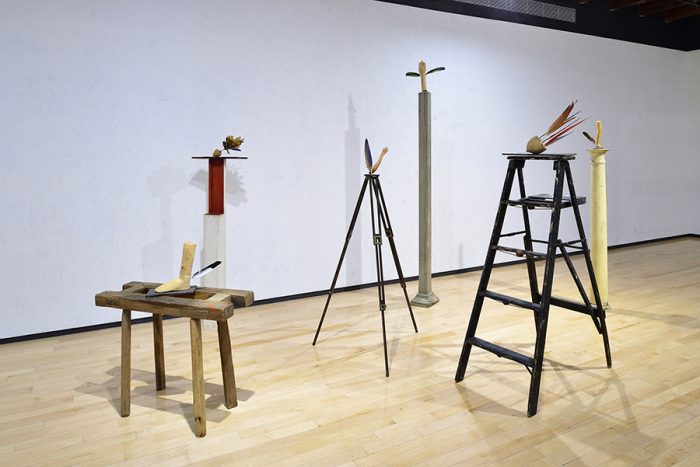 In this first section, a couple of works with references to native peoples stand out: Mamá Kalunga (1992) by José Bedia and Santos y profetas (1995) by Laura Anderson Barbata. Both share an interest in socializing indigenous cultural elements without making them explicit. This requires a museographic translation of the respective imaginaries with which they worked: Bedia with the Afro-Caribbean religion Palo Monte; and Anderson Barbata with the cultural practices of the Yanomami, Ye’kuana and Piaroa of the Venezuelan Amazon. This apparent contradiction forces the viewer to ponder the plastic qualities of the work and to notice in detail the elements that make them up. While in the work of Bedia the conventions of the Western plastic arts are broken (especially the negation of the quadrilateral as painting’s foundational space), some narrative elements slip in to allow us a glimpse towards the complex representation. In the installation of Anderson Barbata, the juxtaposition of objects produced by the sculptures highlights their open process, and establishes a correspondence with those who practice a manual skill in precarious conditions.

The use of representation strategies considered by broad social sectors in Latin America as “craft” is recurrent in other works of the same section, in particular those made by Pepe López and Oswaldo Terreros. Of course, these are problematic choices when one begins to inquire about the conditions of production and its relation to class privileges, asymmetries between rural and urban life or the verification of decent work.

Some works propose a critical reading in the musealization of indigenous artifacts, a narrative from which they are still understood today. This is the case of the works by Mariana Castillo Deball, Christian Vinck and Armando Andrade Tudela. Some works that offer insights into the practice of spoliation in the continent were also included in this first section: as is the case of Regina José Galindo, Alessandro Balteo-Yazbeck and Luis Molina-Pantin. 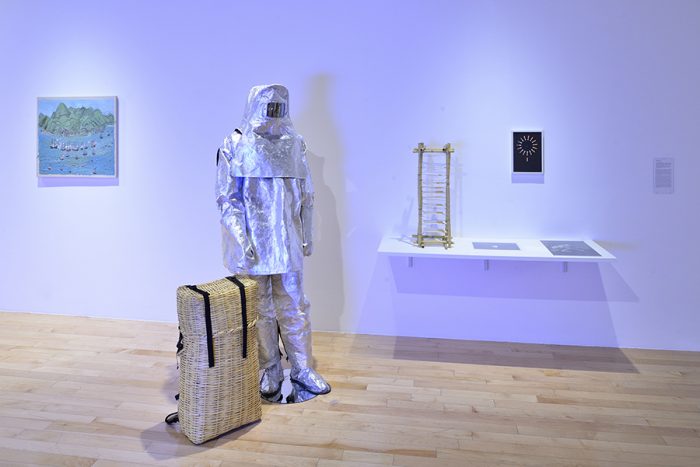 From this section, I highlight two artists and their proposals. In Poema volcánico (2014), Eduardo Navarro presents the documentation and tools he created with which he explored the crater of an active volcano, the Guagua Pichincha of Ecuador. The result of his incursion can be read as an update of two traditions from other experiences of artistic modernity: nineteenth-century naturalism and German landscaping, which preceded the establishment of modern scientific disciplines. Although Navarro had academic and professional advice, he also used the vernacular knowledge of the region to create his own exploration tools. Poema volcánico holds a colonial subtext by including certain variables that conditioned the realization of the project: the role of the explorer who “discovers” a territory not incorporated into the interests of scientific research, the process informed by the local cognitive capital, and the recovery of the natural scientist as a heroic figure. An unexpected metaphor about artists as ethnographers.

The sculpture of Manuela Ribadeneira, Tiwinza Mon Amour (2005), is a 1:1000 representation of a portion of the jungle between Ecuador and Peru that an international commission decided to award to Ecuador in 1998. A war zone between the two countries, landmines were used indiscriminately in this area, and have been slowly withdrawn following schemes of international cooperation. The peaceful view offered by Ribadeneira does not reveal that 6,500 mines remain to be deactivated at that border: a tension between the landscape as a representation and a much more complex geopolitical experience. [3] 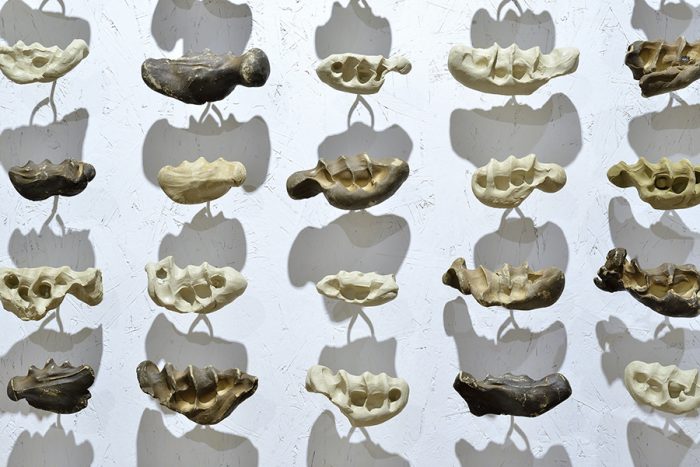 This section establishes a clear link with the vocation of the CPPC for abstraction and geometry in Latin America, the best known and commercialized art in the international art circuit.

I highlight the works of Iosu Aramburu, who uses abstraction to reflect on the temporalities of architecture and art in Peru. In Ser de su tiempo (2012 – 2013), Aramburu reflects on the incessant effacement of the pre-colonial legacy in favor of new architectural orders. The oil landscape is stressed when a neon sculpture is mounted on it, a paraphrase on how mutually exclusive the choices between heritage and new buildings result. In the neighboring series, Variaciones (2014), abstraction is an homage. These are cement drawings on paper, formal echoes of works made by Peruvian artists from the mid last century, such as Jorque Piqueras or Ricardo Grau.

In El Guardaespaldas (2002), Alejandro Paz Navas presents the documentation of an action in the streets of Guatemala City: a homeless man begs for alms while being followed at close range by a personal guard. This unsolicited convergence reveals the polarities in the Guatemalan social scale, while the poor are left at the mercy of the different manifestations of violence, privileged sectors can afford additional protection in face of a police force historically exceeded by impunity and power pacts.

Federico Herrero is one of the artists with the largest number of pieces in Portadores de sentido. In this section, three sculptures from the Cascada series (2011) are shown, which can be read as mockups of different solutions in the urban space. Made with cement and wood agglomerates, the quality of improvisation is amplified due to the sculptures’ supports, work tables, which together with the color accents link the work in the studio with their interest in the public space.

Although Ambientes concretos emphasizes an interest in certain recurring contemporary art solutions in the CPPC, the set of selected works is atomized and somewhat repetitive. It would have been more advisable to provide a better contextualization of the Latin American cities from which these pieces emerge as specific reflections, instead of arranging them as an archipelago of proposals, dispersed in a room. The lack of specificity reinforces the idea of homogenization under the term “Latin American art”. 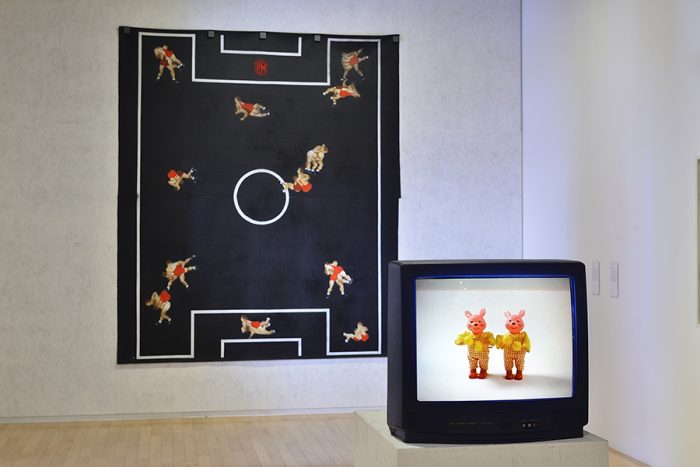 In fact, a work from the first section, Inserciones, is better achieved within the specific relationship between urban experience, popular architecture and its reinterpretation before the western canon of contemporary art. As is the case of El objeto específico “Stacks” (2012), by Oscar Abraham Pabón, a sculpture that rewrites the possibilities of minimalist sculpture to cite the architecture of self-construction and the imaginary of popular Venezuelan faith, encrypted here in statuettes of the revered Dr. José Gregorio Hernández as the works integral element.

In Mediaciones there are plenty of meaning reconfigurations about preexisting images, which depend completely on their material execution and format of presentation to establish the citation or the appropriation. Here there are well-known names and works in the contemporary art of the region: Nadín Ospina, Aziz + Cucher, Liliana Porter…

One of the few works of recent production that, in my opinion, problematizes a specific field of representation is a sculpture by Tania Pérez Córdova. In Call forwarding (2013), a white porcelain plate has a single accent as a SIM card for mobile phone. It is a juxtaposition that forces us to ask ourselves whether the coexistence between these elements can really achieve complete formal integration, and whether the nudity of a component of communication technology can represent a whole era of mediated interrelations in Latin America.

Along Portadores de sentido artistic representations based on political reflections are a constant. An example is the sculptural set of Alí González, Archivología (1995). From the Venezuelan Criminal Code, the artist asked different compatriots to swear on its pages. From the act, cutouts of the silhouette of the citizen’s hand were obtained, as well as shadow projections registered on the document. These same people were asked to leave their mark by pressing a piece of mud. The result is a sculptural group of those who still trusted the legality and strength of public institutions. A mausoleum to life in democracy.

Other works in this same line are those of Alfredo Jaar, Juan Manuel Echavarría, Amalia Pica, Carlos Motta, Raimond Chaves and Gilda Mantilla, Judi Werthein, Mario García Torres, François Bucher and Oswaldo Terreros. Of the latter it is worth noting that his gobelino, Untitled (Indígena) (2010), is part of an exercise in ideological criticism: the Revolutionary Graphic for Bourgeois Sympathizers. Terreros commissioned the elaboration of the textile among reputed indigenous artisans of Ecuador, a process of long negotiation since many of them were not interested in reproducing the artist’s design. Terreros has revealed that when, finally, a master weaver accepted the commission, the artist found out that the work was executed by a third party. Is the master here using camouflage as an anti-colonial gesture to fight appropiation? [4] 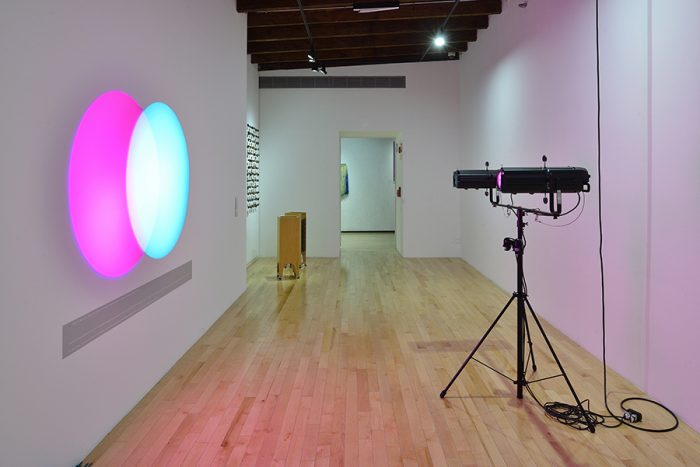 Portadores de sentido is the second exhibition of the CPPC in Mexico. In 2006, Ariel Jiménez curated Cruce de miradas, presented at the Museo del Palacio de Bellas Artes, and included 150 works from the different collections that make up the total of the collection. With Portadores the emphasis was on the collection of contemporary art, and the articulation of Sofía Hernández Chong Cuy established a dialogue with the dominant themes of the CPPC that include landscaping, documents of territorial exploration, and ethnographic objects.

From another perspective, this curatorial discourse offers two and a half decades of artistic production in Latin America during which there are recurrent themes and representation processes closely related to the tradition of visual arts and audiovisual media: sculpture, painting, applied arts, installation as expanded sculpture, drawing, photography and mono-channel video with a clear narrative structure. Only one piece integrates performance in its proposal, that of Osías Yanov. Why the omission of performance being this widely explored in the art of the region?

As well, the absence of work in digital media, electronic media and interactive nature that has also occurred in the region during the same period draws attention. Indeed, every collection has its preferences and lines of interest, but with such a wide selection of geocultural authors and origins, blind spots, gray areas, and exclusions are inevitable.

Portadores offers a contemporary version of art that, by calling it Latin American, reminds us of the constant challenge of addressing the uniqueness of the proposals based on their current production contexts, the artistic traditions that continue or those that oppose, the interest groups that constantly seek to validate or reject recent production, as well as the always complex relationship with the artistic canons of the West that are almost always established from artistic education. 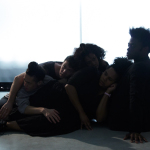 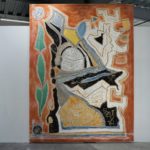 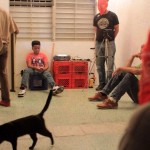 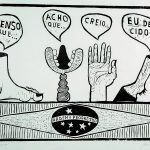