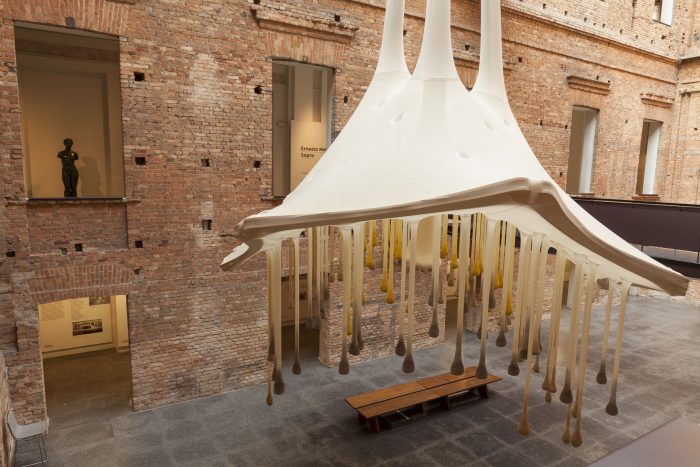 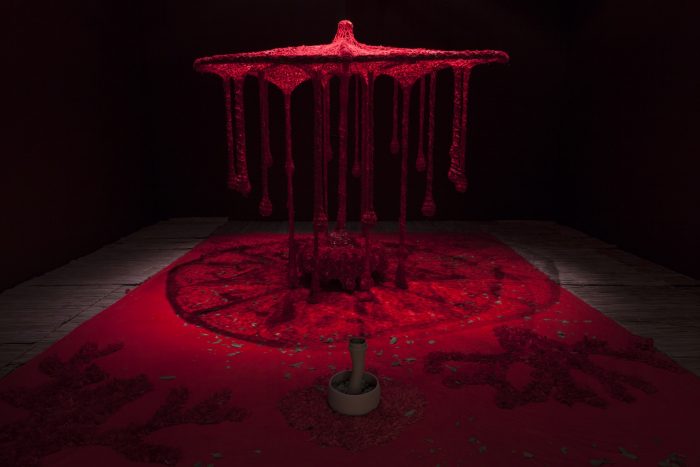 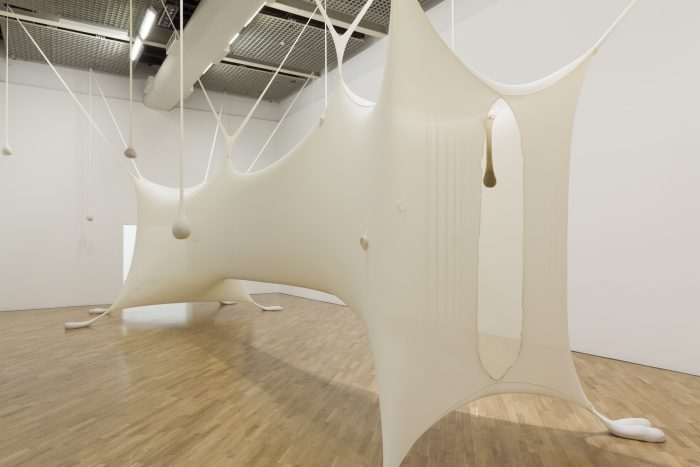 The Pinacoteca of São Paulo, a museum of the São Paulo State Secretariat of Culture and Creative Economy, and Banco Bradesco, presents the exhibition Ernesto Neto: Sopro [Blow], which will occupy the Octagon, seven rooms on the first floor and other spaces of the Pina Luz building. Curated by Jochen Volz and Valéria Piccoli, respectively director and chief-curator of the museum, the retrospective brings together 60 works by one of the most prominent names in contemporary sculpture. Since the beginning of his career, in the 1980s, the artist has been producing a body of work that sets in motion a dialogue between the exhibition space and the various dimensions of the spectator.

Bringing into play his unique comprehension of Neo-Concrete heritage, Ernesto Neto (Rio de Janeiro, 1964) unfolds his initial sculptures—elaborated from materials such as polyamide stockings, polystyrene spheres, spices and herb—into large, immersive installations that proposes to the spectator a space for conviviality, for taking a breath and for fostering consciousness and awareness. His sculptural practice is engendered by the tension embodied in textile materials and in handicraft techniques like crochet. These great ludic structures accommodate rituals and actions that reveal the artist’s current concerns: the affirmation of the body as an element that cannot be dissociated from the mind and from spirituality.

Since 2013, the artist has been engaging with the peoples of the forest, particularly the indigenous community Huni Kuin, also known as Kaxinawá. The population of this ethnic group, which now stands at 7,500 people, inhabits part of the state of Acre and makes up the largest indigenous population of the state. “The indigenous peoples of the forest have a much deeper connection to nature. In actual fact, the word ‘nature’ as something that lies outside of us human beings doesn’t even exist in this community. They cannot make sense of this separation,” observes the artist. “In living and interacting with them, I developed a profound understanding of this spirituality, of this force of continuity of the ‘body-I’ and of the ‘body-environment’, and also gained a ‘spiritual-philosophical’ structural base, in addition to an awareness that there is much humanity has yet to discover: Who are we? Where are we? Where are we heading to?” The idea of the planet as an interdependent organism permeates the greater part of Neto’s oeuvre.

For the exhibition at the Pinacoteca the artist has made a number of new works, including a piece for the Octagon. Also among the group of works being shown is a seminal piece in his trajectory: Copulônia (1989). Made up of polyamide and lead spheres, its title is a reference to “copulation” (a term employed by the artist to characterize a type of element that is present in the work in which two parts penetrate each other) and to “colony” (a section of the work where the elements repeat themselves). “It conveys the idea of population, family, collective body and symbiotic coexistence,” defines Neto.

“Copulônia marks the moment in which Neto begins to conceive sculpture no longer as a single volume, but as a whole comprised of parts. Other iconic works by the artist also make up the selection, such as those containing herbs and spices (clove, saffron, urucum [achiote]), the Naves [Ships] (textile architectures in which the visitor is invited to enter) and even the most recent inhabitable structures made out of crochet. Neto’s works invoke the visitor’s participation and activate other senses besides sight,”  explains Piccoli.

The exhibition proposes to demonstrate how physicality, the individual and the collective have always been present from the very start in the artist’s practice, shaping his poetics. His current collaboration with political and spiritual leaders of the Huni Kuin nations emerges as a natural consequence of his first sculptural research. “Neto has been radically exploring and expanding the principles of sculpture since the beginning of his trajectory. Gravity and balance, solidity and opacity, texture, color and light, symbolism and abstraction are all features that anchor his practice, in a continuous exercise in both the individual and the collective body and in community-based processes of construction,” notes Jochen Volz.

This is also the first exhibition that proposes to trace his first experimentations in this field through investigation and appropriation of the exhibition space until attaining his current social engagement. Today, at a time marked by a fundamental dissonance between man and nature, Neto proposes that art be a bridge for human reconnection with more subtle spheres. “The artist is a type of pajé (shaman or witch doctor). He deals with the subjective, with the inexplicable, with that which takes place between earth and sky, with the invisible. He is able to bring things from this place,” concludes Neto.

The show is accompanied by a catalog and is sponsored by Banco Bradesco, Escritório Mattos Filho, Veiga Filho, Marrey Jr and Quiroga Advogados, Iguatemi São Paulo and Havaianas. Ernesto Neto: Sopro [Blow] is part of the Pinacoteca’s 2019 program, dedicated to the relationship between art and society. Through its calendar of events, the institution proposes to examine the social dimensions of art practice, presenting exhibitions that redimension the idea of social sculpture, to use the term coined by the German artist and activist Joseph Beuys.