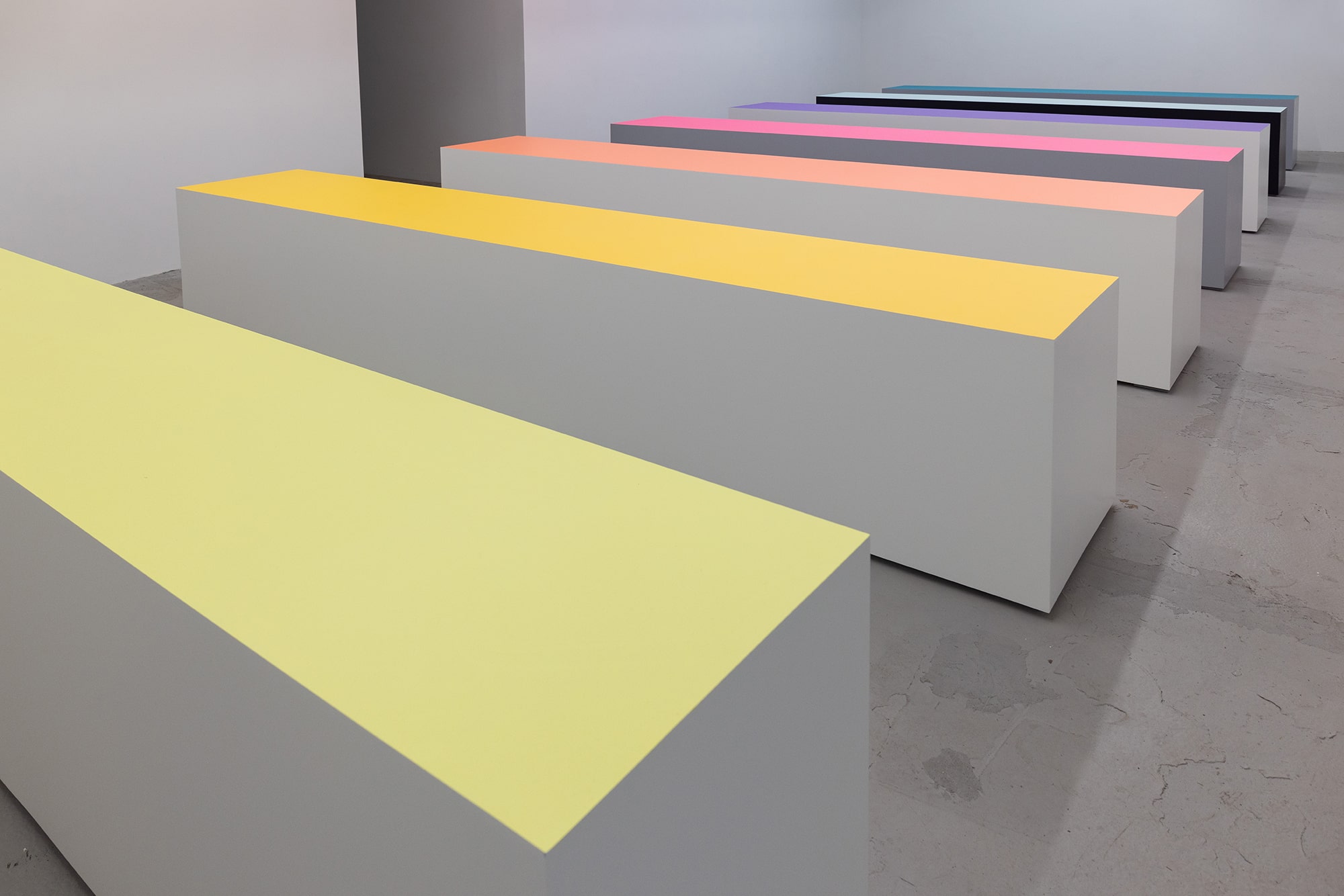 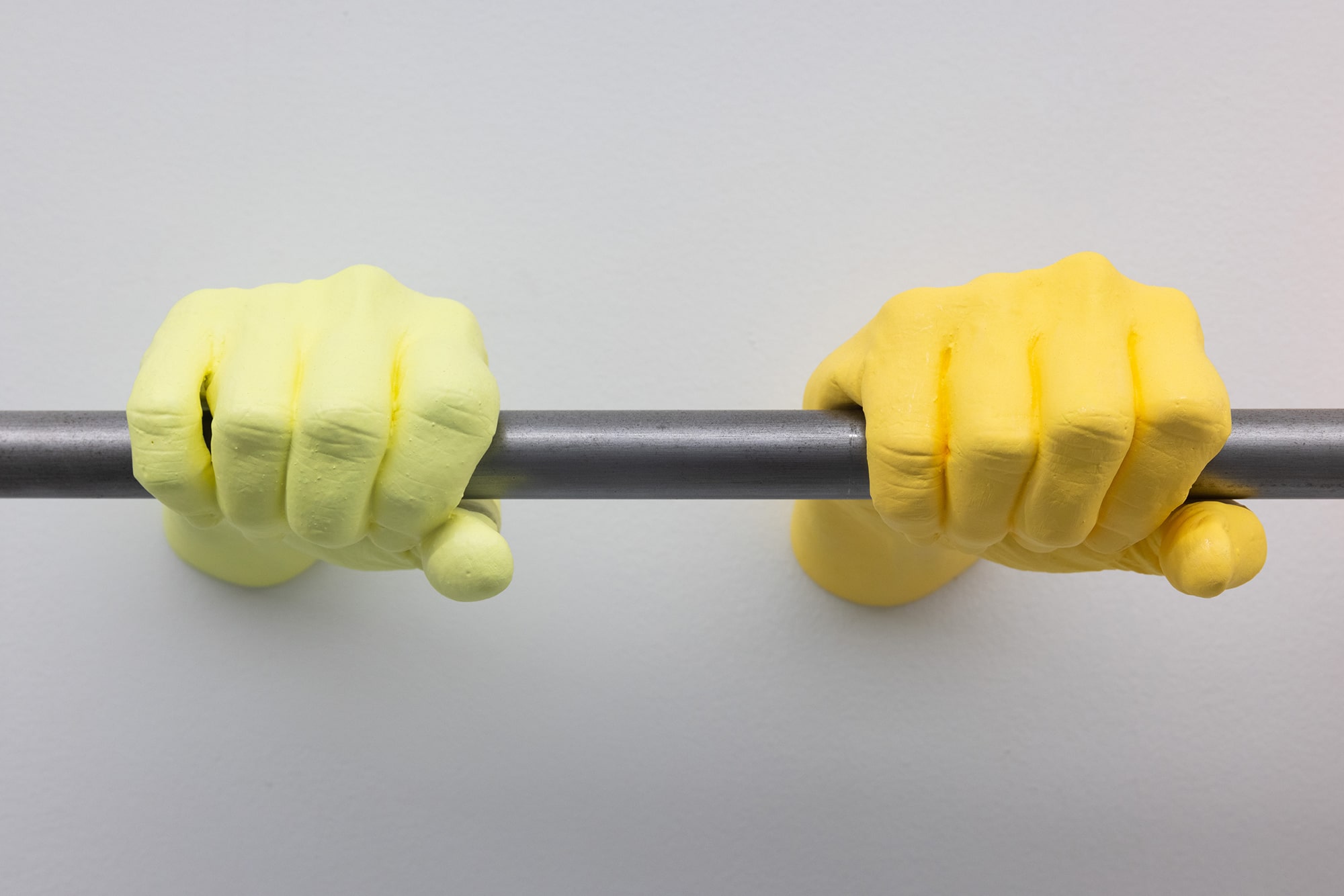 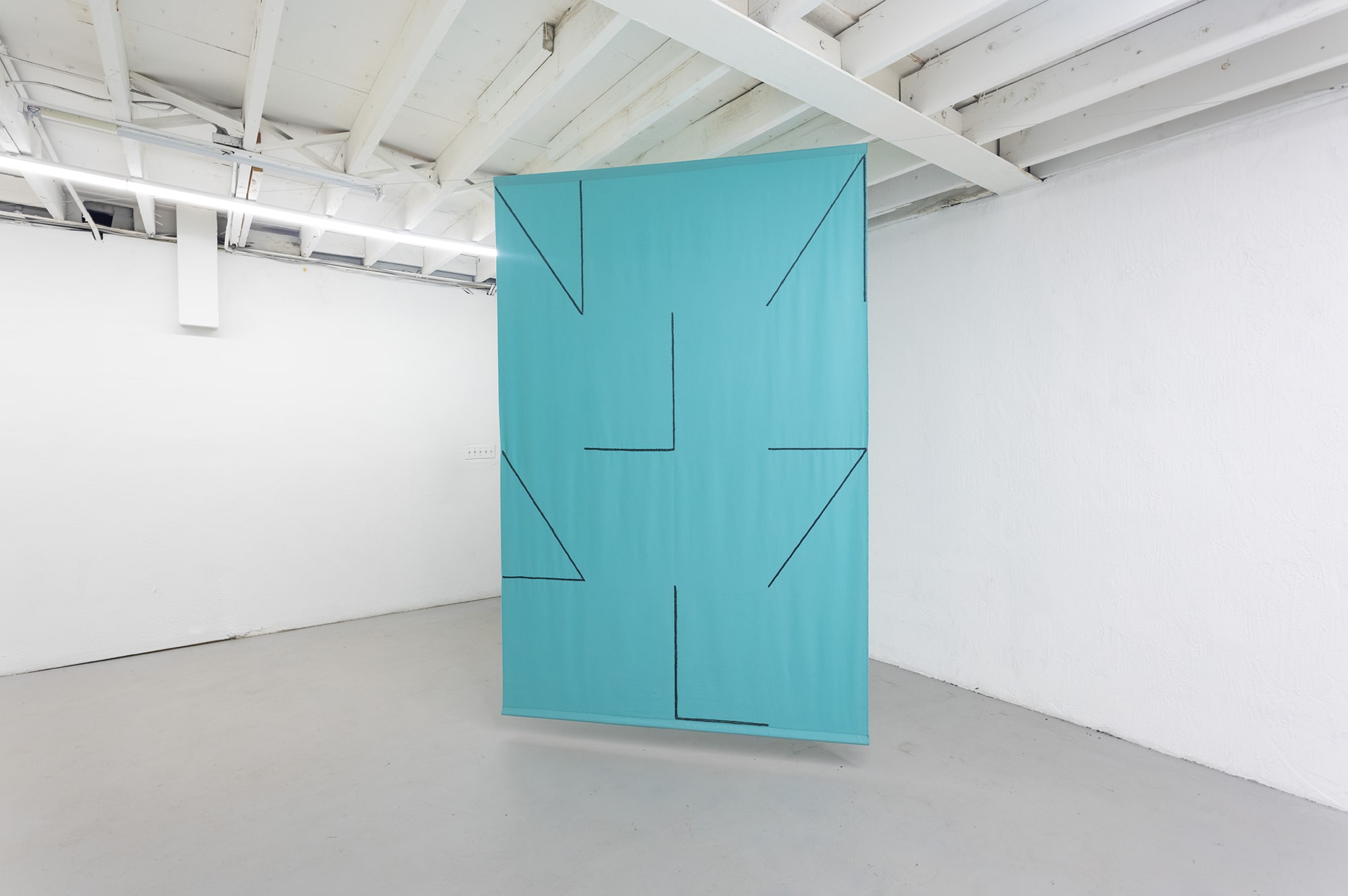 The second piece that employs this selection of colors is Unity (2021). This work consists of seven casted hands that emerge from the wall and hold together a steel bar, horizontally. The hands are impregnated with color, a condition that can cause certain perceptual indeterminacy, blurring their contour. Besides carrying a specific color, each of the seven hands is also unique in the sense that they were cast individually. This diverse group of hands gathers in a common task, holding a bar as if marking a horizon. For Alcaide, “holding the horizon” is a metaphor for maintaining stability, “to hold the sight in the horizon in order to avoid imbalance, with the senses aligned to overcome a specific moment.”

For this show, Alcaide has produced other works in which he uses casts of hands. In these pieces, the hands are white and perform several actions. In Verticality (2021), a hand is used to show the pull of gravity, by holding a piece of thread with an object tied at its bottom. The hand in Sense of Direction (2017) holds a steel frame diagonally as if suggesting forward movement or direction. In this way, Alcaide’s sculptures remark the potential of the hand to communicate, sense, measure, and interact with the world. Moreover, these hands also refer to the relevance of a tactile dimension in the process of perception and as a form of engagement with everyday life—a disposition at the core of Alcaide’s practice. Holding concrete, with its title, highlights the importance given to the haptic. The hand in Feeling the past holds a remnant of a demolished construction. The fragment still carries, in one of its sides, a smooth surface made out of mosaics, forming a regular grid. The other side is rough concrete. As such, this piece of debris seems to embody a tension often signaled by the artist in his work between (modern) ideals or rational plans and the actual and harsh material conditions and circumstances of everyday life.

Felipe Mujica will present several works of his ongoing series Curtains (begun in 2006). These pieces are made of different fabrics or textile procedures and are often exhibited hanging in different points of the exhibition space, creating a sort of new, soft architecture in the gallery. As Alcaide´s Horizon with its colored slabs, Mujica´s Curtains transform the spatial scene. Change is constant as the curtains can rotate when they interact with currents of air or with the movement of passing-by spectators. The architectonic character of his intervention speaks of the artist´s interest in radical constructive practices of the twenty-century, from International Constructivism to the School of Valparaiso in Chile, active since 1952.

Each of the Curtains carries a specific design of Mujica, belonging to a series based on the interplay of vertical, horizontal, and diagonal lines. Through the years he has amassed hundreds of these designs in a series of notebooks. Initially, it was the artist himself who tailored each of these designs in the fabrics. However, since 2012, Mujica has made of the production process of the works moments of collaboration and, on occasions, social situations. Some of the Curtains exhibited in DV were sewn only by the artist while others were produced with groups of women in Gothenburg over a period of two weeks in 2018. The artist met with them regularly to sew and socialize around the traditional Swedish fika—sharing time with friends and colleagues to have a cup of tea or coffee. Sewing, in this latter case, was done in a group whilst sharing from banal conversation to discussing common interests and concerns. In this way, this series by Mujica is similar to Alcaide´s practice regarding two aspects. Firstly, the important role that manual work has in the process of production and, second, their mutual recognition of a larger (social) horizon, a shared ground of experience.