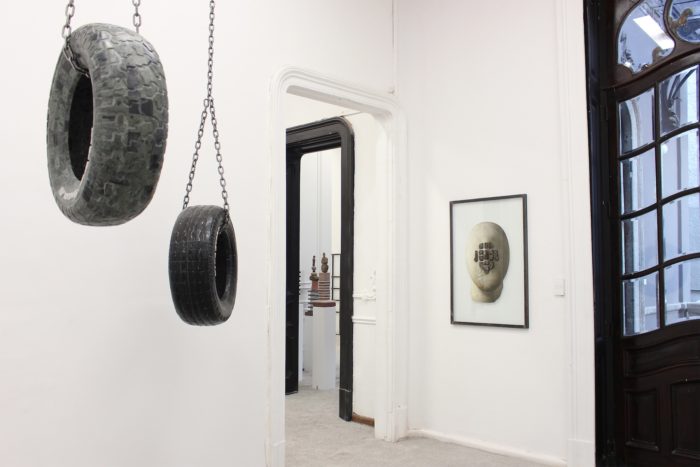 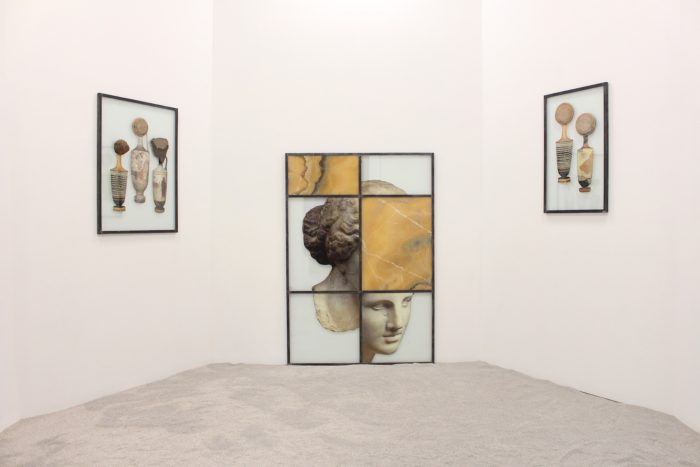 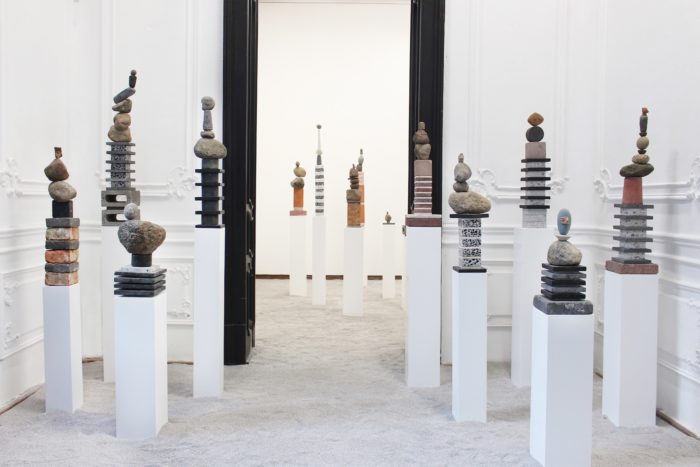 For the Phantom Legacy project, Théo Mercier has decided to tear down the old walls and ceilings of the exhibition halls of the MARSO gallery. The debris lays on the floor in the manner of a ruin. There is something of the history of the place that collapses with this act. The remains of the architectural surface of the interior are thus incorporated into the exhibition. Mercier, who also has a production in the field of performing arts, recognizes the value that certain scenographic resources can have. In this case, the rubble —seen as ruins or a kind of stratum—engages in dialogue with the pieces that compose Phantom Legacy, which deal with themes related to history, anthropology, its construction, and destruction as well as its layers and residues.

Among the ruins of the building are certain arrangements and accommodations of pieces that can recall different traditions or moments within the history of the museums and their forms of display. In the first room, entering the gallery, there is a series of conventional white bases. On display are a set of rock sculptures made by Mercier, pieces, and fragments of ceramics, different types of building bricks and reproductions of archaeological objects sold in different markets as if they were authentic. Each piece is a mixture of purchased or acquired items, natural or handcrafted. Characterized by a tendency towards verticality, this group of sculptures —each with different heights— articulates a kind of urban aspect, as if it was a landscape with towers that refers to the space of the city where the majority of these items were found.

This monolith room with rubble-filled floor can easily bring to mind the arrangement of pieces inside an archaeological museum or dedicated to anthropology. The materials that Mercier has selected for the production of this set of sculptures have an archaic appearance, reminiscent of pre-Hispanic or Cycladic works of art to which he has referred in previous projects. This aspect is preserved even though it is evident that some of the elements that compose them, such as the bricks, are of contemporary production. Thus, in these works, different temporalities seem to collapse into an object of ancient appearance. Mercier has lifted each sculpture from an assembly of objects that moves vertically as if they were menhirs or totems. The pieces tend to manifest a kind of precarious balance as if they could be totally demolished with a sudden movement or the slightest impact. Here, the artist resorts to a contemporary sculptural solution that merges, again, into the archaic appearance of the pieces. This record, in which the old collapses with the current, keeps a commentary present on the work of the artist about the construction of history. With its emphasis on the precarious balance of the pieces, which simultaneously deals with the facility of that construction to be destroyed or crumbled down into pieces.

In each sculpture, in particular, Mercier operates a similar strategy in which different temporalities seem to be synthesized in a single time, thus questioning the languages associated to the ancient, the modern and the contemporary as well as to art and archeology. Each piece is highly suggestive in this regard. Occasionally, the works have obvious anthropomorphic references such as the incorporation of a false prehispanic mask or the indication of parts of the body through the use of rocks or other elements. Other works may refer to modern art solutions —evoking some examples of the production of Joan Miró, Hans Arp or Alexander Calder— or they may also resemble the most popular forms and assemblies of postmodern design emblematized in the work of the Memphis Milano group. In all these cases, Mercier takes advantage and works with the suggestive forms of some of the materials used, such as stones. By grouping them in a certain way, they may appear to be sophisticated jars or containers, and even to articulate certain types of scenes, as in the case of Archaic Suicide, a sculpture in which it seems that an anthropomorphic form is on the edge of the highest point of a mineral structure facing the cliff. The limit of the balance present in this piece is consonant with the stability that is at stake in the totality of the pieces that occupy this first room.

In other parts of the rooms that Phantom Legacy occupies, Mercier has arranged a pair of Good-Year and Firestone tires coated with different minerals, such as obsidian. For the elaboration of these pieces, the artist worked with a person dedicated to the production of false prehispanic objects that are sold assiduously in Mexico City markets. The rims have a coating made with fragments of stone in the manner of certain pieces of pre-Columbian art, such as the mask of the Aztec god, Tezcatlipoca, which is part of the British Museum collection and consisting of a skull covered with pieces of turquoise, lignite and red shell. Again, Mercier collapses different temporalities in these pieces, as well as processes of industrial production with methods of artisan production. If these parts were devoid of the brands names of the companies that manufacture the tires, they could very easily refer to certain pre-Hispanic objects and compare, for example, to the ball game’s score rings. The presence of the names of the brands, however, also leads to give other meanings to the pieces. When these names are translated from English, they become objects that announce good omens or even point out mystical objects, such as the stone of fire.

In another room of the gallery, Mercier has arranged a series of two-dimensional works made with window metalwork and images from the magazine Chefs-d’oeuvre de l’art published in France in the 1960s, together with different stones and minerals. The artist had already resorted to these images in previous projects (Chefs-d’oeuvre de l’art, 2016). On this occasion, there is a variation. Originally the photographs of these pieces, designated as masterpieces of universal art according to the publication, were printed on solid colored backgrounds, something that the artist related to the prevailing pop aesthetics during those years. For these new pieces, he has trimmed the works in order to eliminate the background and mounted them between two glasses. The new solution rescues the sculptural nature of the photographed pieces. This quality is emphasized with the incorporation of fragments of tiles and stones on the glass, in consonance with the materiality of the images. The strength of these elements contrasts with the fragility of the glass and articulates a set of layers on the piece that resonates with the display strategy used by Mercier to cover the floor of the gallery with the debris of its walls and ceiling.

If the first room of Phantom Legacy could refer to a room of monoliths inside an anthropological or archaeological museum, this space that presents these two-dimensional pieces emulates a kind of painting hall through its hanging. Whereas the works he did in 2016 from the magazine Chefs-d’oeuvre de l’art resonated with the aesthetics of pop, this time the new works can be associated with certain solutions close to neoplasticism. The metalwork of the windows used as frames and supports, obviously, plays a crucial role in this when conforming, sometimes, geometric reticles. Beyond this reference to the history of avant-garde painting there is an evident relationship with architecture and in particular with modern Mexican architecture. Mercier includes different minerals, among them alabaster, like elements that occupy segments of the reticule traced by the metalwork. In addition to the pictorial qualities that this type of materials can bring to the pieces, this solution recalls some gestures of modern Mexican architecture. An example would be the Central Library of Ciudad Universitaria (1953), in which Juan O’Gorman used alabaster as a highly ornamental element. Mercier’s work can be related to this work of the Mexican architect in which, although he sought to formulate a new architecture, he did not fail to revisit the past and history as constituent parts of the present.

Undoubtedly, the metalwork of the windows hung in this space contributes to the ruined appearance of the gallery as a whole, which, as a great installation, Mercier has used to give unity to Phantom Legacy—as if they were parts of the house that also have been dismantled. In this project, the fragment and its conception of ruin are used to create sculptures, two-dimensional works, three-dimensional collages emulating different forms or traditions of exhibition within the history of museums and galleries. Mercier’s work uses them to demonstrate a kind of artificiality at play in the construction of history and, simultaneously, to point out the fragility of it. In the same way, in the pieces and the backgrounds that comprise Phantom Legacy, different temporalities collapse in a single time questioning what is understood by contemporary or current, emphasizing the presence and interference of the past in the everyday. It is worth mentioning that these comments have the peculiarity of being marked by a particular humor, visible in pieces like Archaic Suicide and even in the title of this show. A humor that questions conventional expectations, in this case, of the gallery space, the history, past and present. All of this here seen through humor emanates and explodes. 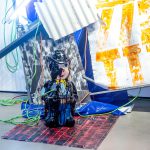 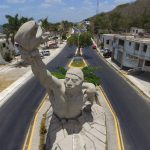 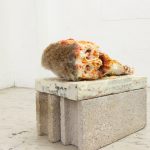 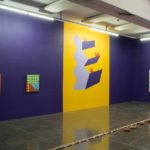