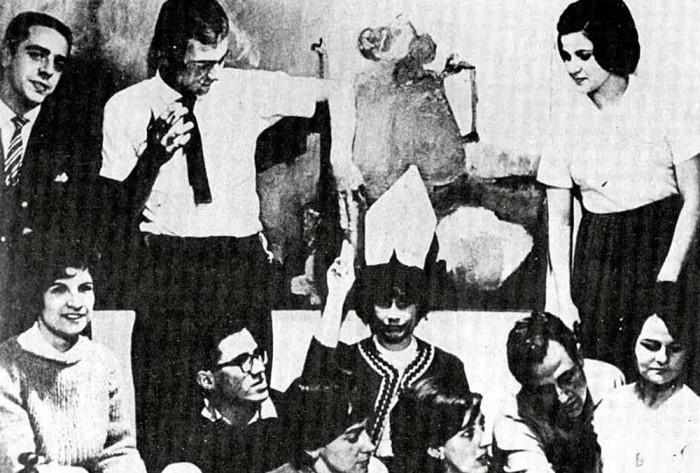 Marta Traba, with Antonio Roda, María Teresa Guerrero, Camila Loboguerrero, Luis Caballero and other students, as Luciano Jaramillo crowns her as “The female pope” of art in Colombia (1962)

In 1968, the University of the Andes School of the Arts, at Bogotá, appeared to have freed itself from the conception that originated it, in 1954, when the idea of offering aesthetic stimulation to the city’s upper-crust young women, who were then taking private “lessons” in home artisanal skills, reached the ears of Mario Laserna, its rector and founder. The first Arts Workshop bore the name “Women’s Section” and met in the former laundry of what had once been a women’s prison, as well as in the area that once housed an asylum for female mental patients under the care of holy sisters.

The director of this new “Women’s Section” was Hena Rodríguez, who had subsided since the 1940s on offering private classes to the inmates of the Bogotá elite’s social prison. Rodríguez was one of few women in the 1930s who had contravened the norms of polite creole society; to wit, that a woman must not travel alone, or study, much less frequent the company of other women for the purpose of intellectual converse, or wear slacks instead of a skirt. She was the only woman to form part of the Bachué Group, an avant-garde art organization. Now the artist seemed removed from those youthful vicissitudes. “The orientation I provided to the Faculty was that the first two or three years should be academic—as I believe all fine arts study ought to be—and in the last two years, students should do independent—though naturally, supervised—studies, in order to have complete freedom to produce modern art in the way they see fit. I do not believe one can reach the summit of modern art without academic or classical bases.”

It was said “society girls” attended the school to “marry well” and indeed some brilliant matches between fine lineages were made there. The opposite, but symmetrical variation, was that of painter Fernando Botero when he demonstrated professors, talented though penniless they might be, could also strike advantageous alliances when he contracted matrimony with a student, Gloria Zea, the daughter of a top-tier member of the government at that time.

Despite the Women’s Section’s artisanal and conservative vocation, from 1956 on, the presence of the Argentine writer and critic Marta Traba reinforced women’s demand for rights. “Marta was a rabble-rouser. She showed us a different, contemporary art, in a quite amenable way. She not only spoke to us of painting in her classes, but showed us Colombian films such as Pinto’s, that had just come in from Paris; or pictures by Pacho Norden like Camilo, el cura guerrillero. We also began to see work from the Nouvelle Vague. She spoke to us of theatre, of politics, and so she was in that sense the Great Teacher,” Camila Loboguerrero, a student who took her classes in the 60s, recalls. That said, the atmosphere at the school was still reserved. Most of the alumnae yawned in Traba’s classes—Sleeping Beauties of predestined, predictable dreams.

Few students in the “Women’s Section” really planned to be artists and even fewer finished their degrees. “My class was ninety and in the end only six of us graduated,” Beatriz González remembers, owning “I didn’t really want to be an artist—it seemed like a really bad idea. One was looking for something else. I wanted to do advertising illustration and go back to Bucaramanga and start an ad agency.” The first and practically only man who dared start studying art in the “Women’s Section” was Luis Caballero. He came in and made a couple of good friends but preferred a change of scenery and went to Europe. 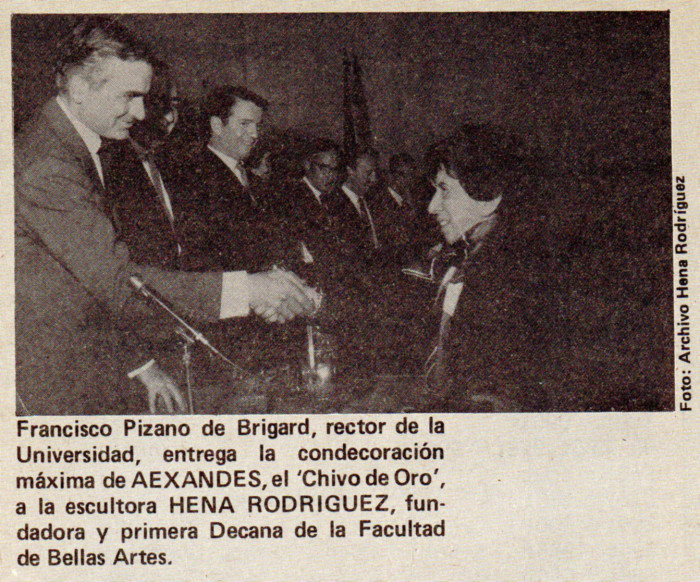 Things had changed in 1968. They forced Hena Rodríguez into retirement and gave her the Chivo de Oro award, the university alumni organization’s highest honor. Since 1961 the School of Fine Arts had been under the direction of Spanish-born artist Juan Antonio Roda, himself as cosmopolitan as Marta Traba. His status as a foreigner was enough to make him feel different, ignore the family and ideological connections of an incestuous capital-city culture and make a radical transformation alongside a varied and growing group of faculty and students. Roda broke all the old covenants of inherited academicism and encouraged an atmosphere of academic liberality, creating winsome relationships of trust that deemphasized hierarchies.

In 1962, Roda changed the general curriculum to emphasize workshop-based classes as the central feature each semester, at a higher credit value. He eliminated some courses, better coordinated and tightened up the courses that were to center on the workshops, and charted some pathways whose plans were never realized: hiring more faculty at stable salaries, the creation of a publishing arm to specialize in graphics, a publishing imprint in collaboration with other universities and cultural institutions, and the construction of workshop spaces with technical experts and in partnership with artisans’ foundations. 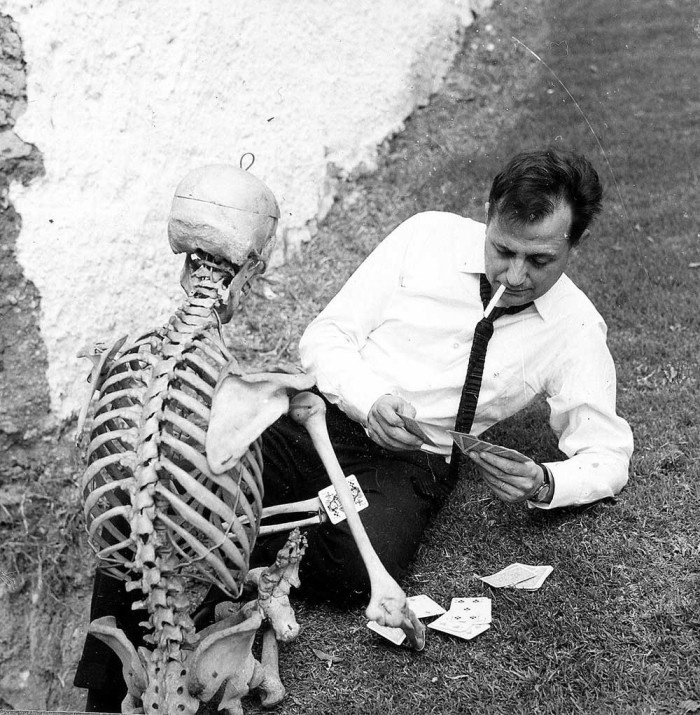 This atmosphere was not only propitious for art and other skills; it turned out to be for politics as well. The University of the Andes was especially favorable to the development of small student Marxist and particularly Maoist cells as well as groups influenced by German-Jewish thinker Herbert Marcuse, a major youth-protest figure worldwide. The presence of the Movimiento Obrero Independiente y Revolucionario (MOÍR) was notorious in the Arts School, as was that of Juventud Patriótica (JUPA), communist in origin, and charged with driving the ideological and cultural struggle as part of the campus political revolution. 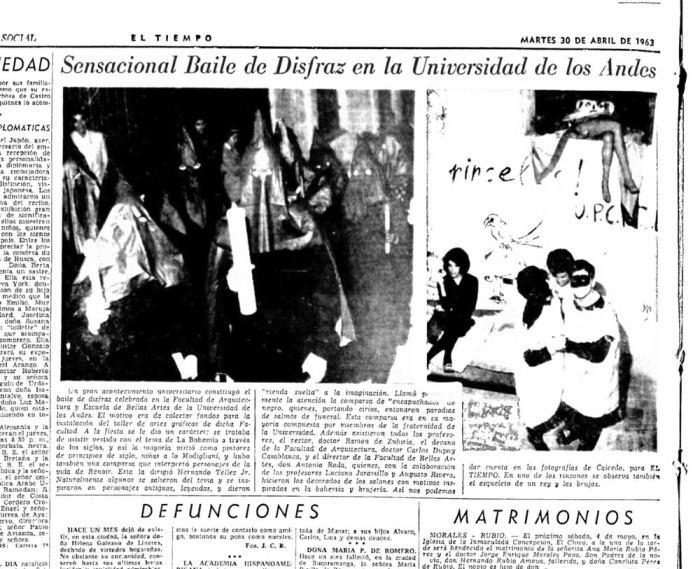 “Every week on the grounds of the El Campito former women’s insane asylum, the era’s filmic New Testament, Battleship Potemkin, was presented, along with Earth and a depressing follow-up of Cuban and Vietnamese short subjects. The usefulness of Trotsky’s assassination was debated, the Paris Commune was evaluated, Che Guevara’s hairstyle and the poet Mao Tse-Tung were imitated; soft drink or water consumption was recommended with every joint and pacifism grew increasingly bellicose,” says architect and university professor Germán Téllez. “The students demonstrated their solidarity with the causes of Los Andes U’s poorly paid employees; nice college-boys and -girls realized the same class conflicts they spent so much school time discussing were being reproduced within the university,” adds Raúl Cristo Ancho, an activist and infiltrator who, alongside Pedro Manrique Figueroa*, founded the Asociación Comunista de Artistas (the ACA), which operated out of a small circus tent set up in a lot near the university in the safety of the Monserrate foothills.

The School of Fine Arts, despite not being the sole focus of protest and revolution at the university, became one of its most visible because of its own leanings and the expressive tools it had on hand. Mass protests began in 1968 with a sit-in on the steps to the university entrance. During the so-called “stairs coup” against a tuition hike, there were presentations from the Theater Group, poster and placard designs, bulletin boards, small-scale musical improvisations and the famous happenings, in which artists played a major role.

Those protests were the first shakeup for university administrators accustomed to a sensible and intellectually striving student body, fond of feverish enthusiasms but rather lukewarm—even cool—when it came time to take political action. The 1970 protests extended from internal issues and tuition to other causes: defense of the public university, a rejection of military repression, demands for greater university autonomy and denunciations of US meddling.

University authorities feared this belligerent focus might end up “spreading communism” to students uninvolved in the protests. During winter break 1971, then university rector Álvaro Salgado, announced an end to new Fine Arts admissions though he committed to each enrolled student’s graduation. The Centro Uniandino de Capacitación Obrera (CUCO), also closed; the Theatre Group leader left the university in favor of staging happenings with clear political engagement. As for the Grupo de Acción Comunal, a decision was made to paralyze it through a failure to advocate resources. It is said that the stirring slogan that one morning the university found plastered all over campus—loosely translated, “Los Andes: facing Monserrate with its back to the nation”—was the work of JUPA members who had been infiltrated by CUCO students who had themselves been penetrated by the ACA. 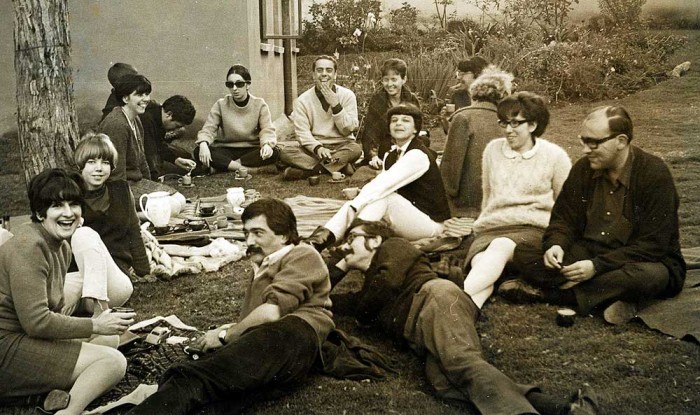 Group of professors of the Art School, 1969

The Academic Board reiterated its policy that the educational experience ought to have no political orientation. Reactions were swift. The Dean of Faculty, Ernesto Jiménez, tendered his resignation. Almost forty art school professors and researchers—including a number of artists and including the school director himself, Antonio Roda—met in General Assembly on 2 July 1971 and sent an open letter to the rector and the Board of Directors as well as the press, criticizing university administrative policy.

Five days later, and after receiving a letter from students in support of their professors, the Chairman of the Board, businessman Hernán Echavarría, responded to the missive with another, which he published in the newspaper El Tiempo. “We lament you have moved to make your grievances public, which contravenes one of Los Andes’s most patent traditions; to wit, internally handling the natural differences that come up in university life.” Echavarría, alongside other board members (as always, made up of men with connections to industry and trade), offered up additional arguments to explain closing the School of Fine Arts. “The program employs thirteen faculty members that lecture at 32 courses for the School’s 38 students. From 1964 to date (1971), thirty MFA students have graduated […] faced with grave, highly challenging urban-growth problems, priority must be lent to study programs that tend to offer cogent solutions for the nation’s development.”

University Administration’s numeric feint was fallacious. Art courses benefit 38 students but also 519 others from other majors that were supplementing their training with art classes. During the first semester 1971, 172 students from other university faculties and departments attended the Art History course. 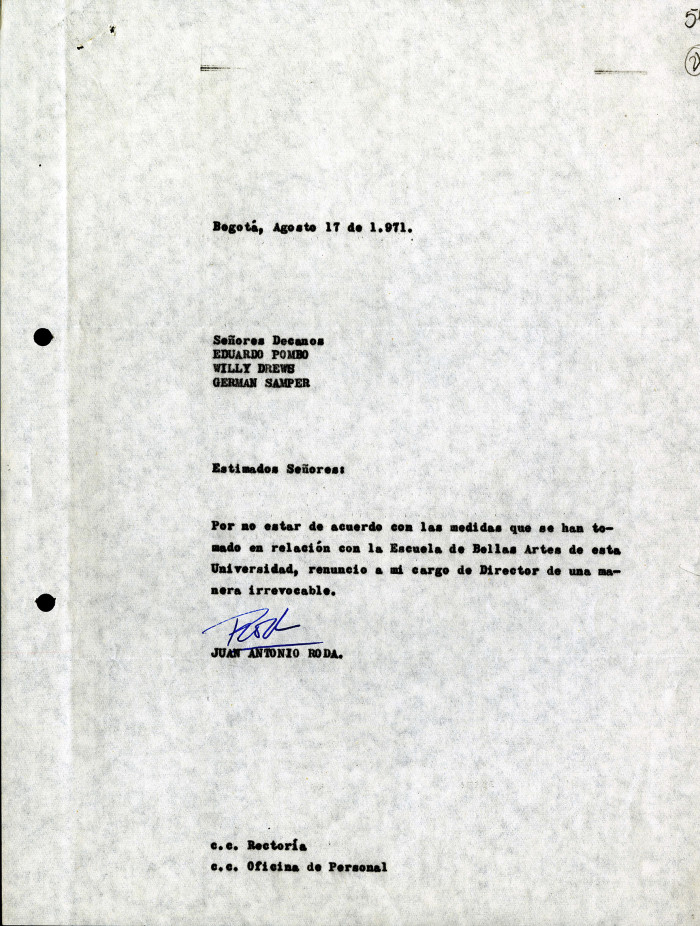 The School of Fine Arts soldiered on with its activities, but its death knell gave rise to internal divisions. Some professors blamed Roda for the situation, for having signed the letter and years previously rejected an offer to separate the school from the university and move it to the north of the city, to an atmosphere more amenable for art and the rest of the institution. A reconstruction of faculty meeting minutes includes a compendium of choice remarks aimed at the Director. “Being Director is a position of service, not a platform for prosecuting personal causes;” “we do not feel represented by you;” “you are intransigent;” “exhausted;” “your criticisms ought not to go beyond your position as a professor or director;” “your administration is polarizing.” In August 1971, Roda sent a letter to university administrators. “Opposed to measures you have taken in relation to this university’s School of Fine Arts, I irrevocably resign my post as Director.”

The last student received his degree in 1974; and up to that day the last member of the Arts faculty was able to justify his stay at the university. The last graduating student was Margarita Monsalve, whose thesis was a series of engravings. She had to delay handing in her final work two times because the drum on her printing press was stolen; after replacing it with a used part, it was stolen again. It is said Pedro Manrique Figueroa was behind the thefts. As an ACA infiltrator, he sought to motivate art students not to graduate and thus put off the closing that drove art out of the University of the Andes. 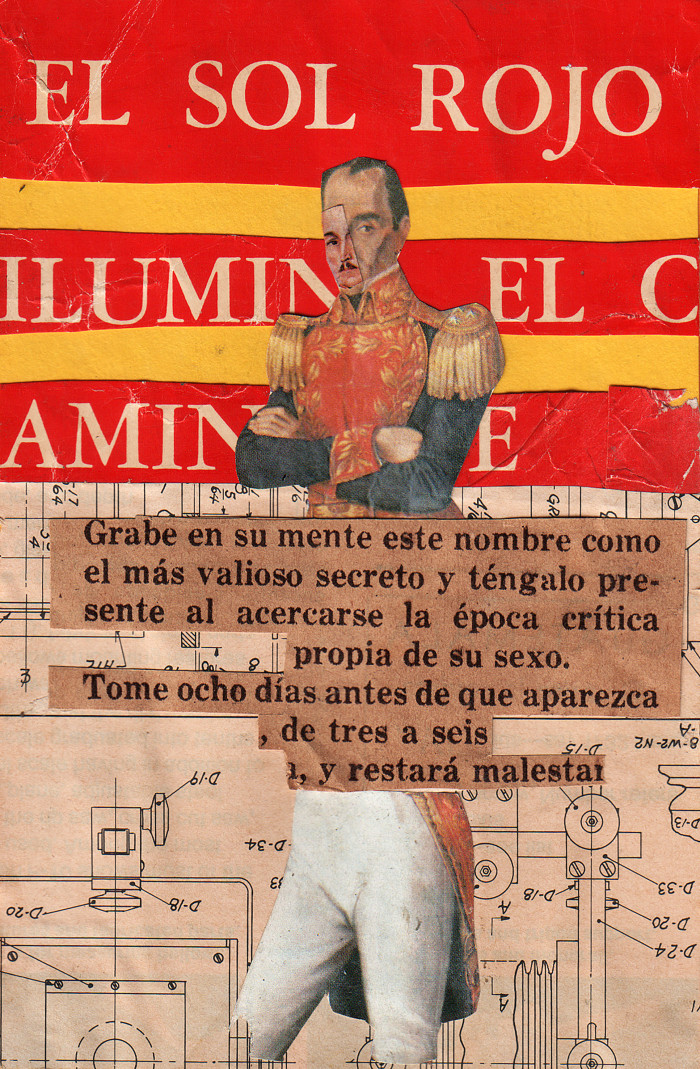 * A precursor to Collage in Colombia. LISTE — The international leading fair for new discoveries in contemporary art, presenting the latest developments by young artists and galleries 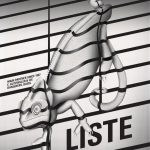 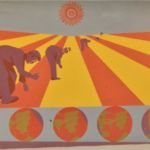 Martín Ramírez. His Life in Pictures, Another Interpretation, at ICA, Los Angeles 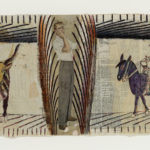