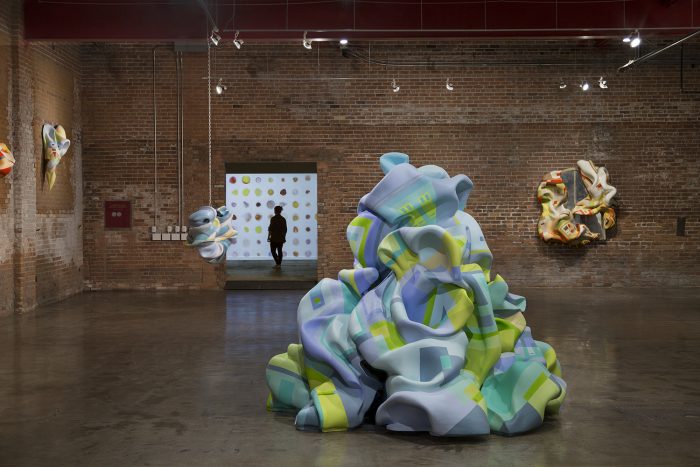 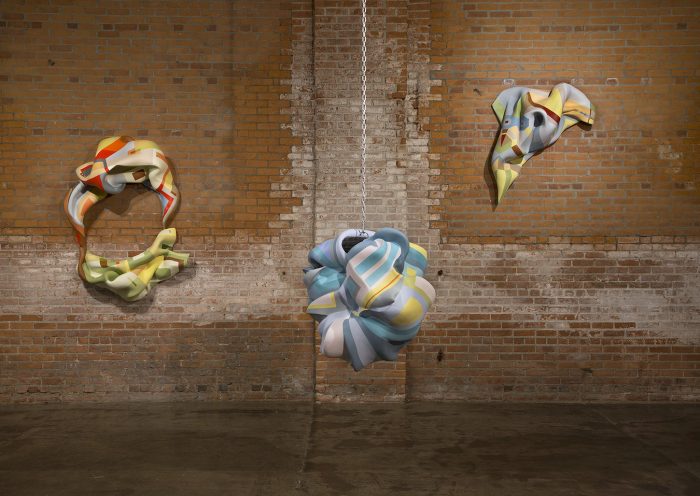 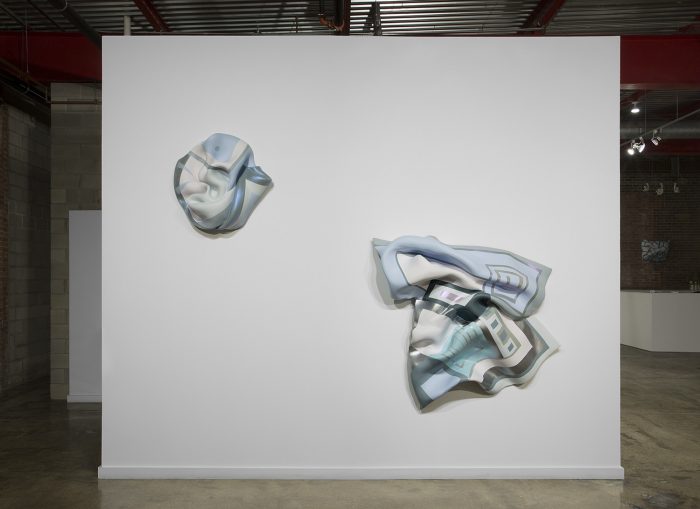 Wasserman Projects presents The Return of Coatlicue, an exhibition of new work by the Mexican-American artist Marela Zacarias. Trained as a muralist, Zacarias is now recognized for her site-specific practice of merging sculpture and painting into works that are informed by her research into the history of a place. For her exhibition at Wasserman Projects, Zacarias takes particular inspiration from Detroit’s urban landscape and its renowned murals by Diego Rivera to create a series of wall-mounted sculptural reliefs and freestanding sculptures. The Return of Coatlicue is presented alongside Speculations, a focused exhibition of multimedia works by the French-American artist Sarah Meyohas. Both exhibitions are on view through December 15, 2018.

The Brooklyn and Mexico City-based Zacarias first became captivated by murals during her studies, recognizing their dynamic role as vehicles of social change and figurative representations of history and social struggles. This led to a broader interest in the history and experience of place that continues to play a critical role in her practice. Although Zacarias initially began her career in traditional mural-making, she quickly developed her own distinct formal vocabulary that emphasized the emotional resonance of fluid and colorful gestures and the melding of sculpture and painting into a single inextricable whole. To create her works, Zacarias shapes and layers mesh and plaster into dynamic organic forms, which she then paints in vibrant colors and patterns. Affixed to the walls, the sculptural compositions appear unexpectedly light and soft, seemingly undulating against and away from the wall. The resulting effect is a kind of three-dimensional mural that evokes the aura of particular places, landmarks, and city sights.

The invitation to show at Wasserman Projects offered Zacarias a particularly compelling opportunity, as she had long-admired Diego Rivera’s Detroit Industry Murals—housed at the Detroit Institute of Arts—and been interested in exploring the works more thoroughly through her own practice. The Return of Coatlicue encapsulates Zacarias’s deeply personal engagement with Rivera’s work—which first began when she researched the Mexican Mural Movement as a student—and is further inspired by some of the Aztec mythology depicted in his Detroit murals, in particular the goddess Coatlicue, who symbolizes constant growth, destruction, and rebirth. Drawing on Rivera’s palette and the dynamism of his work, Zacarias transforms his figurative works into an energetic abstract landscape, including both wall reliefs and freestanding sculptures. Hints of Detroit’s famous skyscrapers, including the Fisher and Guardian Buildings, are also woven into the work, grounding it further in artistic and cultural heritage of the city. Presented in Wasserman Project’s industrial space, the wall-works, which occupy a wide expanse, fill the gallery with vivid color.

While Detroit’s art and design legacy serves as an important theme in the exhibition, Zacarias was equally inspired by the creative energy and sense of resolve that fuels the city today. Her experience in connecting with other Detroit-based artists and exploring the city’s less-traveled neighborhoods led to a new body of sculptures. For these works, Zacarias uses found humble materials, such as milk crates, window frames, and tires, to construct a sculptural core. She then encases these structures in mesh and plaster, further abstracting the original form, and paints them. The final works appear as swaths of colorful billowing fabrics, suspended from the ceiling and anchored at the center of the gallery. Taken together with the wall-works, the sculptures appear as though they have separated from the wall, further creating a sense of active motion. Through these works, Zacarias captures the spirit of Detroit’s distinct artistic history and its continued position as a hub for creativity and innovation—in ways speaking to the city as a manifestation of Coatlicue herself.

Concurrent to The Return of Coatlicue, Wasserman Projects also presents Speculations, a focused exhibition of new and recent works by New York City-based multidisciplinary artist Sarah Meyohas, known for her visual explorations of networks of information, power, and value. The exhibition will include four photographs taken from the artist’s Speculations series, for which the exhibition is named. To create the images, Meyohas carefully arranges a selection of props, two-way mirrors, her own body, and the camera. The compositions result in photographs that suggest infinite reflections and repetitions, and that abstract and confuse the original vignettes. The works toy with ideas of reality and replication, inviting questions about whether our experiences of an image are more real than those of the objects they portray. The photographs are accompanied by a new video installation developed from Meyohas’s recent project Cloud of Petals, which resulted in the creation of an artificial intelligence algorithm that learned to generate an infinite number of unique petals. The video, screened in the rear gallery, will feature various arrangement of petals generated by a computer algorithm.

“Although their practices are distinctly different, I was struck by how similarly both Zacarias and Meyohas use layering to reflect on changing societal structures,” said Alison Wong, Wasserman Projects’ Director and curator of both exhibitions. “Zacarias’s practice is characterized by a meticulous process of repeated layering to create sculptural forms, while Meyohas’s work often suggests seemingly infinite layers or possibilities. Showing their work together creates a conceptual dialogue between the two artists about the successes and failures of our histories and how we define progress.”