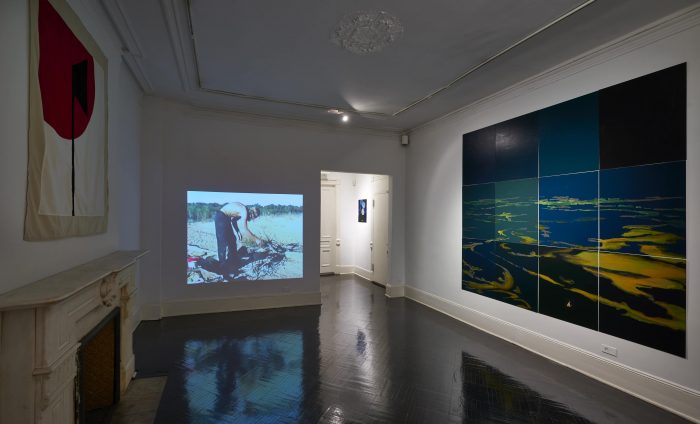 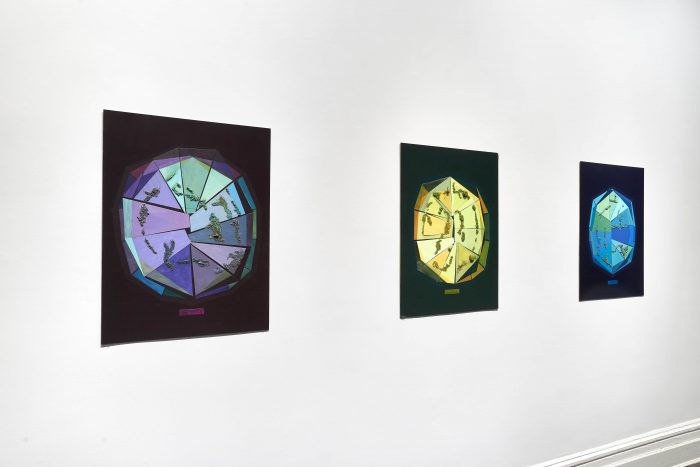 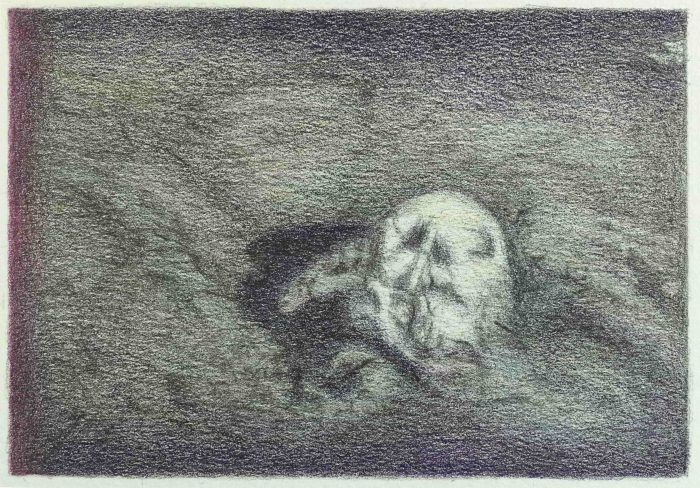 Henrique Faria Fine Art is pleased to present Misky Mayu, the first exhibition of the artist duo Zinny Maidagan in the gallery. This exhibition is based around the video work of the same title, which is the Quechua name for the Río Dulce in Argentina’s northern province of Santiago del Estero. The video was taken during a three-month long adventure that Maidagan took in 1990, during which he attempted to run the course of the river in a small raft and documented the landscape and the people he met along the way. The video will be presented in conjunction with paintings, works on paper and a textile installation, whose images have been derived and abstracted from scenes from the footage. As Mónica Amor writes in the exhibition text, “Known for installations that generally combine collage, drawing, fabric pieces, text, architectural interventions, diagrams and research, [Zinny Maidagan] are also recognized for juxtaposing their characteristically abstract work and the literary sources that inspire them. Here, form dominates but is never autonomous; it is instead supplemental to an interdisciplinary endeavor that is unhinged from the specificity of a medium.”

This multifaceted approach to art making also suggests how Zinny Maidagan blur the lines between abstraction and realism, even within the artworks themselves. While the video purports to document the experiences Maidagan had during his voyage, its six-hour loop challenges traditional viewing capacities as it stretches onwards like a never-ending horizon. In the accompanying works, such as the mixed media painting Manga Pozo (2019) and the colored pencil and graphite drawing Misky Mayu – Still – Rancho de Belén (2019) by Zinny, while taken directly from stills of the video, their transmission by hand “recall[s] the impressionistic renditions of those traveling artists that accompanied the exploratory European expeditions [of Latin America in] the 19th century.” Other diptychs from the separate Word for Word series pair quotes from Borges and Faulkner, both in their original languages and translated to English and Spanish, with scenes of palm fronds blowing in the wind and flooded roads. Although it is mentioned in the titles of the works, it is up to the viewer to find the discrepancies in the translations and the differing details in the scenes portrayed. By transferring visual data from the original stimuli to film and then from film onto panel and paper, and through the translations of languages and images, Zinny Maidagan explore and expose the unintended gaps in the communication of knowledge, the pursuit of aesthetics and, ultimately, the creation of artifice.

This deliberate obscuration, or mistranslation, of information through design stands in contrast to Modernist and Constructivist design theories, which posit that design and its surrounding environment should be in a harmonious relationship. As Amor references the Argentine designer Tomás Maldonado in his 1970 treatise Design, Nature, Revolution. Toward A Critical Ecology, “the literary and artistic description of the ‘human environment,’ [carries] out the delicate operation of transforming a philosophical notion into a fact of sensibility, a scientific construct into a fact of perception”. This basis for environmental transformation and preference for sensual receptiveness provides theoretical context for Zinny Maidagan’s creative process and demonstrates their working methods. However, as Amor warns, this anthropocentric view should not necessarily be interpreted as validating and celebratory, it should serve as stark reminder of the power we hold in relationship to our environment and that it can be wielded to a positive or negative effect.

Dolores Zinny (Rosario, Argentina, 1968) and Juan Maidagan (Rosario, Argentina, 1957) are an artist duo well known for their large-scale public art installations, including a 16-foot bronze sculpture Ebbinghaus Vergessenskurve (Forgetting Curve, 2013) for the Fulda University of Applied Sciences, another large bronze sculpture titled Hippocampus (2016) for Goethe-Univerität, Frankfurt, and a large-scale treatment for LACMA’s façade for the exhibition A Universal History of Infamy, as part of Pacific Standard Time LA/LA in 2017. The two began collaborating in 1990, upon founding a performance space called MIMI in Rosario for poetry and visual arts. The duo’s first performance/installation Moldes 1, 1992 was held there. Following their debut, Zinny and Maidagan created two large-scale works, Acto de autores (1993) in the Museo Castagnino, Rosario and 27 de Marzo (1994) in the CCB Rivadavia, Rosario. The artists continued honing their craft by participating in the Independent Study Program (ISP) at the Whitney Museum in 1995. That same year, the artists were also awarded the International Artists’ Residency from Art OMI and the 35th Anniversary Fellowship from the Fondo Nacional de las Artes in Argentina. Their first solo show outside of Argentina was in 1999 at the New Museum in New York City. Other notable solo shows of theirs have been at the Fundación PROA, Buenos Aires, 2016; CAC Gallery at University of California, Irvine, 2013; Museum für Moderne Kunst, Frankfurt, 2009; The Showroom, London, 2003; Moderna Museet, Stockholm, (2000); Artists Space, New York, 2000 and Museo Rufino Tamayo, Mexico City, 2000. Their work has been acquired by the Museum of Modern Art (MMK), Frankfurt; Museum of Contemporary Art, Siegen; Bankhaus Spängler, Linz; Moderna Museet, Stockholm; Daimler Chrysler Collection, Berlin; Kunstsammlung Europaisches Patentamt, München; The Federal Republic of Germany’s Contemporary Art Collection, Los Angeles County Museum of Art, and more. The artists have also participated in the 1st Cartagena Biennial, 2014; the 8th Gwangju Biennial, 2011; the 5th Berlin Biennale, 2008; the 2nd International Biennial of Contemporary Art of Seville, Spain, 2007 and the 50th Venice Biennale, 2003. They have been awarded Berlin’s DAAD Artist Program award, 2002; the Pollock Krasner Fellowship, 2000 and the John Simon Guggenheim Scholarship, 1998 and their legacy has been captured in the books Compartment/Das Abteil published in 2010 by the MMK Frankfurt with an essay by Ranjit Hoskote and Such a Good Cover published in 2004 by Berliner Künstlerprogramm DAAD with an essay by Lynne Cooke. Zinny Maidagan lived in New York from 1994 till 2002. Since 2002, they have been living and working in Berlin, Germany.