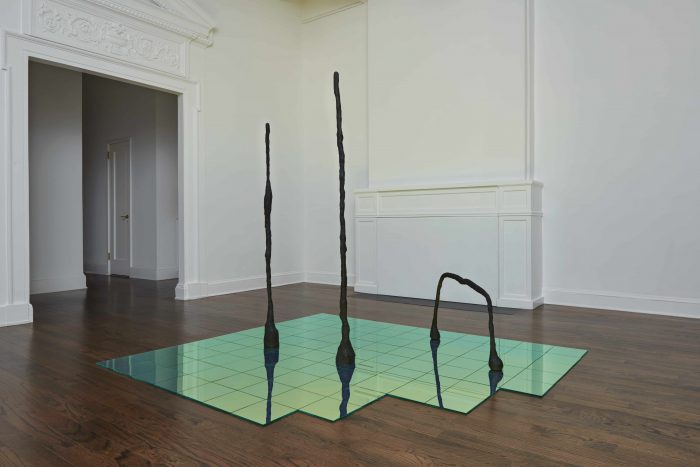 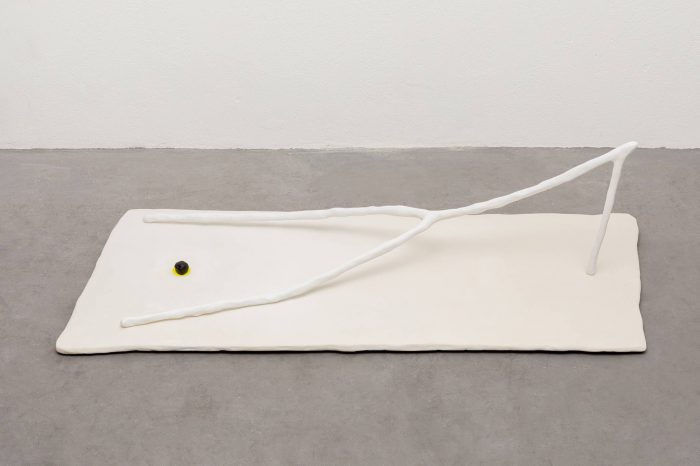 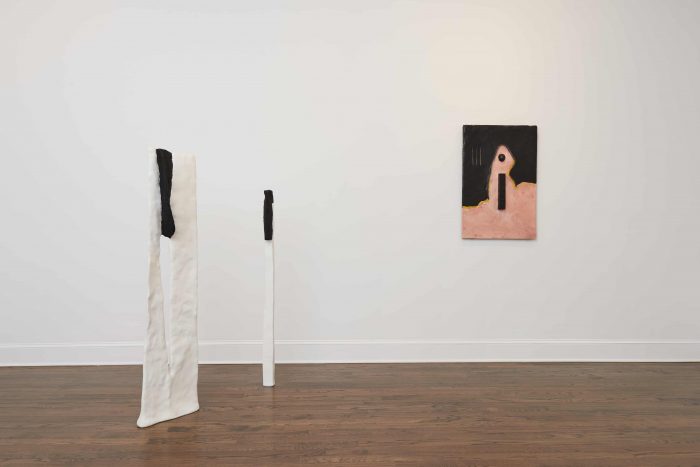 Paloma Bosquê is a sculptor who tends to put that talent in service of a wider, anthropologically minded activity, connecting with the urban, the animal, the inanimate in order to carry sensations of one place, one being, one thing over into an-other, sometimes making us rediscover what sculpture is along the way.

Bosquê’s exhibition In the Hot Sun of a Christmas Day, takes its title from a 1971 tune written by Caetano Veloso. Veloso himself borrowed an 18th century hymn, “God Rest Ye Merry, Gentleman,” and formed it to words chronicling his expulsion from Brazil. The melody, at once familiar, yet made strange by the lyrics, splits focus between concomitant activities: hiding and chasing, commemorating and longing. So too Bosquê’s sculptures in this exhibition articulate contiguous sensations.

One example is Silence Tube the handheld cylinder that she prepared from papier machê for this exhibition in New York, using only her hands and body to model and smooth the surface. It serves as an improvised listening device—seeming to suggest that two respective ears could be then conjoined. Bosquê explains, however, that she is not thinking of this work as relational. Then, I suggest, it is a tool geared to release the illusion of a unified here, now. Adjacent to a kind of technology, when directed, it absorbs particles of sounds. While you attune one ear, your second barely catches nearby scuffling. I like to think of it as an alimentary canal—a kind of organism which bifurcates, enhancing a portion your attention to your surroundings, and dampening the other. It can convert the exhaust from the open-window, the yawp of the vernissage, the creak of that chair into matter—you might trap these bits within the canal by covering your hand over its end. Or perhaps you might ingest them by putting them up to your lips, sipping slowly an event of captured music.

Silence Tube disarticulates the listener from their context, cleaving the experience away from the interior self, away from visible toward the exterior, its resonances as a resource. It lends itself tenderly and in doing so heightens and stretches corporeal boundaries. This sentiment carries across the work that Bosquê made for this exhibition. The installation itself comes as close as ever to an intensified frame. It is not a question here of escapism, leaving the gallery, but of how the artworks serve as a pivot between at least two experiences: the real and the illusory. Presiding over this magic are Bosque’s twinning sentinel sculptures titled In the Hot Sun of a Christmas Day, these cold figures—one c­onnected and bent—one separated and tall—quicken to the touch. Installed on a glass floor, the ambient light refracts to release colors: both turquoise and ochre as well as a series of images. See: the sculptures’ stems lengthened by surface in so many jewel-like facets. Depending on what fits into frame, you too may be pulled, propelled downward, where the depth of field moves beneath the solidity of the wooden floor and uproots the neat confines of figure and ground.

Like music, which carries stories across boundaries, Bosquê’s work infiltrates the inner ear, altering notions of structured balance. First engaging the interior walls, the ceiling rafters, the white painted mullions of the windows, then extending them, Bosquês’ works shifts our focus, insisting on the here as well as something more.