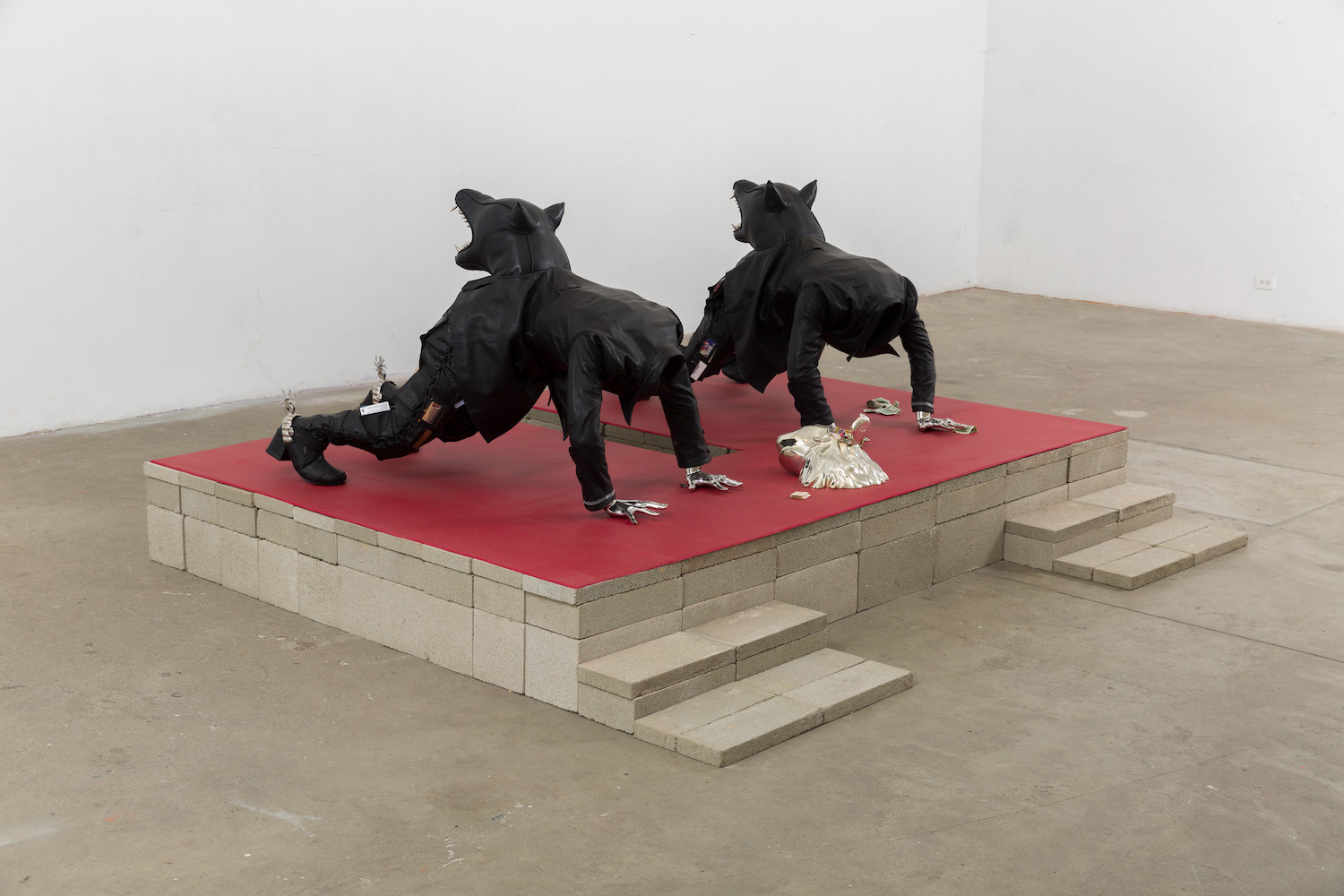 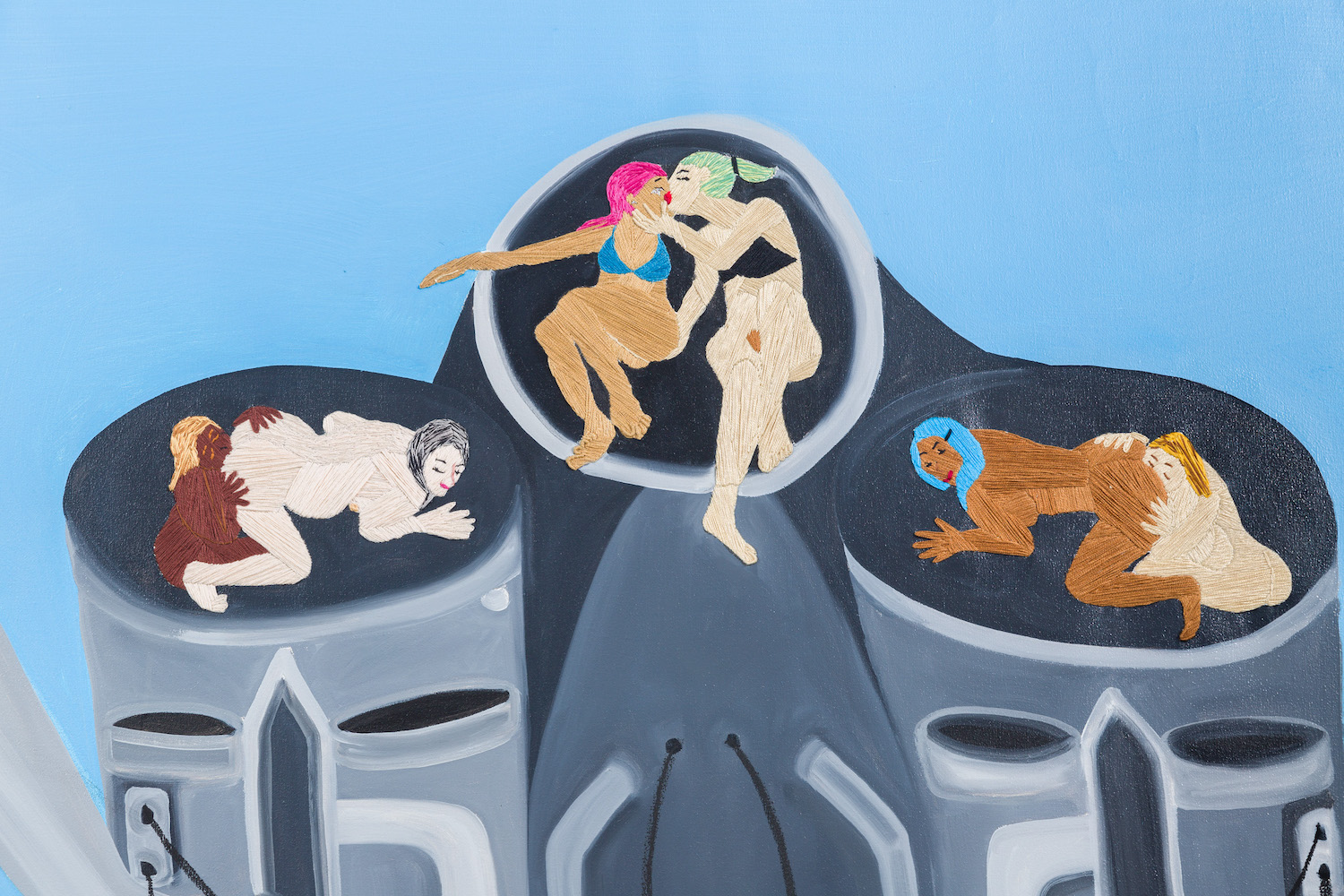 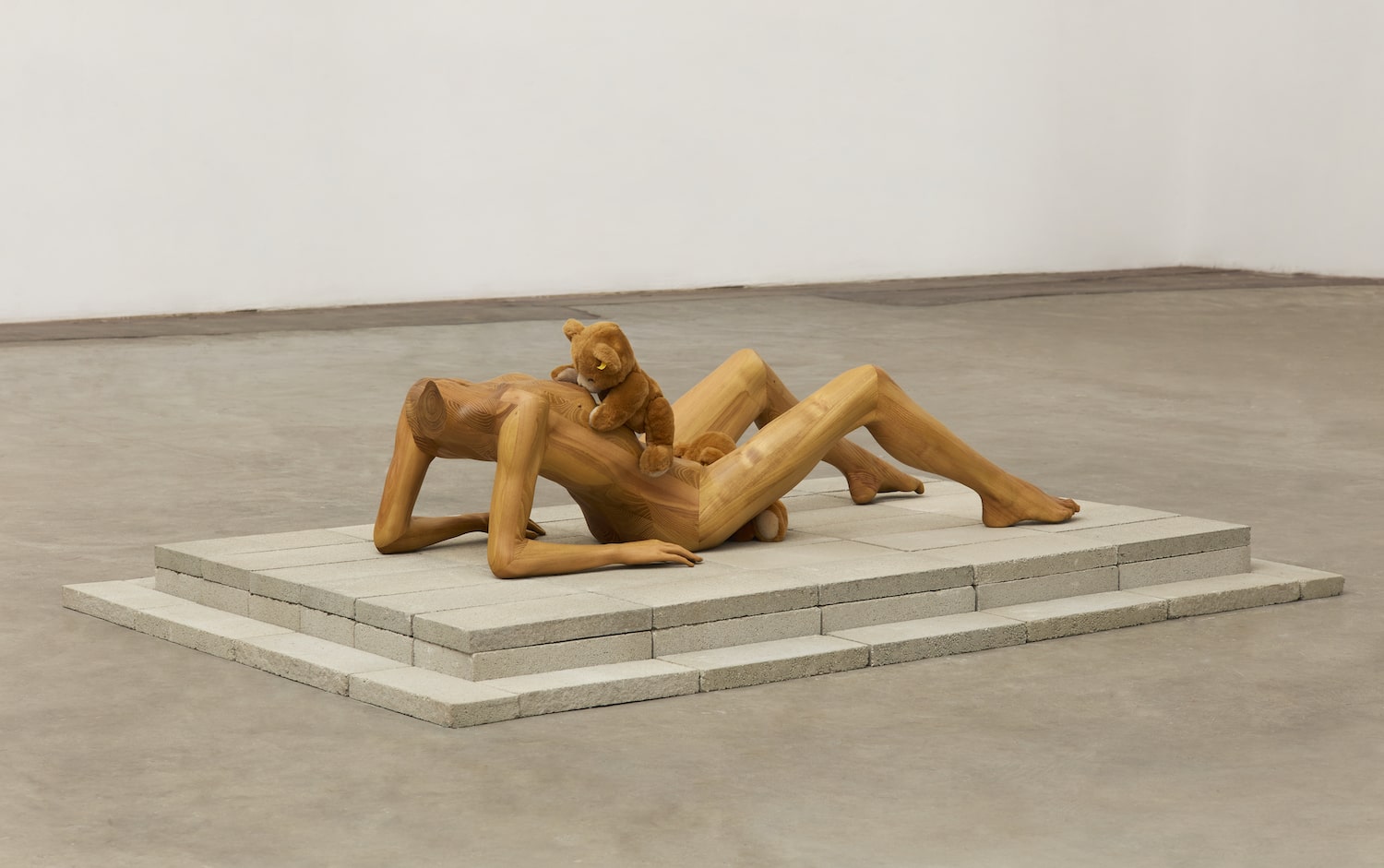 Together we made the blessed descent:

Our parents greeted us as wolves, Coaotlique’s sentinels laden with talismans from beyond the borderlands. Trembling, we emptied our pockets into theirs.

A spotlight haloed the icon in enraptured repose. Dressed in black locustwood, Lupa Lupx wore the rings of their years. They gave drink to their children: their cubs. Their sex was lovely with ornaments, their lips like lilies. Their name was oil poured out. Behold, you are beautiful, my love, behold, you are beautiful!

And the great wings opened before us. Fire licked the limbs of a metal beast in the garden of final delights. Revelers mounted its gaping shafts. Elemental emissions breached the pistons.

Its rage was a rave. Our bodies knew the way to them: to times that come to ends.

We knelt at the altar and offered blooms. In return, its surface smiled; its mouth spread wide to show us where the great volcano slept! Threads grew from its belly and sewed blossoms tenfold over its expanse. The revelers rolled in carnal vegetation. Their fury was water poured out.

We joined in their wild ablutions. We drank up the waters and became its carriers. And to this day we pour it out. Thus do we consecrate this sanctuary.

So welcome, todxs, ye who enter here: our pilgrims, our siblings, our whores. Heed nothing but the motto on your altar’s wings: A la verga todo. It is written: fuck everything.

LAR Arts presented its first US exhibition at Human Resources, Los Angeles, CA. From July 17, 2021 to August 21, 2021, the ritual site of Nuestrxs Putxs took place. Revel in the power of the femme, rejoice in the timelessness of cuir impurity, and purchase talismans from our sanctuary’s Sacred Rose Mercado. Nuestrxs Putxs proffered icons for those who have so long been denied the graven image that is their due.

Pilgrims to Nuestrxs Putxs also encountered the Sacred Rose Mercado, which was filled with new collaborations and limited editions from a borderless community of artists, designers, and publishers from Mexico City to Los Angeles. These elements of art, design, and participatory programming were integral to the conceptual landscape of the Nuestrxs Putxs universe. They acknowledged the symbiotic histories of religious sites and the marketplace, and served to situate the work of Albuquerque, Sánchez-Kane, Toranzo Jaeger within a decolonial and diasporic context. A formal interpretative chronicle of the Nuestrxs Putxs tradition was released after the close of the show.

This exhibition is made possible thanks to support from kurimanzutto, Nicodim Gallery, and Reena Spaulings Gallery. Generous support has been provided by Botanica Fine Art, Tracy O’Brien and Thaddeus J. Stauber, David Chilewich and Deborah Weintraub, Ruchika Garga, and Galerie Barbara Weiss.

Additional support has been provided by Hannah Howe, and Pamela Robinson.

Albuquerque was also a founding member of the music and performance duo Hecuba. She is currently a co-director of Osk, a collaborative studio that develops artificial and alien intelligence to create and approach art and individual experience through new human and nonhuman perspectives.

Bárbara Sánchez-Kane is a Mexican visual artist working across the mediums of experimental apparel, installation, and performance. Wielding a conceptual arsenal of poetic kitsch forms, she relentlessly defies the usual comforting distinctions between male and female, natural and artificial, ugly and beautiful, fantasy and reality, high and low. Influenced by Mexican contemporaneity and folklore, Sánchez-Kane sets up a visual universe that is a homeland for rejects. The denizens of this world are unashamed of fear and slime, ugliness and brutality: all that we have been taught to hide. Through this new race, which Sánchez-Kane terms “macho sentimental”— a human of any gender that is no longer denying its impulses—she diverts our gaze towards social pariahs and the dismissed. The disenfranchised crowds, the ideal woman, the crass man, and the body-pierced androgyne all marshal the poetics of the gutter. They turn into ambassadors of a nation that belongs not to the beautiful, but to the achingly sensitive and the brave.

Her artworks and garment collections have been exhibited in Los Angeles, Maastricht, Mérida, Mexico City, Milan, New York, Paris, and most recently, Vienna.

Frieda Toranzo is a native Mexico City, where she currently resides. Her pictorial work with feminist and postcolonial issues also questions the formal structures of medium itself. In 2016 Torzano was awarded the HISCOX Art Prize and a year later she obtained her postgraduate degree from the Hochschule für Bildende Künste Hamburg, after having also completed her professional studies there. Frieda has had the opportunity to participate in group and solo exhibitions internationally: she has exhibited at Kunst Werke Berlin, at MoMA Warsaw, and at Palais de Tokyo in Paris. Her work has been published in editorials like Frieze (2019), Art in America (2018), and Mousse 60 (2017).

Recently, Toranzo participated in group show De Por Vida at Company Gallery, and opened a solo exhibition at the Baltimore Museum of Art titled The Perpetual Sense of Redness.

LAR is a registered 501(c)(3) non-profit that creates new opportunities for female-identifying individuals in the contemporary arts. Gender inequality remains one of the art world’s most pervasive problems. Although over 50% of students pursuing MFA’s in the United States are female-identifying, they overwhelmingly lack proportional opportunities, representation, and pay in institutional settings. LAR creates immersive, itinerant curatorial and educational experiences that offer an international community of female and non-binary artists an unprecedented platform for conceiving, creating and exhibiting their work. We are an alternative incubator for emerging and under-recognized artists that generates new opportunities for women through curatorial and educational programs. LAR’s mission emerges from the conviction that gender disparities in the arts intersect with other forms of cultural inequity. Supporting international female-identifying artists and bringing long-overdue awareness to marginalized creative communities serves LAR’s overarching goal of diversifying cultural institutions. LAR’s experiential programming creates value by leveraging a strong network of female-identifying artists, curators, educators, and supporters, whose work inspires public interest in—and ultimately support for—all modes of intersectional cultural expression.

The cultic iconography in Nuestrxs Putxs was designed by Mexico-City-based artist and fashion designer Lorena Vega. Her imagery mirrors the graphic universe of existing religious iconography and can be seen throughout the exhibition: on talismans and souvenirs in the Sacred Rose Mercado, and on digital content in a gesture that mirrors the use of religious symbolism as a marketing device. Nuestrxs Putxs is the artist’s second collaboration with LAR: in 2019, Vega ideated a similar intervention for B L I S S. Vega is also the founder and designer for Ketvoid, a fashion label that produces limited-edition clothing inspired by the grit of Mexico City’s marketplaces and nightlife culture. Hand-printed pieces from her 2021 line are also featured in the Sacred Rose Mercado.