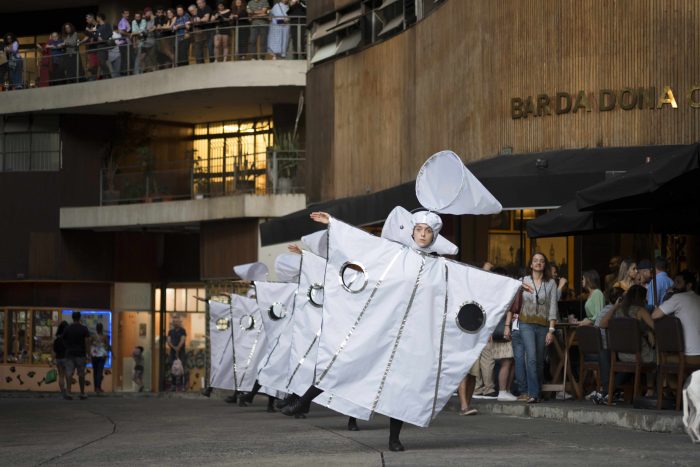 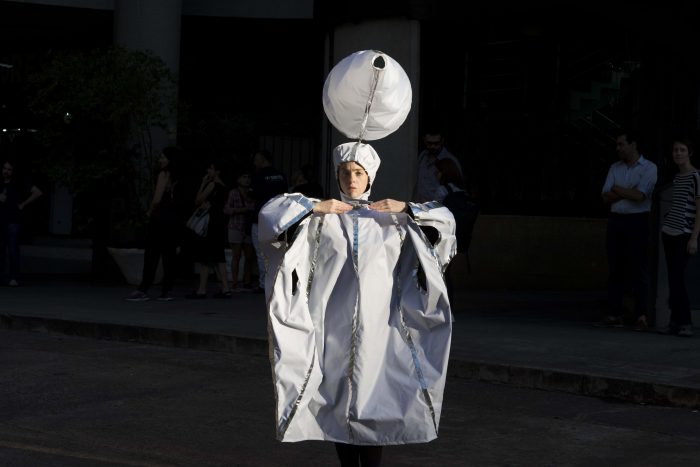 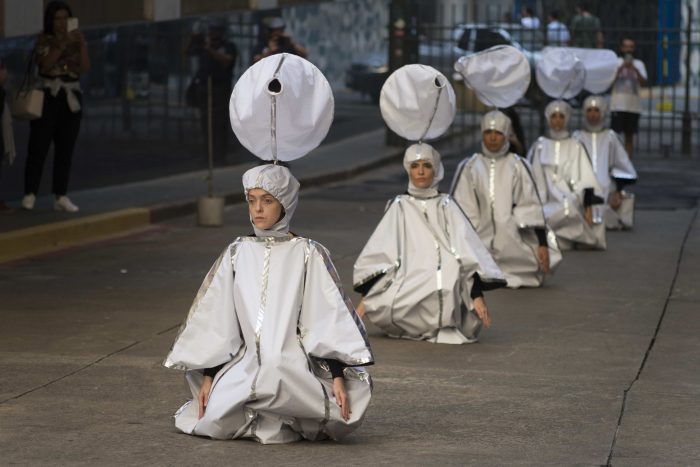 In his work Eduardo Navarro investigates possible points of convergence between art and science, dedicating special attention to the possibility of dialogue between natural forces and species. The artist frequently works with collaborators from various technical fields which help him develop special displays, to investigate the effects of natural phenomena in the human experience. This opens new possibilities of contact and interaction with the immediate surroundings. Navarro’s performances and installations often rely on dancers and volunteers to be activated. His projects range from complex choreographies, sculptures and installations to edible drawings, focusing on the sensorial in order to approximate the observer and what is observed, hence “becoming” the subject study.

Instant Weather Prediction is a project commissioned by Pivô and presented in its main exhibition space. Navarro departs from his interest in the wind movement to conceive a large installation comprised of 27 garments that resemble physical meteorological stations that will be activated by dancers throughout the exhibition. This project follows a methodology the artist has used in previous works such as In Collaboration with the Sun (2017) and Instructions from the Sky (2016) in which Navarro developed special apparatuses in an attempt to “sync” with the clouds and the movement of the Sun. For Instant Weather Prediction the artist created a windsock-gear that expands the connection between the body with the wind.

To develop the outfits, Navarro looked closely into the cartographic representation of air currents over the Earth and observed the potential of the functioning of wind indicators as instant choreographers, better known as windsocks. In Portuguese the windsocks translate as “birutas”, which also means a crazed person. Both the figurative poetic meaning and the utilitarian value of the object interest the artist. The windsock empties or fills with air indicating the wind direction from which the winds come from. Surprisingly, this analogical device is still crucial to the organization of air traffic worldwide.

The outfits created by the artist are made of nylon fabric—most commonly used in parachutes and umbrellas—yet, when activated by dancers, they stage a “ballet” where the wind becomes the central force that guides the movements turning into an instantaneous, invisible choreographer. To create this dance Navarro developed, together with the dancer and choreographer Zélia Monteiro, a series of movements in which they investigate the visual strength and the mechanical efficiency of the outfits when in contact to the wind currents outside Pivô.

When not in use, the outfits occupy Pivô’s space in sleep mode, awaiting for “meteorologistdancers” to activate them. The artist requested for the windows to remain open throughout the duration of the exhibition, allowing the air currents to circulate and set the suits in motion, constantly responding to weather variations.

The exhibition is made possible through an annual partnership with Inclusartiz Institute. Eduardo Navarro traveled to Rio de Janeiro, where he stayed in residency in the research phase of the project. In Rio he drafted the outfits and produced the drawings used in the graphic communication of the exhibition. During the exhibition period he will go back to Rio de Janeiro to conduct a public program. This is the second edition of the partnership, the first one enabled an exhibition and a residency of the Mexican artist Rodrigo Hernández.

Founded in 2012, Pivô is autonomous art space providing a platform for the artistic experimentation and critical thinking for artists, curators, researchers, and the general public. At Pivô, artists and curators are encouraged to respond to the specificities of the institution’s architecture—a previously abandoned 3500 sqm space inside of one of São Paulo’s most iconic buildings, the Copan, projected by Oscar Niemeyer, and its challenging context. The program is comprised by exhibitions, residencies, public talks and publications from local and international artists. The institution has held over 150 residencies in the past years and recent commissions include artists Erika Verzutti, Mario Garcia Torres, Leticia Ramos, Rodrigo Hernandez as well as the group show “imannam” by Anna Maria Maiolino, Ana Linneman and Laura Lima.

The Inclusartiz Institute is a leading institution that brings European art exhibitions to Brazil, developing also important educational programs in parallel to those exhibitions. Founded in 1998 in Rio de Janeiro, the Institute aims to promote social integration and cultural exchange by fomenting art to a wider public.

Zélia Monteiro, 1960, is a dancer, teacher and choreographer born in São Paulo, Brazil. Her work is based on the method of Klauss Vianna, with whom she worked for eight years, and on the classical Italian school, where she had contact with Maria Melô (a student of Enrico Cecchetti).

She currently runs the Center of Improvisation (Núcleo de Improvisação), teaches at the course of Communication of the Body Arts at PUC/SP and teaches classical ballet at the Sala Crisantempo.