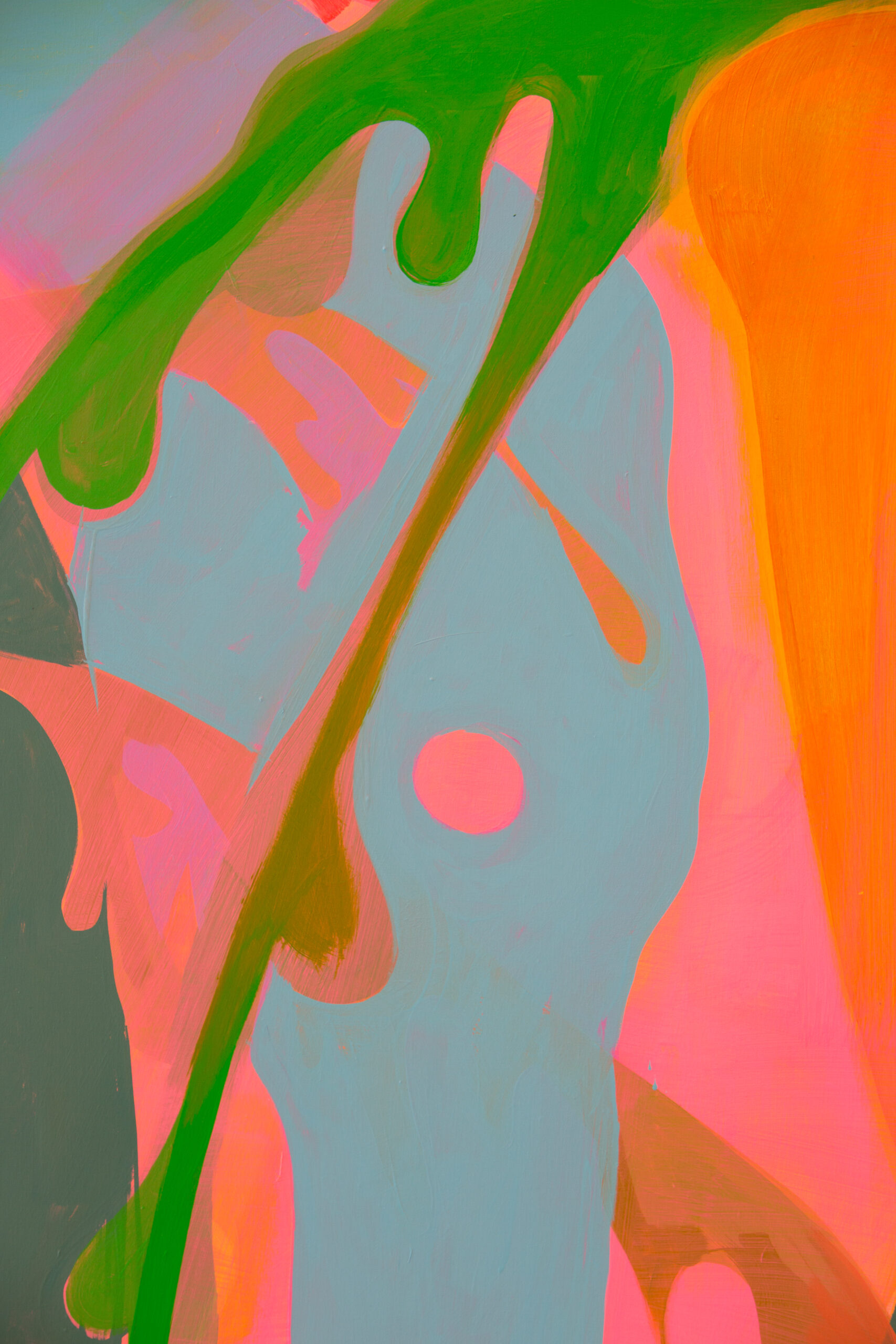 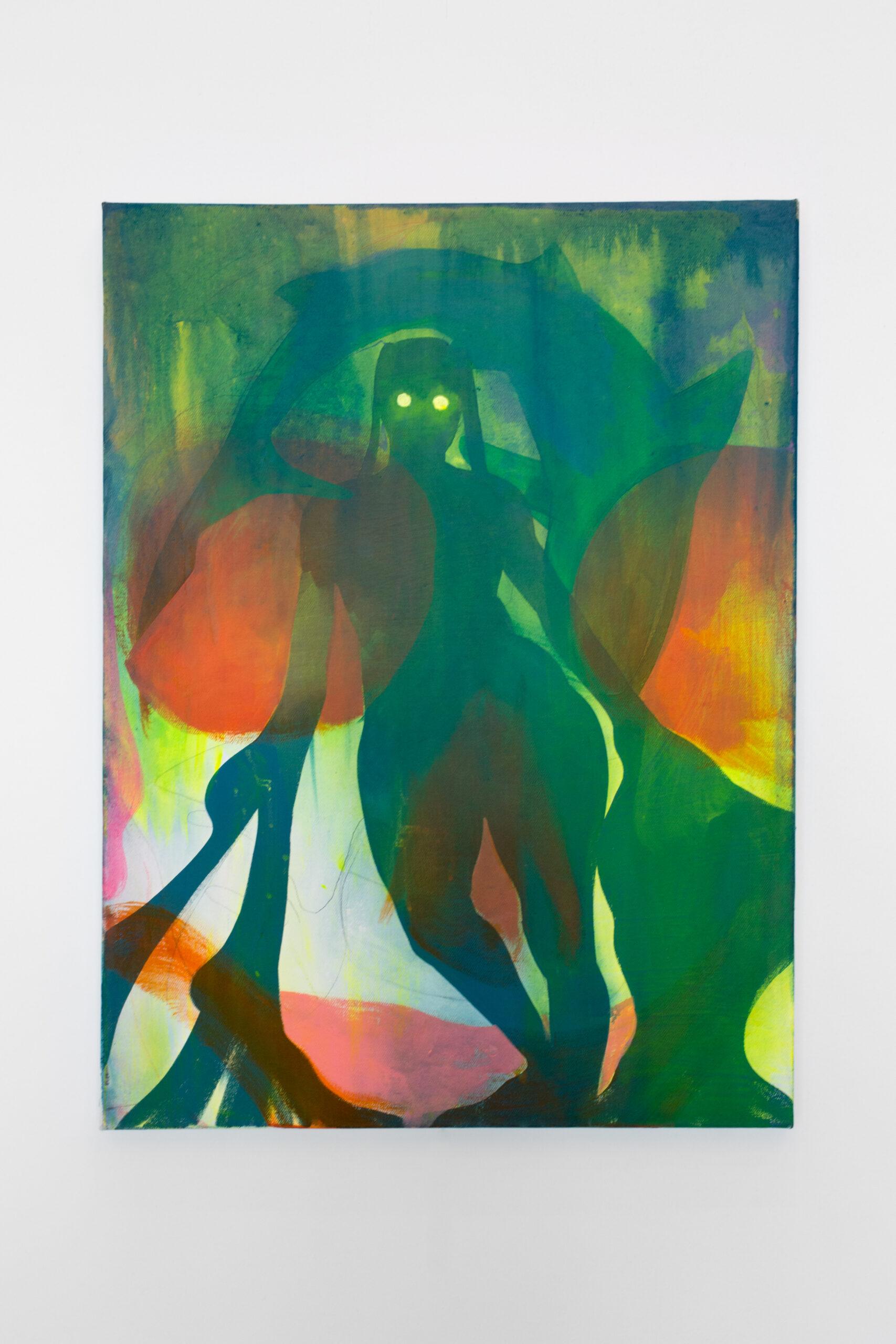 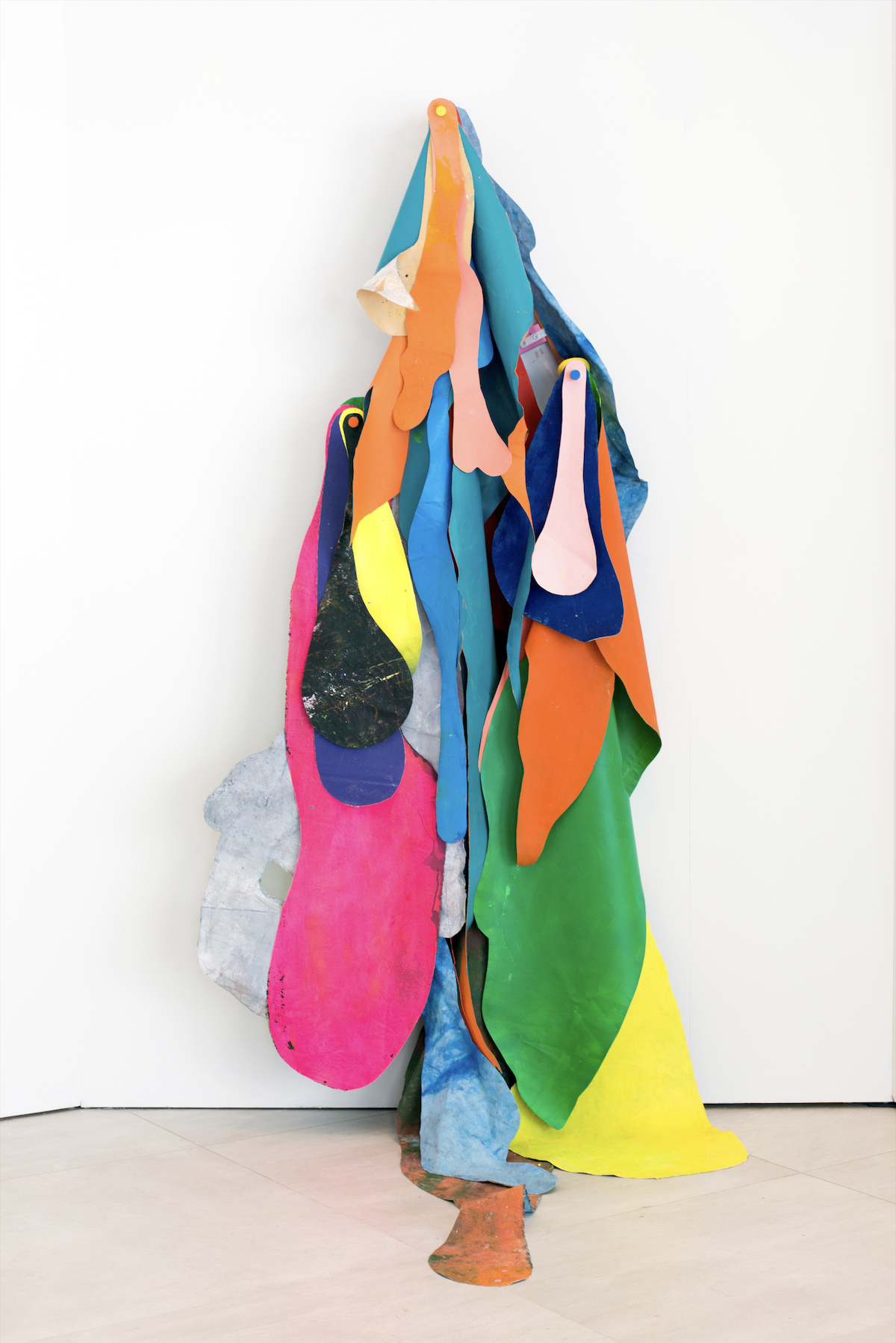 Metonym, a new series of paintings by Nadir Souirgi, challenges human positionality in relation to other animal realms through disorientation, interweaving, and framing. Souirgi’s work ranges from moments of ludic evolutionary force in Pink Light, where the background creates a levity to a scene that could otherwise be interpreted as simply agonizing, to moments of upturned abstraction which upon further examination reveal a code of phantom spaces and faces as in Carnival. In Face, the most abstract of the works, texture becomes so central that it feels like a topographical map of sorts. The preponderance of yellows and greens evoke a natural setting but because we are zoomed in on something that seems to have been fractured and because of the appearance of a reddish emanating mound, there is something territorial, even militarized, about this combination of colors and scratchings. One can’t help but think of contamination, radar, abuse of land use and the demarcation of public green spaces, even testing sites. Upon zooming out further, you notice that all along there has been a skull embedded into the composition. Throughout all of these paintings, one encounters matter and lines that hover between a multiplicity of states and possibilities—the figurative is also notational, the allegorical is also calligraphical, what begins as a plant might stretch into a vein. And so the viewer participates as decoder, surveyor, and even facilitator in a synthesis more similar to a tainted simulation of natural habitats than the habitats themselves. The color pink provides a subtle signaling to the delicate boundary between domestic life and the wild, turning the spotlight of who is implicated in the web of ecological devastation onto those most comfortable and able to move through saccharine spaces of celebration, leisure, and fun. Things rooted in the ground might be falling over us. According to a recent report from the Organization for Economic Cooperation and Development, the city of Miami has the largest population vulnerable to sea-level rise in the Western Hemisphere, yet it’s situated in a state where, until recently, government officials had been forbidden from using the words “climate change.” To address Miami’s precarious future, we must rely on creative approaches developed by the artists from here. Souirgi’s show is presented by WATERPROOF MIAMI, an environmentally-focused partnership between Miami-based arts organizations Bas Fisher Invitational and Bridge Initiative. WATERPROOF MAMI harnesses the power of innovative, temporary public art installations around Miami in order to advocate for meaningful solutions to South Florida’s environmental issues. Each project presents an opportunity for outreach, engagement, and action.
———-
When I came this way before
the scent of algae wasted on me.
Rushing past every sleep line
seemed contagious. Even a clean line.
The forger of our shared family tree face on the tray.
Evolution did not forsake
hallucination. Evolution smashed up against us.
Parent A holding child B’s hand through the aquarium on a
Sunday that dismounted the earth hole, why do you sling protozoic
forceps around as though the mosh
and the pit are equally hostage?
Who do you think you are?
Why did the surface stick
to me? Why did the cup stick
to the surface? There is no evidence
to suggest otherwise, no evidence
that the surface won’t attract more emitting
heat surfaces. Can we have a vision now too? How is the tally
of how many times body
is mentioned what moves between
men in cages and men walking past
men in cages as the acclimation against
the fact that everything around us constantly
moves. Evolution did not forsake
hallucination. Brown noise of hallway encounter if braided risks
becoming pink noise, pinker. We stand over the copulating animals,
we have a picnic, we exchange gossip, we are on
safari, captivated by our extension. A base level gray
matter learned generally only through years of passing through totem groves.
You were given a chance.
You are… you have been
you are a…
Light is piss. I was given
a cartilage to pawn and to turn
into gelatin. One of the few times a point is drilled in because
you see it in men or
a grey island. The sister began
performing mouth to mouth faltering
on the brother, at that point
already cyanotic.
Speak for your own island.
hey shh
shh I forgot
to tell you
It is better on a day like it is here
than on a day like it is
there. If the leash were as much an extension
of my body as the chair were
an extension of mind mine.
We are not trespassing.
We are not trespassing.
The diagram cannot be compared
to any other thing, not even in texture material.
No not the flag. I don’t want you to do that.

Now we are trespassing.
Text and poem by: Valerie Hsiung