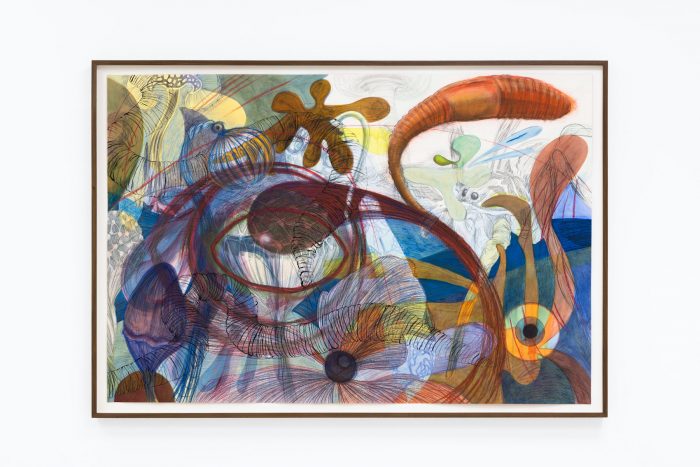 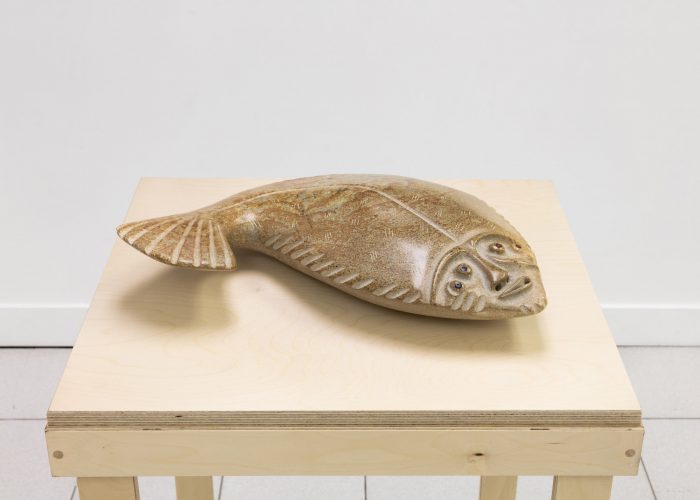 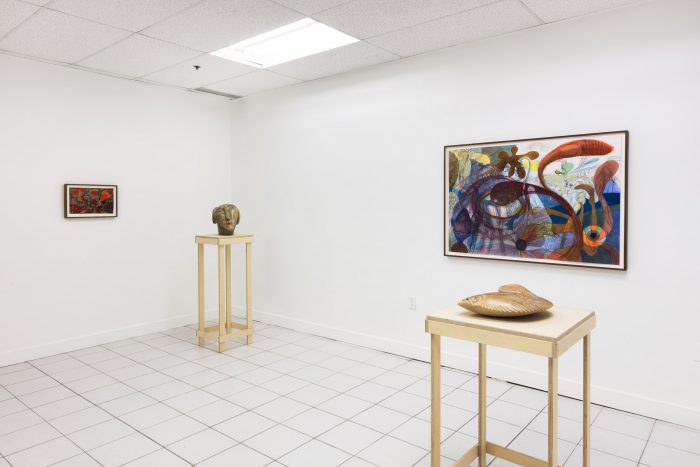 Eyes in the deep, nature is looking back.
We are not separated from what surrounds us, we are tied together. A web.

Sarah Davidson draws and paints after close observation of nature. Biomorphic forms ranging from foliage to frog eyes, insects, spiders, worms, fungus, and microbes populate her compositions. Questioning the idea of objectivity, she makes reference to the attempt to describe and catalogue the «natural» world. With form reflecting worlds within worlds, her works investigate the interconnection between bodies, nature, and the environment.

Drops turn into fluid lines, in constant motion, changing as water.
Flora and fauna may or may not provide a bountiful supply, and one must adapt.

Sculptor and printmaker David Ruben Piqtoukun makes works that incorporate diverse materials such as stone, antler, bone, wood, and steel. By collecting traditional stories from his parents and elders, he absorbed the Inuit culture that he was removed from as a child and took an immense leap into Inuit mythology. The incorporation of new and old stories into his stonework conveys his interpretation and acknowledgement of his Inuit ancestry.

If carving operates a transformation of the material, the images created are the product of the spiritual shaping of a vision.

Forms tend to abstraction, in search of harmony. It is about life.

Sarah Davidson (b. 1989, Ottawa, ON) has made a living guiding expeditions for an outdoor school for the past ten years, and while she often draws directly from her more than human surroundings, she has become increasingly aware that drawing from observation is a fraught gesture. In her art she aims to ask the question: who is seeing who, and how? Sarah Davidson has exhibited across Canada at venues including Erin Stump Projects (Toronto, ON), Unit 17 (Vancouver, BC), The Power Plant (Toronto, ON), Little Sister (Toronto, ON), Birch Contemporary (Toronto, ON), The New Gallery (Calgary, AB), Chernoff Fine Art (Vancouver, BC) and Audain Gallery (Vancouver, BC). She was a finalist in the 2018 RBC Canadian Painting Competition, and is the recipient of several other awards and residencies including a residency at the Banff Centre (Banff, AB), a SSHRC Graduate Scholarship (2018), and AiR Sandnes residency in Sandnes, Norway (2016). She received her BFA from Emily Carr University in 2015 and her MFA from the University of Guelph in 2019.

David Ruben Piqtoukun (b. 1950, Paulatuk, Northwest Territories) grew up in a small nomadic group, hunting and fishing for subsistence along the Arctic coastline. At about age 5, he was taken from his family and forced into Canada’s residential school system. The violence of the ensuing erasure of language and traditions provoked an identity crisis. In 1972, he ended up in Vancouver, British Columbia, where his brother Abraham Apakark Anghik Ruben introduced him to stone carving. David Ruben Piqtoukun quickly gained acclaim worldwide and has exhibited extensively in Canada and internationally. He has shown at the National Gallery of Canada (Ottawa, ON), the Vancouver Art Gallery (Vancouver, BC), the Winnipeg Art Gallery (Winnipeg, MB), the McCord Museum (Montreal, QC), the Musée National des Beaux-Arts de Quebec (Quebec City, QC), the Art Gallery of Ontario, Koffler Gallery (Toronto, ON), McMichael Gallery (Kleinburg, ON), the Staatliches Museum für Völkerkunde (Munich, Germany), the Institute of American Indian Arts (Santa Fe, NM), the Museum of Arts and Design (New York, NY), Galleria d’Arte Moderna e Contemporanea (Verona, Italy), the National Gallery of Zimbabwe (Harare, Zimbabwe), the National Museum Institute (New Delhi, India), the National Museum of Art (Osaka, Japan). He recently participated in NIRIN, 22nd Biennale of Sydney (Sydney, Australia). His work is included in the collections of the Art Gallery of Ontario (Toronto, ON), the McCord Museum (Montreal, QC), the National Gallery of Canada (Ottawa, ON), the De Young Museum (San Francisco, CA), the Smithsonian (Washington, DC), the Greenland Museum (Nuuk, Greenland), and UNESCO (Paris, France) among others.