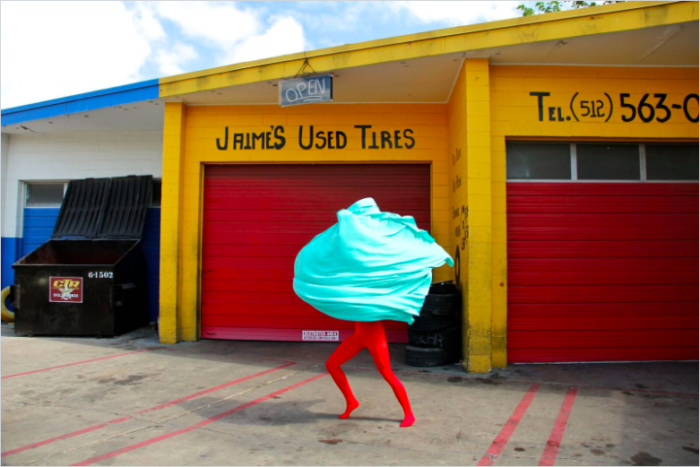 The future is their inseparability yet, at least for the moment, the artists in this show who focus on their slipstream artworks, present islands of materiality for salvation.
—Tyler Stallings[1]

In 1899, the story goes, two US American sailors left their native shores on a set course for a scientific mission in Southern Polynesia. Their ship, the Albatross, was equipped with precisely the tools necessary for such an expedition, those required for their research, but, more pertinently, those needed for traversing the Pacific: modern devices such as maps, sextants, and compasses. The sailors, however, emerged from the islands with their attitudes to their technologies revised by the generational knowledge of the Polynesians. The non-instrumental, intuitive navigation pointed towards the limitations—or false bravado—of the advanced technologies of the West. Unlike the US Americans, Polynesian navigation was aesthetic, based on cat’s cradle-like wreaths of reeds woven together in straight or curved lines, forming provisional and ever-shifting maps of the islands. Instead of insisting on the calculable, these maps represented waves and streams pointing to possible islands—fictional islands—from which a position could be triangulated. In this method of pathfinding, direction was determined by fictionalizing new worlds; one could say that movements and spatial constructs were formed through the weaving of new earthly stories.

Part of the Getty’s PST LA/LA programming, the exhibition Mundos Alternos: Art and Science Fiction in the Americas, at UCR ARTSblock in Riverside, brings together over thirty artists from around the Americas, whose practices use “tropes of sci-fi” to similarly navigate alternate worlds as the Polynesians: through intuition and cultural processes. In this exhibition, the curators propose an inseparability of present and future, where all future politics must be beaded into the creation of new form. The woven navigation charts offer an apt model for the exhibition’s aims to map and envision future “islands;” here focus shifts away from a continuation of colonial narratives to expeditions that offer the possibility of writing new stories. That is, Mundos Alternos is not a reparative reading of the past—for it would be arrogant to assume one could “repair” a colonial history simply by prolonging its discourse—but a critical and playful focus on, to borrow from Donna Haraway, “storytelling for earthly survival.” [2] 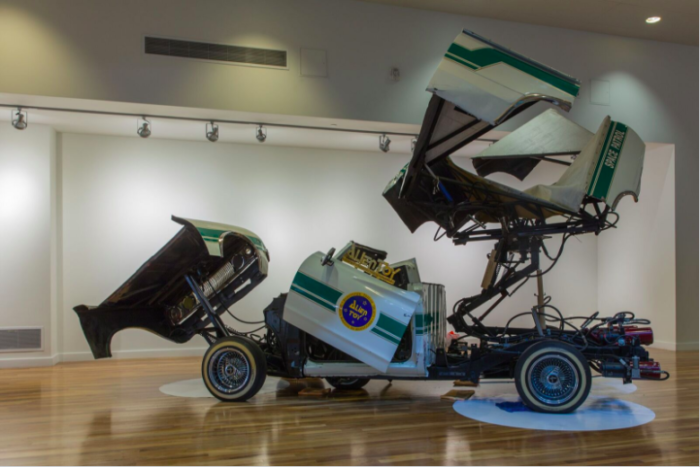 Yet to navigate without instruments, with sense and symbol alone, is also to risk getting lost. Whether it’s a question of miscegenation or heterology by multitude, the exhibition’s broad rubric does not necessarily convey a sense of futurity outside of scientific-technological discourses ultimately culled from the West. This is a wholly other system of tropes at play. The vehicles, pods and cues taken from state-of-the-art objects or Internet-era technology (such as works by Rubén Ortiz-Torres or Jillian Meyer) are ideas that belong less to sci-fi than to the colonial or capitalist narratives that permeate our world as is. Considering that planning for the exhibition began two years ago, and that most of the works are from the three decades prior to the election, this realist thread is a dystopic vision of what was to be anticipated of our current moment. Still, rather than backpedal through mechanical visions of privatizing space, body, or home, it befits an audience to concentrate on the innermost question of Mundos Alternos: what models will we export to other planets?

Portuguese-born, Los Angeles-based Rigo 23’s ongoing project Autonomous InterGalactic Space Program (2009–present) obstinately visualizes autonomy to such ends, as if it had already happened, as if we had already entered a new phase of history where the imperative is to create a plentitude of new slogans, strategies, and vocabularies for the future—one that is intergalactic, but more importantly, intercommunal. Developed in collaboration with populations from the Chiapas region in Mexico, the Space Program exists as a continuum of workshops aiming to give shape to the ‘poetics’ of Zapatista politics; here the result is a corn husk shaped spaceship that centers a room filled with drawings, small weaves and pompoms. The ship’s wooden husk looks en route to a more natural order of things, where everyone is equally alien and outlandish. As scribbled on a drawing inside the exhibition, it aims to model ‘a world that fits many worlds,’ though also raises a question as to whether the ship assimilates technology more-so than people. Like so, the tapestries of Guillermo Bert (The Visionary, and Lukutuwe (Fertility), 2012) integrate the digital patterns of QR-codes into those traditionally woven by the Mapuche people in Chile. The works bring the oral histories of Mayan and Zapotec populations living in Los Angeles into a collective means of communication; each code leads to a webpage with audio and video interviews of people affected by immigration and displacement. Mapped here are also the opposing values attached to modern and traditional technologies: one method, semiotically speaking, is as much as a “quick response” as the other, assuming we embrace the inherent cultural difference.

Difference is also celebrated in works that deal with the production of sexuality and identity, wherein to be “Other” is to be affirmative. These works call for alienation under a xenofeminists vein–like Laboria Cubovnik: “as a frame for construction, […] a groundless universalism.”[3] In a painting by Laura Molina, Amor Alien (2004), a sexy extraterrestrial lies in the arms of an aloof, dispassionate white man in a space helmet. She is ambiguously asleep, but, unlike her companion, she has no accoutrements to help her breathe in the atmosphere. On this planet, she is autonomous (or dead, but that would be a dystopic reading of patriarchal, colonial triumph). Elsewhere, the inexorable photographs of Ricardo Valverde, such as Alien Queen de los Muertos (1983/1991), show people in Dios de los Muertos costumes, outrageously baroque, professing an alien realness, like intergalactic drag.  His subjects were the Los Angeles neighborhood she lived in, their Chicano inhabitants, whom in these photographs are found toying with ‘alien’ identities through costume—as in Two Alienz Muertos (1983/1991) or Armando Norte: Blade Runner de East Los (1983). Identities and languages metamorphose for the sake of transgressing genres and genders in this interspecies masquerade—this, emphasised by the presence of costumes by AZTLAN Dance Company, LA VATOCOSMICO c-s, Robert “Cyclona” Legorreta, Mundo Meza, Irvin Morazán, Carmelita Tropicana, and Luis Valderas. In these, identity is a teeming flux, even if just at surface. 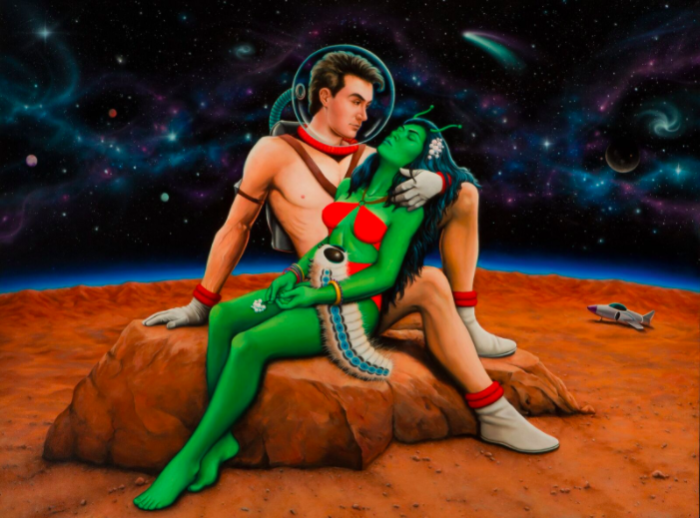 The film Supernova by Mexican collective La Gravedad de Los Asuntos takes the levity of costume parties to a literal point of weightlessness. Here, a crew of astronauts and artists take a zero gravity flight to smash apart a piñata midair. Having just attended a lecture by Alain Badiou at Pasadena’s Art Center College of Design, where he repeated the phrase “smash the state” a few times over, it was tempting to tease more severe meaning from this frivolous scene. However, it makes more sense in relation to utopian ideas of celestial universalism: Supernova is a utopia without site, a paradisiacal pleasure geared towards a spirited withdrawal from social law, its supposed gravitas. The film’s affect is that of confetti mid-air, suspended for just a second before falling down, and finding its new order.

An associative history of science fiction and colonialism underwrites the exhibition; the divided identities, mystified senses of self, and political traumas intrinsic to both narratives are clearly reflected in the double entendres of “otherness” and “alienation.” Yet like islands, withdrawn from the mainland as to offer true repose, alienation is in many places embraced–redefined–as an opening. Histories of immigration, identity and security are here rewritten from the perspective of the ‘alienated,’ so as to reclaim agency to the notion of otherness by imagining a point, as Stallings writes, “where self-determination and autonomy can occur in a present that is quickly becoming a past pointing to a future.”[4] Like Polynesian maps, the exhibition is too broad and too abstracted to provide exact ‘directions’ for what that future might be, and frankly to assume so, would be to miss the point. Mundos Alternos is all about wayfinding: constructing identities, models for export, islands of thought, feelings of levity even in the most grevious of situations.

Sabrina Tarasoff is a curator and writer based in between Paris and Los Angeles.

[2] This is in reference to the title Fabrizio Terranova’s 2016 documentary about Donna Haraway. 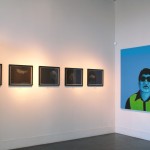 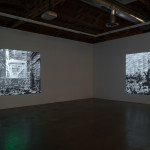 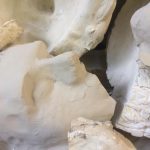 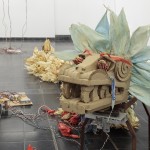