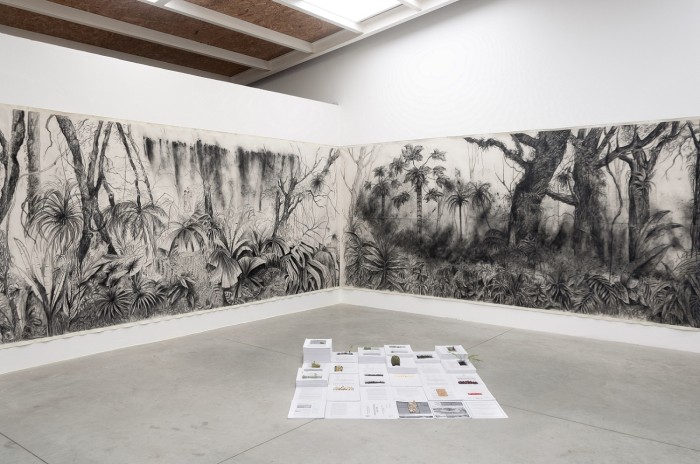 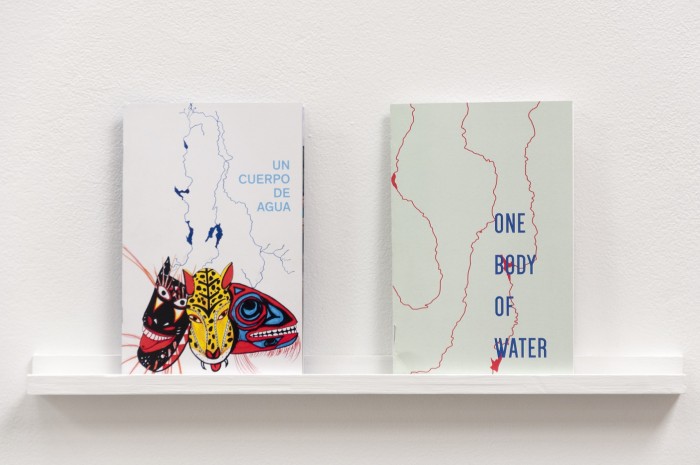 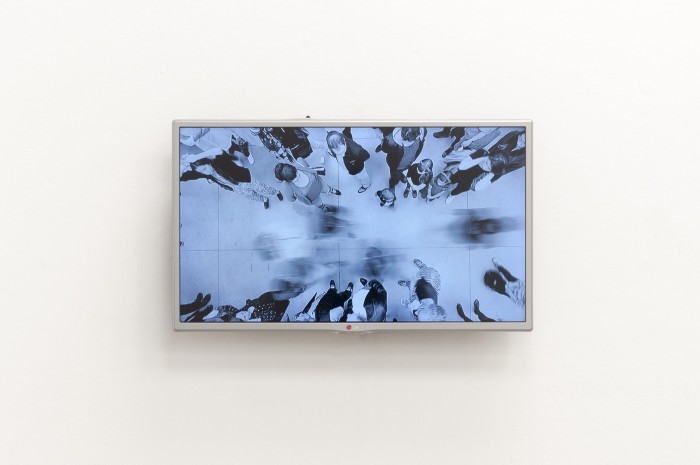 The Lyubov Orlova cruise, built in Yugoslavia in 1976, has spent several years wandering the oceans with a crew of hundreds of rats that have been eating each other in order to survive. This image of cannibal rats forming a colony evokes science fiction stories in which isolated communities generate societies indifferent to civilization, or at least, to the laws that normalize civilization. This anarchic state can be understood in the Judeo-Christian imaginary as the idea of hell: the principles governing these communities have their own natural order, hard to decipher for the minds tortured by years of indoctrination.

Another way to interpret the terrifying story of the dammed ship is to imagine a society in which some of the rats are not cannibals and they try to resist as much as possible the violent domination of their peers.

Among Cannibals presents works by Carolina Caycedo, Noemi Perez, Laura Huertas and María Buenaventura, who share an interest in examining the tools, consequences and catastrophes of colonization processes on human communities, nature and food.

The Territory is not for sale is a work in which, among other things, the paper loses its social role, its message, to become matter. The stacks of paper are not without text; they indeed contain the decrees of expropriation of peasants’ lands in Usme, a rural part of Bogotá, which is on the verge of becoming urban. The farmers will have to sell their lots. The State will buy and a private company will make the business.

The officially assigned prices are ridiculous: two dollars per square meter of land. The farmers do not want to sell because they want to keep their way of living and even if some would want to become urban citizen they will not able to with the price offered for their land.

The transformation of land from rural to urban lays in those papers stacked in the piece. Thus these, as well as revealing their weight by being matter, also reveal the particular weight of ideas: of laws that without knowing anything about land end up destroying it…

Yuma, or the Land of Friends.

The ecological disaster that we are facing is one of the many consequences of the patriarchal structure of contemporary society. Conceiving nature as a female entity, man, subject to phallic violence, has harmed it with the same violence used against the female body.

Yuma means land of friends. When the Spaniards arrived, this river, a fundamental part of the colonial machinery and key to the human and natural trafficking, was renamed Magdalena. In Christian mythology, María Magdalena is a prostitute who accompanies Christ’s apostles. By changing its name the symbolic meaning of the rivers is sophistically transformed. What was once a source of friendship, food, and a land of peace, has become the body of a sinful woman, thereby nothing has to prevent the corrupt intervention of man. There were many imposed names: churches erected over temples and astronomical observatories; phallic constructions, usually, replaced the ancient sacred presence with the aim of transforming a mythical mentality, circular and infinite, into a linear, disposable and polluting culture.

This monumental impression on acrylic contrasts and mixes three satellite images that capture the progressive devastation of the El Quimbo dam on the Yuma river (Magdalena), in the Department of Huila. The river, sand, forests and crops generate sinuous forms when they are captured at such a distance. At first glance the surface looks like polished stone. However, ecological and social fragmentations are evident at a closer look.

Beyond control. Video of a performance recorded during the opening of the exhibition on Saturday, April 16, 2016.
Performers: Claudia Salamanca, Diego Fletcher, Mary Leubro, Andrés Uribe, Carolina Caycedo and Jorge Caycedo. Beyond Control’s choreographed movements are constructed from the visual and theoretical relationships that exist between the construction of dams, the containment of bodies of water, and the physical, legal and psychological control of the social body.

The performance explores gestures and choreographies of power, including those used by the police or the army to contain and break masses or manipulate individuals in public spaces, as well as current and fall, the necessary conditions of a river for the operation of a hydroelectric dam.

Yuma, Elwha, Yaqui. The drawings in the form of a folded book are extracts from the texts of the performance One Body of Water; using the riverbeds as central elements of the written and visual storytelling, the three texts are interpretations of myths and rituals associated with Yuma (Magdalena), Elwha and Yaqui rivers.

Cosmotarrayas. Weaving and throwing a fishing net reflects an accumulated knowledge transmitted for generations. The act of weaving and fishing is equivalent to thinking with the body, or feel-thinking, and reaffirms the river as a public space and as a common good. As consequence of the privatization of rivers, simple daily gestures such as cultivating or throwing a fishing net, become radical acts. These daily choreographies, intrinsic to the geography we inhabit and closely related to a territory or to an ecosystem, are called geo-choreographies. Cosmotarrayas are composed of fishing nets, woven and used by fishermen of the Yuma River (Magdalena), and of modified materials and personal belongings of the artist, used during the performance One Body of Water, in June 2015 in Rio de Los Angeles in California.

Yuma eats Bolivar. On Saturday September 19th 2015, together and in solidarity with the communities affected by the construction of dams in Colombia, Carolina Caycedo organised a meeting at the Plaza de Bolivar of Bacatá to write with their bodies YUMA RESISTE, the ancestral name of our Magdalena River. A drone was flown to record the action, but due to technical problems images were lost. Yuma eats Bolivar is a drawing made from the memory of this action.

One Body of Water is a performance that interweaves the story of three American rivers subject of dispute: the Yuma (Magdalena), in Colombia, in process of privatization due to the construction of dams and the dredging for navigability; the Yaqui in Sonora, Mexico, which has its riverbed and mouth dry because of three dams, of the transfer and channelling of its water for agricultural irrigation; and the Elwha in the Pacific Cost of North America, which is being restored by the dismantling of two obsolete dams. The text is written in first person, and the performers embody the voices of the rivers around a fire, inviting us to transform the way we think about nature and our interaction with extra-human.

Panorama Catatumbo. Adopting the 19th century European tradition of Panorama, which consisted of large paintings representing exotic landscapes with a clear colonialist intention, Panorama Catatumbo proposes a drawing installation about the emotional story (nonlinear) of a personal territory. The Catatumbo is a jungle region of Colombia, rich in minerals, wildlife, rainforest and jungle, originally inhabited by the Bari community. The history of violence against its people, Indians and farmers, has been the hidden and silent history of oil and natural resources exploitation.

Since 1918, year in which the Barco concession has been approved, this area has been subject of clashes between indigenous and workers, multinational corporations, illegal groups and different actors for the control of the territory. Today, these lands are used for coca plantations (which is processed in laboratories hidden in the jungle), for palm for biofuel and for illegal and legal forms of mining.

Panorama Catatumbo takes as a reference the XVIII and XIX century illustrations of cartoonists who came to America to record the New World to illustrate key moments in the history of this region: the arrival of the Colpet, the confrontation of indigenous populations and workers, the intervention of missionaries, settlers, guerrillas, the coca plantations, the massacres, the smuggling of gasoline, travels, palm plantations, etc…

A travelogue without words over the Amazon River, crossing landscapes inhabited by huge modernist abandoned constructions, as memories of an utopian past engulfed by nature.

Aequador is an ucronía entwining documentary and science fiction, and evoking colonization, the excesses of modernization policies in Latin America during the twentieth century and its cohabitation with the present.

A documentary fiction inspired by the early stories and natural and ethnographic descriptions made in America by colonizers, missionaries and scientists. Filmed in tropical nursery of Lille’s Botanical Garden, the film uses the architecture and plants of this place to stage the initiatory journey of a fictional explorer. Exploring the notion of exoticism, the film evokes the violent origins of the “New World” and the persistent iconography that these stories engendered. 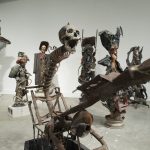 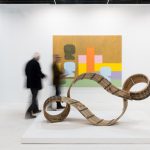 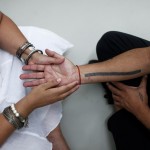 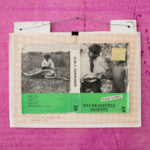