Martín Ramírez. His Life in Pictures, Another Interpretation, at ICA, Los Angeles

Around 1958, Esther McCoy took a photograph of Juan O’Gorman during his visit to Watts Towers in Los Angeles. In the image, the Mexican architect lifts his head to take in the sculptures built by Simon Rodia between 1921 and 1954. Rodia was an Italian immigrant who moved to the United States in 1895 at the age of 15. With no artistic or architectural education, he decided to build a singular construction. With no particular purpose, he built the seven structures that make up the towers (collectively entitled Nuestro Pueblo) using concrete, metal rods, chicken wire, and an endless array of found objects, from ceramic fragments to soda caps. O’Gorman appreciated the work of Rodia as well as that of other builders and artists with similar projects, such as the Frenchman Ferdinand Cheval. The stone coating of his house/studio on San Jerónimo Avenue and many of his “fantastic” paintings are, in part, a tribute to these authors. 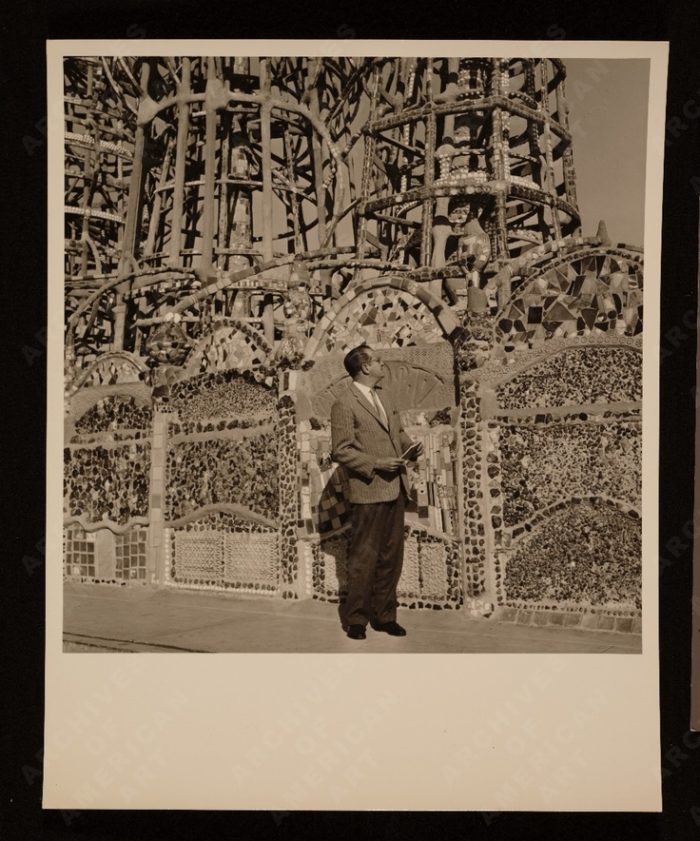 When O’Gorman visited Watts Towers, Martín Ramírez was also living in California, but confined in a psychiatric hospital. Ramírez was born in Jalisco the same year that Rodia immigrated to the United States. As if following in the Italian’s footsteps, he also crossed the border and settled in Los Angeles. In 1940, while Rodia was still working on his structures, Ramírez was arrested in Pershing Square and interned in the Stockton State Hospital, where he remained until 1948 when he was relocated to the DeWitt State Hospital in Auburn. He lived there until his death in 1963. Recent studies have called into question Ramirez’s diagnosis, which, to some academics, appears to have been a means to confine an undocumented migrant, rather than a legitimate psychological health concern. Encouraged by Tarmo Pasto, a Sacramento State University art and psychology professor, Ramírez spent most of his time in seclusion drawing. At his death, he left behind dozens of drawings with a style that today is recognized as distinctly his own.

The exhibition Martín Ramírez. His Life in Pictures, Another Interpretation, on view at the Institute of Contemporary Art, Los Angeles, as part of the Getty Foundation’s initiative Pacific Standard Time: Los Ángeles / Latinoamérica, includes 50 pieces by the Mexican artist. For the exhibition, a six-foot-long drawing Untitled (Scroll) (ca. 1950) was restored and is on view for the first time. The piece, displayed in a large display case, offers a condensed view of the distinct visual characteristics found in the rest of Ramírez’s work in the show. Of particular interest is his method of joining together fragments of different papers to form a unified surface (some functioning as collage) with glue and saliva. This method of assemblage is reminiscent of Rodia’s work, as he also collected and made use of fragments for his towers. Although Untitled (Scroll) stands out for its great dimension, Ramírez made several large-format works such as Untitled (ca. 1950) of approximately 360 x 100 cm and on display, or Untitled No. 79 (Arches) (ca. 1960-63) 183 x 61 cm.

In his essay for the exhibition catalog, James Oles addresses ways Martín Ramírez’s biography impacts our perception of his work. If Ramírez had developed his practice in Mexico, for example, his work wouldn’t be understood today in the same way. His autodidactic production would be seen – if fortune had smiled upon him and given visibility to his work – as an expression of innate creativity, as occurred with the work of Mardonio Magaña or other masters of folk art in the post-revolutionary era. Something similar would have occurred if he were an American citizen, since in the United States there was a strong institutional appreciation for naïve and folk art at the time, as demonstrated by the popularity of Morris Hirshfield and the 1939 MoMA exhibition Contemporary Unknown American Painters. If Ramírez, as a migrant worker, had crossed paths in California with the likes of José Clemente Orozco, as happened to José Chávez Morado, perhaps he could have matriculated at a university, studied art, and returned to Mexico as a formally trained artist. If O’Gorman had discovered his work, perhaps he would have incorporated the architectural sense of Ramírez’s drawings into his structures and paintings, providing Ramírez greater recognition during his life. But none of this happened. Despite the countless possible scenarios, what marked Ramírez’s life and work was his arrest and subsequent confinement in mental health institutions. 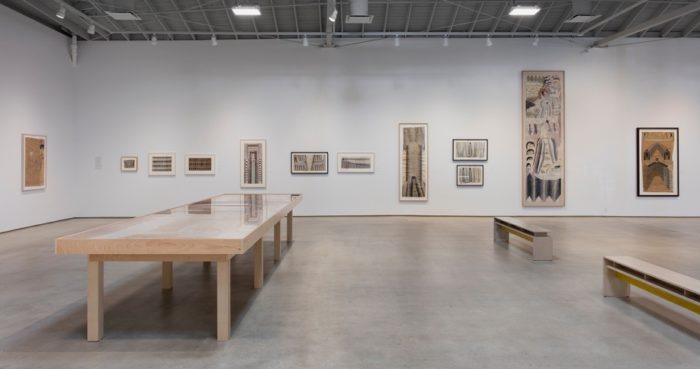 This context led Ramírez’s work to be defined as outsider art when it started to gain popularity in the late 1960s. Outsider art is a subcategory of autodidactic art, but it describes art with a specific relationship to psychopathology. As it is formulated beyond the limits of art institutions, the concept of outsider art is relatively new. The term was first developed in Morgenthaler’s study A Mental Patient as Artist: Adolf Wölfi (1921) and Hans Prinzhorn’s Artistry of the Mentally Ill (1922). Morgenthaler and Prinzhorn were familiar with the concerns of the avant-garde in the early twentieth century and claimed that the work they were studying was in line with certain concerns of these historic movements. During the second half of the twentieth century, the artist Jean Dubuffet would continue this radical appreciation of outsider art using the term art brut, which he defined as a practice that is passionately personal and posits a social challenge. The valorization of this type of art during the 1960s and 1970s (in 1972, the critic Roger Cardinal systematized the ideas of Buffet in his book Outsider Art) resonated with the era’s spirit of nonconformity. It’s no surprise that Ramírez’s work gained visibility during this period with the support of two artists: Gladys Nilsson and Jim Nutt.

However, questioning the legitimacy of Ramírez’s diagnosis also problematizes the appreciation of his work as a categorical example of outsider art. If we stop associating him with this context, his drawings could be seen as autodidactic representations of known figures and elements that rely on certain line variations reminiscent of local and vernacular ornamentation– able to evoke The drawing method of Adolfo Best Maugard. But this categorization would also fail to fully define his work. Some of his pieces feature gestures and visual solutions – such as accumulation, repetition, and a sense of horror vacui – that are common in the works of artists who are representative of outsider art. A piece like Untitled No. 79 (Arches) demonstrates Ramírez’s obsessive repetition and extension, as the profusion of ornate columns and arches in the drawing provokes a hypnotic effect. Between Outsider and self-taught art, the work of Martín Ramírez is difficult to categorize.

Another issue that problematizes the simple categorization of Martín Ramírez’s work is its transnationality. Ramírez’ drawings are filled with imagery that directly relates to his life in Mexico, such as charros, but his perspective is also uniquely American. Rather than comparing a rural Mexico to an urbanized, motorized United States – a reoccurring cliché in commentary on his work – his imagery is the product of a perspective he developed by reading a range of publications while institutionalized. The influence of his reading can be seen in the colorful cars drawn in Untitled (ca. 1950), which appear to depict the latest car models from the period, or more clearly in Untitled (Male figure, Bull, Horse and Rider) (n.d.), a piece that includes an advertisement for toothache medication. This piece incorporates a drawing of a charro riding a horse, a bull, and the advertisement featuring an Anglo-Saxon man grimacing with pain and touching a hand to his face. These peculiar juxtapositions speak to the transnational character of Ramírez’s work, although they have also been interpreted as surrealist, just as Octavio Paz did in his classic essay on the artist he wrote for the catalog of the exhibition Martín Ramírez: Pintor mexicano (1885-1960) presented at Centro Cultural Arte Contemporáneo of Mexico City in 1989.

Although Ramírez’s work eschews easy categorization, there is one aspect of it that cannot be ignored. As Josh Kun states in the exhibition catalog: “”In all of these labels, what has been lost is Ramírez’s status as an immigrant laborer who became an immigrant detainee diagnosed with dementia; what has been lost is that Ramírez made art from the position of being unfree.” Seclusion, confinement, and isolation are recurrent themes in his work. While many academics have considered these themes to be peripheral, there is a strong sense of seclusion and confinement in the frames Ramírez draws around his figures. Charros, saints, virgins, animals, and other characters appear to be imprisoned within the distinct perspective games that frame them. Courtyard (c. 1953) (not included in the exhibition) is particularly expressive in this respect. In the drawing, a character –Ramírez perhaps – is framed by a structure reminiscent of a ward in an architectural surveillance system. Beyond it, there is a group of animals who also appear bound by a frame ensuring their confinement in a world without escape. Untitled (Man at Desk) (ca. 1950-57) can be seen in the same way as a man is seated within a frame, in front of a table and with a pencil at hand. It is a scene that possibly evokes Ramírez’s everyday life in confinement. Above his head, a train passes, as if floating in space. As if illustrating an imaginary scene, the artist draws the man at a desk anchored to the floor while the train moves freely through a plane that does not correspond to his reality. 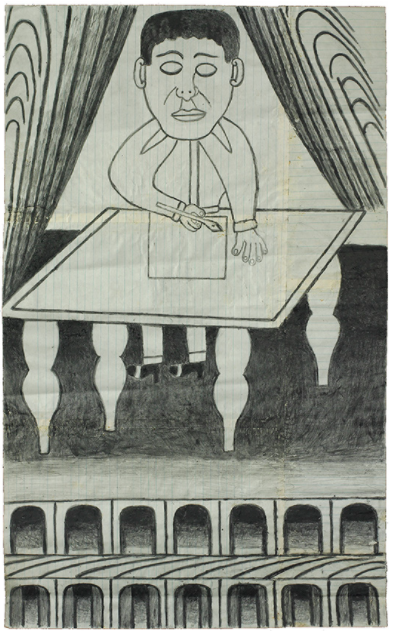 These examples can be associated with a certain intentionality found in Ramírez’s work addressed in the exhibition catalog by Rubén Gallo. With additional written contributions from Jamillah James, Gladys Nilsson, Jim Nutt, Mark Pascale, and Harriet Stratis, the catalog offers diverse, and at times contradictory perspectives on the Mexican artist which broaden the discussion of his production and offer an important contribution to the study of his work. The exhibition, on the other hand, besides presenting Untitled (Scroll), works are grouped together based on recurrent motifs and figures such as characters and animals, tunnels, trains and vehicles, architecture and landscape, and abstractions. This arrangement is, to a certain extent, contradictory to the writing in the catalog that seeks to problematize simple categorization. However, it also allows viewers to see the variations in Ramirez’s work in the context of recurrent imagery. If the catalog complicates our understanding of the artist’s biography and production, the exhibition offers a vision of the multiplicity and variations present in his artwork.

Daniel Garza Usabiaga holds a Ph.D. in History and Theory of Art from the University of Essex, and postdoctoral studies at the Institute of Aesthetic Research of the National Autonomous University of Mexico (UNAM). He lives and works in Mexico City.