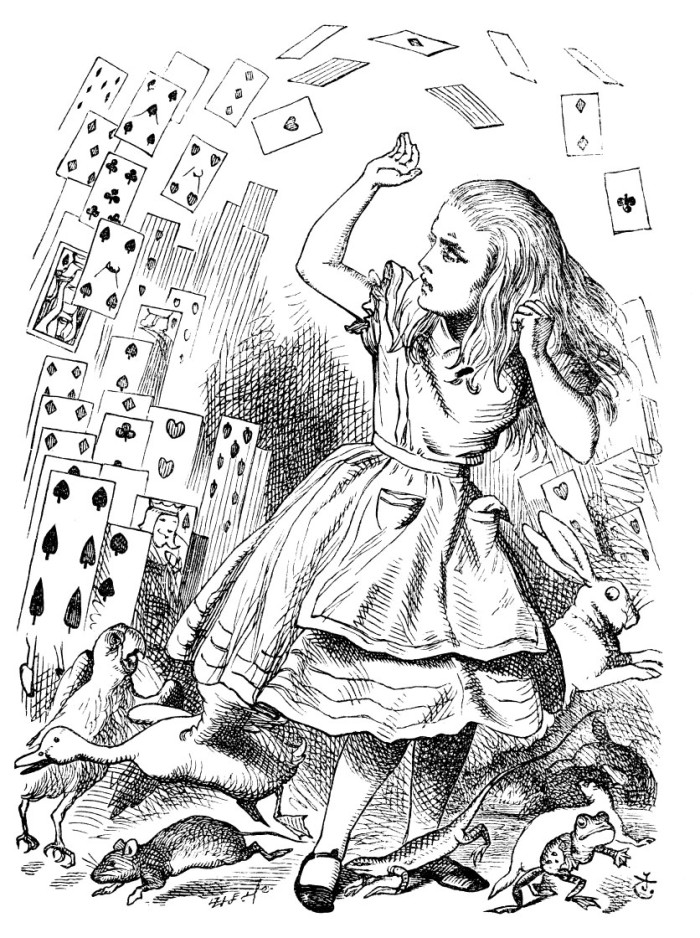 The Judgment of the Queen of Cards

In Wonderland, Alice finds herself as a defendant in a trial. She hears the queen announcing that her sentence will be delivered first, followed by the verdict, and Alice retorts this is nonsense. The queen orders her to be silent, and she responds that she will not obey her command.  The queen then pronounces the sentence: Alice is to be beheaded. Alice then replies that no one cares about them (the queen or her court), as they are nothing more than a deck of cards. She screams as the cards hurdle towards her. She tries to knock them down but then finds herself by a river’s shore, right where she had paused to read before the rabbit appeared and who she followed to the underworld. Her head rests in her sister’s lap, who removes the dried leaves that had fallen from a tree onto her face.(1) Their adventure comes to an end, and soon after the book concludes.

After hearing her sentence, Alice wakes up in another world. She had gone from Wonderland to the next land, where cards were no longer cards but dead leaves. That following land is her former land, the previous to Wonderland – the everyday life land from where she has not come out of even though she drifted off into another place. Yet the land she has returned to is not the same as before, since it has been revealed that the same leaves that fall from trees here are also cards of a deck that exist in another place. Alice thus awoke in a third land.

The land that Alice now enters contains the previous land and explains it . The manner by which the next land – the new wakefulness– grants meaning to the previous one – the dream – is through metaphor (where “leaves” is the same as “cards”). Beyond bringing together two worlds and serving as a vehicle from one to the other, metaphor constitutes a new object, a work of art.

The first thing Alice – or us as readers – can observe upon her return denies the last observation she made in the other world before leaving it. “You are nothing but a deck of cards,” said Alice, which, as she wakes up, proves to be a fallacy. Her attackers were not just cards: besides being a court that could kill her, and a deck of cards incapable of the same, there was a third possibility: her attackers were tree leaves, not attackers.

It may not be possible to remain in a world where the point has been reached to say: “You are such a thing.” The judgment of identity marks the end of the world where judgment is made, and gives way to a new world were such observed identity is portrayed as provisional, and as one of several possibilities (“You are such a thing and such other thing”). However, is it enough to emit a judgment on identity to cross over into another world, freeing oneself from the previous judgment, or is it necessary to suffer an attack after such enunciation, as the one Alice suffered from the decapitating cards and to wake up in another world? Shall the subject try to defend herself? Must she alert against the nonsense of the sentence’s proclamation and note the inanity of the judges? It might thus be necessary to cry out as Alice did, “half in fear and half in rage” (124), to signal the unfolding between resistance and ailment, between desire and acceptance – for a crack to open and to bring forth the awakening into the next world.

The leaves of the wakeful state, those that had turned into cards during dreaming, become dead leaves that have fallen off the trees. It is only after dying and detaching from their world (the tree), that the leaves can resemble and become something else. The fulfillment of the sentence – death – is the awakening, the end of a world and the beginning of another. Yet neither is her head chopped off, nor is it the end of Wonderland, as long as we read the book, and as long as fallen leaves remain cards from now on. As such, Wonderland will inhabit the land by the river’s shore, and leaves don’t ever die, because they change into cards that haven’t stopped falling. The passage from one world to another does not imply the annihilation of the previous one, but it entails its closure (nothing more happens in Wonderland after the sentence; events come to a halt, time runs out).

Let’s say that the work of art is produced in the instance of the awakening, at the blurry moment of being out of place while recovering one’s place and experiencing, and therefore accepting the duplicity of such a place. In the awakening the image remembers its dream, explains its composition and shows that it is an object made from two worlds and twice over. It is not Wonderland, which is the product of the dream, nor is it the land from the wakefulness prior to Wonderland’s dream, which is the material reality, but it is the land where you wake into after the adventure. The book, Alice in Wonderland, is the evidence of the end of the world and the beginning of a new one. It represents the contour and the end of Wonderland and of the land of materialism, therefore proving that it can also be contained in another land, or come to an end by a subsequent awakening; or it can be told in a larger book, which can be contained within another book, and so on.

The work of art is the framing mechanism. As it seals worlds, as it gives evidence of the finitude and the limitations of worlds, it transcends them and reveals that the number of worlds is infinite. The work of art saves the world as far as it enunciates, creates, and is the end of the world.

The sentence can’t be fulfilled in the land where it was proclaimed (not only is Alice not decapitated by the cards, as she disappears from the land where she was judged and surfaces in another, but cards can’t cut heads); then another world opens so this may be accomplished. As the sentence is fulfilled in this world, it also affects another subject. In the land where Alice awakes, trees have lost their leaves, or some of them: besides being a metaphor for the cards, leaves are also a metaphor for Alice losing her head (as they are both the beheading weapon and the beheaded). In the wakefulness following the dream of the identity judgment, the multiplicity of identity becomes evident: if cards are not just cards, but are also leaves, then they can also be heads and an infinity of other things.

The trees that lose their leaves without dying are a metaphor for Alice, of her being condemned to lose her head, yet not dying. The metaphor by which one circulates between one world and the other is a solidary operation. When Alice moves on to the next land, the sentence can be fulfilled in the trees, without violence and by virtue of a law (gravity) which Alice can understand and accept. From here on, Alice will survive the third world, that in which the sentence is fulfilled by a work of art, by living in the trees that have taken her place, transformed into those who by solidarity transformed into her.

Besides being possible through the metaphor of the trees, salvation – the awakening –  occurred thanks to the merciful gesture of Alice’s sister, who wiped the leaves from her sister’s face. In danger of falling, Alice’s head has been literally held in the dream during the trial, by the body of her akin.

The Judgment of the King of the Worlds

There is another trial that, as in Wonderland, closes a world. Nevertheless, the accused cannot slip away from this trial by declaring it nonsense as Alice did, since the trial has and grants meaning to everything that precedes it. The defendant can’t escape by emitting a judgment of identity that proves limited, or by challenging the ban on speaking, or by crying out. He knows why he is being tried. Contrary to what happens in Wonderland, there is no work of art on the other side where judgment is fulfilled; it is only fulfilled in one’s own body. There is no other place. Judgment Day comes “just as when one enters one’s house and rests one’s hand on the wall only to have it bitten by a snake” (Amos 5:19). (2)

Jesus separates one from the other. He places the just to his right and invites them to receive “the legacy of the kingdom prepared (for them) since the creation of the world” (Matthew 25: 32-46). He gives them the world of salvation, which is the real world (which is the next land and is the previous land – like the one Alice awoke into-  which has always been there, along and during the other land). He explains that he does so because they gave him food when he was hungry, and they gave him drinks when he was thirsty, and took him in when he was homeless, and dressed him when he was naked, visited him when he was sick and resorted to him when he was in jail. They ask him when they did that (as if they had done it in a dream, or in a world they have forgotten), and he replies: “I assure you that whatever you did for one of these younger brothers and sisters of mine, you did for me” (Matthew 25:40). The sentence does not fulfill metaphorically as in Alice in Wonderland, but literally and eternally. Instead, the work that is judged is done with someone that is in the place of the other, with a subject that is a metaphor of the King.

Is the work of art a work of mercy?

Can it be stated that an artist, with his work, has fed the hungry, has quenched the thirsty, dressed the naked, sheltered the homeless, visited the sick and attended the prisoners? That is to say, can works of art be metaphorically taken into account on Judgment Day? Can we say an artist does – even if not literally – merciful works? Even if it can’t prevent the subject from being judged, as it prevents Alice’s judgment in Wonderland, can metaphor save him on Judgment Day?

If a work of art is a world that can be entered, would it be fair to say that the artist has given a world to the one that was lost, who judged and was judged? Then the artist can be seen as the tree that bears fruit, thus will not to be thrown into the fire, like the tree that does not bear it (Matthew 7:19)? Will the artist be judged as one who complains with the law, since he lives by the law of metaphor, and this, like the law of mercy, seems to come from one principle, which is to reconcile worlds and set a thing in the place of its akin?

In the poem “The Conundrum of the Workshops” by Kipling, the devil tells Adam, who has just made a drawing on the floor: “It’s pretty, but is it art?” and then asks the same question to all of Adam’s successors who make things. Perhaps there might be an angel who says to us, to Adam and his sons, every time we finish one of our drawings, every time we make one of our metaphors: “It’s art, but is it a work?” 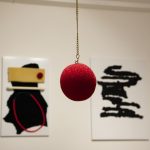 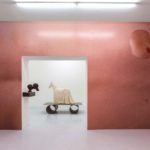 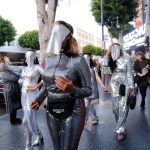 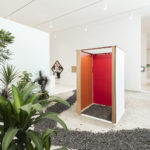