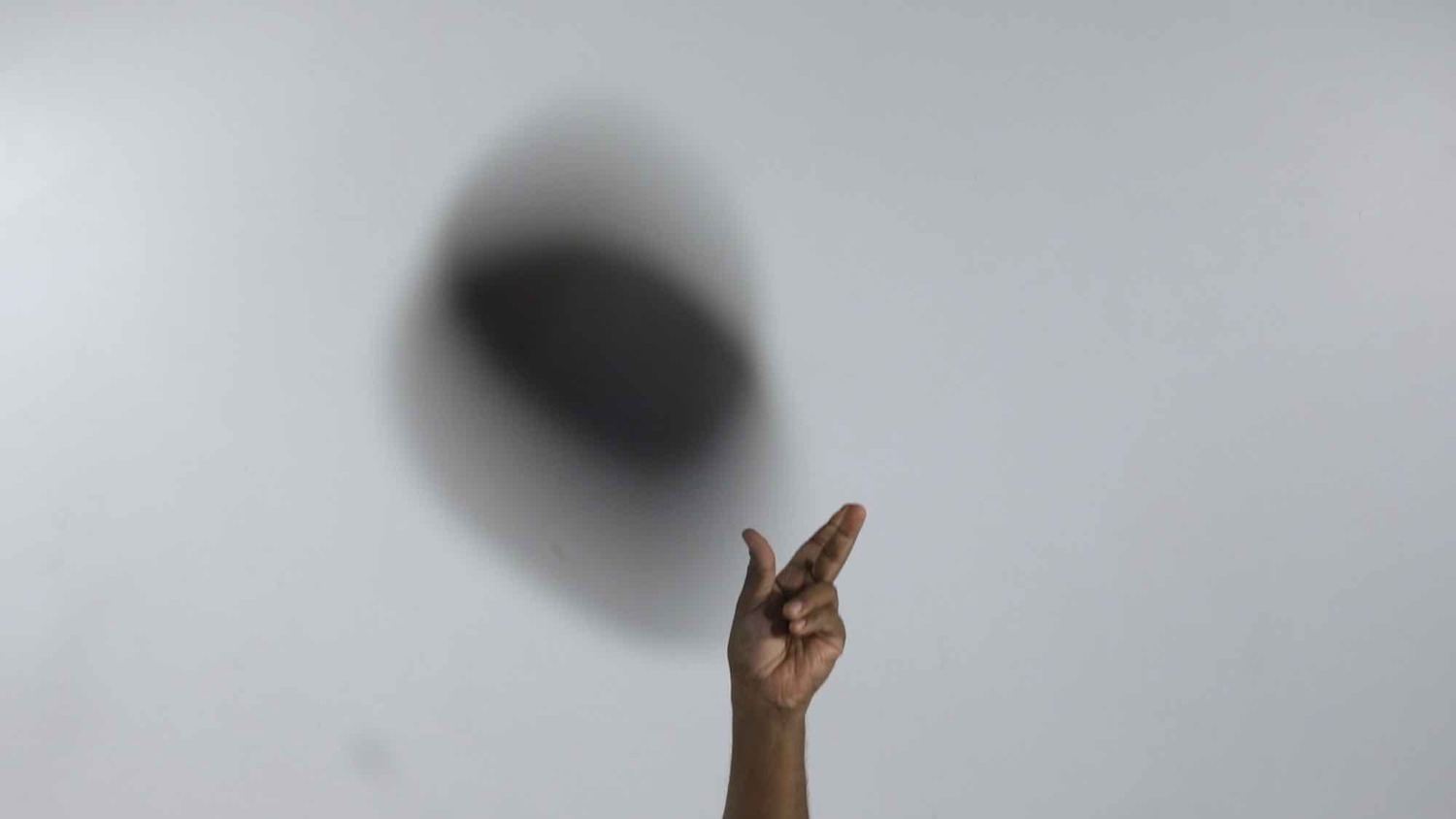 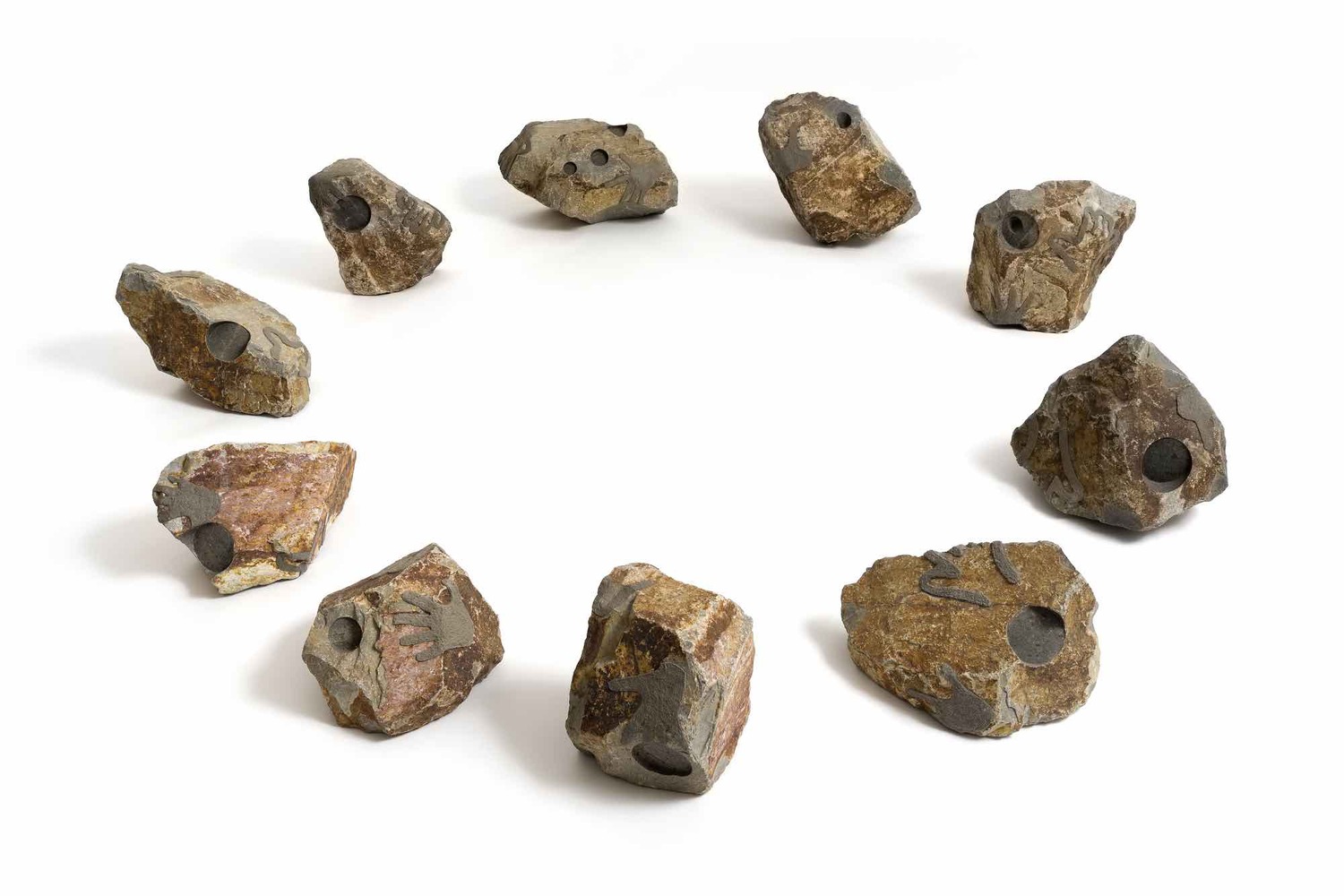 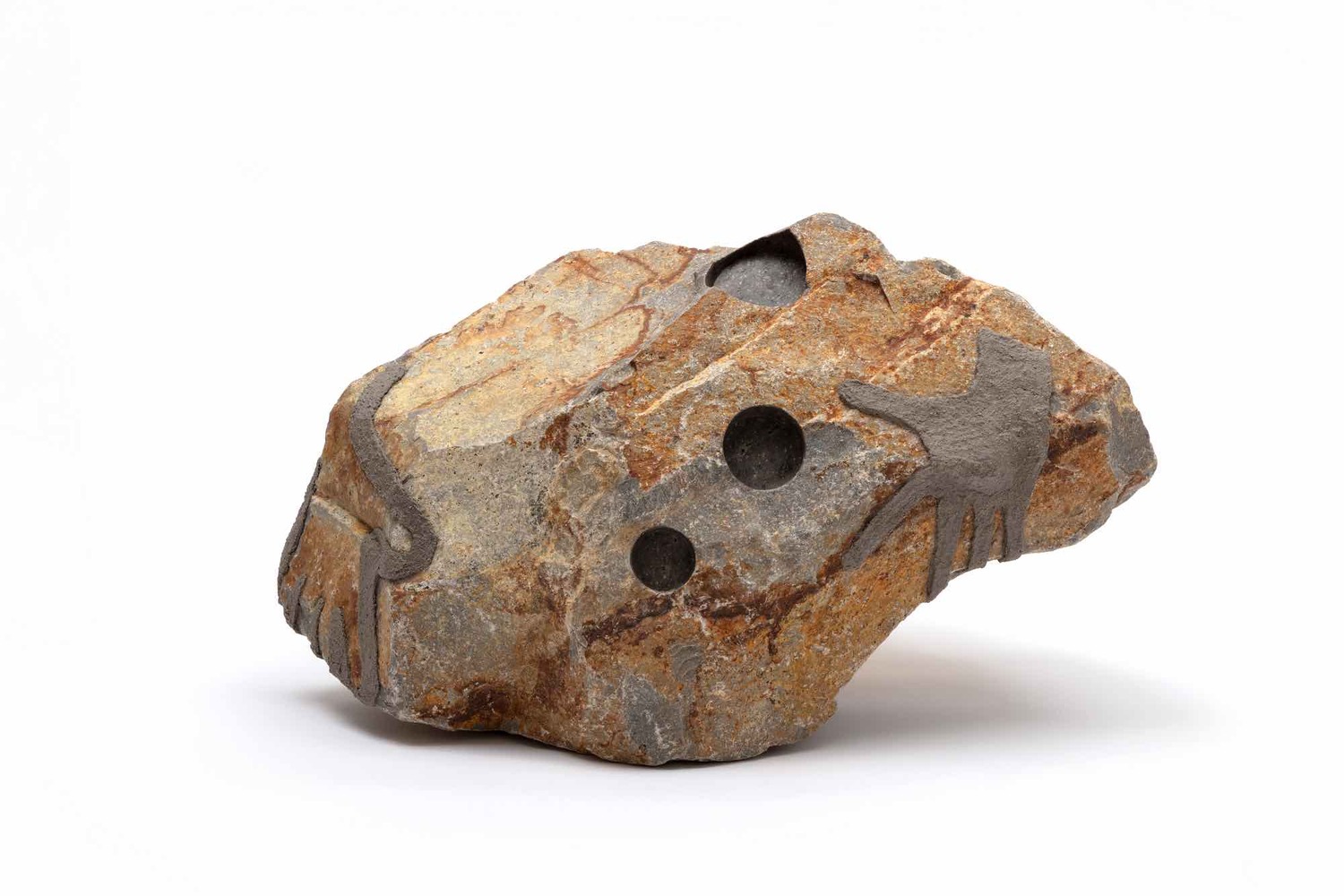 Egill Sæbjörnsson: Given that everything on Earth comes out of magma, or that living creatures descend from inanimate materials, are humans walking and talking stones?

Uncertain Allies, a monographic exhibition by Neha Choksi, features sculptures, painted wall works, and a newly produced video. Due to the pandemic, we have pivoted to an online presentation. Not lost upon any of us, however, is how much this now virtual offering by Choksi is meant to be predicated upon a direct haptic and spatial engagement with its objects. We are grateful for her generosity in allowing us to move in a direction that privileges vision over other senses.

The focus of Choksi’s efforts is stone that is touched by human activity, and human activity that is touched by stone. Uncertain Allies brings geologic and cultural timescales and agencies into uncertain but unavoidable conversation. To quote medievalist Jeffrey Jerome Cohen, who wrote eloquently about geophilia in Stone: An Ecology of the Inhuman (2015), stones are “ancient allies in knowledge making.” He goes on to say, «A rock is not a construction or a concept, not dead matter or pliant utensil. Whether a pebble or a volcano, a mountain or a meteor, a stone is a passage into action, a catalyst, a cause.»

As she contemplates stone, Choksi believes new ethics are needed for humans to engage in any relation, spatially or temporally, with this primary matter. Bringing time and agency into play, Choksi contributes to such through the artworks of Uncertain Allies, in ways that are both earnest and absurd. She hopes to enable us to think beyond knowable durations, movements, and scales that make sense to us.

Rock is vulnerable to time, nature, and the forces it exerts upon itself. Despite its obstinate presence and apparent blankness, rock is, to the artist, magic and enchantment in practice. We know its timescale, its condensed energy, and we marvel. In scope and proportions, rock as matter enlarges our sense of time, slows down movement, and engages us with its agency. In relation to it, our agency seems comparatively minor, even as we center and prioritize our understanding and experiences through our capacity to act upon it.

Foundationally, the substance we call «paint» is like river meeting mountain. Rain washes rock clean, revealing, unearthing, displacing. Liquid binds with crushed mineral. Even as color delights Choksi, paint as a vehicle for color confounds her. She adores it, and yet, her comfort is challenged by the extraordinary disturbances of the earth’s crust and the huge spatial displacements involved in transporting pigment, which ultimately arrives at the surface of her artworks. Reflecting on these processes, Choksi makes use of unsized canvas and linen, fabrics historically associated with the discipline of fine art painting. She coaxes these art materials into shapes that are visually ripe with the forces of gravity and time. Choksi then selectively applies raw pigments extracted straight from the earth onto the forms. She also applies pigment onto bath towels and other textiles normally associated with intimate bodily ministrations. In some pieces, these domestic items added amongst the layers of linen and canvas, personifying the effort of cultural production.

In the majority of wall works in Uncertain Allies, Choksi enlists rocks as tools with which she mars the surfaces of the fabric through repetitive pounding. Distressed by this action, the material is marked and torn. Subject to the fraying friction of raw rock on fabric, the works evoke the passage of hard time on cultural objects. In this way, the wall works record the uncertain encounters between human and rock agency. By including specimens of unaltered stone in the final compositions, the causal and originary agency of stone is indelibly linked.

Two works from 2020, Formative years (uncertain allies) and Non-attachment, depend formally on a balance between rock and painted panels that represent an «untouched» phase. The title Non-attachment comes from an oft-used translation for a Jain concept, aparigraha. One of the five vows undertaken by Jain ascetics, aparigraha is detachment from all objects of the senses and from possessions. For lay practitioners, it involves a commitment to being non-possessive or not being overly preoccupied with material things.

In Choksi’s 2017 sculptures, collectively entitled The Weight of the Cave, she began by boring into the faceted surfaces of basalt boulders. With this action, she infinitesimally mimicked the vast mining and quarrying industries that punctuate the earth’s surface. Chipped fragments from those precisely cored circles were then gathered and hand ground into pigment. As she engaged the rocks through her labor, they provided haptic and proprioceptive input. Choksi was made aware of her body by lifting and budging, pushing and pulling, the dense igneous matter that was just at or beyond her capacity to lift. At the specific points where she gripped and attempted to lift or move the weighty stones, Choksi marked her efforts by tracing an outline of her outstretched hand in thick pigment made from the rock dust her boring efforts yielded. This act of inscription harkens to ancient cave paintings made by earlier humans.

In both The Weight of the Cave and the wall works, mineral extraction encounters its origin; that is, pigment confronts rock, within the same spatial frame. Through these pieces, Choksi draws attention to time—chronologies literally embedded into fabric and boulder. There is the time of the rock and pigment. Then there is the time taken by the artist to attack the fabric with rocks or daub it with paint. Psychic and material energy comingle.

Choksi’s 2021 video, Charge (friends in Los Angeles and Bombay), 2017-2021 is built upon footage from a 2017 work, A Stone’s Throw. In both, her interlocutors are prompted by a simple request. Choksi asked friends to choose a stone that fit into their hand and throw it directly at the camera. Picking up a pebble and then giving it a cursory examination before dropping it is a common diversion. As an action of primal control and engagement, testing a rock’s weight, lifting it up high by retracting the arm from elbow to hand, and then letting it go with a forward fling into the air can be sheer delight. This same act, when directed at others, be they inanimate or animate, is recognizable as that of the hungry, the desperate, the frustrated, the angry, the oppressed. Such throwing has emotional heft, whether it is full or devoid of emotional intent.

In Charge, as in A Stone’s Throw, the framing of the footage captures only the articulated movement of arm and hand as a stone is released. These sequences, filmed against a spare, white backdrop, are paradoxically anonymous and deeply individualized, as each hand possesses distinctive features. The agency of the throwers is critical to the sequence, as each stone is propelled directly at the conceptual barrier of the «fourth wall.» Stone is a locus that concentrates and communicates force. As witnesses to these acts, our impulse is to physically react to each percussive shock.

For Charge, Choksi intercut the sequences of thrown stones with still images she has curated of, among many things, award-winning photographs of natural events and phenomena, ancient cultural sites, scientific discoveries, historic artworks from many world traditions, architecture, contemporary artworks, and references to her own 2017 project, Faith in Friction, which was performed and filmed at a Jain ashram under construction in India. Each of these interjections signifies conscious human interventions onto the Earth, whether additive or subtractive. Midway through the loop, the sequence plays out in reverse, with the stone projectiles reentering the hands of the throwers. Substituted for the still images of cultural phenomena in the first phase are recent photographs taken by Choksi at the Huntington Library Botanical Gardens and a selection of digital images she collected of sunsets posted on the Internet from all over the world that were date-stamped in a period between June 10, 2011 and June 9, 2012.

In the broadest sense, Charge points to Choksi’s interest in the concept of multivalency. In the field of material culture studies, this term refers to the ability of a single object to represent more than one thing at once. In Jainist philosophy, the idea of multivalency is present in the doctrine of anekāntavāda, which is an ontological assumption that the past is beginningless and the future is endless. Any entity is at once enduring but also undergoing change that is both constant and inevitable. According to this doctrine, reality has many forms as experienced by entities and all must respect the reality perceived by the other. Through this awareness, humans can find ways to resolve conflicts. In Charge, our conflict as humans can be understood in relation to our economic reliance upon the extraction of natural resources and upon the inevitability of climate change on Earth, circumstances from which we cannot materially extricate ourselves.

Three questions have motivated much of Neha Choksi’s recent artistic inquires: Who am I? Who are we? and How do we sustain existence as a species? With Uncertain Allies, she continues her work about rock that started with her 2016 solo exhibition, Stone Breath Mountain Dust, presented by Project 88 at Frieze London, and Liberty Matter, her 2017 solo exhibition at Commonwealth and Council, Los Angeles. It also continues efforts undertaken for the 20th Biennale of Sydney in 2016, her 2017 multi-channel film installation, Faith in friction, presented at the Manchester Art Gallery in Britain, and Elementary, a long-term, multi-format project initiated during a 2018 artist residency at 18th Street Arts Center in Santa Monica.