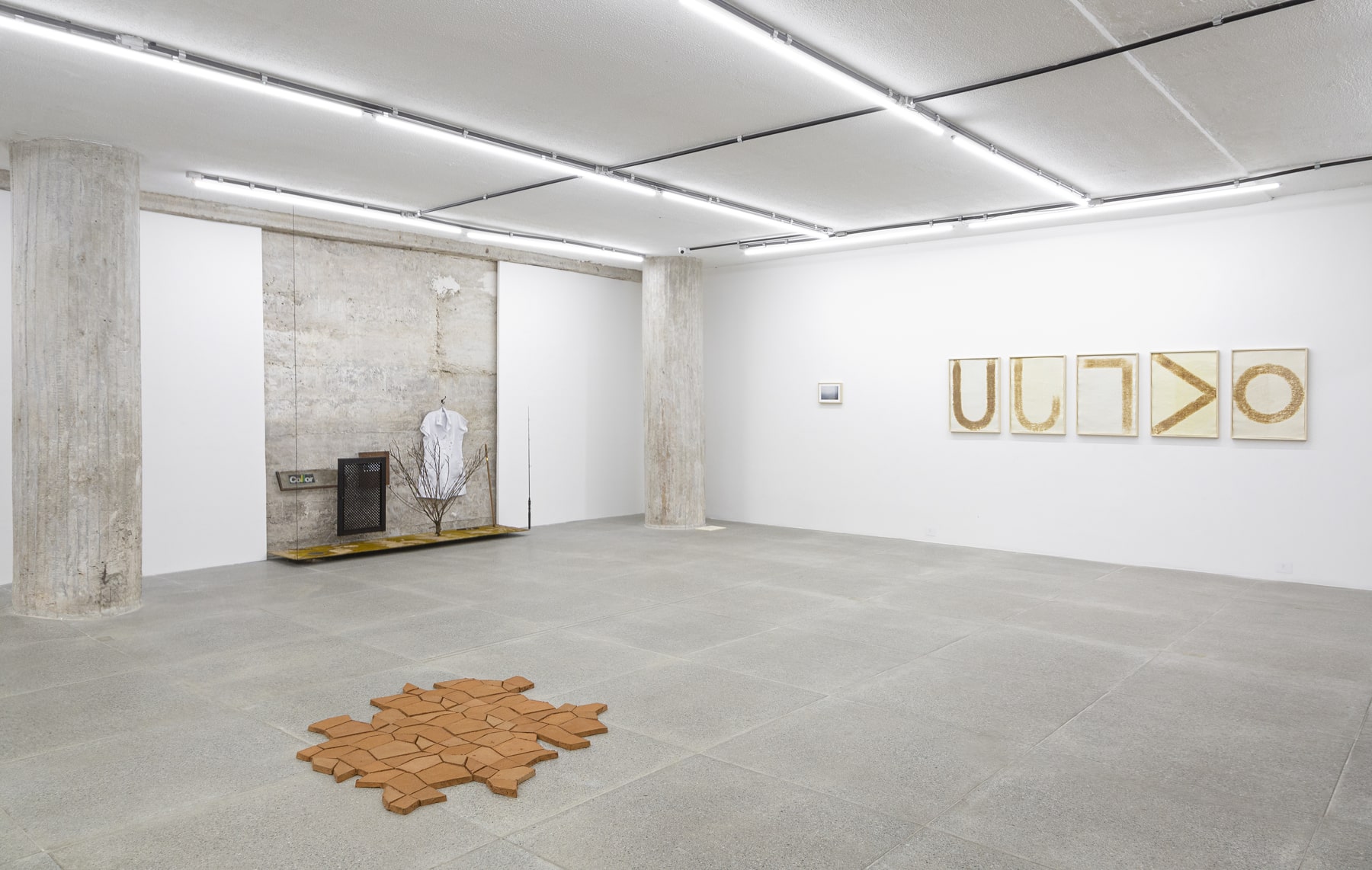 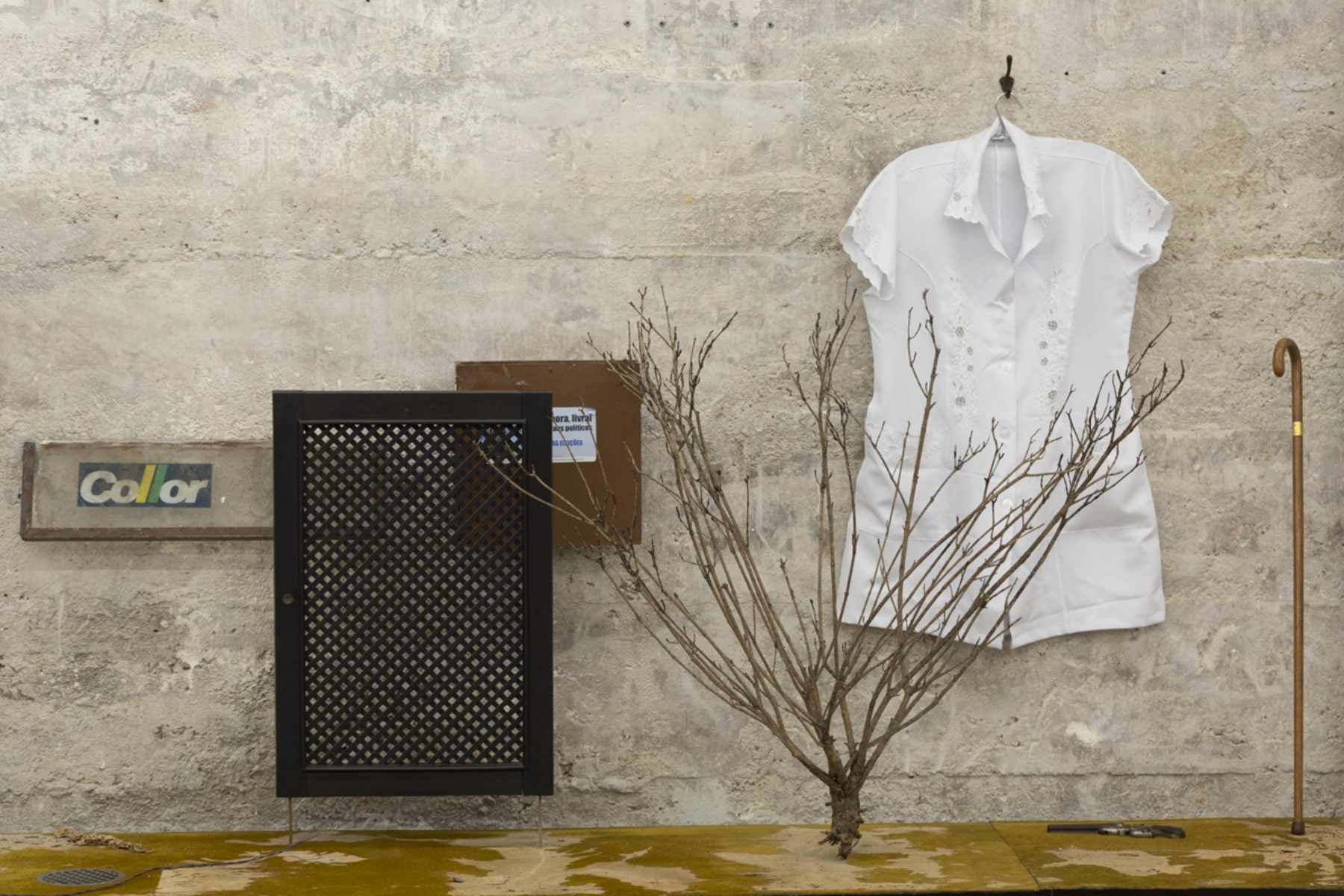 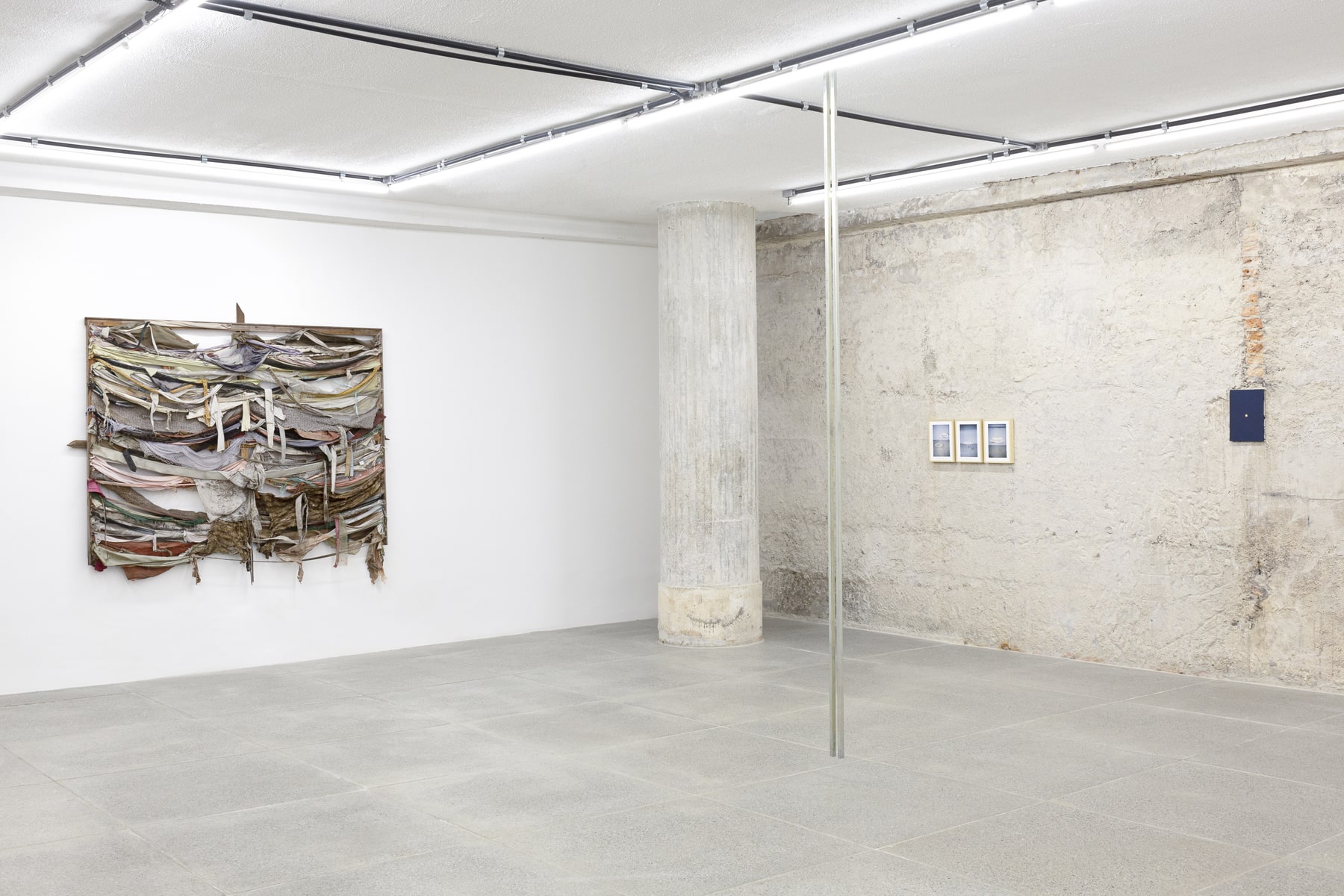 Observed for the first time by Michael Faraday in 1857 and studied by the English physicist John Tyndall, the Tyndall effect is an optical light scattering effect that occurs when the light is dispersed by colloidal particles, leaving fine suspended dust particles visible in the air through a luminous glimmer that passes through trees, for example.

In the collective exhibition with the same name of this effect, Adriana Affortunati Martins, Alexandre Brandão, C.L. Salvaro, Jurgen Otis and Nicolas Bourthoumieux, each in their own language, turn the invisible visible. In the artist’s works, the objects, forms and matter gain their own presence and integrate alternative formal systems whose coherence is unconnected from its initial meanings to show a human, social and political resonance that goes beyond form.

In this way the Belgian artist Jurgen Otis opens a temporal window with the video Are we Arc? The piece —yellowed checkered notebook paper, stapled together in European markets— reflect moments of political change and territories that no longer exist, like old Russia or Yugoslavia. The accelerated rhythm of the image display emphasizes the contrast of time periods, almost creating a fresco of colors that brings forth a utopic temporal horizon.

The recovery of elements from the past also characterizes the works of C.L. Salvaro, although without manipulation or, at the very least, almost without. In the installation Retrospecto (Retrospect), the artist starts from vestiges of a home and transposes to the space of the exhibition a piece of Brazil’s history and the experiences of the occupants of a house, simply utilizing the available elements found and the narratives they may contain, apart from any contemporary urgency. Acting as a kind of archaeologist of the present, in the installation the artist recovers layers of time and roots of a home that voted on Collor, as well as a pistol, bearing witness to the elements present in the installation. In this way, Salvaro’s vision crystalizes a moment, revealing parts of the piece, hiding others and allowing the material to express itself.

Adriana Affortunati Martins, in dialogue with Salvaro’s research, reveals in Helena the poetic beauty of deliquescence in a piece made of fabric altered by long exposure to natural elements in her backyard. The colorful tatters acquire the appearance of abstract paintings, supported by a wooden frame. In the artist’s work, time carries on freely, the objects decay and the beauty emerges from within. Assuming the imperfections in life—and the inevitability of the passing of time—Adriana Affortunati’s work revindicates her ephemerality through the wind and rain that create the work together with the artist.

From raw materials, the works of Alexandre Brandão, in turn, point to the material and tensions that occur when the material is manipulated. Light, heat, reactions that come with the passing of time become tools for design, such as in the series Estudo Crítico (Critical Study) made up of letters from a minimalist alphabet inspired by the embossed alphabet created by William Moon. The gap between the substance and constructed object also manifests itself in the piece Tectônica (Tectonic), in which the artist inverts the passage of time and creates fissures in reality using ancestral construction techniques to create an installation that resembles desert sands.

The impact of the anthropocene and human action on the environment also permeates the works of French artist Nicolas Bourthoumieux. The perception of movement and time, the light, the sublimity of nature and its relationship with the human condition are expressed in a slender sculpture that allows the appearance of a golden sun distinguished on the dark blue background of a painting. Our perception changes as we relate to the piece, which invites contemplation in a place where notions of space and time disappear. In dialogue with the work, a series of photos of a lunar landscape and flickering candle light takes us back to the tension between the natural and artificial, the change from one state or space to another and the perception we may have of those changes.

Acting as anthropologists, the artists of the Tyndall Effect make new matter and resonance from civilization’s waste and debris. Without the use of artifices, they not only reveal the elements utilized but also their metaphorical properties, in the same way that written language can express beyond initial meanings, ideas that transcend mere description. In their works, time, the relationship between the human, natural and manufactured appear as layers left by the tides in intuitive arrangements that escape monumentality to favor the individual presence of the forms
and what exists beyond appearances.

Guided by this proposal, we direct our attention to simplicity, to the essence of what surrounds us, to the poetry present in decadence, in the moment that precedes the final disappearance of what is wasted. Escaping the post-modernist machine, perhaps we can pause the velocity of the increasingly digital world obsessed by the new, clean and passing of time that is seen like an undesirable fatality. So we pause to contemplate the dust that dances, before it lands and disappears, absorbed by the world around it.