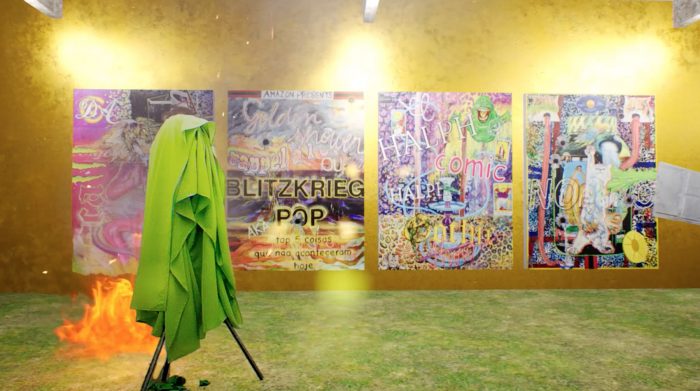 Galeria Jaqueline Martins announces an online show using the gallery’s facilities, which are currently closed, as a springboard for virtual speculation.

The rules that normally apply to exhibition facilities have been suspended in this digital environment. A bonfire burns in the middle of the exhibition room as a bored ghost, captured by security cameras, strolls around the empty gallery.

QUE VÃO QUE VEM is a selection of recent work by artist pedro frança (Rio de Janeiro, 1984)—featuring paintings, installations, videos and collages from the past two years— interfacing with gouache paintings, collages, photographs and videos created by Victor Gerhard (Santa Cruz do Sul, 1936) between 1965 and 1982. Gerhard is one of the objects of research by the gallery, whose mapping of 70s and 80s artists overlooked by audiences and critics alike strives to catalog and provide novel takes on these important productions.

Practices shared by both artists become apparent: the appropriation of codes, strategies and typography from mass media, the fiercely critical commentary, and the visceral use of scenes whose popular resonance is tantamount to an attempts at gauging the absurdity that hovers over contemporary society. If, on the one hand, these questions are brought up more clearly in Gerhard’s gouache paintings—where black paint from tabloid headlines appears to dissolve and lend shape to the actual phantasmal spectra that results from the urban violence that’s being reported on—the more experimental, allegorical videos require a more dedicated exercise in interpretation. Batalha (1980), which at first may read as a simple miniature play set in a garden, can be taken as a treatise where only creative resistance is able to fight State-sponsored oppression. Aside from recent works, the show features two never-before seen projects purposely created by pedro frança for the digital environment: TFME (2020), a rhythmic collage of images that comprise an archive of amulets from Brazilian history and culture, and AMUSEUM (2020), an augmented reality project referencing Brazil’s National Museum fire in 2018. In dealing with the idea of activating historical fragments, both pieces comment on the need to rekindle loose ends and traumatic realities of the past. frança worked with programmer and art director Rudá Cabral to create these works and all digital settings.

The exhibit also questions what space we are talking about as a new show “opens” at self-isolating times when art galleries are closed. Relying on 3D modeling, archival photographs, and gallery security camera footage, the project proposes an exhibit that does not purport to replicate the experience of an actual visit. Still, it does not overlook the fact that the very notion of an exhibition, where artworks are superimposed onto discourse of some kind, implies a certain space of observation and circulation. Thus, the project attempts to sit in a middle ground where, although projected in a real space, it is not limited by the physical, temporal and logical constraints of said space.

This is the first project from Galeria Jaqueline Martins to explore the virtual possibilities wrought by the urgency of social distancing. Other exhibitions are in the works and will be announced soon.