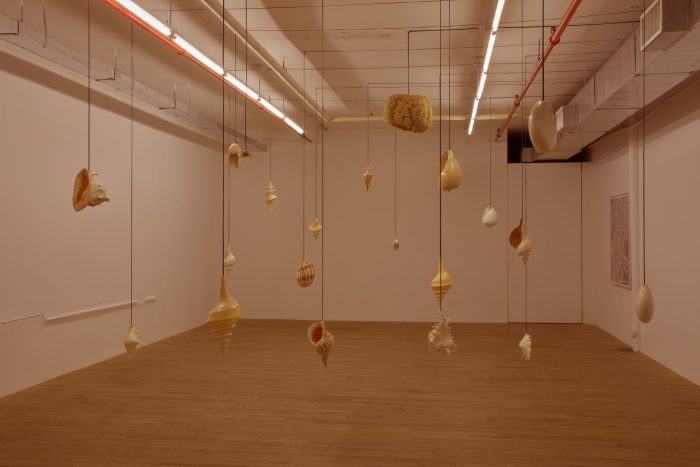 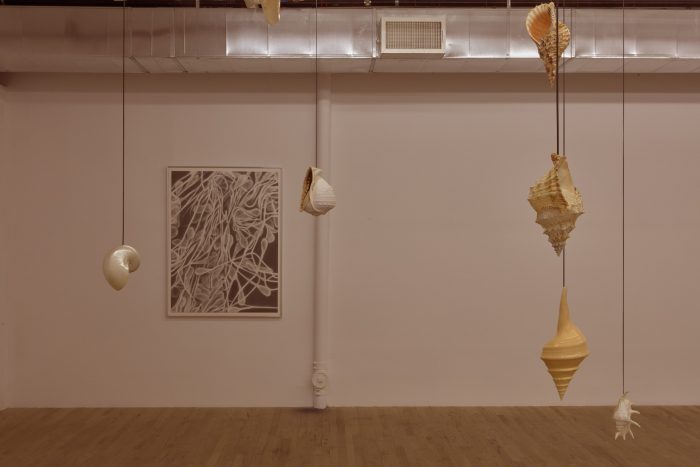 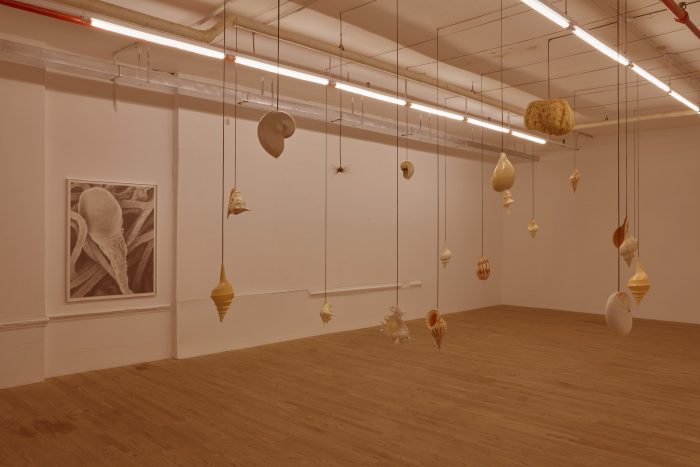 Olivares’s work spans a variety of media, exploring the nature of the contemporary human condition; including themes of alienation, displacement, memory, loss, and connection. The scope of his work shifts from the deeply personal and autobiographical to the universal—a visceral celebration of what defines and unites us as human. This is Olivares’s first solo exhibition in New York after his 2018 show, Moléculas, at the Whitney Museum of American Art.

Fermi Paradox III is a 24-channel sound-sculpture in which sound is emitted from speakers embedded in large seashells suspended from the gallery ceiling as well as from surface-transducers hidden in the walls. Using production methods characteristic of electronic music, the audio installation mixes a range of sources: readings of Schopenhauer’s The World as Will and Representation, examining the fundamental reality of our world; Stephen Hawking’s 50th anniversary speech of NASA, expounding on the possible existence of extraterrestrials; a Gabriela Mistral poem lamenting a lost love; Bob Lazar interviews on his clandestine work at S4; and samples of Nina Simone’s Wild is the Wind and George Harrison demos. Each audio source, whether from a seashell or the wall, emits its own channel creating a dense choral arrangement that
shifts and evolves, drawing the viewer through the space.

This work is Olivares’s third and most ambitious iteration of his Fermi Paradox series started in 2016, produced as a response to Italian-American physicist Enrico Fermi’s open-ended prompt to explain the seemingly paradoxical fact that given the evidence of billions of earth-like planets existing in the universe, and hence a high probability of extraterrestrial life, the human race has yet to make contact with a civilization beyond our own. Since the 1950s, the Fermi Paradox has generated a canon of scientific and statistical responses. Olivares poses a more poetic rumination: that the search for extraterrestrials might be a desire to disrupt the understanding of what makes us human, from submicroscopic biology to the philosophical and spiritual components of our species.

Alongside the installation, Olivares will show a suite of new graphite drawings: sfumato renderings of human sperm and egg based on scanning electron microscope images. Ordinarily invisible to the naked eye, Olivares draws these computer-generated images with an emotive hand. These extreme closeups of concrete biology become abstract at an outsized scale. As with the seashells, the familiar becomes strange.

The title of this exhibition, Naufragios (which translates from Spanish to mean “shipwrecks” or “castaways”, depending on the context) references a 1555 book of the same name by Spanish explorer Alvar Núñez Cabeza de Vaca that detailed a maritime expedition to the Americas gone awry. Cabeza de Vaca’s semi-fictional, semi-autobiographical account describes in great detail his experiences meeting the indigenous tribes as the survivor of a shipwreck in what is now the gulf coast of the United States. The protagonist’s greatest discovery in this foreign land is that search for the unknown is ultimately more of an internal voyage.

This is Bortolami’s first exhibition in 55 Walker, a space programmed collaboratively with Andrew Kreps Gallery, and Kaufmann Repetto Gallery. Concurrent with Juan Antonio Olivares’s Naufragios, Kaufmann Repetto will be presenting Lily van der Stokker’s exhibition of the medicines on the ground floor.

Juan Antonio Olivares (b. 1988) lives and works in New York. He studied Art & Philosophy at Columbia University, New York and at the Kunstakademie Düsseldorf, studying under Christopher Williams. His first major institutional solo show took place at the Whitney Museum of American Art, and he has shown internationally at Bungalow, Berlin; Fürstenberg Zeitgennössisch, Donaueschingen, Germany; and Filmwerkstatt, Düsseldorf. His work is in the collection of the Whitney Museum of American Art, Fondazione Sandretto Re Rebaudengo, and Adrastus Collection.