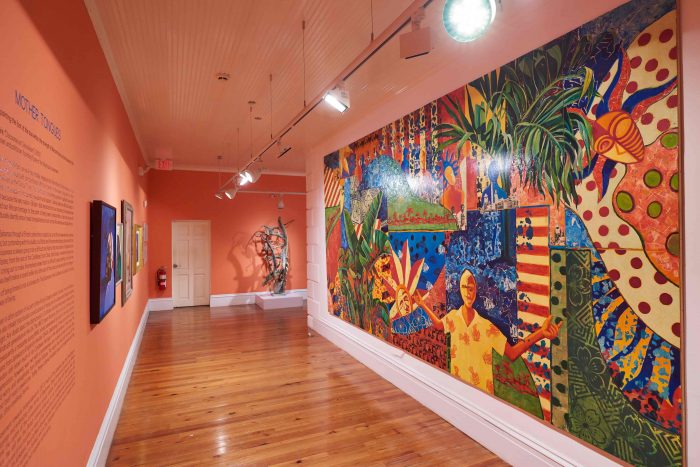 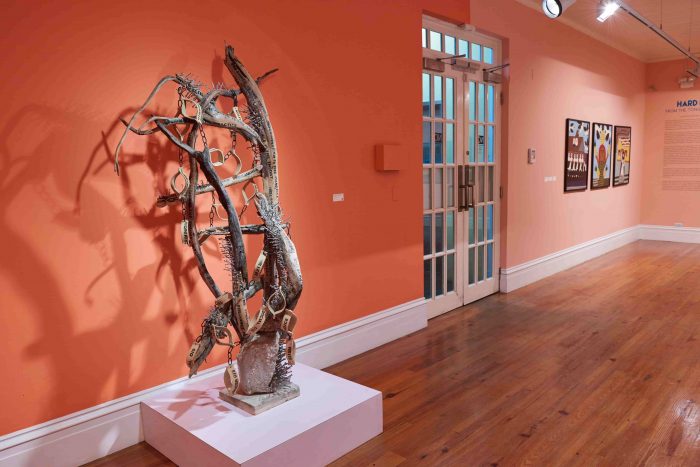 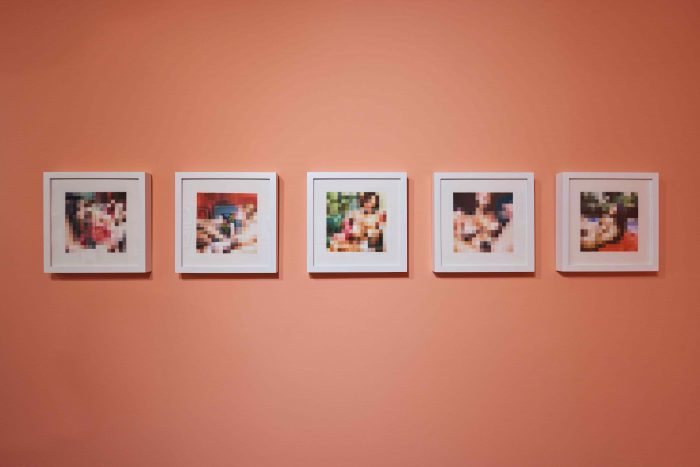 How do we define ourselves? What does a dialect do and, within that vernacular, what does our dissent sound like? Hard Mouth: From the Tongue of the Ocean is a look at the way language—both verbal and visual—has shaped The Bahamas and how we view ourselves. From the way we speak, to the way that we voice our discontent, to the way we envision ourselves as women and as part of the Black Diaspora, Hard Mouth is a call to the “biggity” and bold nature of the people of The Bahamas and a foray into how this archipelago, around the Tongue of the Ocean itself, finds its voice.

The Tongue of the Ocean is a deep ocean trench between the islands of New Providence and Andros. More than just a geological formation, however, the term can also serve as a reference to our oral traditions and the placement of The Bahamas and the Caribbean at the crossroads of the world during the colonial era. Mouths are vessels to deliver history and hands put it to form, for generations afterwards, in books, songs and artwork. We look into the teeth of our past, our tongues, our utterances and the power of language in this nation and its stories. We are a place that has mostly lost its first language, though the southern islands of Inagua and Mayaguana still hold some echoes.

The Lucayans lived here, descended from Taino Indians, who migrated further and further north in The Caribbean before arriving in The Bahamas during the 11th century from Cuba and Hispaniola (Dominican Republic/Haiti). They existed in the thousands before our “discovery” in 1492, marking the start of a New World of colonialism, capitalism and consumption. Columbus’ arrival was the beginning of the extraction and exhaustion of resources from The Bahamas, as well as all the territories across the Caribbean, with this first wave of colonial activity. Britain would soon follow – with our self-proclaimed “little country” at the heart of the action, though we often portray ourselves as passive recipients of these world-changing moments. We are this amalgamation of mouths and moments and ways of speaking and being.

The Bahamas is, however, anything but passive. We have had slave rebellions, political upheavals and quiet revolutions. After a period of lying dormant, it seems we have found our voices once more in the past few years, to once again articulate those things that we will not take.

The exhibition’s four distinct chapters speak to these ways of knowing and articulating ourselves. The first section, Dialeck is a playful take on the Bahamian dialect (the title spelt in Bahamian vernacular) that sets us apart, but also how the practice of intuitive artists such as Amos Ferguson not only give us artistic records of our dialect with how the work is titled, but in many ways the work of intuitive artists functions as an art dialect—commonly understood as art and simultaneously widely derided as less-than or improper.

Biggity follows, drawing on works that speak to the Bahamian colloquialism of being “biggity” or loud-mouthed and assertive. The negative connotations of the term are turned into a positive, as this chapter speaks to the history of revolt and riot and politically charged artwork in the country, with particular focus on the largely sidelined role of women in the nation’s history of speaking up and demanding better.

And those women are still second citizens in The Bahamas. Ain’t I A Woman gives space to discuss the depictions and representations of women. This selection is set against the backdrop of severe women’s rights violations in the country: marital rape is still legal, and the failed 2016 Constitutional Referendum to give equal rights to men and women in citizenship and in the language of the constitution. How we see women, speak about women, and write about women is part and parcel to how we excel or hold ourselves back as a nation and as part of the Caribbean region.

In many ways, our issues with women, with Blackness, with xenophobia, stem from our colonial history, and so Mother Tongues gives us time to consider this complicated double-consciousness. We are a region made of many movements, and find ourselves at once Black African, with white European structures of power. We have this double-consciousness, living in the warped sense of living in past-and-present in post-colonial countries. These experiences are ubiquitous across much of the global South, but when the tourist machine requires a shiny veneer it becomes hard to speak to these issues of nationhood.

Hard Mouth: From the Tongue of the Ocean is a look at the way our speech holds our African history and how moments like the Burma Road Riot, the throwing of the ceremonial mace that resulted in Bahamian independence, and the Suffragette movement, paved the way for Majority Rule. With these moments, Bahamians took their freedom in expressing their distaste at ill-treatment, in how we portray women and how women portray themselves, and in how so many of our stories come from our various mother countries of Britain and West Africa.

Drawing from the National Collection, the D’Aguilar Art Foundation collection and private loans from artists, Hard Mouth: From the Tongue of the Ocean explores our dialects in language and in the practices of intuitive or “outsider” artists, our “biggity” and brazen socio-political commentary, our representations of womanhood, and our transatlantic roots in West Africa with our British colonial history that changed us forever. Our hard mouths have teeth to smile, to bite back, and to remind us of roots buried, but roots that are there all the same.