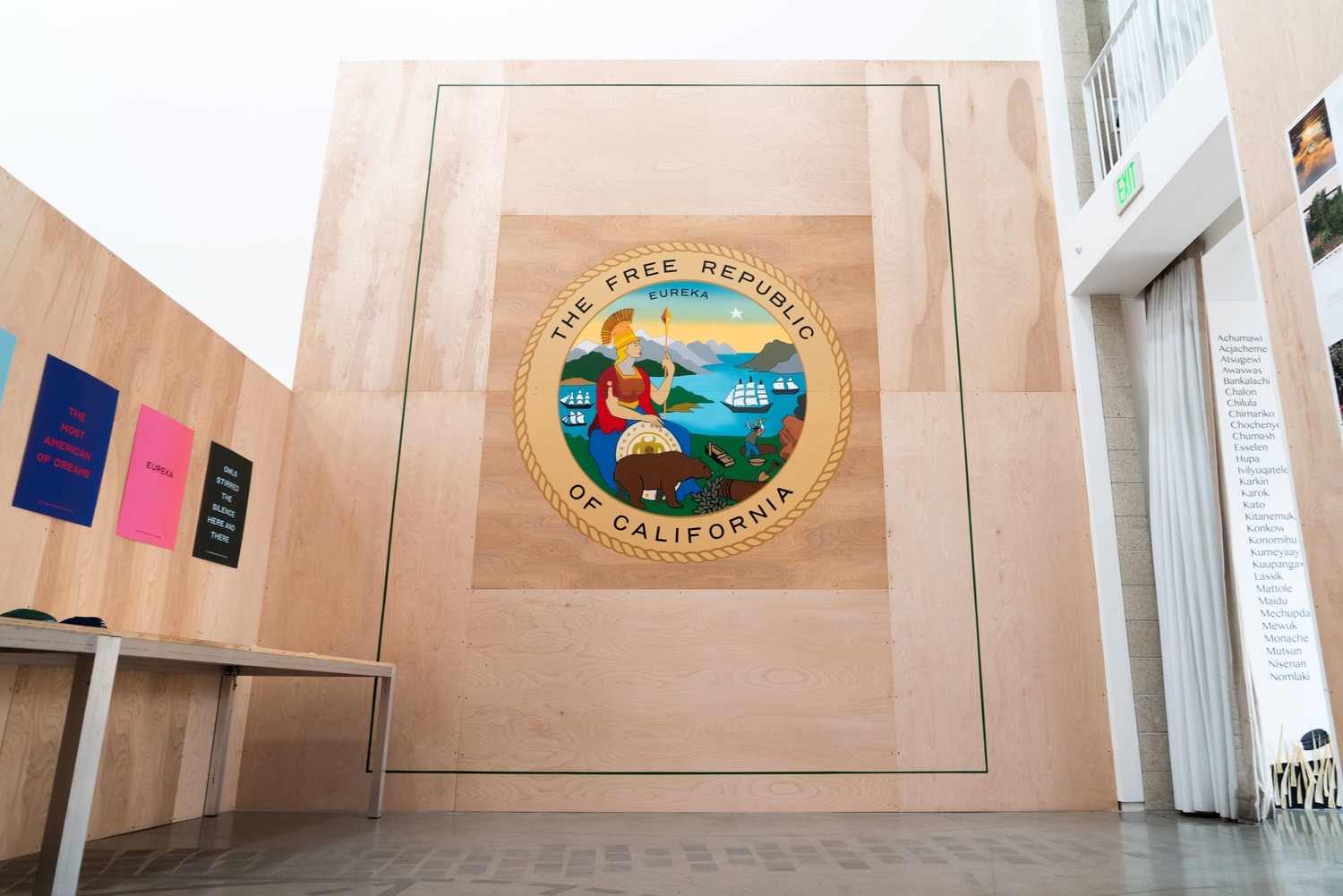 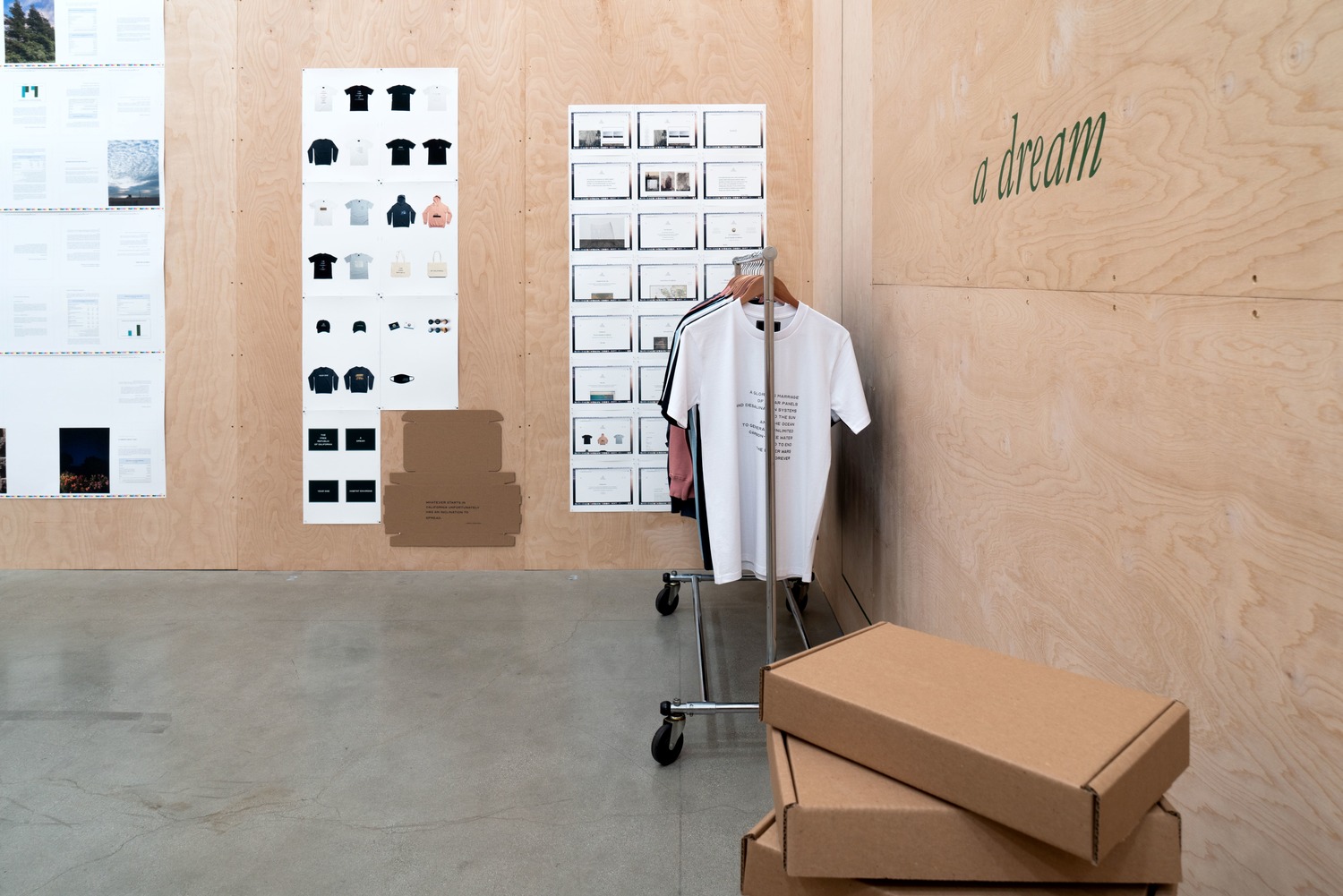 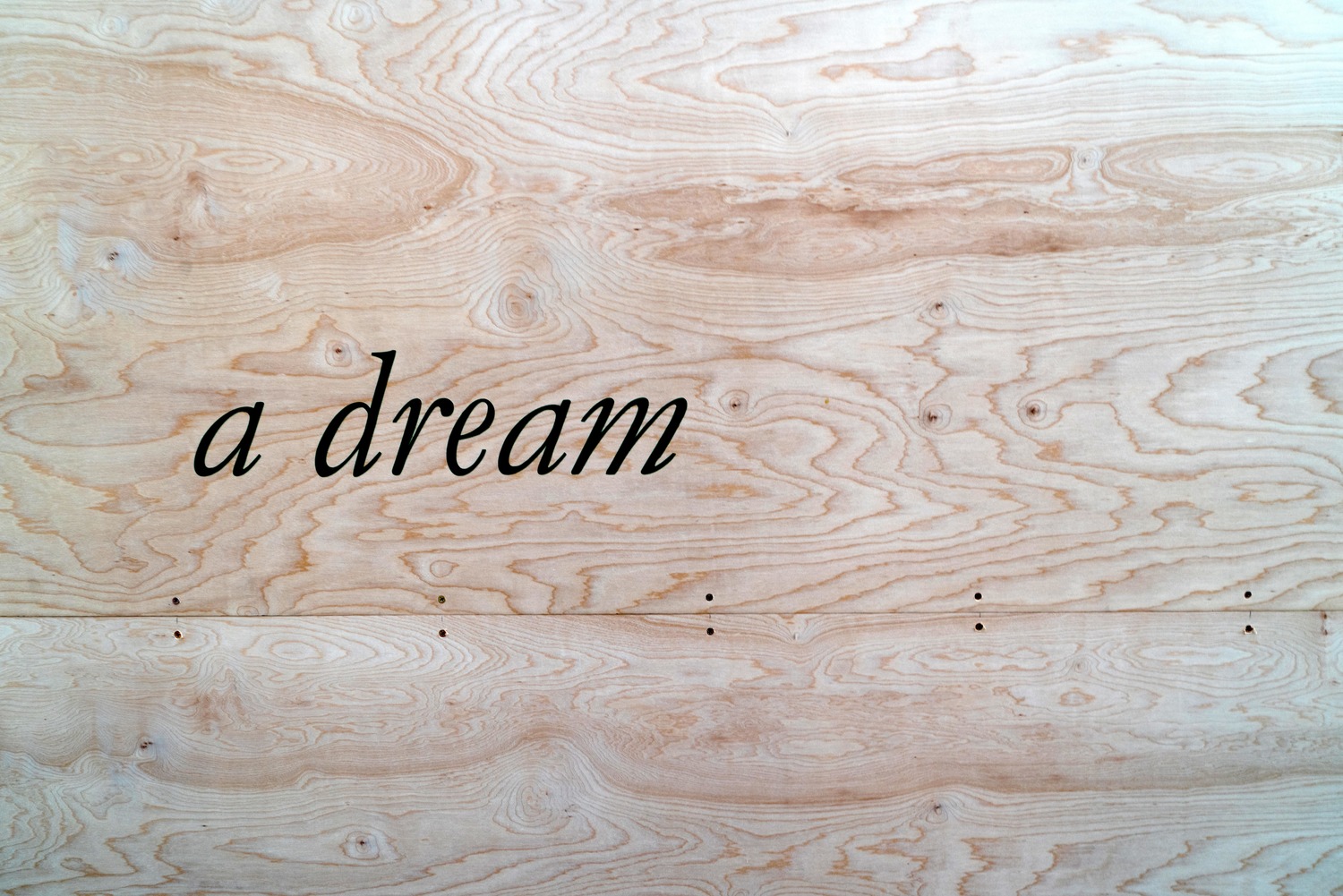 ESMoA announced its reopening on March 26, 2021 with artist Cole Sternberg’s solo exhibition FREESTATE, which virtually opened on October 8, 2020 and, for the first time, is open for in-person viewing through September 18, 2021. This exhibition is one component of Sternberg’s ongoing project The Free Republic of California, a conceptual, agitprop artistic movement. Wide-reaching in its applications—including its own political documents, clothing, and artistic manifestations—this exhibition encompasses sculpture, text, political signage and photography to convey the fundamental core of the project through the lens of visual art. The works serve as a theoretical and artistic gesture for a more enlightened nation through the guise of Californian secession, exploring issues such as human rights, ecological collapse, democracy and freedom. This exhibition is curated by Dr. Bernhard Zünkeler.

“It is exciting to be able to open FREESTATE to the public for the first time, so that viewers can physically experience the origin story of the Free Republic; a concept which has been developing in my mind for over a decade” said Sternberg. “The issues addressed in the exhibition require critical and immediate attention. In light of the shift of federal administration, as well as the pandemic’s hopeful downswing, I fear a collective malaise or false sense of security that distracts from the institutional issues destroying the earth and humanity, and the urgency to address them.”

Taking ESMoA and LA’s South Bay City of El Segundo as ostensible “campaign headquarters,” FREESTATE features artworks that the artist conceives as fabricated historical ephemeras and objects, sovereign documents, and fictional propaganda. Split into three separate exhibition spaces the galleries allow the viewer to experience each as a separate moment along the path to the Free Republic.

The first room of FREESTATE is modeled as an elaborate canvasing office, replete with posters, buttons, lawn signs and other public activation ephemera. Sternberg has even drafted a new Constitution for California as part of the project, published in pocket form for easy mass dissemination, and which is constructed with language and intent to be fully functional if ratified. Room two is the brain of the concept. As California Dreamin plays on repeat, the walls of this room are filled with works on paper chronicling the artist’s mind map of nation-building. They explain the warmongering of the U.S., historical traumas in the European settling of California, the state’s environmental elegance and precarity, as well as the logistics of a peaceful and beneficial transition. The final room articulates the feelings of escape and freedom through Sternberg’s environmental sculpture and collage, which sit quietly against a traditional museum backdrop, demonstrating a future where one can breathe away from the toxic legacies the federal undemocratic influence of the U.S.

Cole Sternberg was born in Richmond, Virginia and lives and works in Los Angeles and practices in a range of formats including painting, installation, video, and writing. He obtained his Juris Doctorate with honors from American University, is a member of the California Bar, and has received numerous awards for his legal scholarship. As an artist, his work utilizes his legal and policy expertise to focus on a variety of social issues, from current human rights activism and its relationship to the law, to the environment, to the media and concepts of content overload. The works tend to be subtle or subversive in nature, driven by elegant visual concepts and poetry. He is interested in the intersection between humanity and humankind and how their lack of congruity hinders social progression and development. Sternberg has exhibited nationally and internationally, including exhibitions at the American University Museum (Washington, DC), Los Angeles Nomadic Division (LAND, Los Angeles), LAXART (Los Angeles), Primary (Miami), David B. Smith Gallery (Denver), MAMA (Los Angeles & Berlin), Praz Delavallade (Los Angeles) and There-There (Los Angeles). His works are held by major collections throughout the world, such as the Los Angeles County Museum of Art (LACMA), the Pérez Art Museum Miami (PAMM), the El Segundo Museum of Art (ESMoA), the American University Museum (AUM) and Deutsche Telekom.

ESMoA is an art laboratory located in El Segundo, California and it is run by artlab21 Foundation, a non-profit 501(c)(3). Founded in 2013, our mission is to spread the spark of creativity through the display and education of visual arts. ESMoA functions as a catalyst for creative thinking offering unique Experiences. The Experiences—our word for exhibition/exhibit—present a variety of media, including sculpture, painting, works on paper, performances, and photography. ESMoA’s activity is based on three fundamental pillars: Experiences, Arts Education Programs and Artist in Residence. ESMoA provides an array of programs and events, such as school programs, artist-led workshops, art talks, and family days. Admission and participation are free.