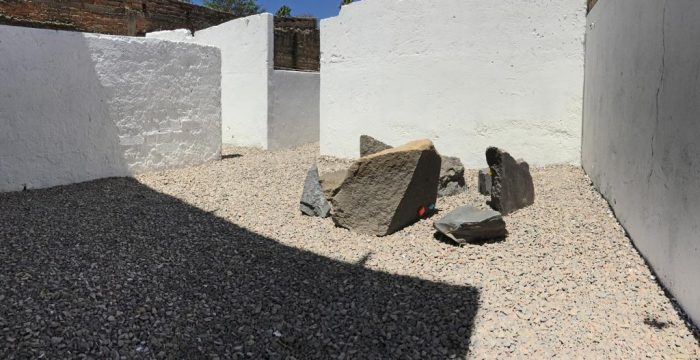 Central to the open-air show Crater Gardening are issues of climate change, pollution and preservation. A variety of materials were used, among them bamboo, stone, palm leaves and glass, with the protagonist role given to polymer clay, resin and polyurethane foam. The latter materials are emblematic of the Anthropocene era and represent a truly human group of materials since stone exists outside earth and bamboo predates humans for at least 15 million years. Could it be that the North Pacific garbage patch is the most authentic human legacy? Could it be that pollution is our grandest monument?

A human can take cover under a palm leaf shadow, but so can a sculpture. The works Gibbous Mimas Cafe Society and Phobos-Deimos-Ken Ken are in most part protection devices against sun radiation and in lesser part primitive/futuristic sculptures that explore ideas of growths, tumors and the boundaries between organic and inorganic. The work Pollution Monolith is essentially an enormous housing structure for a rather small sculpture at its center. Has human longing for shelter and security intensified the power of the exact elements it is trying to keep at bay? Can humans put order in spaces ravaged from extreme climate conditions? Will humans learn to live with ruins? Do humans already live in post-apocalyptic times?

At dusk, after the sun’s rays are no longer harmful, the works are lit by self-contained fluorescent tubes, so as to function as hubs or shelters that bring people together in order to ponder the aforementioned unsettling questions.