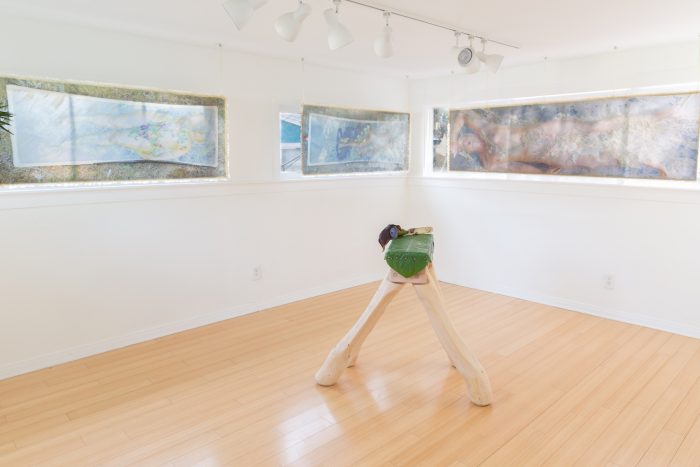 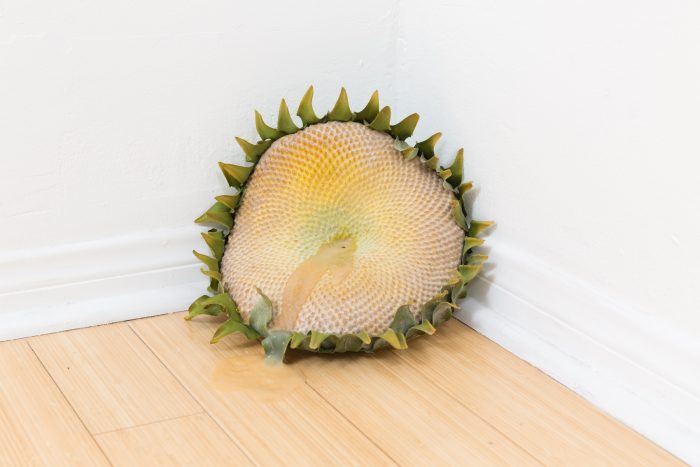 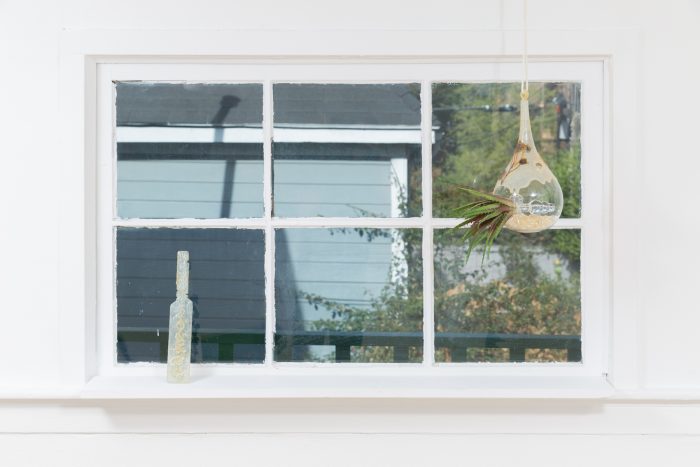 Garden presents Circlusion, Genevieve Belleveau’s first solo exhibition. Coined by writer Bini Adamczak, circlusion is a proposed antonym of the term penetration. Circlusion poses a speculative shift in the framing of sexual power and politics, assuming agency around the acts of enclosing, encircling, engulfing, and surrounding. Featuring works spanning a variety of media including photography, installation, sculpture, video and performance, Belleveau and her collaborators expand upon her eco-fetishist BDSM practice—in this teeming, verdant world the dominant and submissive inhabit a variety of roles: gardener and plant, flower and florist, mycelium and tree. By exaggerating and aestheticizing the subject of Nature, Circlusion not only speculates new tools for giving and receiving pleasure but also imagines new methods for propagating intimacy and redistributing power between and beyond humans.

Circlusion begins with Belleveau’s practice of vacuum bed flower pressings, in which Belleveau creates large floral arrangements over a live model who is then vacuum sealed in a life size latex envelope. A tool often used in BDSM play, the vacuum bed is a bondage, breath play and sensation device that encloses the model and almost completely restricts any movement, executed with a rigorous set of consent and safety protocols. By combining the vacuum bed with flower arranging, Belleveau transforms this act into a spa-like ritualistic process. Within this comforting, womb-like environment, hierarchies are flattened; the model sinks into the headspace of a pressed flower, just one of many plants in the bed. In this way, the sessions press the models into the two-dimensional, becoming objects-as-images. By performing the conventions of this practice non-traditionally, Belleveau transforms the role of the malevolent master into artful and caring nurturer. Belleveau will perform a live vacuum bed pressing for the first time publicly during the opening of Circlusion.

Inside the exhibition hang three large images documenting previous vacuum bed pressed floral arrangements. Captured straight-on by an overhead drone, the photographs are printed on transparency and painted with liquid latex, mimicking the materials of the bed itself. Activated by natural light, these site-specific works glow—stained glass in front of the gallery’s window-filled walls. Due to the delicate and degradable nature of latex, each week the gallerists must carefully lubricate each piece with liquid silicone to keep the material supple and extend its lifespan. On a nearby screen, drone footage zooms in on a vacbed-pressed model and zooms out to the surrounding neighborhood, gesturing to the essential horizontality and interconnectedness of all things, living and nonliving.

Echoing the visual language of the vacuum bed, Circlusion tools planted around the exhibition posit a world of objects that operate with the perceived agency of a phallus or flogger while possessing the encompassing qualities of an anus, mouth, or vaginal canal. These tools are not penetrated, but instead enfold, envelop, enact, and surround. Inspired in form by carnivorous plants, the Circlusion tools point to a future where that which engulfs is no longer thought of as passive or that which enacts as violent—instead, nature and the natural is understood to be all-encompassing, gender-neutral, and borderless. Other tools include a carved acrylic paddle, which bears the alien markings of a potential burrowing beetle; a glass anal “seed,” which sits suspended in its own latex-laden quiet cave; and a reproduction sunflower head spewing liquid latex, reminding that the thick, milky substance is a product of ten percent of all flowering plants.

The final work of Circlusion was made in partnership between Belleveau and her collaborator, partner, and Daddy Dom Themba Alleyne. Sacred Sadism Impact Pony emerges from the distinct aesthetic realm of Sacred Sadism, Belleveau and Alleyne’s conceptual eco-fetishist BDSM sex toy line. Using discarded wood from the roadside in Elysian Park, Alleyne hand-carved this sinuous piece of sex furniture in concert with the flesh of the tree—rendering it and respecting its life through his purposeful repurposing. Earthly and equine, the Pony anchors the environs imagined in Circlusion. For Belleveau, partnership is the base from which new futures may be realized.

In creating her debut solo exhibition, Genevieve Belleveau rejects the figure of the solitary genius artist. Produced in an ecosystem of friends and collaborators, Circlusion represents a new paradigm of partnership, stewardship, and care. The exhibition’s central ontological shift—from passive reception to active engulfment—plants a seed that complicates and reevaluates perceived power dynamics. Through recreating, exaggerating, and inverting traditional Western relations to Nature, Belleveau reframes the exchange of energy that is life.