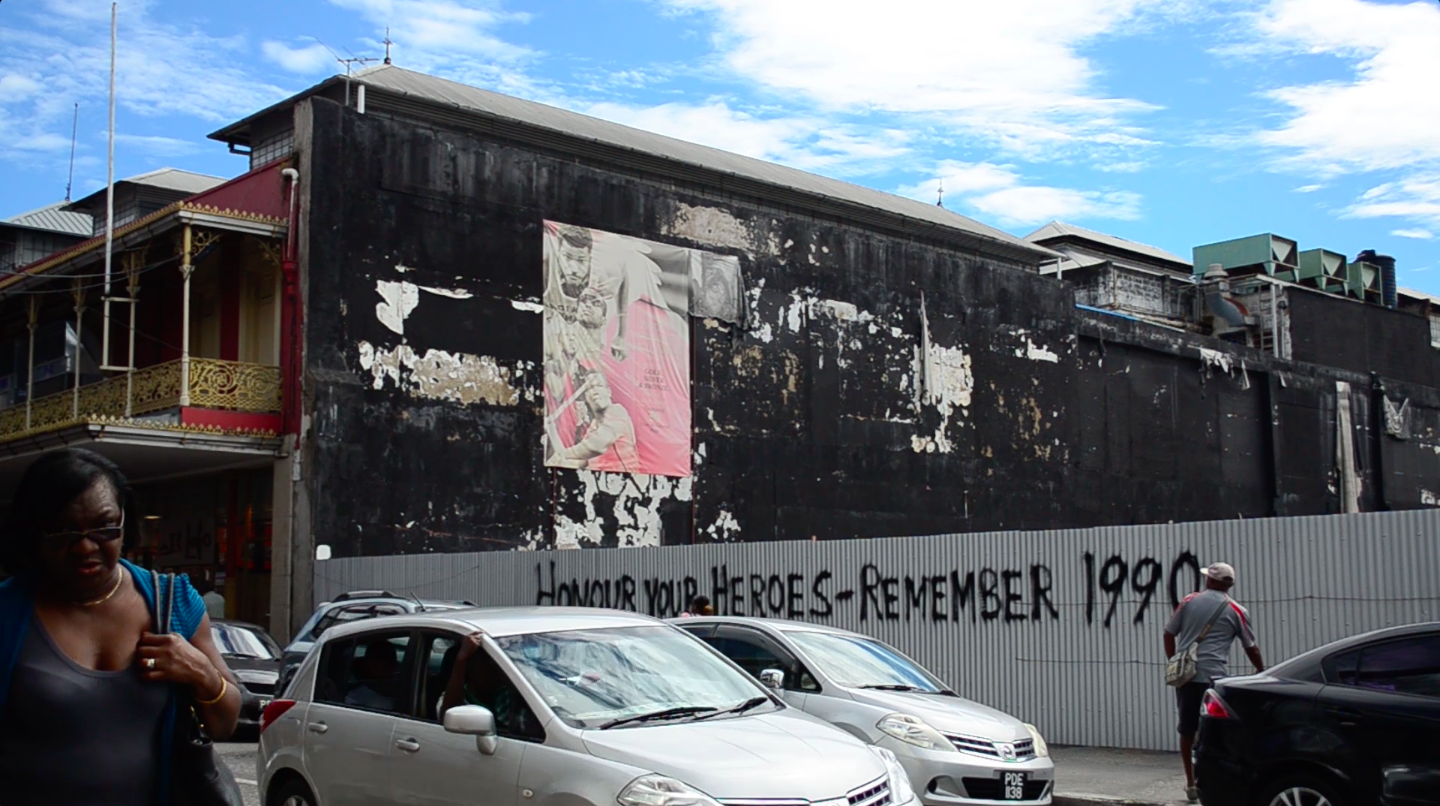 The Antilles for the Antilleans. This is how Puerto Rican nationalist Ramon Emeterio Betances calls for the independence of the Caribbean and the foundation of an Antillean Confederacy. Artist Monica Rodriguez describes her project Las Antillas para los Antillanos as a consideration of that call.

The project is an ongoing research collection that when exhibited takes the shape of a temporary “Caribbean research center.” The collection includes a vast variety of objects, books, essays, drawings, and documents. It involves fifty-one collaborating artists (to date) living across the different islands in the Caribbean, including Beatriz Santiago Muñoz (Puerto Rico), Andy Roberts (Haiti and US) and Kelman Duran (Dominican Republic and Los Angeles). Connecting its remote participants, a digital version of the research project is consolidated in a Dropbox folder, to be elaborated and edited by its collaborators. Inspirations for the project include classical texts such as Roberto Fernández Retamar’s Caliban essay, Eduard Glissant’s concepts of “creolization” and “antillanité,” and poems by Nicolas Guillen, among many other resources in English and Spanish. Among these texts also appears The Artist In The Caribbean, an open letter by CLR James originally delivered in 1959 at the University College of the West Indies Mona, in which James poses the following question:

“Is there any medium so native to the Caribbean, so rooted in the tight association which I have made between national surroundings, historical development, and artistic tradition, is there any such medium in the Caribbean from which the artist can draw that strength which makes him [sic] a supreme practitioner?” In a call to the importance of the nationalist artist, defined as a practitioner of a wide range of mediums, including literature, painting, architecture, etc., James compellingly states in his letter: “the universal artist is universal because he is above all national.”

It is not uncommon among contemporary artists to incorporate extensive research, archiving and cataloging as part of their practice. Artists’ research, an often uncompensated and unacknowledged labor, may exist as independently from the artwork, as a contextualizing backdrop or as a complementary element to the “final project.” For Monica Rodriguez, the research is the process of the production. The work is the material revisited, collected and (re)created that fills the space of a gallery and turns it into a library or research center. More than displacing objects and items from the colonial archives—a curatorial process that borrows on loan—the artist is interested in the “building of an archive” that often takes a collaborative form.

Following her trajectory on archival transformation, in the Los Angeles iteration of Monica Rodriguez’s Las Antillas para los Antillanos, as part of Open Air Prisons (September–November 2016), the project room at Los Angeles Contemporary Exhibitions was transformed into a “Caribbean research center.” Books, publications, documents, and drawings were organized next to images of food, flags and listening stations. The mats and pillows on the floor, as well as the desks and chairs, implied the center as a space for study and contemplation, a space between a personal library and an artist’s studio.

In Rodriguez’s words, “The project uses Puerto Rican nationalist Ramon Emeterio Betances’ call—Antilles for the Antilleans—as starting point to build connections between cultural producers among the Caribbean, a region where political and economic paradigms have prevented the development of a creative and fair flux between islands. This has historically been due to language barriers, cultural and ethnic differences, and because of the economic and political structures implements by colonial powers. It is, therefore, the archive’s core intention, to prompt a much-needed dialogue about what it means to be Caribbean through an articulation of collective social exchange. In other words, only through collectivity can we (The Antilleans) work together towards a consideration of decolonization strategies through a creative supportive network.” 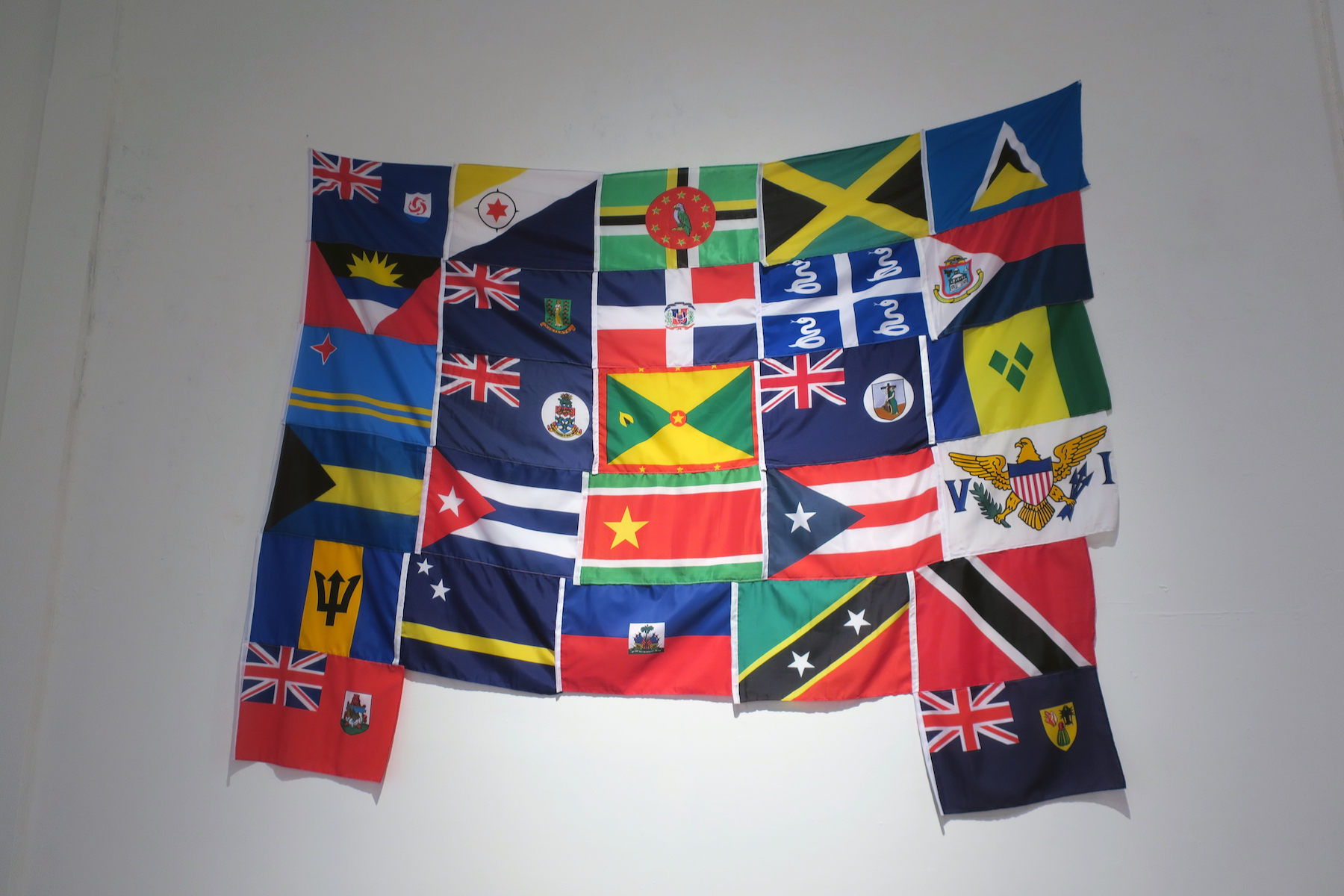 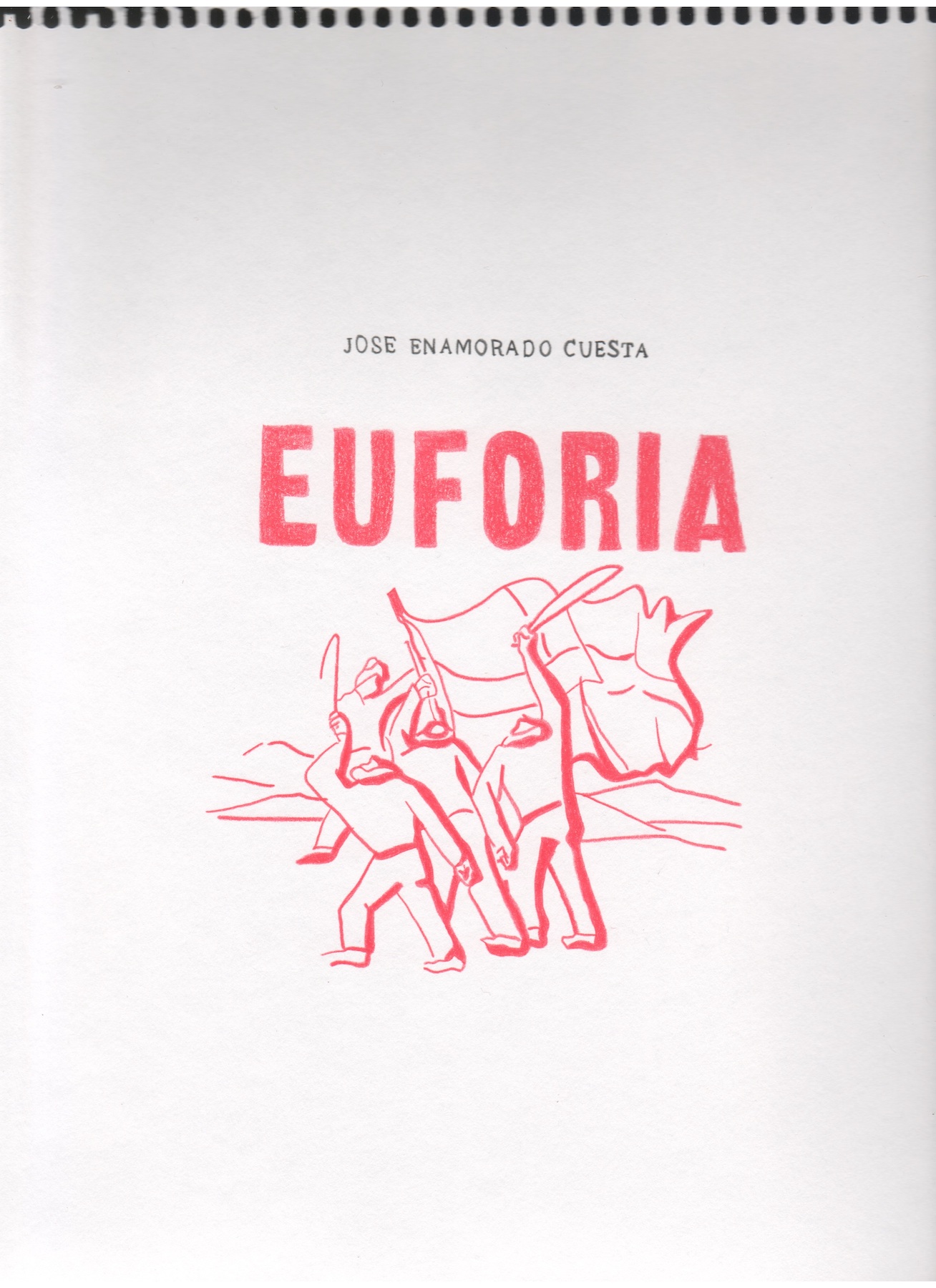 The online collaborations include the use of “exquisite corpse” as a way to network artists across the Caribbean islands. Rodriguez’s project investigates the history of Puerto Rico’s colonization as beginning with the question of the Caribbean writ large. By examining the interconnections of Caribbean colonization, the project digs into the deep and complex histories of political struggle, complicating language and ethnic similarities. Rather, she emphasizes that the islands in the Caribbean have been separated because of such differences—and not by their political distances. Hence it is part of her project’s ambitions to imagine the relationships and connections among them through a creative, critical and explicitly political archive building process. At the core of Rodriguez’s practice is the political question of methodology: how is Caribbean identity investigated through creative practice, and how are the results of such investigations displayed.

Their display often takes the form of transference. Another work, Botin Ocupado (libros) (2014) features twelve wooden frames that contain Rodriguez’s drawings of confiscated books, taken by the U.S. Department of Justice during or after the Puerto Rican Nationalist Revolt of 1950. The drawings of book covers depict the reading selections of anti-colonial protestors and their allies as well as the range of threats perceived and felt by the colonial forces. In a drawing on the left-hand side, Arte de la Guerra is drawn in black capital letters. Next is Edward Hallett Carr’s La Revolucion Ruse de Lenin a Stalin 1917–1929 in a soft brown marron. The drawings set up the scope of contractions in confiscation. Blatantly political titles, such as La Lucha Por La Independencia de Puerto Rico by Juan Antonio Corretjer and El Fascismo by Juan Carreras appear in the same red and black palette. They are intermixed with Women in Kentucky Industries 1937 and the cookbook Scholar et Francois Recettes de Cuisine Practique, the letters drawn out in lapis blue with a pale pink depiction of a roasting pig. Through Botin Ocupado (libros) (2014) we learn that Popular Science and Reader’s Digest were included in the confiscated materials. How are we to make sense of the threat that cookbooks, industrial histories, and contemporary science posed to colonial governments—in addition to the texts that could have only called for, not carried out, direct attack? Perhaps more importantly, the range of the drawings unfold the complex knowledge systems—life—of those associated with the Puerto Rican Nationalist Revolt of 1950.

Rodriguez’s work sets up imaginative landscapes by re-situating artifacts from colonial archives through an auxiliary. Her drawings, sculptures, and databases work to divulge the detailed accounts incorporated into colonial archives yet still missing from our own understanding (what and how much was taken from the resisters and why, and what explanations do they offer today?). They show us the possibilities offered when the archive is rendered to narrate those it has taken from. In Botin Ocupado (libros) (2014) we learn not only what the US colonial state feared, what it marked as a potential threat, but also about the life of those working towards liberation. They read everything, about how to fight, the histories of fighting, and Reader’s Digest. What could be harmful about practical cooking and contemporary news other than that, a better and thriving life for the anti-colonial, decolonial dreamer is in itself, the threat? Such are some of the questions leaping out of the drawings in Botin Ocupado (libros) (2014).

The project allows us to imagine a museum of confiscated items and gives flight to their potential variations: a museum of confiscated items across colonial regimes across the continents. While absurd and comical in its banality, it is also a profound entrance into the lives and communities of resisters. There is potential in understanding what power imagines will unravel its hold. We feel it through her beautiful, innocuous, DIY transformations of objects that induced so much fear in an all-powerful colonial government. In addition to the books in Botin Ocupado (libros) (2014), a series of molotov cocktails sits next to a box of matches, flags, and shovels. The presence of these items next to each other infers the potential for a fire. It has all the necessary elements but has yet to be ignited. What comes through is a rage that is well alive.

When we asked Rodriguez about the process of selecting archives, and her method of researching, she recounts that formal methods cannot easily be applied to government records of resistance. When she was in New York City interested in making work about the Puerto Rican Nationalist Revolt of 1950 she looked at the archives at Hunter College. She tells us that the records that became translated as drawings in Botin Ocupado (libros) (2014) were in boxes about Puerto Rican history but did not necessarily announce themselves as documents about the Revolt.

Rodriguez’s bodies of work re-imagine classification systems and forms of knowledge for the historical to present day protester and new and old possibilities of political Caribbean affinities and accentuate the lived politics of the Master Archives. Her work is also an archive for new dreams: a world not yet entered but being imagined. 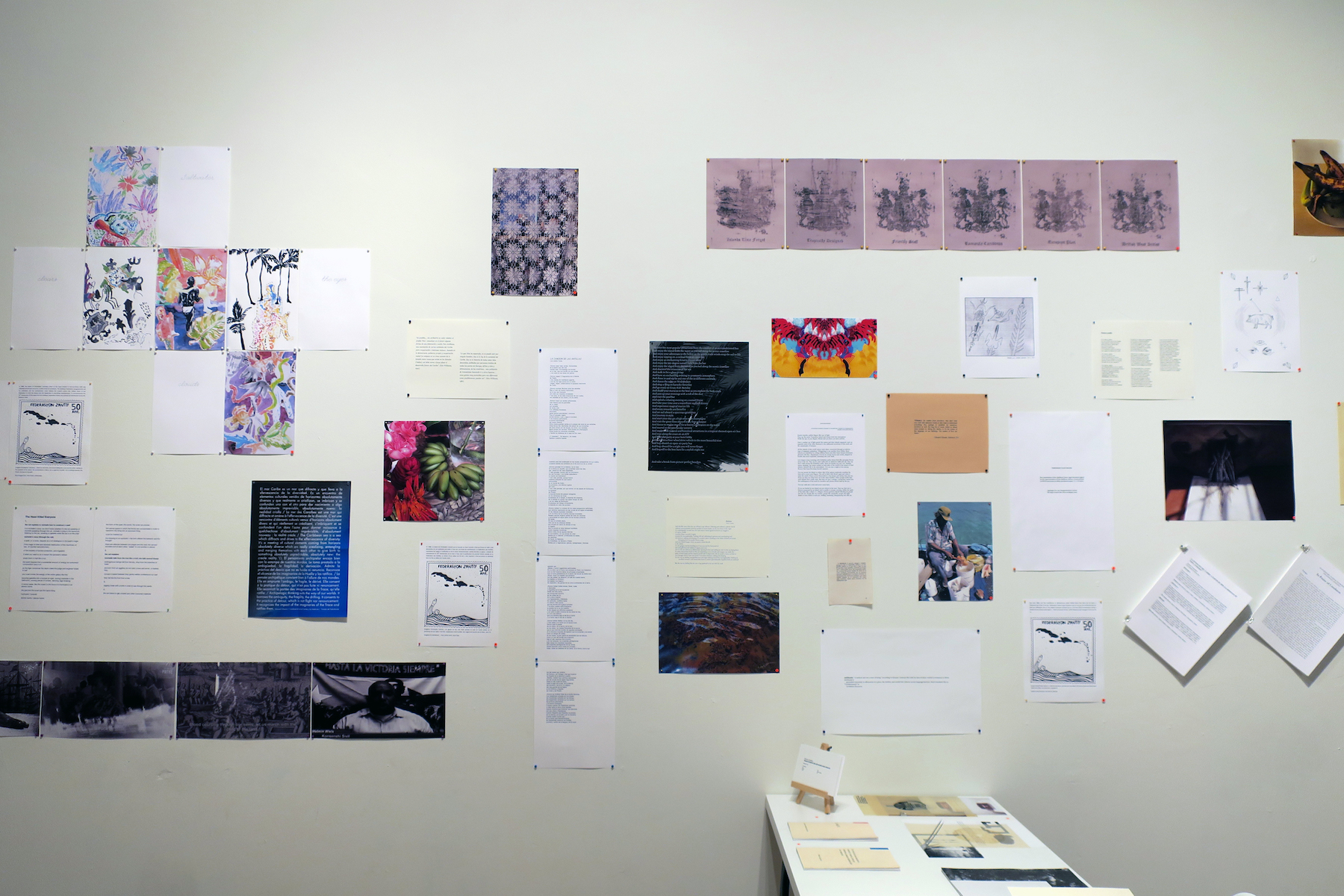