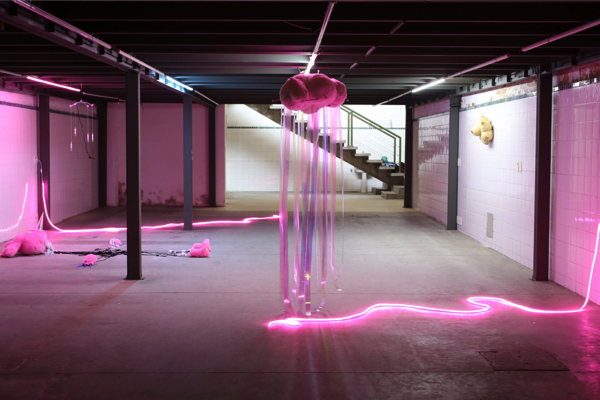 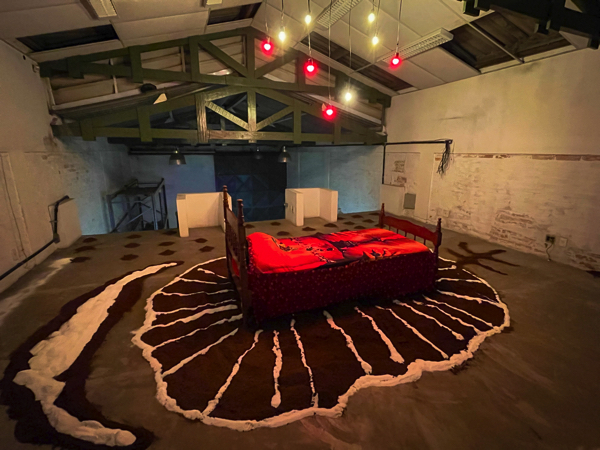 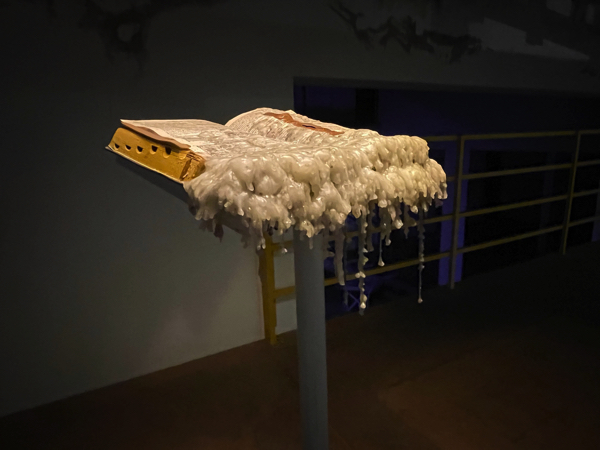 “Travesti Spirituality is a catastrophe, a destruction. It’s what makes a tower fall, the cards of this collapse, the dusk emerging from the dust of debris and yet it will never be debris. We are not the rest of what was broken, but what has caused the break.”

Soon, they will fall. Those who want to rule our bodies and imprison our imaginations, they will fall. Propelled inescapably into the abyss by their own destruction, it has never been so clear that this fall is just a matter of time. But how long can decay last? This exhibition is a site of rehearsal and speculation, gathering six new works that, by conjuring up worlds to come, accelerate the inevitable ruin of today’s structures.

Despite all featured artists recognizing themselves as travestis², the exhibition does not aspire to represent an identity or introduce a comprehensive translation of experiences. Instead, it emerges from the urgency to cultivate space for multiple and shifting existences to experiment and inhabit art strategically: sensing the cracks, holes, and routes within artistic production and reception. In this moment of transition, the artists articulate healthy possibilities of collectively inhabiting the unknown and unpredictable grounds of the future.

Unexpected openings arise from chance encounters which prompt a shifting in perception and a questioning of assumptions. Still, retaining evidence of those encounters is a struggle in a city obsessed with the new, immersed in the endless cacophony of demolition. To rescue what has been silenced, Ana Raylander Mártis dos Anjos’ project, so far, so close displays a set of three doors removed from the restroom of a downtown São Paulo bar. Symbols of a space rife with both harassment and intimacy, they intend to divide the public and the private, yet are saturated with signs that refute exactly what they stand for.

In her ongoing research, the artist explores the overlapping, non-linear layers of time scrawled in the anonymous messages that surface and fade away on these frontiers. Though the gentrification of this neighborhood brings with it familiar mechanisms of erasure, Mártis dos Anjos’ work reaffirms the resiliency of those crossings and their unavoidable traces—residues that appear familiar yet distant, absent and abundant, meaningful and incomprehensible.

Visibility is not a simple matter. Being looked at does not imply being seen, recognized, or accepted. In the deadliest country for trans people, where the average life expectancy is 35, a refusal to conform to gender norms means existing between invisibility and hypervisibility, where one is both silenced and surveilled. The same goes for anyone who is Black, Indigenous, or living in poverty. Their visibility often amounts to brutal images of oppression, functioning as an instrument of fear and further isolation. TRANSÄLIEN’s optical installation TRANSVISION departs from the power of belonging to contrast the national collapse with the prosperity of travestis.

Comprising a 3D canvas that shifts according to which of the two accompanying masks the viewer wears, TRANSVISION demonstrates that perception depends on the position from which one stands; better yet, it depends on the eyes one possesses. The function of the mask is not to hide its wearer. Instead, it’s an instrument of revelation that challenges the viewer’s impulse to categorize. Requiring the viewers to don a mask is also a reflection of the artist’s own existence: TRANSÄLIEN wears them regularly in an effort to liberate the popular imaginary from cisgender normativity, unveiling new aesthetic possibilities rooted in the comprehension that life is a process of continual transformation.

It’s a proposition that questions what might surface if our imaginations and bodies were freed from the unreachable and utterly tedious standards of appearance, behavior, and desire instilled in us since childhood. In their deviation from gendered expectations, trans bodies are often referred to as unnatural, or monstrous. In Anamnesis: Dream Distortions, Lucyfer Eclipsa investigates dreams and nightmares present in her childhood memories. Mixing soft and sharp materials, the artist explores the meanings of monstrosity by reexamining her own history. Converting traumas and wounds into prosthesis and extensions, she generates ambiguous creatures of a bio-political fantasy in which mutability and regeneration are to be celebrated. Though these ludic figures appear to be in a permanent state of metamorphosis, Eclipsa evokes the beauty of existing outside defined realms.

The narcissistic ideals that construct difference as pathology underpin a system that demonizes and yet exploits and consumes the “other.” In Bruna Kury’s work, the resistance against transphobic, racist and patriarchal violence is rooted in a commitment to her own vulnerability. Scorpionics features fabrications such as dildo-knives—objects that are simultaneously an ode to pleasure and a weapon for counterattack—a self-defense mechanism that deflects the castrating gaze and the objectification of dissident bodies.

The installation is accompanied by archival videos of performances in which Kury delves into the tensions between pleasure and power and their bodily implications, prompting reflections on gender-based violence, property, and care. Drawing on postporn³ practices complicated by her Latin-American transfeminist position, Kury reverses the passivity assigned to the feminine⁴ and confronts the desire to control disobedient bodies that fuels current genocidal politics, such as the dismantlement of public health systems, mass incarceration, incitement to hatred, and police violence.

Castiel Vitorino Brasileiro, whose work also builds on care and life-affirming practices, maps the body in order to comprehend its sources of power. Grounded in this knowledge, the artist seeks to nurture reserves of creativity, sensuality, and courage exhausted by colonial violence so that Black and trans people can experience freedom and healing. Who are you to lay on my bed is a performative installation in which earth, crystals, and herbs are arrayed around a mattress, imprinted with a picture of the artist in a ritual of cleansing and balancing of the first (root) chakra, the focal point that grounds the body.

Who are you to lay on my bed is a fragment of a song sung to pombas giras: strong, astute and sensual feminine spiritual entities who lived defiant lives. Working through macumbaria⁵, the artist penetrates into the invisible to understand how to fertilize the territories of existence. Exploring deep sources of energy, ephemeral places of chaos and clarity, fear and courage, the artist mobilizes ancestral wisdom to process the poisons of a sickened society.

As cultural theorist Gloria Anzaldúa notes, humans are taught to fear the supernatural: both the undivine, animal impulses such as sexuality and the unconscious, and the divine, the god in us⁶. In Intercession, Vulcanica Pokaropa draws on her decade-long experience as a Christian to assemble an altar of sanctified travestis, not only acknowledging their inherent dignity, but affirming that theirs is a sacred community.

Mixing elements from Catholicism and symbols associated with the universe of travestis—such as razor blades, high heels and syringes—the altar unifies the profane and the divine into one single entity. By doing so, Pokaropa sacralizes historically-erased ancestors whose legacy forms the possibilities of the present and deposits faith on the future of dissident existences. Connecting temporalities, the artist recognizes how devotion forges promise, but inverts the racist principle that designates white men as the savior. According to Pokaropa, a future in Brazil disconnected from Christianity is unlikely, but if Jesus would come back today, it would be as a Black travesti.

The six installations build meanings intersected by the poetics of interdependence, appropriation and metamorphosis, intertwined by a collective struggle that shifts the structures, relations, and affects of power. It’s an open question whether this city—its fences and gates, empty buildings and ever-growing homeless population—can ever shape-shift into a place that, instead of obstructing, facilitates alliances such as those, especially when alliances necessitate the sharing of risks, resources, and a common ground.

While violence is a force of enclosure and constraint, resistance is an unfolding energy of openness, movement, and creation. Change is inevitable. By recognizing the potency gathered in this exhibition, we understand not only the proximity of the fall, but also how it announces the arrival of another time: one that does not proceed ahead, in the linear fashion of unceasing progress, but a future that shifts under, above, around, inside and before this one, a future that will certainly be the time of travestis.

—Text and curatorship by Clarissa Aidar