From their experience as cultural workers, the artists José Luis Arroyo Robles and marco lópez valenzuela share some questions about the professionalization of the arts in Michoacán. 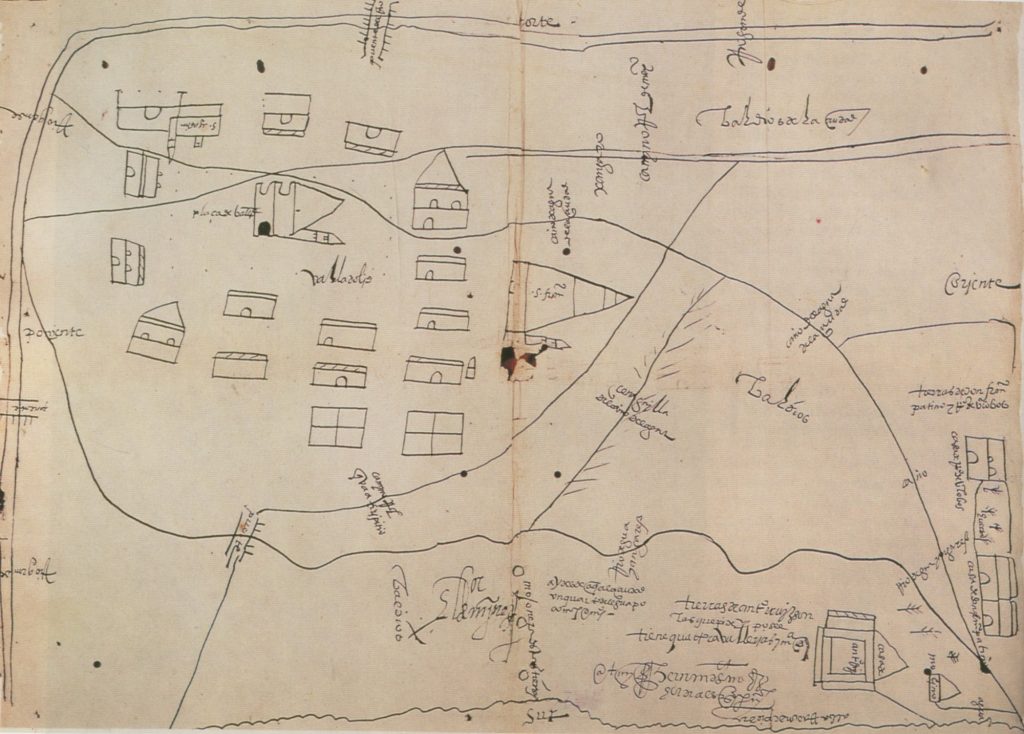 Before beginning, it’s important to mention that we consider it fairly complex to congregate all the voices and fields of action in the cultural sector in Michoacán. Therefore, this opinion corresponds to the knowledge we obtained as participants in this guild. Likewise, we depart from questions, because we believe them to be detonators of different experiences rather than ways to establish absolute answers.

To mention a few events, Michoacán is crossed by an international film festival that this year celebrates its 19th edition, an international music festival with 33 editions, and an organ music festival with 55 so far. In addition, for many years, this city hosted the Encuentro Iberoamericano de Poetas del Mundo Latino as well as various state and national dance and theater shows. It also hosted the XIV FEMSA Biennial between 2019 and 2021. This is the context from which we question ourselves.

How are we taught what we should learn?

In Michoacán, the educational offer of a cultural nature is reduced to three degrees linked to artistic professionalization: one focused on production and study of artisan heritage and two on the study of art history. With the exception of the Universidad Intercultural Indígena de Michoacán (UIIM), the rest of the educational spaces are concentrated in the state’s capital, a situation that works as a first filter of those who can afford to reside in the city of Morelia.

The first problem that we found with these programs—and perhaps the most urgent to resolve—is that their study plans are largely translated into Eurocentric approaches, to the study of the “great” theories of art, leaving out the study of production and research that happens within the state, for example. We have artistic academies that teach their students the Fine Arts techniques, which do not consider the regional artisan practices worthy of being taught, relegating them to a folkloric example; perhaps the lack of practical studies on textiles is the example that best illustrates this absence. 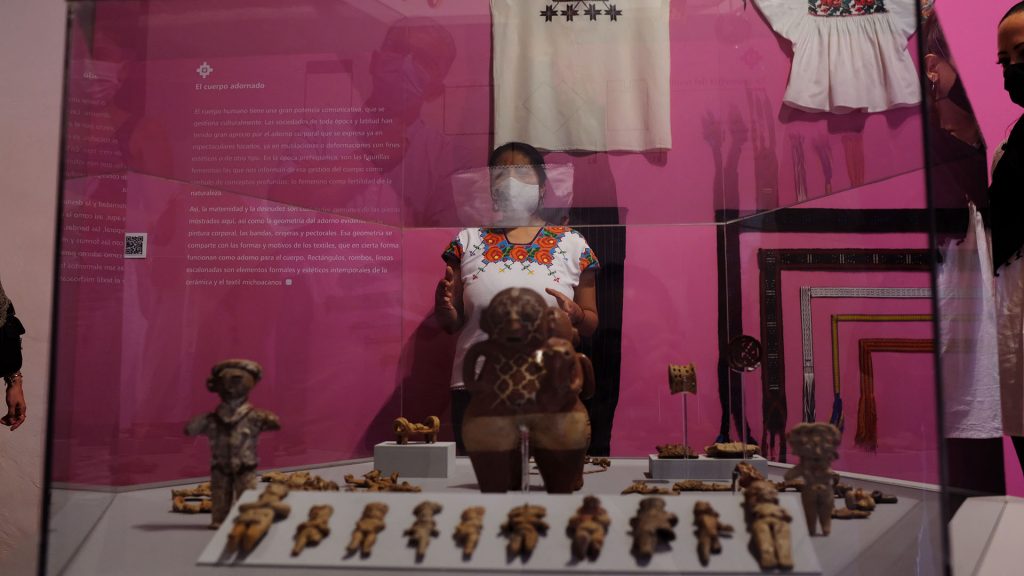 How much of what we show accounts for what we do?

Many of the exhibitions presented in Michoacán—or rather, in Morelia, where most of the cultural venues are concentrated—are meant to show everything. It’s important to note that the figure of the curator is barely visible in the cultural sector of the state. Thus, the artist is the one who selects and generally decides what of his, her, or their recent production is relevant; generally oversaturating the room and leaving the viewers to see everything and nothing.

That is to say, hoarding is the main practice in Michoacán: cramming the walls, floors, and ceilings of the exhibition spaces with content. Due to this, we must ask ourselves, what can we do to change this? How can we learn to work with curators to make our exhibitions better? How to recognize profiles capable of making curatorial decisions and where are these professional profiles in the organization?

In contrast to the above, it is worth mentioning the exhibitions currently on display at the Museo del Estado de Michoacán, Resistencia and Cóncavo/Convexo [Resistance and Concave/Convex], which recognized the importance of interdisciplinary work to build two curatorial projects that have successfully reviewed the validity of the artisan heritage.

How much is left of what goes away?

For many years, as mentioned above, Michoacán has hosted important regional, national and international events. The International Film Festival, the former International Music Festival, and the International Organ Festival, all in Morelia, are examples of this. The most recent, perhaps, is the XIV FEMSA Biennial Inestimable Azar, which, although–due to its nomadic nature–is not a recurring event, it was of international relevance in spite of the pandemic we are still going through.

So, what do these types of events leave behind? FICM, for example, has translated its offer–outside the festival dates–to workshops and itinerant screenings; the Music Festival, to talks and masterclasses that students from the UMSNH and the Conservatorio de las Rosas take advantage of, although outside its dates it barely offers fundraising events for its future editions; while the Organ Festival limits its offer to master classes given during the festival. The Biennial, in addition to the exhibitions, carried out a pedagogical program that reviewed curatorial, editorial, and mediation issues aimed at the local public, as well as talks and workshops imparted by local and international artists and managers.

Therefore, we wonder how much the contents of these events affect the training and professionalization of agents in the disciplines they cover. Perhaps more time will have to pass before this can be recognized, or perhaps –in some cases–it’s already too late.

And what do we do?

Historically, it would seem that the notion of “center” is intrinsically related to that of “city”, and in particular to the idea of “capital”. Thus, Morelia not only concentrates the three powers of the State, but also the titles of World Heritage Site, Viceroyalty Jewel of America, and City of Festivals, obsolete–in our opinion–in current times where the aim is to decentralize and decolonize the cultural offer.

On this issue, we only question the way in which our capital city is not aware of the territory it claims to represent. 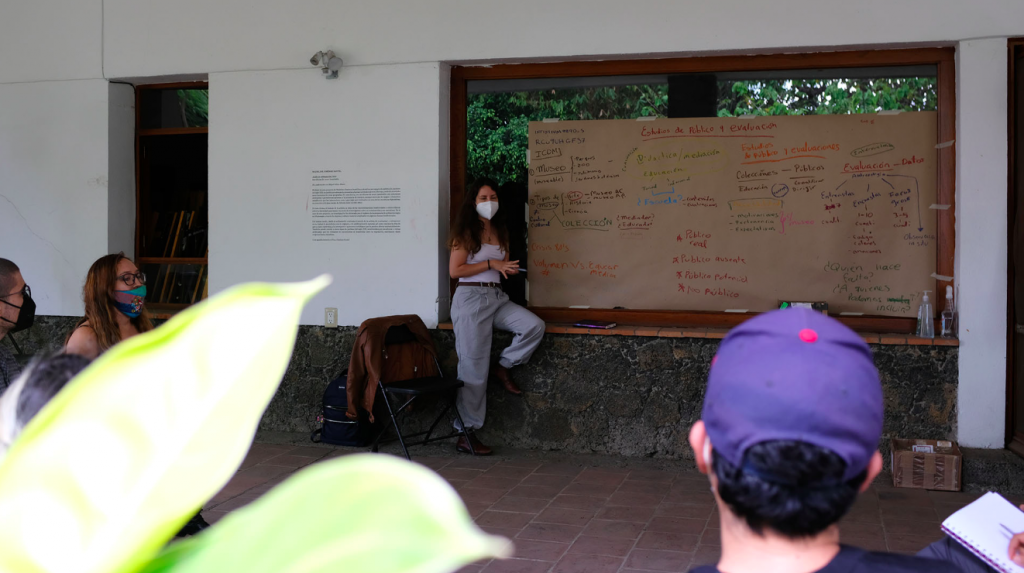 But enough about ourselves, what about the kids?

El ombligo llama [The navel calls], they say. A phrase that comes from the–not so–ancient tradition of giving birth at home and burying the umbilical cord in the place where the newborn baby was received. And yet, it is less and less practiced nowadays: when many leave and do not come back due to the lack of respectable conditions–which do exist in other places–to practice and give free rein to one’s own ideas.

We grow up thinking that success is to live in the biggest house, to be the one who earns the most. That to make it is to leave where you grew up. And so, we care little about making our communities grow. In that sense, Michoacán has always been an example. Since the 1960s it has exported labor to the United States, and the remittances that workers send back to their towns, rather than strengthening them, destroyed their identity. And in art, the case has not been very different.

Some–rightly so–leave never to come back, but there are those who choose to stay and cultivate scenarios whose fruit, perhaps, can be harvested by someone else.

What do you call that which you don’t have?

The artisans build their own tools, recognizing that they are the ones who know what they need to facilitate the production of their pieces. If we learn from this, we can begin to find ways to use what we have at hand to address the shortcomings we identify. But to do so, we must first point them out. 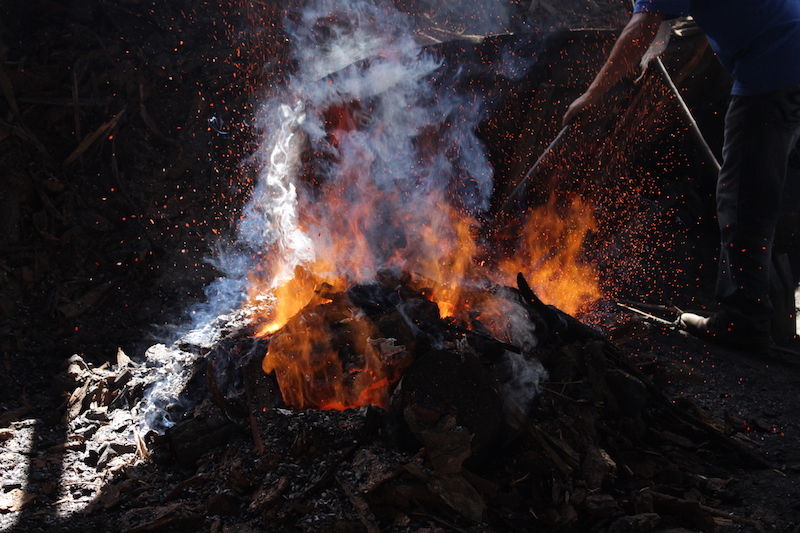 We identify individualism. The stagnant form of guild work. Envy. Personal and group revenge. Protagonism disguised as a collectivity. The dismissal of threatening talent. The undermining of the “popular arts”. The institutionalization of vocation. The lack of recognition of the spaces will thrive and continue with their missions.

And at the end: how to breakthrough in this bad-land?

Why change by changing? Or is it that what doesn’t move doesn’t get better?

Change, as the unknown, terrifies. Change seems to be a modification of everything when it only implies taking care of oneself. Change, then, is to be open to growth, to recognize differences, to build on similarities, and vice versa. And it’s true that in practice it is not easy, although possible.

There is a certain current of thought that believes that our world is determined by what we enunciate. That is why we ask: how can we think about our world if we enunciate it with the tools that other cultures have inherited from us? More importantly, how can we begin to think about our own ways of enunciating the world? Maybe it’s time to focus, even if just for a second, on what’s happening here, never mind what’s happening so far away.