Terremoto La Postal is an exhibition program located in our office in the center of Mexico City that fosters the dissemination of archival research projects within the artistic field through public exhibits. Performando el espacio público by Colectivo A la Plaza was made possible by the generous support of Albertine de Galbert. 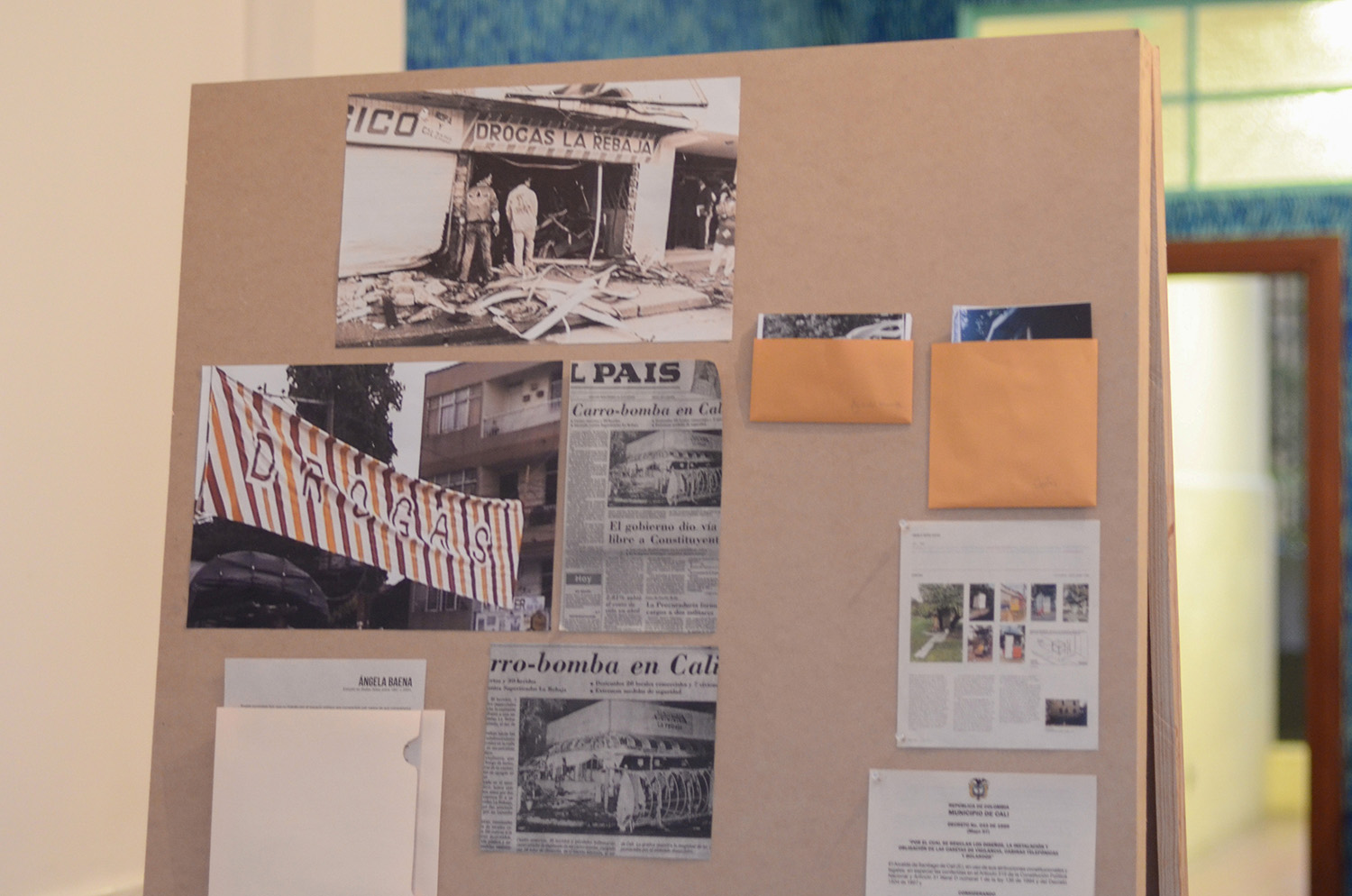 Arising from our first call for curatorial projects, Terremoto La Postal presents its second instalment Performando el espacio público [Performing the Public Space], a project by Colectivo A la Plaza from Cali, Colombia which brings together the archives of female artists—coming from different decades—whose practices have an emphasis on non-objective art in the public space. The artists focused on in this exhibition are María Evelia Marmolejo—who at the beginning of the 1980s started her work as a performer in public space—, as well as some of the works completed between 1995 and 2000 by Alejandra Gutiérrez, Claudia Patricia Sarria, Connie Gutiérrez, Paula Agudelo, Angela Baena, Marcia Salas and the collective Encuentro Anarko-Punk. Through oral accounts, video clips, photography, newspaper articles, texts, and remnants of graphic materials as approaches to recovering memory, these artists propose various forms of occupying the public space, responding also to their political and social context.

In 1981, a young woman that had been a student in the School of Visual Arts at the Instituto Departamental de Bellas Artes de Cali asked the Local Administration Centre (CAM) for permission to do an artistic act in the plaza that is less than two blocks away from the building protected by this institution. Anónimo #1 was the first performance that María Evelia Marmolejo did in a public space, denouncing the disappearances and violent murders which occurred in Colombia during the Security Statute implemented by the government of Turbay Ayala. Confronting the state, who agreed to the request without fully understanding what the request implicated, María Evelia questioned silently and through her body the status quo. 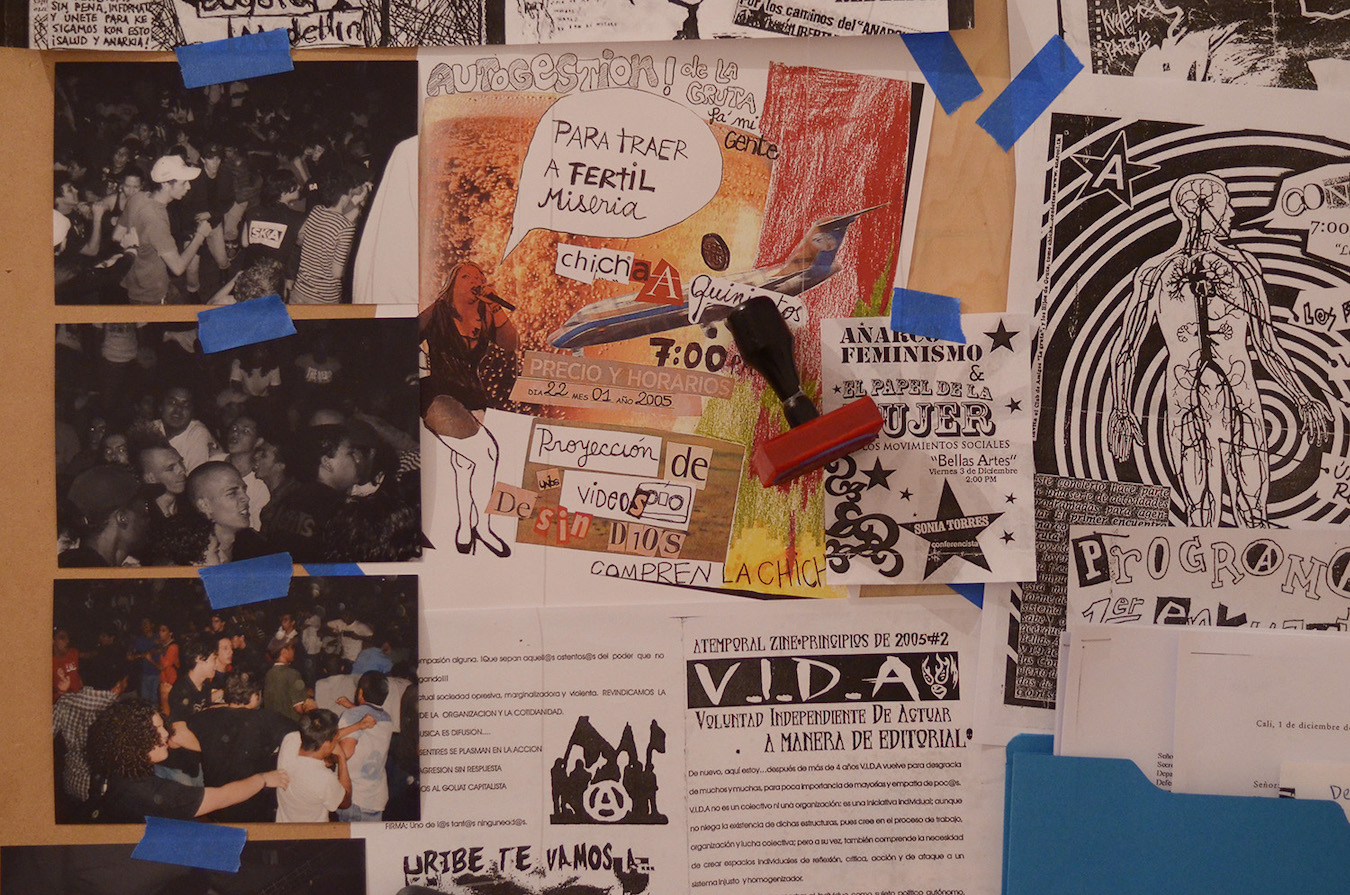 Thirteen years later, and during the decade of 1995 to 2005, other artists—at that time students—did the same by confronting the state institution and the art in itself: asking for permission or disguising themselves as institutional bodies, impersonating other identities, bursting into daily life, fostering encounters and disencounters with those who walk about the streets and bridges of the city; Alejandra Gutiérrez, Claudia Patricia Sarria, Connie Gutiérrez, Paula Agudelo, Angela Baena, Marcia Salas and the collective Encuentro Anarko-Punk challenging the public space through different approaches, learnings and unlearnings in the Instituto Departamental de Bellas Artes de Cali. 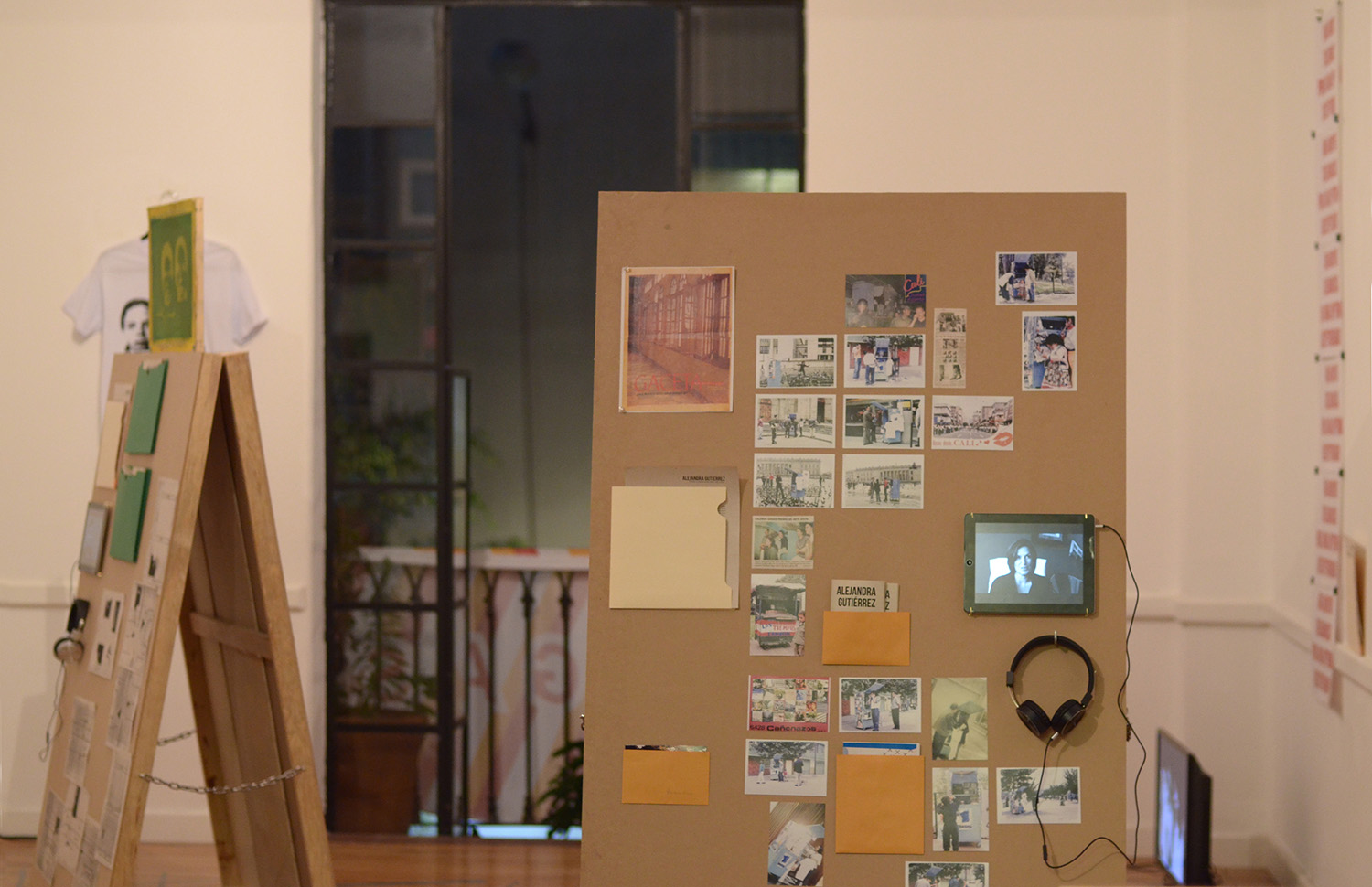 This curatorial project aims to spatialize the analysis of the compiled documents with the aim of identifying actors, spaces and forms of acting. Based on this it proposes a cartographic gathering which allows for the reflection on how the practices can generate dialogues with the city, especially with the surrounding areas and artistic institutions; whether promoting or not, the active role of the spectator through another type of symbolic links.

The exhibition of this archive signifies a physical movement in the space: the documents unfold, questioning and establishing dialogues between the corporal, political, spatial and temporal relations that come together in a map of Cali on the floor, in which areas are identified where the interventions of the artists took place, as well as the social and political events that are linked to them, and which appear in direct form as news bulletins, just like the news often circulates in the streets.

A research and action project about and in the public space, which seeks to question, through a non-objective art archive under construction, the corporal, political, distinguishing and temporal relations that converge there.

It began as a project in 2015 with the exhibition A la plaza, prácticas en el espacio público 1995-2005 (To the Square, Practices in the Public Space), a documentary exposition formed collectively among students, teachers and graduates from the Department of Visual & Applied Arts from the Instituto Departamental de Bellas Artes (IDEBA) in Cali, Colombia. It indicated a collective interest for the recuperation and spatialization of non-objective art archives. The systemization of the above-mentioned documents has made possible the construction of a diverse archive.

In 2016 they made the exposition Bajo la institución – la calle: performando el espacio público 1995 – 2005 (Under the Institution – the Road: Performing the Public Space 1995 – 2005), a curatorial project that was proposed with the aim of expanding the dialogue between two archives (their own and another of ExTeresa Arte Actual), two cities (Cali – Mexico) and two urban centers. It was shown in La sucursal.clo (2014 – 2016) and it was worthy of the scholarship of curatorial investigation by the Secretary for Culture in Cali (2016).

Connie Gutiérrez Arenas
Teacher and artist who is interested in the interaction of the theory and the practice of contemporary art and deals with the notion between two themes, borders and exile. Masters in Fine Arts from the Instituto Departamental de Bellas Artes, Cali, Colombia (2000) with a chosen field (2008) and Masters in Theory & Practice of Contemporary Art and New Medias, Universidad París 8, France (2014).

Mónica Restrepo
Artist that works around the concept of documents experimented with raw materials such as mud and immaterial mediums such as performance, video, text. Masters in Fine Arts from the Instituto Departamental de Bellas Artes, Cali, Colombia (2007), Postgraduate Program from the superior school of Bellas Artes in Lyon, France (2012), and in Homework Space Program in Beirut (2013).

Lorena Díez Arias
Artist and cultural manager, with interest in the processes that act in the public space, the relations with communities, the recuperation of collective memory and environmental tensions. Masters in Fine Arts from the Instituto Departamental de Bellas Artes, Cali, Colombia (2006) with Masters in Museology and Management of Cultural Heritage, Universidad Nacional de Colombia, Bogotá D.C., Colombia (2013).

Alberto Campuzano
Artist whose practice establishes itself from co-relative micro politics to the daily use of the aesthetical experiences of the individuals and their narratives in the use of the public space. Masters in Fine Arts from the Instituto Departamental de Bellas Artes, Cali, Colombia (1997), Master’s degree in Fine Arts from the Universidad Autónoma de México (2005).