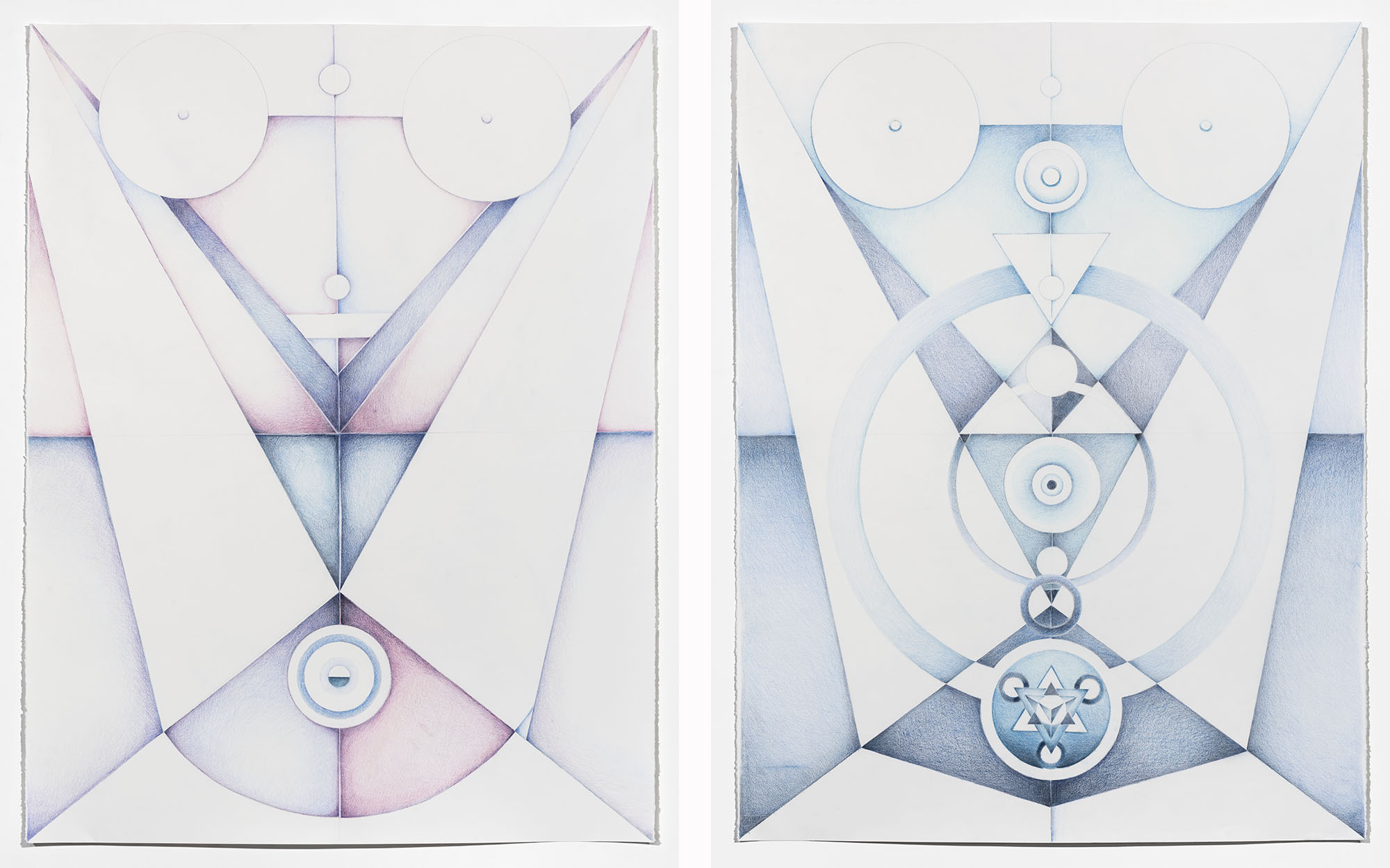 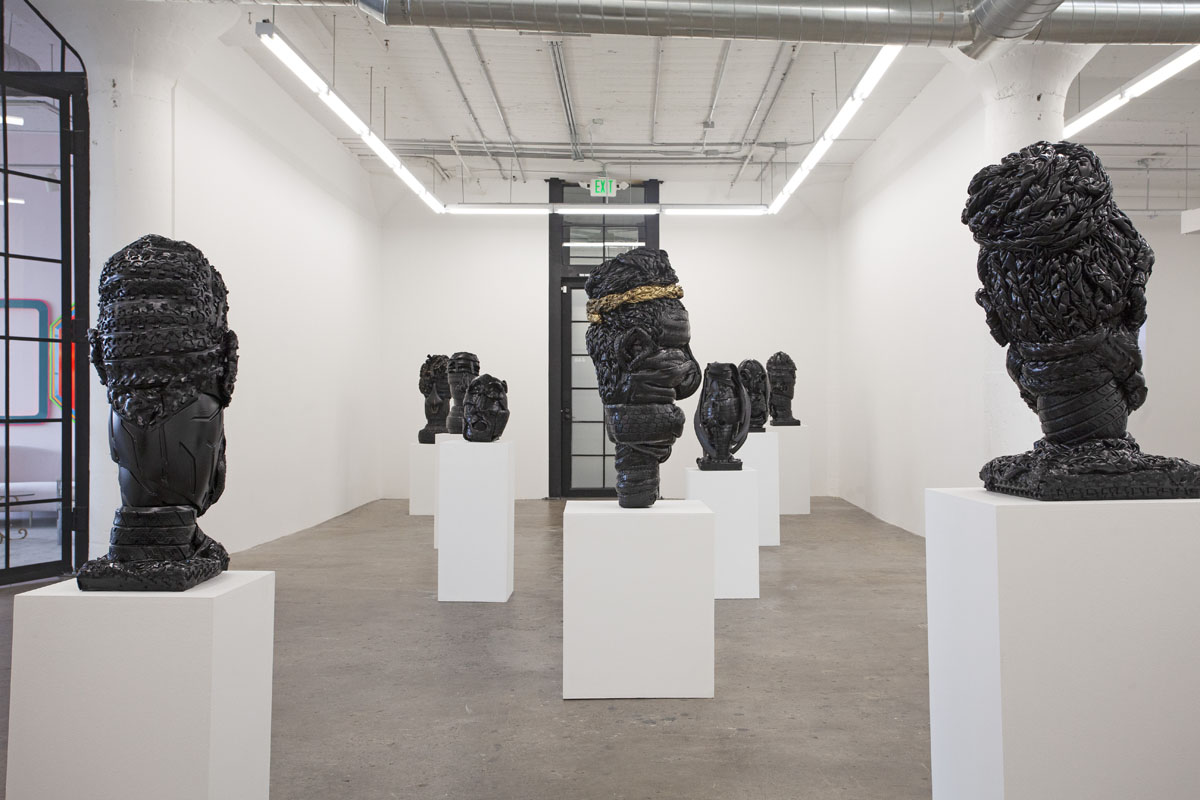 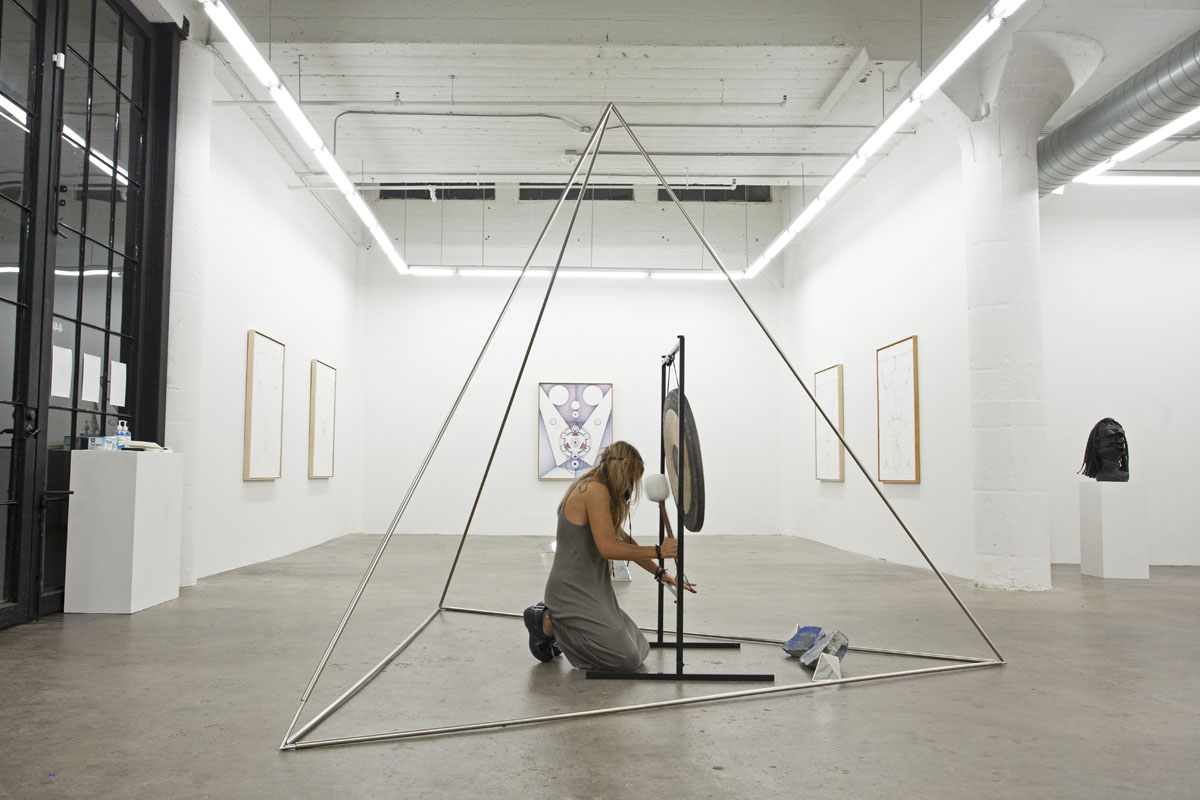 “The ‘sexual’ display of these female figures reflects the huge numinosity of the prehistoric divine feminine, and of her magical genitalia. The functions of fertility and apotropaia, which count among the functions of the early historic display and dancing figures, grow out of this numinosity and reflect the belief in and honoring of the powers of the ancient divine feminine.”

The Feminine Divine is an exhibition inspired by early Neolithic Goddess idols, where the female figure is often seen displaying Her large, magical vulva. These sacred figures embody and enact an empowered, magical female sexuality, emblematic of fertility. In ancient matrifocal cultures, we find the earliest form of abstraction where female genitalia are represented by The Sacred V—a motif found in Garcia’s work. In Garcia’s drawings the female genitals are displayed as geometric cosmologies similar to mandalas, yantras or sacred sites seen from above, and operate as meditative tools, devotional objects, and portals to inner experience. In this exhibition the artist shares a representation of the female form that challenges the historical narrative and instead enacts the numinous power of female sexuality.

In a time where we are seeing patriarchy fail destructively it is important to know that there have been viable and sustainable alternatives to a culture of domination. Egalitarian, ecological and peaceful cultures that acknowledge and honor our interdependence with the Earth, the Cosmos and all of life. Spiritual cultures led by Womxn priestesses, where non-binary persons hold significant and magical roles. Cultures where the Womxn is worshipped as a powerful creatrix/destructress, and where time is a cycle of birth, death and rebirth. A culture at the very dawn of humanity, when “God was a woman, do you remember?”

In the middle of the exhibition is a minimally structured pyramid made of six stainless steel rods where the base of the pyramid touches the earth, while the top points to the sky. A pyramid that is meant to be entered. Drawings and geometric sculptures surround the pyramid and act as protective guardians. The pyramid amplifies the energy of the drawings. Together the objects and drawings create a temple complex or sacred site.

The exhibition also features a hypnotic video filmed on the island of Ibiza, Spain. The artist uses her body as a vessel for a ritualistic performance borrowing from ancient Goddess iconography. In the video Garcia plays with the reflective quality of geometric, mirrored sculptures similar to the sculptures placed within the installation. By channeling feminine wisdom and spirituality, Garcia’s body serves as a bridge between terrestrial elements of the earthen ground and the cosmic qualities embodied in the beams of light reflected from the Sun. Emanating from the video are the sounds of healing bowls, an offering which intentionally invokes  a kind of meditative, spiritual experience.

The Feminine Divine is an invitation into a world of symbols. Symbols intertwined with humanity’s earliest beginnings, symbols of creation, destruction, birth, death, rebirth and inner experience. Symbols that activate potent sexual, and numinous powers. The exhibition is a journey into feminine consciousness.

Wisdom Embedded in the Treads

Kim Dacres honors her rich cultural heritage by creating sculptures that speak to the presence of black bodies and cultural identifiers in relation to social environments and the underlying knowledge gained from these experiences. She converts the rawness of rubber tires and tubes into expressive portraits of black and brown people. Her practice also showcases a sustainable way of producing and consuming art by “reusing, rebuilding or utilizing the resources we have around us.” Wisdom Embedded in the Treads is an ode to black identities, bodies, beauty, resilience, femininity and pride.

Dacres finds the inspiration for her work in her everyday life as an educator, community activist and family member, in the human qualities and stories of those around her. Seven figurative busts made from rubber tires are directly inspired by real people, her family and friends. One sculpture, Spoil Your Nose, Spite Your Face (Cutty), is inspired specifically by language and cultural idioms while Whitney, Untitled (Rude One), and Peaceful Perch focus on the intersection of race and gender in public space. “My message in the show title, Wisdom Embedded in the Treads, indicates that skin color and hairstyles alone do not singularly tell the story of an individual. I call attention to the material as a value-add beyond race that extends to implicit knowledge. The sculptures come from the range of my relationships, sizes and perceived gender expressions,” says Dacres.

The installation comprises eleven sculptures made primarily of recycled rubber tires and tubes sourced by the artist in bicycle shops, mechanic garages, construction sites throughout the Bronx and Manhattan and sometimes directly off the street. Dacres first started experimenting with rubber in 2008 while attending Williams College, Massachusetts. Driving on a deserted highway, she would pull over to pick discarded rubber up. The material held many qualities that would prove to be valuable in Dacres’ practice. It was heavy, durable and once unraveled from the rim, could be utilized as a line or in layers and it was also a lot more cost effective than working with wood, metal, or casting materials. “After that moment, I realized I would never run out of materials and that the material itself represented a universal sense of mobility and freedom that I wanted to feel.”

Kathryn Garcia (b. 1978, Los Angeles, CA) lives and works between Los Angeles and the Mediterranean. Inspired by her spiritual practice and travels to ancient and sacred sites, Garcia works in a variety of media, including site-specific performance, video, sculpture, and drawing. Provocative and oftentimes interactive, her work engages with the Goddess Archetype as a means of reclaiming identity vis a vis the female body. Garcia’s bodies—her body, or the constructed bodies seen in her drawings—are created as vehicles for spiritual experience where a female body becomes a sacred site. Her interactive works explore themes such as healing, mindfulness, participation, interconnectedness, and the experiential in art and are meant as offerings to the public. These offerings take place within immersive sculptures that the artist considers temples. Early on in her career, Garcia worked on international projects with Emi Fontana and Rirkrit Tiravanija, such as Women in the City (2008), Palm Pavilion (2008) and Asile Flottant (2010). Garcia’s work has been exhibited in the US and abroad, including The Orange County Museum of Art, Santa Ana; LAND, LAXART, Various Small Fires, 356 Mission, and Harmony Murphy Gallery, all in Los Angeles; Pace Gallery, Invisible Exports, GBE, Participant, PS1-MOMA, all in NY; Ballroom Marfa, Texas; The Power Station, Dallas; Nina Johnson, Miami; Southard Reid, London; Embajada, Puerto Rico; Arredondo/Arozarena, Mexico City; and DESTE foundation, Greece.

Kim Dacres (b.1986, Bronx, New York) is a Jamaican American artist and teacher. She received her Bachelor’s degree from Williams College as a dual major in Art Studio and Political Science, and minored in Africana Studies. She has her Master’s degree in Education focusing on Teaching English as Second Language K-12 from Lehman College at the City University of New York. Dacres approaches her work as an educator with enthusiasm for life and accountability for the stories of everyday people of color. She formally began her full time art practice in 2017. In 2018 Kim had her first yearlong public art installation, Peaceful Perch, in Harlem’s Marcus Garvey Park. In 2019 she completed her first solo exhibition, Swerve Team Meeting, as an emerging artist fellow at the A.I.R. gallery in New York City. This coming fall, she will participate in a group show at Galleria Anna Marra in Rome and in Spring 2021 she will be a fellow of the 40th cohort of the Bronx Museum’s AIM program. Kim lives and works in Harlem.