The researcher and curator Monserrat Rojas Corradi and the critic and art historian Diego Parra Donoso explain the long process carried out by the agents in the world of culture, arts, and heritage to be recognized as a vulnerable sector in the context of the Pandemic, focusing on a specific aspect of contemporary art guild work linked to the allocation of social aid for their community. 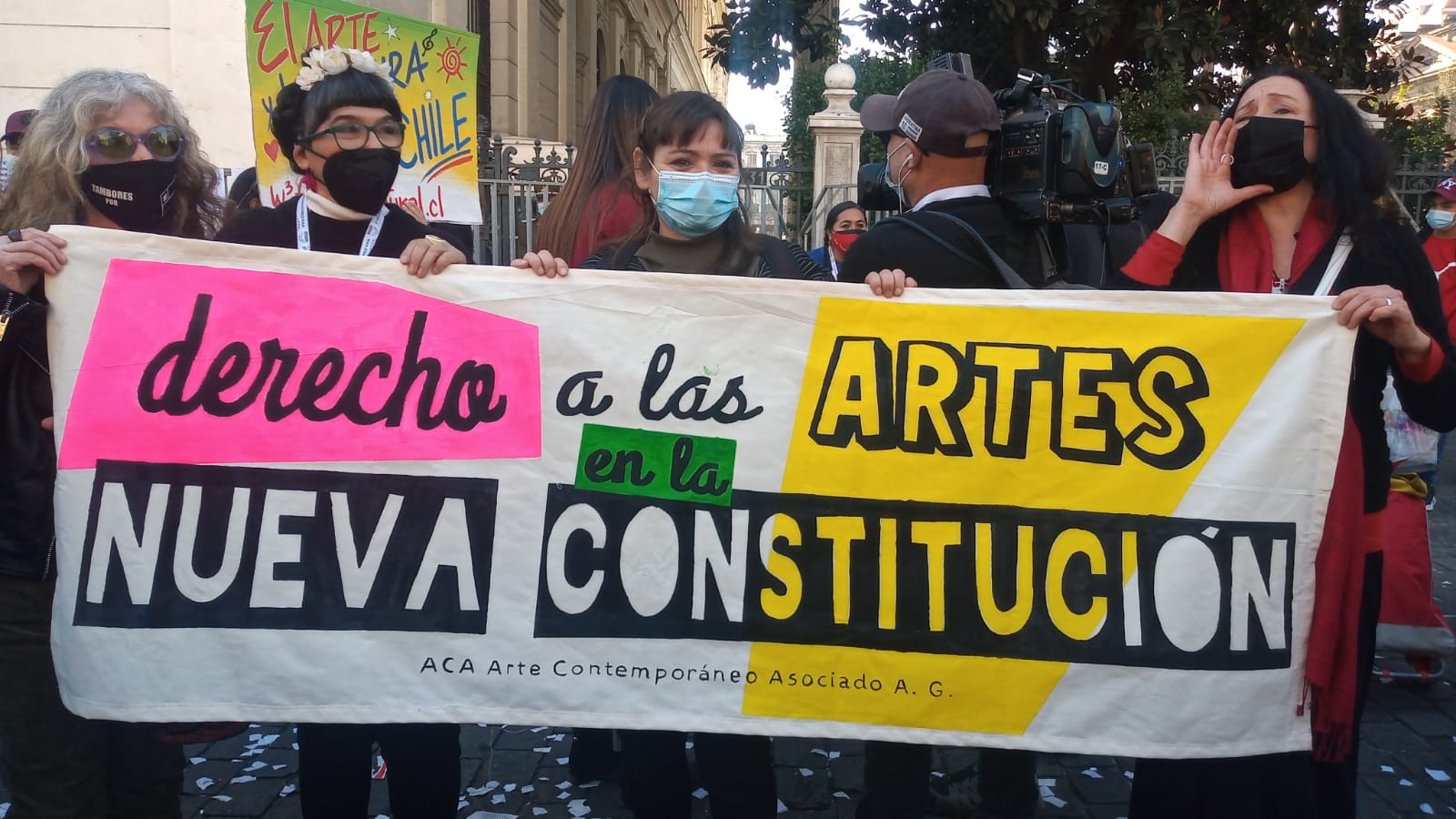 How to redefine the role of culture and arts in times of pandemics in a neoliberal society? Going to a shopping mall is more valued than visiting a museum, a play, an opera or a concert. Perhaps this question sounds superficial and obvious, but after a long period in which we have been unable to work, it is necessary to question it.

The Latin American context imposes certain principles of reality that make this question complex to address in a unitary way and with a satisfactory answer (especially if we compare it with countries where the “welfare state” prevails). In Chile, at the local level, the upper class is not empathetic with the most disadvantaged classes, nor does it value the arts sector despite the fact that it allows access to what the French sociologist Pierre Bourdieu called cultural capital, who links access to these formative instances with the “cultivated” of the subject. Although it is usually thought; the greater the cultural capital, the greater the valuation of artistic work, something happens with our elites who do not recognize these activities as valuable, both from the private business sector and the state. In Chile, it is enough to note the absence of the notion of “wage” associated with artistic work, where it is always remunerated in transgressive ways which do not directly link hours of work with a certain amount of money; these working conditions for art workers prevent any kind of dignity in what we do.

When talking about these issues, a conceptual confusion usually appears and we believe this affects the debate itself. This is the mistake of equating “culture” and “arts”, an issue that although from the social sciences can be effective or even beneficial when we refer to the specific work of the multiple agents involved in contemporary art it ends up hurting us. Culture is a global concept that crosses all areas of society, from the climate crisis to migration, childhood, politics, etc. Whereas the arts are specific cultural expressions, mobilizing symbolic contents produced from the culture in which these practices are inscribed. Arts have their own history and “rules” as an institution, in other words, they have their own specificity that the category of “culture” cannot capture (due to its breadth). For this reason, we consider for the purpose of the labor discussion, it is better to identify ourselves as art workers (knowing that this other concept is under constant discussion).

This confusion has permeated the relations we have with the state as a sector, a matter during the pandemic that has done nothing but hinder the concrete actions of help and encouragement it can dedicate to all workers in the arts.

Should we define what culture is again? This is a long unresolved discussion, but we like the definition given by Néstor García Canclini: “of the few consensuses that exist today in studies on culture, there is no consensus”. This could explain why in many cases the State does not know where to classify us in the labor field, which implies we are not recognized as (art) workers. It is usual in official texts, in fact, to find the notion of “creator” as the only field-specific reference, on the one hand, it responds to a nineteenth-century imaginary of the romantic artist; and on the other, it is exclusively linked to artists as makers (only those who produce objects), leaving aside all the mediating agents that make up the art ecosystem, world, circle or institution (pedagogical mediators, curators, assemblers, art historians and critics, etc.).[1]

In February 2020 it was rumored that a virus would provoke a pandemic. In Chile, we were still immersed in the revolt of October 2019, this period had already implied the closure of several cultural centers and museums located in the center of the capital (the meeting place of the days of demonstration). No one suspected a massive shutdown in the wake of coronavirus, resulting in a collapse of the art system. As much as we consider art and heritage as a vital part of the work of societies, it was demonstrated that for the “common sense” there is no problem in the fact that museums and spaces dedicated to the cultural industry (except for concerts) are closed or seriously reduced in their operation. It seems this was only necessary for us. We could speak then of a closed elite and no matter how much work of mediation and education for the audiences the institutions do, they do not seem to understand anything.

By contrast, if mining workers, garbage collectors, public transportation workers go on strike or stop working, the whole country comes to a halt and the government has to enter into negotiations. If art stops, nobody cares. In this context, several unions and guilds have come together to put an end to this indifference. On the one hand, they tried to negotiate with the government different ways of dealing with the disasters produced by the pandemic, creating work tables, but the Ministry of Cultures did not agree to any request and the unions finally chose to give up. Did this imply any kind of change? No. The indolence of the authorities, we believe, is explained by the lack of social recognition of artistic practice as a job.

The idea of art as a hobby, as a privileged dedication, or worse, as a frivolous activity, still persists.

For example, from La Coordinadora Intersectorial Cultural en Emergencia (CICE),[2] we managed to implement exceptionally tax codes related to our work, to gain access to the “Bono Pyme”, an instrument that gave money to small and medium enterprises directly affected in their income by the pandemic. In the beginning, artistic activity was not included in this bonus, so we did not exist as an industry for the State, despite contributing 2.2% of the GDP. At the same time, it is also unclear how we could access other types of social benefits, since it was only very late that the artistic field was introduced as a workspace in the Social Registry of Households;[3] a tool used by the State to determine the socio-economic situation of families when it comes to distributing allowances, subsidies, bonuses, etcetera.

In November 2020, the Minister of Cultures said: “A peso that is placed in Culture is because it is not placed in another program or need of the citizens.” This made us recognize as a sector the null valuation and recognition of our work from the highest instance of the State. That is to say, if the highest level of government does not consider we are a contribution to society, it is difficult to fight for more visibility. Added to this is the popular belief in which “artists” are only television actors and “famous” musicians, preventing us from seeing there are many of us working in this field, far removed from the glamour and luxury that characterize the former. There is a prejudice towards the sector: being an arts worker means that you do not work. We are not looked upon favorably. 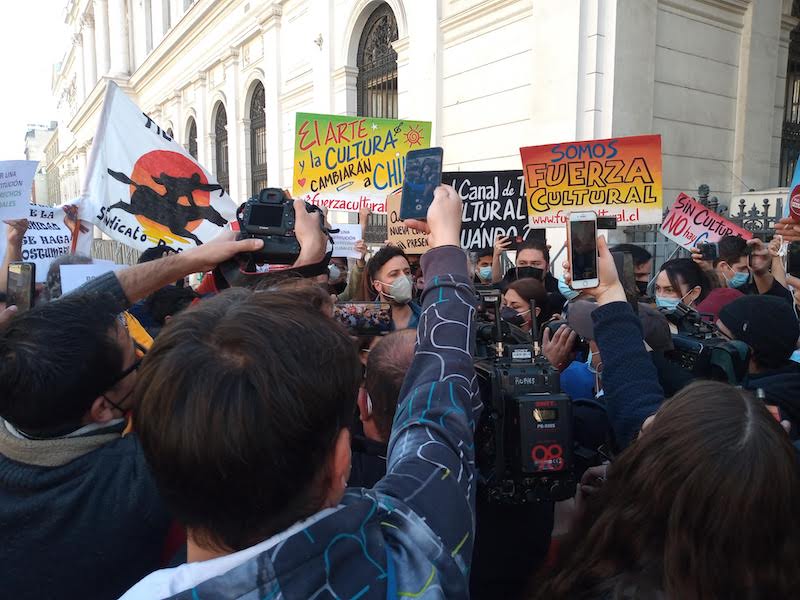 In January, the idea of Bono cultura covid (Covid Culture Bonus) arose as part of CICE’s union work and was presented to the Parliament’s Finance Committee. After long conversations, the government finally acknowledges they do not know how to deliver this bonus, as they have no idea how to categorize the work we do. In other words, the funds earmarked for the COVID crisis do not contemplate any reactivation program for the arts sector, since the state lacks the legal tools to define specific aid. At the same time, we saw how the retail sector, gastronomic, and tourism entrepreneurs, among others, lobbied directly and achieved their goals by relaxing certain health protocols. Those did not apply equally to cultural spaces, which continue to this day with reduced capacity and access barriers harming the poorest.

Until now, more than a year and a half after the beginning of the pandemic, as an artistic sector we are still waiting for the state to change the relationship it establishes with us. Stop being seen only as an expense and become recognized first as workers, and second, as transforming agents in the broad context of culture.

Many of the political and cultural changes that are currently taking place in Chile (because of the Constitutional debate) will be worked by artistic agents, who will give shape and meaning to a period we are still experiencing too closely. These agents deserve a new treatment outside the traditional cost/benefit logic. We would not want to give in to strictly economistic arguments to assert our importance as a sector, but if we have to assume the technified and bureaucratic voice of the system to achieve our political objectives, we will do so as many times as necessary. The arts are a necessary cultural manifestation for societies and they can no longer be understood as a luxury service only for an elite, but to change that paradigm we must first be able to recognize the dignity of artistic work. In the meantime, and following the recent refusal to allow Bono cultura covid, we will continue to insist on defending the value of our creative work.