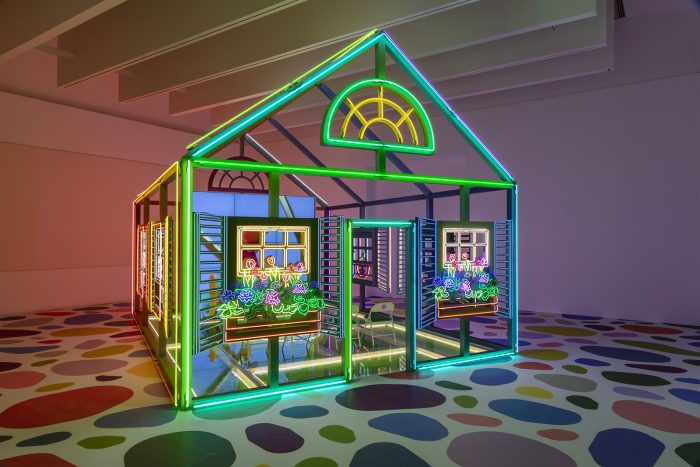 Passing for Beauty: Does an exhibition need to look political to be political?

It begins with joy. Or, more precisely, “museum joy.” This is the aim that curator Ingrid Schaffner has articulated for the 57th Edition of the Carnegie International. It is emblazoned on the requisite tote bag and highlighted in The Guide, the first of two publications to be produced for this exhibition that includes some stunning artworks by some very good artists such as Huma Bhabha, Zoe Leonard, Ulrike Müller, and Postcommodity, but, as I will explain below, is reluctant to call attention to itself as an exhibition per se. Childhood, one of the four “frequencies” defined by Schaffner for this exhibition, in addition to politics, beauty, and sound, is the main curatorial axis that seeks to recall a pre-cognitive state, one in which we allow ourselves the possibility of unfiltered experience. But is the proposition of this frequency an infantilizing gesture, one that works in cahoots with beauty to restrict the agency of the viewer and minimize the politics at play in either the artworks or the exhibition?

In the first gallery, whose entrancehas a Sol Lewitt drawing commissioned for the 1985 International, one can find abstract works by Sarah Crowner and Ulrike Müller who collaborated to produce an installation that is joyful in its unabashed visual pleasure, evoking not only the playful biomorphic forms of Matisse, but also his dictum to look at life with the eyes of a child.  Matisse believed that we needed to look at objects without preconceptions and encounter them with a pure and direct experience. This notion became central to some strains of modernist abstraction, which eradicated the nameable object and foregrounded its more phenomenological aspects such as a shape, color, and surface. While neither Crowner nor Müller are artists that espouse this kind of dogmatic formalism, in this entry to the exhibition, we are enveloped by the experiences of form and encouraged by the curator to leave behind preconceived notions about art or exhibitions.

The experience of the child’s viewpoint is furthered at the far end of this first room, with a video installation, Lake Valley (2016) by Rachel Rose. This work consists of an animated video made from 19th and 20th century children’s book illustrations. It follows a rabbit-like animal that is the pet of a suburban family who leaves the confines of domesticated life for the wild adventures of a forest. Here we see an image of childhood that is less prone to the Romanticism of innocence that Matisse employed. Instead, Rose’s work imagines the perceptual prism of the child as one reeling with emotion—not only joy but also deep fear, anxiety, and dissatisfaction.

Another work that alludes to the potential underbelly of childhood stories is an elaborate video installation by Alex Da Corte that includes a house made of neon walls and a large screen showing cartoons that have been transposed to live action. The glowing colorful tubes that describe windows, doorways and flower planters exaggerate their forms, turning them into a kind of sculptural animation. The videos within include Mr. Rogers and his Neighborhood of Make-Believe, a 1950s puppet show that in this case, traps the puppeteer Mr. Rogers in an endless feedback loop, perpetually putting on and taking off various colored cardigans. Another vignette shows the Pink Panther lying down on an ironing board, running a yellow iron over their own white belly. Just as the house becomes an animated sign of a house, abstracted away from the real, the cartoons are brought to life with actors, pushing the level of uncanny absurdity that one finds in cartoons to new heights.

What is behind the impulse to tune into the frequency of the child? For the uninitiated museum visitor it suggests a forgiving attitude on the part of the institution. If a curator assumes that one doesn’t need to know anything to approach a work of art then anyone walking into the exhibition can experience it on their own terms. They don’t need to have an education in art history or contemporary art or the subject matter of the work, instead this attitude attempts to flatten the playing field and brings us together to start at the same level, regardless of education or professional expertise. But for those of us that live and work in the art world this sounds like a call to bring us back to a kind of pure experience, to get away from wall labels and any mediation, and force us out of searches for the authorial intention—either the curator’s or artist’s. The viewpoint of a child forces us all to act like tourists in a foreign land—toggling between raw experience and the occasional glance at a guidebook and a map. 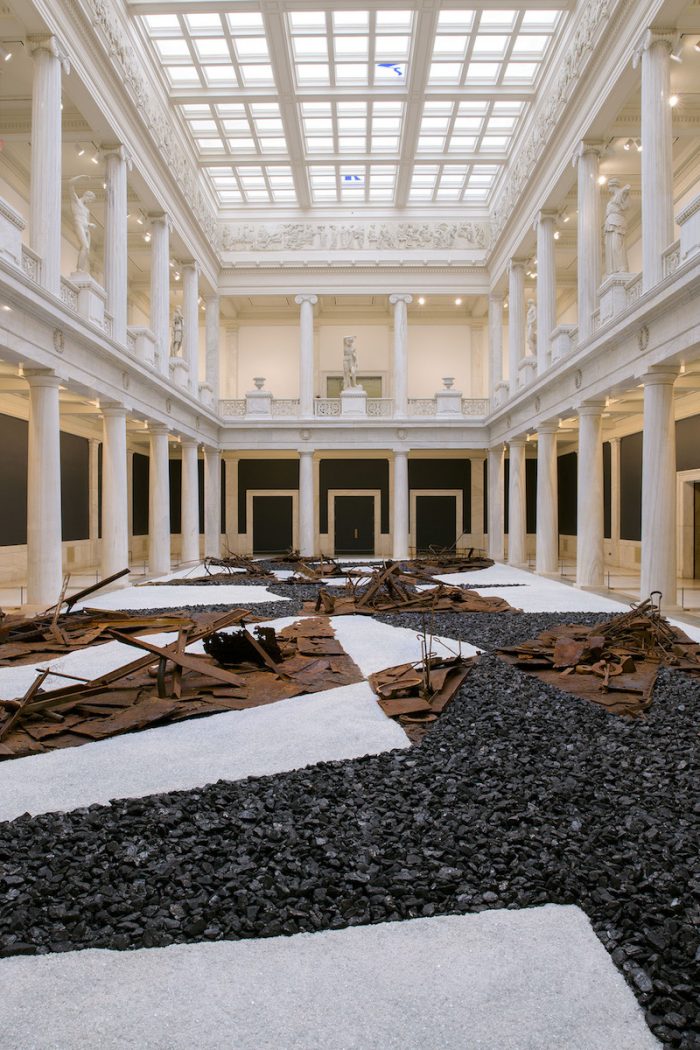 One might think that this is a retrograde attitude, one that smacks of Adorno’s aesthetic autonomy, the reactionary calls for beauty from Dave Hickey in the 1990s, or the ridiculously cliché premise of the 2017 Venice Biennial Viva Arte Viva. Perhaps, it is a reaction to the all too common vague political posturing of the biennial circuit or the notion of the curator as author, who must articulate a position. But Schaffner insists that she did not intend this International to be reactionary in any way. In an interview with me she said that while she came up as a curator during the rise of institutional critique, at this moment “critique is not going to carry us forward.” Rather, she believes that imagination, interpretation, and seeing other possibilities for the world that we want has much greater potency.

Perhaps one of the ways to think about this is through an interplay between multiple frequencies that Schaffner asks us to think about such as beauty and politics. If we return to the beginning, looking at Ulrike Müller, we should remember that her abstract compositions are a part of a practice in which the artist seeks to fuse abstraction with queer politics and questions around bodies, gender identity, and representations of subjectivity.

Or we could look at Postcommodity’s contribution, a massive abstract composition in the Hall of Sculpture, made of steel, crushed glass, and coal. Looking down from above, from the perch of the balcony, next to a Nicole Eisenman sculpture from the last International, one might see a pattern of aesthetic forms. But this work, From Smoke and Tangled Waters We Carried Fire Home (2018) is a 3,200 square foot score for a solo jazz performance that draws on both the labor history of Pittsburgh and the area’s indigenous past. The pattern is an abstraction of a feathered horned serpent—called ‘Uktena’ in Cherokee—but its materiality evokes the labor history that lies at the root of a robber baron’s legacy. As one of the most important US industrialists of the late 19thcentury, Carnegie was responsible for producing the steel that fueled the expansion and development of the United States, a process that contributed to the continued erasure and disenfranchisement of indigenous communities. He also was responsible for violent clashes with organized labor such as the 1892 Homestead strike, in which he hired three hundred Pinkerton agents to retake a steel mill that had been occupied by its workers. With these skirmishes in mind, Postcommodity’s pattern also evokes the image of the factory as a battlefield with crumpled steel and shattered glass strewn across its floor. 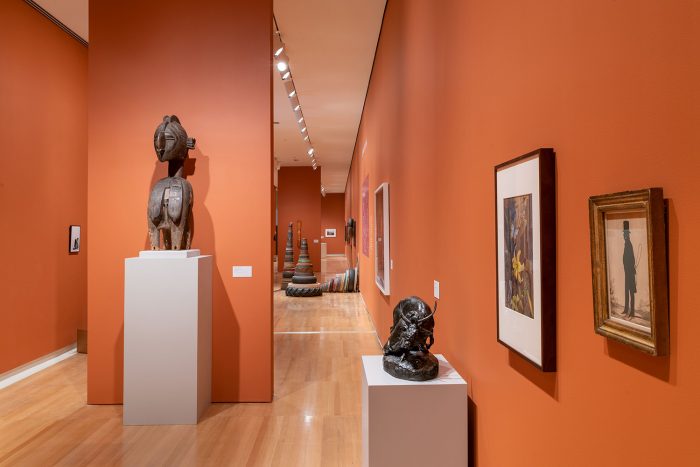 Another work that evokes the histories that lie at the intersection of Carnegie and the United States is, Dig Where You Stand (2018) an exhibition within an exhibition by Koyo Kouoh, a Dakar based cultural producer. It includes a range of objects from within the Carnegie’s collection including not only artworks that evoke industrialism like Irwin David Hoffman’s Lace Makers, Puerto Rico (1944), or a set of quintessential photographs of burnt out industrial buildings by Berndt and Hila Becker; but also a bald eagle caught in the crossfire during the civil war, a set of peppered moth specimens that demonstrate industrial melanism, an English tea set, and a Baga D’mba headdress from the early 20th century. In this room, set within the permanent collection, we see a complex rhizomatic system of ideas on display, or to infer from the work’s title, an archeology of power within an institution’s holdings.

Another exhibition within an exhibition, Dusty Groove II, Space is a Diamond, was made by Josiah McElheny, with John Corbett and Jim Dempsey. It centers on avant garde, self-taught or experimental musicians such as Pauline Oilveros, Sun Ra, and Lucia Dlugoszewski. Instruments, drawings, scores, and videos chart out a fascinating archive of sound history. McElheny also included new sculptures that he made in response to this history like Black Cloud Chamber, a large cluster of black glass ovoid forms that supposedly both hear and make sound to honor Oliveros’s belief in radical empathy. 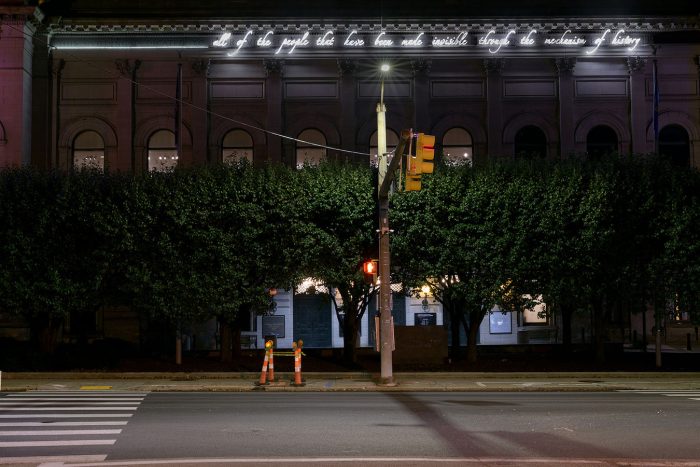 It’s interesting to note that these two exhibitions embody more flexible forms of exhibition making than the International as a whole and more explicitly engage in the politics of aesthetics. But one radically political act that is built into the Carnegie International is the fact that it is Working Artists and the Greater Economy (WAGE) certified. WAGE is an activist organization that advocates for sustainable wages and worker rights for artists. So, while the Carnegie International might not look like institutional critique, by adhering to WAGE standards they are.

One question that I asked myself about this exhibition was: for Shaffner, are beauty or joy devices to act like a Trojan horse to smuggle politics into either the institution or into its viewers’ consciousness? Or are politics closeted, repressed, and passing for beauty? To complicate this, what can we do when institutional critique has entered in to a post-critique era? One in which Andrea Fraser has declared L’1% c’est moi? Does an exhibition need to look political to be political?

Noah Simblist is Chair of Painting and Printmaking and Associate Professor of Art at Virginia Commonwealth University. He works as a curator, writer, and artist and has contributed to Art Journal, Modern Painters, Art in America, Art Papers, Terremoto, Art Lies, Art Pulse, Art21 and other publications. 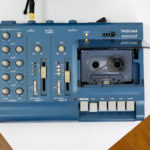 Where tears come from 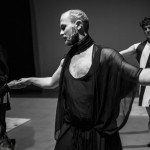 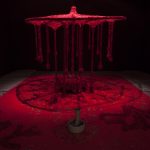