The gallery’s first solo show of Allan Villavicencio (Mexico City, 1987). The exhibition opens on April 27 and will be on view through June 26, 2021. 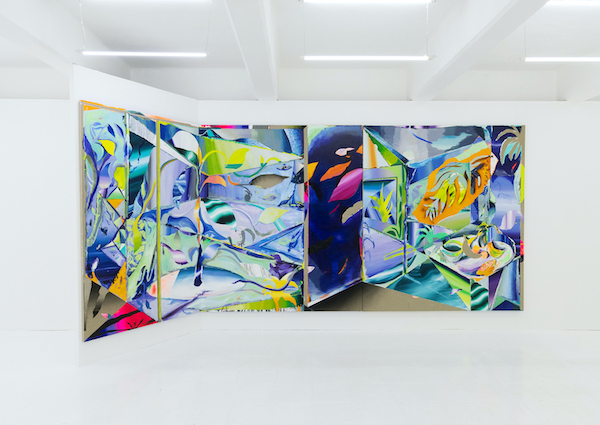 Pieles ciegas consists of a series of paintings and sculptures arranged around a large-dimension landscape, El cortejo [Courtship]*. Painted as a triptych, this work is wagered on the contradiction between visual illusions on the canvas and how one of its panels plays out in tension with the physical space of the gallery.

In this sense, Allan Villavicencio’s spatial imaginary refers to the changing state of material during an image’s construction, both visually and physically. By juxtaposing accumulation and excavation–and making use of multiple layers of paint and textiles–his works reveal the hidden, the impalpable, and the phantasmagoric side of things.

* Fernanda Ballesteros’s text that accompanies the exhibition is inspired by the spatial and material narratives entail in this piece.