The “boom,” or the postwar economic miracle, lifted Italy out of the fiscal doldrums but into an uncertain future where rapid economic growth threatened to eclipse earlier lifestyles. The female protagonists in Michelangelo Antonioni’s films of the 1960s, especially L’Eclisse (1962) and Red Desert (1964) become ciphers for the disorienting collapse of the links between the material and immaterial, body and psyche. 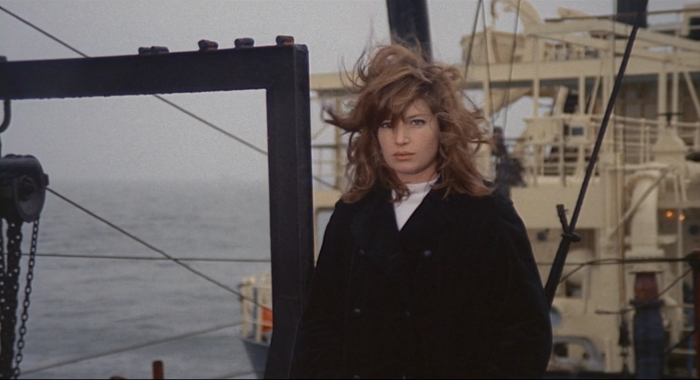 Although the last two films in Italian director Michelangelo Antonioni’s “tetralogy” from the 1960s, L’Eclisse (1962) and Il Deserto Rosso (1964), could be read as a portrait of bourgeois life in a postwar, post-Marshall Plan Italy, they are closer to science fiction. Most of L’Eclisse is set in the Roman EUR (Esposizione Universale Roma) district, whose wide avenues, modernist buildings and mushroom-shaped water tower are transformed into a space age, quasi-utopian community where humans, animals, and furniture are interchangeable. In Il Deserto Rosso, the sleek industrial landscape, depicted in beautiful, formalist compositions with a spare colorful palette, is contrasted with the toxic natural world, shown in ashy grays and blacks under an omnipresent and oppressive fog.

The films’ respective heroines Vittoria and Giuliana, both played by the captivating Monica Vitti, are models for living in these new societies. Although the women are completely different in temperament (Giuliana is mentally unstable and suicidal), Antonioni uses their characters to project a world in which humans’ physical environment—both manmade and natural—has inordinate power over their psyche and wellbeing. These films are existential science fiction.

Antonioni studied architecture earlier in his career, so he was finely attuned to the way a building responds to and alters the social atmosphere. However, film, which is in some ways the most atmospheric and immersive of media, is the perfect way for Antonioni to put his heroines in test tubes. Here, the imagined world is all encompassing and its formal language absolute. For Vittoria, living and non-living things speak to her equally, which can lead to isolation but also a new type of enchantment, while for the sensitive Giuliana, industrialization’s changes and its subsequent ecological degradation take a toll on her psyche.

Many have noted that Vittoria, the protagonist in L’Eclisse, cannot stop touching inanimate objects. She absent-mindedly fondles vases, statues, columns, jukeboxes, and furniture, to the detriment of her ability to make contact with other (male) humans. Exasperated by a messy breakup with her boyfriend, Vittoria declares to her neighbor, “There are times when holding a needle and thread, or a book, or a man—it’s all the same.” Some have argued that these instances of non-hierarchical human-object relationships point to the anxiety and alienation of modern life, where humans have been reduced to utilitarian objects. Antonioni was even nicknamed the “alienation director.” 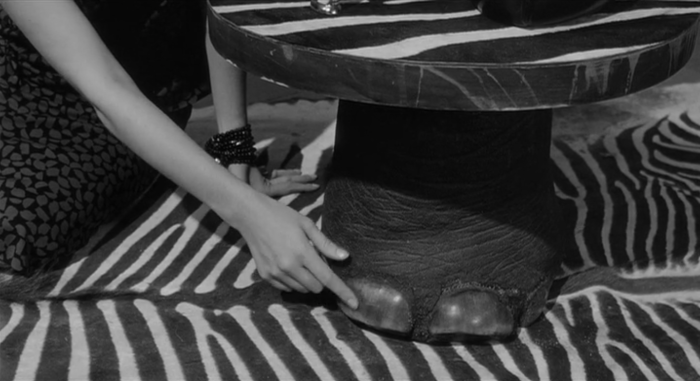 In the film, Antonioni’s camera, perhaps like Vittoria’s mind, does not prioritize humans. In the opening frame, a human’s shirted forearm is an abstract dash of white amongst a clutter of books, pens, lamp and painting. The arm belongs to Vittoria’s soon-to-be-ex, Riccardo, and his body is simply one more trapping of a leftist intellectual. Vittoria feels, as she says, “confused and disgusted.” If objects and bodies are interchangeable, then much of human existence is meaningless. Vittoria has an erotically charged yet superficial tryst with the pushy stock trader Piero, played by Alain Delon. Their initial chemistry is understandable, because he too can make people and things equal, but by monetizing them. 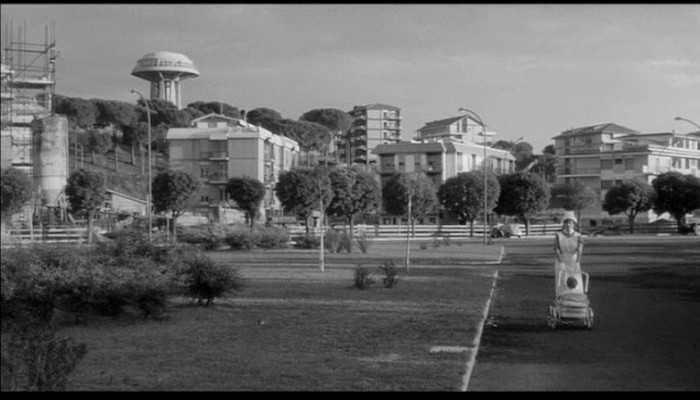 The potential hangover from a non-anthropocentric worldview would have been acute at this moment in history, when objects—both utilitarian and otherwise—seemed to be in excess. Rapid postwar industrialization and economic progress known as  “the boom” changed Italy. The old ways were threatened with new options for social mobility and the availability of the shiny delights of consumerism. Italian design advanced to new heights of acclaim and became a coveted status symbol, domestically and abroad. The characters in Antonioni’s films want for nothing; if anything, they are trying desperately to figure out how to live with the surplus of stuff.

Antonioni asserted (on several occasions) that he was not critical of modernization, saying, “it has never been my intention, in any film, to show the conflict between the human mind and technical progress.” Instead, he was interested in the drama of people who are in different positions on a spectrum of acclimatization to modernity(1). In several scenes of L’Eclisse, Vittoria—who is relatively well-adjusted, only bored—is not only subject to the disorientation brought on by modernity but also capable of reveling in its possibilities.

In an eerie nighttime scene, the floodgates of animism have broken open. Vittoria chases her neighbor’s escaped poodle through their EUR neighborhood in Rome. She catches up with the dog and says to him, “Up! Up!” and he complies, standing in his two hind legs like a human. Vittoria then beckons him to stay, saying “Listen, I have to tell you something,” but he walks away from the woman as she collapses in laughter. The dog, whose name is Zeus, is not only anthropomorphized, but he also refers to the ruler of the Greek gods, who was known to change shape to get his way (often with women). As the dog lopes away, Vittoria becomes entranced by a row of flagpoles as they vibrate in the wind, clanging and snapping rhythmically. The poodle Zeus and the flagpoles are brimming with energy—they are gesturing and communicating. 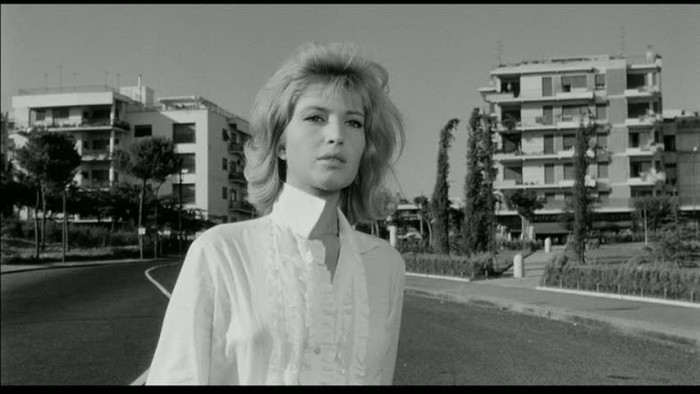 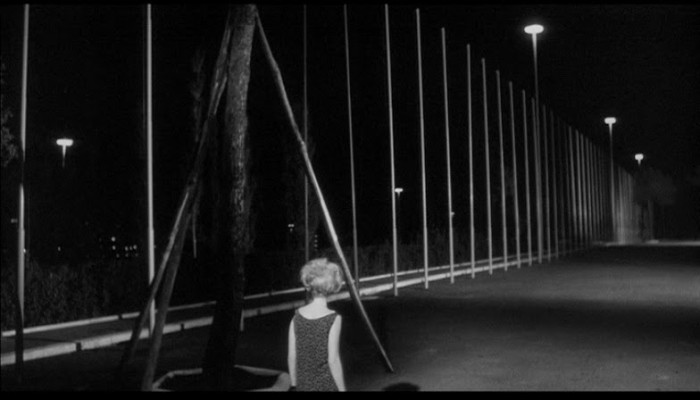 It is not coincidental that the EUR serves as a backdrop here, because it is a palimpsest of 20th century Italian history. Initially designed to host a twenty-year anniversary of fascism in 1942 (which never occurred), it was badly damaged in the war but finished and inhabited in the ‘50s anyway. The district’s Rationalist architecture is redolent with an aborted fascist future, and the semiotic function of the buildings has been completely destabilized. The uncanny behavior of the dog and the flagpoles could be interpreted as either the muted ghosts of fascism materializing, or, in a more ambivalent way, as Vittoria’s prehensile ability to listen to the new language of a world whose usual categories of distinction between object and subject are defunct. In the film she works, after all, as a translator.

Giuliana, the protagonist of Il Deserto Rosso, is not well. She is nervous, erratic, and plagued by night terrors since her hospitalization post-car accident, which may have been a suicide attempt. Giuliana cannot tolerate the changing world, and yearns for older ways. To the dismay of her husband, an upper-level manager at the local factory, Giuliana wants to open a shop in the center of old Ravenna. She doesn’t even know yet what she wants to sell, making it clear that it is simply a futile exercise in nostalgia. Instead, Giuliana is immersed in an unrelenting fog amidst colossal machines in the port town of Ravenna, where her neuroses mirror the polluted environment, still beautifully aestheticized by Antonioni’s deft, first-time use of color film. Others characters, like Giuliana’s young son, who plays with robots and metallic engineering toys, will be able to adapt better in the future. 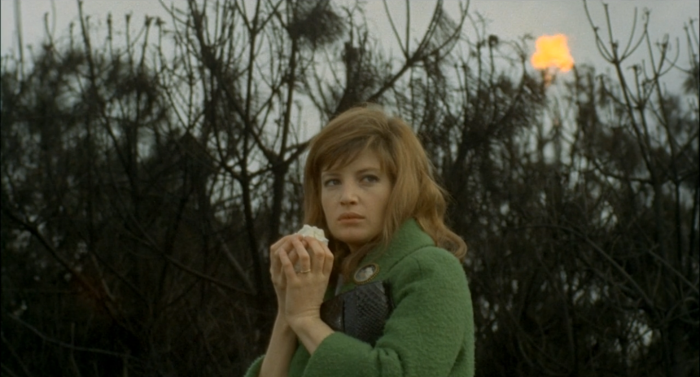 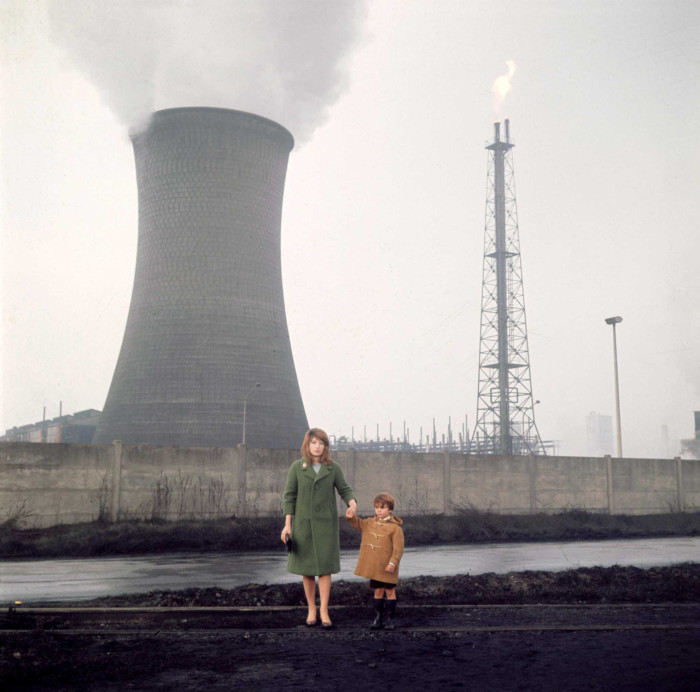 While her husband is away for work, Giuliana slowly falls into the arms of Corrado, who is her polar opposite. Corrado is visiting her husband’s factory in order to initiate a new trade outpost in Panama. He hopes to take men with him, and eventually relocate their families. Giuliana cannot fathom Corrado’s mobility; she can’t handle globalization. Standing together on an oil platform in the middle of the ocean, she says to Corrado, “If I were to leave, I’d take everything. Everything I see. All the things I use every day. Even the ashtrays.” 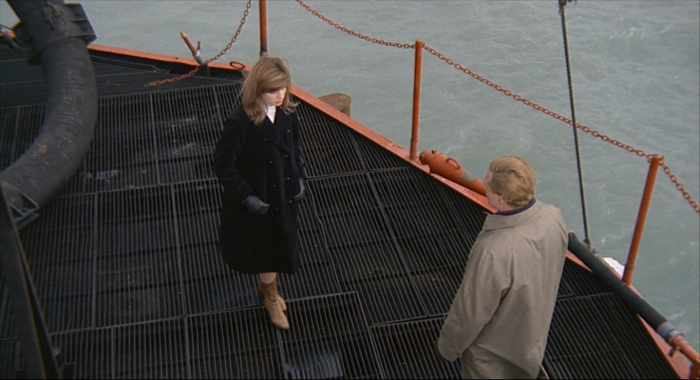 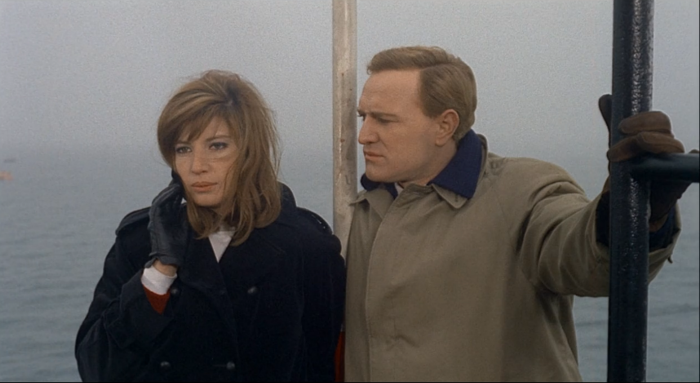 In both films, the idea of a faraway place is an indication of a crisis of meaning. In Il Deserto Rosso, Panama looms, either as a business possibility, or a threat, to Ravenna’s working families, while in L’Eclisse, Vittoria briefly visits her racist neighbor Marta from Kenya, who calls the indigenous black Africans “monkeys.” Vittoria, who has been touching the colonial accoutrements in Marta’s apartment, is temporarily relieved of her malaise at the prospect of an utterly exotic locale. She dresses up in blackface and drapes her body with African cloths and jewels, hopping around in her invented Orientalizing dance to the beat of Kenyan records. In Fredric Jameson’s “Periodizing the ‘60s,” he theorizes after decolonization, the West’s recognition of the “minorities, marginals and women” of the world as human beings led to postmodernism, and what he calls “adventures of the sign(2).” The word “adventure” is fitting, because it would have different connotations for our heroines. Vittoria would obviously relish the opportunity to leave behind the people and things in Rome who have not yet learned the alternate ways of communicating, whereas Giuliana would probably wither at the thought of an “adventure.” As with most Antonioni films, we are left with ambivalence, and the uncertain tremor of simultaneous joy and fear of the modern world. 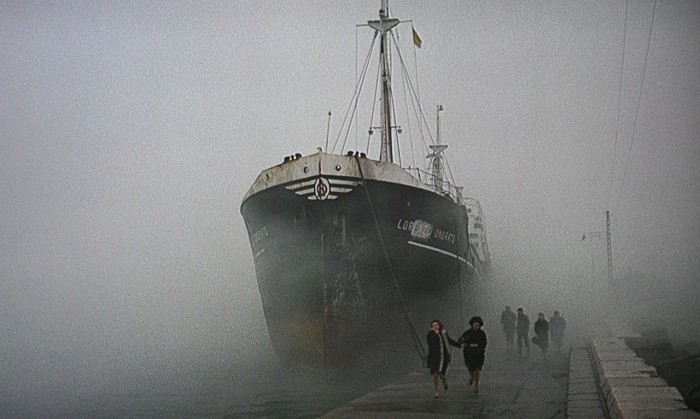