Debora Delmar Corp. combines mass-produced objects of daily use (like those that can be purchased at Costco, BB&B or Zara Home) to create assemblages and installations that critique these objects’ symbolic value -as bearers of ideas of well-being, pleasure, comfort and social mobility- therefore challenging the very ideals about them that are promoted through advertising and mass media. 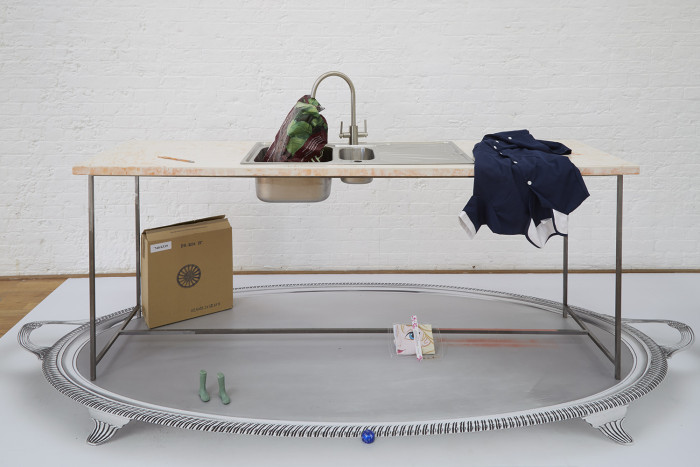 Merchandise represents the logic that objects correspond to the activity of consumption. Merchandise is framed by an ideology which wraps a determined object with a set of values of consumption and usage, but also with symbolic values, order and exhibition values. Additionally, merchandise presupposes a logic of objects with an administrative “life,” which among other things, is determined by the programmed obsolescence, or the fashion trends that arrive and transform them into waste. Merchandise also has a system: categories of objects that define groups of individuals. From this perspective, the world of objects regulates certain social significance. In the case of merchandise, its ethos is the arrangement of social groups according to a specific status. Thus, merchandise operates socially as a mechanism of fragmentation.

Debora Delmar Corp. (DDC) is the name adopted back in 2009 by the artist Débora Delmar to distribute her work, which focuses on the analysis of the “life-styles of capitalism and its aspirational aesthetics.” As such, the merchandise occupies a central role in Delmar’s projects. DDC produces object assemblages and complex spatial situations with these products. The merchandise that she uses correspond to this historic moment of global economy: objects that can be acquired practically anywhere in the world (Starbucks drinks, Zara clothes, teddy bears, and other products from the Kirkland brand) (1). DDC’s projects don’t limit themselves exclusively to the analysis of the object; rather, they cover an investigation on their commercial structure (publicity, types of display, store designs for consumption) produced, on most occasions, by transnational companies that are highly diversified in terms of products and mediums. Perhaps the best word to describe these type of global corporations can be attributed to Martha Stewart: Omnimedia. 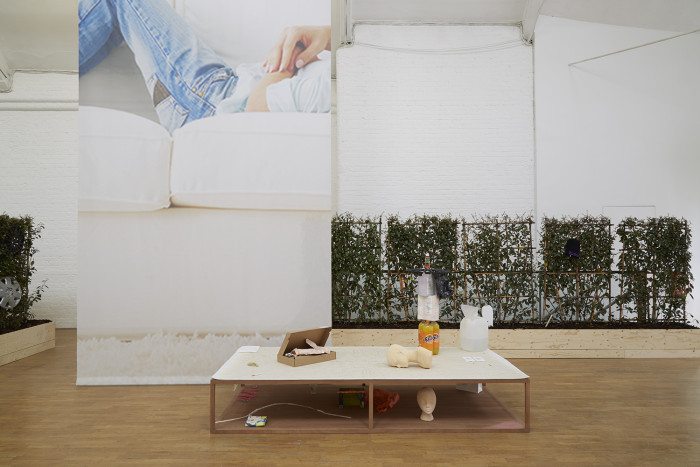 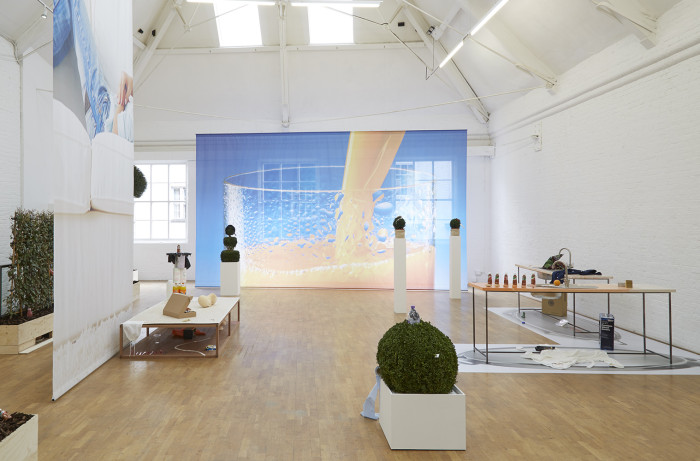 It’s not arbitrary to mention Martha Stewart. This character has been a reference for DDC’s production. In some of the works, she has emulated Stewart’s decoration style, described by some as “elegant and discreet,”, with the intention to extract it’s symbolic value, which can be enclosed in the image of the ideal world, designed by a successful blonde white woman who represents both the perfection of domestic atmosphere and the notoriousety of a savvy entrepreneur – CEO of her own omnimedia corporation (2). In A Female Touch (2014), DDC seems to mirror the decoration style of Stewart. The “contemplated attention to detail” Stewart uses to promote her products resonates with the inclusion of certain elements in the project (such as a pearl that decorates the hat in Pierre). Nevertheless, the mise en scène by DDC holds a distance with this character – clearly evident in the decision to use objects and images (like the background used in the Prezzi exhibition(3)), in which the color white overwhelmingly dominates.

Light consumption (from the series A Female Touch), 2014

In A Female Touch, DDC included some objects in her installations that had never appeared in Martha Stewart’s world – just as the cigarette box that’s part of the ensemble of objects placed on a shelf, next to a candle, a vase, a Zara shirt and a ceramic elephant from the 1920’s that Delmar purchased at a garage sale in France. The merchandise blends addiction and consumption, disrupts the idealized image of the domestic attributed to Stewart’s style, and which the compilation of objects and arrangements also reference. The same thing happens to the knife that stabs several clothing items from Zara, that lies under the sunlight while it rests on an old bed. As if it were a crime scene, the knife is near the clothing brand where most of Stewart’s and the merchandise’s commercial value lies. These brands look to convey pride, security, authenticity, and individualism. Another work which can recall Stewart’s care and aspiration while simultaneously disrupting those conditions is Centerpiece (2015): a pepper mill filled with authentic and fake pearls, resting on a bathtub pillow.

Contemporary model (from the series A Female Touch) (detail), 2014

DDC considers the strategies of display within its investigation of merchandise, specifically the decoration of consumption spaces and the way it’s being represented through images in advertising. The projects are not limited to isolated assembled units, instead they articulate complex space scenarios where multiple objects and images coexist. An example can be found in Body Blend Trade Culture (2014), which with its multiple arranged units alludes to the aesthetics of franchises like Starbucks. This project focuses on examining the new coffee consumption culture that was created after the previously mentioned corporation established itself as a commercial model emulated globally; it included several pieces that disrupted the idealized image of that product. An example of this artistic operation took place when an arrangement of objects referenced an anthropomorphic shape that could at the same time suggest a farmer in a tropical region in an impoverished location where the coffee grain is produced (just as it occurs in Mexico). Therefore, through display mechanisms, DDC introduced an element that recalled the production process of the merchandise. This dimension has no place in the world of consumption. In fact, a great part of a product’s success depends on this factor: the obscuring of the production process. Within the market, merchandise cannot have a history.

Until now, several projects by DDC contemplate the use of objects as a formal investigation of color. Generally there’s a distinctive color palette that defines the works: green in Pure+ (2012-2013), white in A Female Touch. In Body Blend Trade Culture, coffee was used to stain some fabrics and garments that were in turn part of the object assemblages in the exhibition. These works seem to comment on skin pigmentation as much as on the odd aesthetics of skin tanning. Hence the use of color in these works reminisce the strategies employed by publicity campaigns and the range of colors used to decorate spaces for the consumption of specific products. 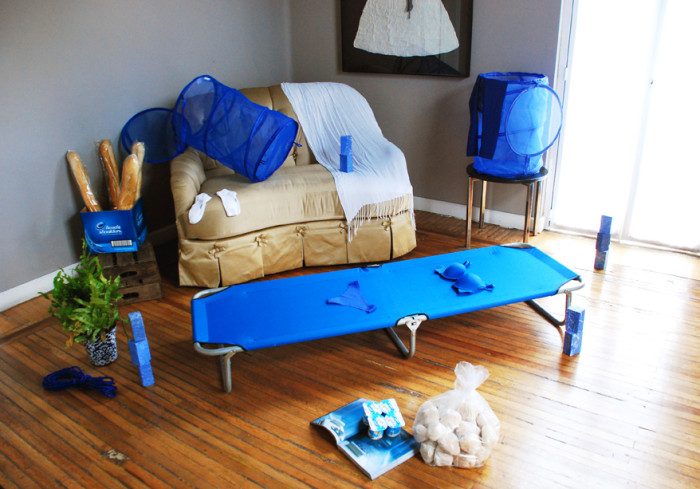 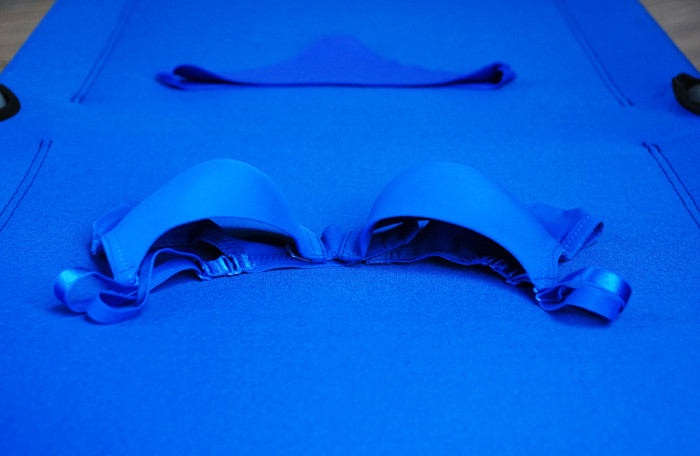 In relation to color, Care Concepts (2014) is a project that can be interpreted as a tribute to Yves Klein, the first artist to patent and transform color into a brand. For this, DDC revisited Klein’s Anthopometries using teddy bears. Just as Klein did, but with the colors inverted, she marked Costco’s stuffed bear silhouettes with white paint on a blue background (blue is also the color of social media companies like Facebook or even some cleaning products like Clorox). These works were hung in different ways to create an environment in the space: one stuffed bear was smashed by a glass as if it were a lounge table, and another one was buried beneath a pile of rocks. This can be seen from different perspectives, possibly alluding to some spa treatments as violent acts on the body. The work disrupts the idea of merchandise presented in the project through the image that leads the exhibition: a teddy bear that hugs a child while he sleeps. 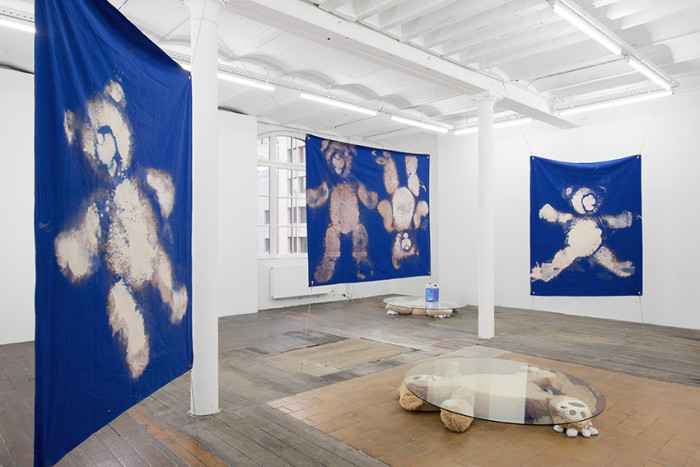 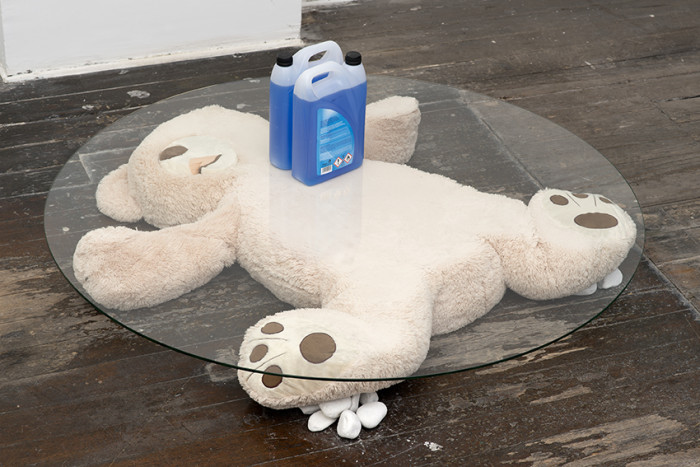 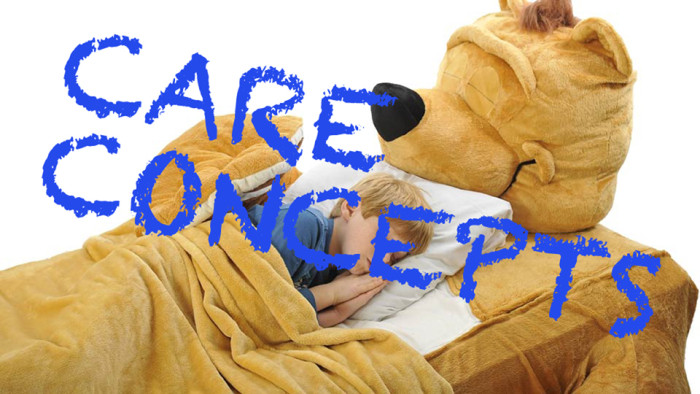 Kim Kardashian is another figure of interest to DDC. Opposite to Martha Stewart’s style, Kardashian represents waste and excess: of consumption, merchandise, life styles, exposure, and lust (4).

In some of the work in the Interiors series (2014), DDC included some prints of domestic decorations made using the app called Kim Kardashian: Hollywood – a game that promises to “rule in Hollywood’s red carpet and beyond (5).”  The app is a consumable propaedeutic; it’s the acquisition of multiple products that symbolize status and an established social rank. As Raoul Vangheim notes and Kardashian confirms, “in the kingdom of consumption, anyone can be king.”

Kim Kardashian reappears in Upward Mobility (2015) presented at Modern Art Oxford. With an obvious reference to the work of Jeff Koons, Kim K: Before and After (Brunette – Platinum Blonde) is  made with several works elaborated using topiary techniques, the ornamental trimming of certain foliage, which in this work creates two feminine silhouettes that can easily be associated with the celebrity (6). One has a blonde wig and the other one a brunette’s. As part of the installation, these pieces are accompanied by some male figures made with the same technique. As a series they are titled Johns. 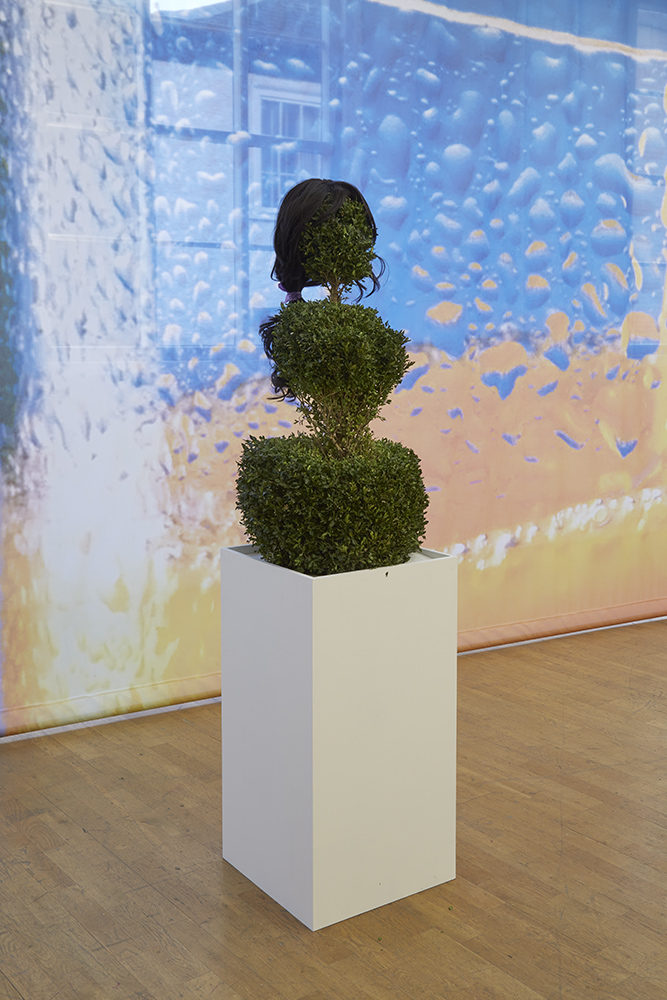 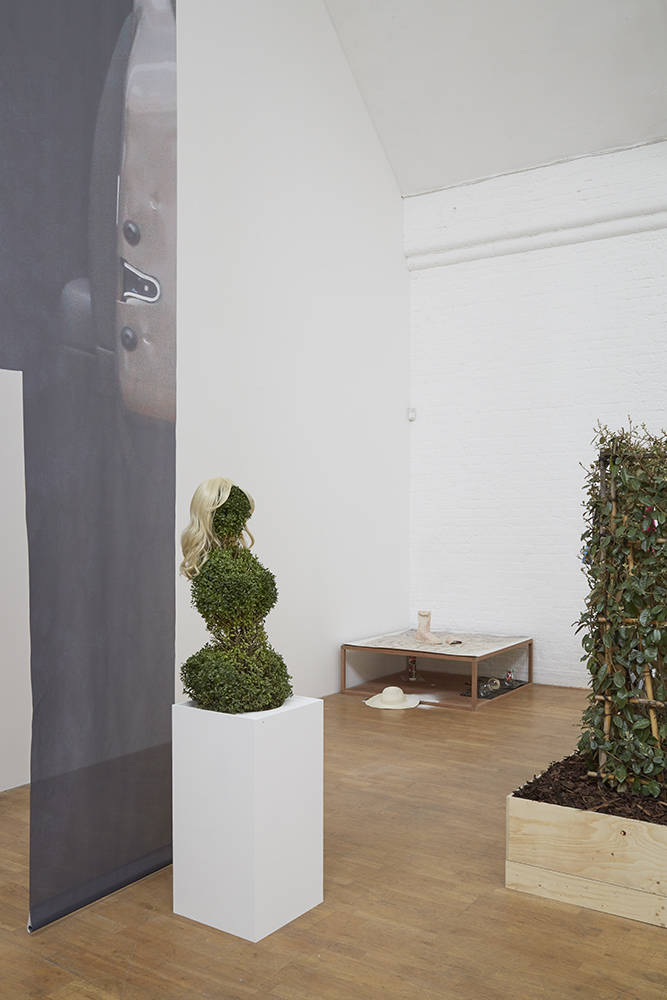 The ubiquity associated with this name takes on a new intention if one is aware of the source that ignited these topiary works: a note published in the New York Times revealing that the amount of relevant CEOs named John surpasses the total sum of all women within that same group (7). These works made by topiary trimming are part of a larger installation that represents a garden: a very important domestic space in England and globally associated with recreation and relaxation, as well as an ideal bucolic state. No doubt there’s a direct relationship with the presence and extension of the garden of a house with the economic level of those in residence. As in other projects, DDC introduces elements that disturb those values – from the exhibition to the way object assemblages are made, the materials and utensils used in the gardening process; to the use of a drink mix that stains in a very gestural manner, to a group of champagne glasses that contain miniature books inside (Luxury Study) – an ensemble that like Kardashian, addresses more the sense of waste and excess.

If in past projects, DDC has underlined the similarities between global merchandise and the work of art within the system of contemporary art (just as it happens with the way an international art fair is staged), with Kardashian she points to another recent phenomenon, almost in a realist’s manner: the relationship between contemporary art and what’s known as celebrity endorsement.

(1)Most of the merchandise used by DDC in her own projects are proof of the accelerated expansion of commerce at a global scale, of a reduced number of companies that saturate and replace several types of markets. In this sense, it’s not strange that DDC’s projects have emerged in a moment where neo-liberalist’s dynamics have fully settled in Mexico. In addition to these types of merchandise, according to Delmar the local products are used, as well as some brands from specific places like The White Company, London (UK), Itsu or the Juice mixes of Zuco, and Tajín bottles (MX)(in the case of Upward Mobility). I’m interested in the movement of such products to different contexts where Tajín and Zuco are transformed into precious objects of consumption, that don’t exist in other markets (like England).
(2) http://www.designsponge.com/2013/01/style-icon-martha-stewart.html
(3) It’s common for DDC to make presentations of Prezzi as part of most of her projects, with the intention of demonstrating, as corporate meetings, the multiple references she references.
(4) http://www.independent.ie/woman/kanye-west-doesnt-trust-kim-kardashians-taste-29888665.html
(5) https://play.google.com/store/apps/detailsid=com.glu.stardomkim&hl=en
(6) http://www.architecturaldigest.com/decor/2012-10/public-topiary-gardens-guide-slideshow?title=1
(7) http://www.nytimes.com/2015/03/03/upshot/fewer-women-run-big-companies-than-men-named-john.html?_r=1&abt=0002&abg=0

Hybridize or Disappear: a bodily speculation on immaterial visual cultures