As the last article of our exchange with Art & Market, the art historian Thanavi Chotpradit reflects on the political positions that have arisen in the Thai art system in the face of the massive protests that began on October 14, 2020, that demand a democratic reform beyond the monarchy. 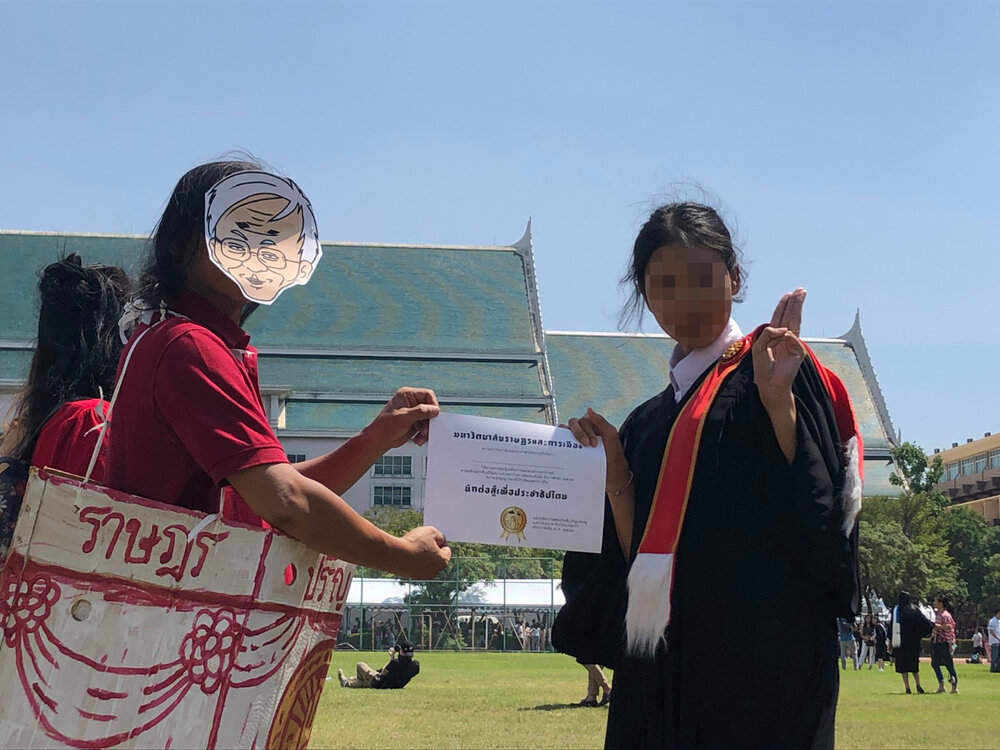 On 24 October 2020, Free Arts, a network of young art activists in Thailand, handed over 112 diplomas to “fighters of democracy” at the rehearsal of Thammasat University’s graduation ceremony. Those who wished to be granted the certificates had to show proof of participation in the protests, which for the first time in decades, have been calling openly for reform to the monarchy. The night before, King Maha Vajiralongkorn (King Rama X) praised a royalist who had held up a royal portrait at the protest site, Central Plaza Pinklao Department Store in Bangkok, on 20 October. Queen Suthida remembered the man (what a coincidence!), Thitiwat Tanagaroon, who was sitting among other royalists near the Grand Palace to welcome the royal family. She informed the king that he was the man in the clip. “Very brave, very brave, very good, thank you,” the king said.

It is remarkable that the royal portrait Thitiwat showed was a picture of the late King Bhumibol (King Rama IX) and Queen Dowager Sirikit. “A picture is worth a thousand words” may sound cliché but these two images encapsulate a generational and ideological clash in Thailand. The first picture indicates a nostalgic sentiment of the Thai royalists, clinging to the memory of the beloved King Bhumibol (and how much the monarchy institution relies on one person, who, unfortunately, has already passed away). The latter picture is a graduate in an academic gown receiving a diploma from the hands of a member of Free Arts, who was wearing a mask of Somsak Jeemteerasakul. A former lecturer of history of Thammasat University and a prominent critic of the monarchy, he has lived as a self-imposed exile in France since the 2014 coup d’état. This condenses the spirit of the current protests: youthfulness, humor, satire, creativity, and anti-establishment.

“Free Arts” activity at Thammasat University is thus a direct challenge against the formal graduation ceremony presided by the king and queen, which would take place on 30 and 31 October. The number 112 refers to Section 112 of the Thai Criminal Code or lèse majesté: “Whoever defames, insults or threatens the King, the Queen, the Heir-apparent or the Regent, shall be punished with imprisonment of three to fifteen years.” Wearing the Somsak mask says it all.

For months now, tens of thousands of protesters have gathered and sometimes marched, on the streets of Bangkok and other provinces all over the country. The protesters demand the resignation of General Prayuth Chan-cha’s government, a new constitution, and a reform to the monarchy. I

n this circumstance, definitely, the same old question arises: “what role can art play in politics?” In a time of political crisis, in what ways can artists be politically engaged?

The current situation differs strikingly from the past when most Thai artists, particularly the notable figures of the 90s, stayed silent on political causes (2010) or worse, supported the military intervention into politics (2014). Politics has become the most popular subject for Thai artists, particularly for the younger generation. There have been political artworks and exhibitions in galleries, outdoor events, protest sites, and online platforms. 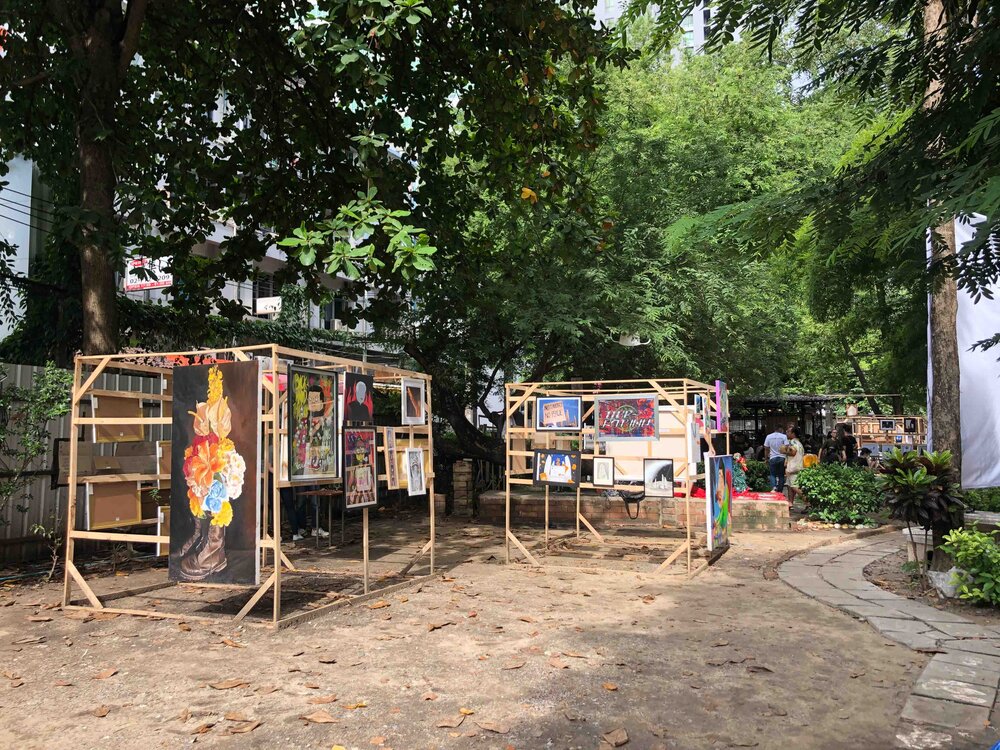 Although I see more artists responding to the decade-long political conflict as a good sign, I don’t think it is necessary for everyone to create political artworks or organize art-related activities, unless one is already “known as” a political artist or artist-activist. There is more than one way to engage with politics. One could continue making video installations about morning fog and act as an active citizen by joining the protests or donating some money. Artists may not be at the frontline but they could stand together with other protesters. The protest has become something of a “leaderless movement”, except for key protest figures who have continuously been arrested.

On 13 August, a group of artists and cultural workers under the name ‘Arts and Culture Network for Democracy’ published a statement in support of the protests, which currently has more than 1,000 signatures. This support for the protests seems wonderful but the road to democracy is long and winding. After several months of protests, many artists have been threatened by the government, and some were arrested or were followed by officers. The list is long but I can give a few names: graffiti artist Headache Stencil was stalked by plainclothes police officers in June; Rap Against Dictatorship (RAD) artist Dechathorn Bamrungmuang (aka Hockey/Hockhacker) and Pratchayaa Surakamchonrot (a.k.a Jacoboi) were accused of several offenses in August; singer Chaiamorn Kaewwiboonpan (a.k.a Ammy The Bottom Blues) and morlam singer Patiwat Saraiyaem (a.k.a Morlam Bank) were arrested for various offenses in October; and Elia Fofi, a member of Free Arts, was arrested for violating the emergency decree. At the time of writing (26 October 2020), only Patiwat is still imprisoned. Patiwat was previously charged with lèse majesté and jailed between 2014 and 2016 because of the 2013 stage play ‘Wolf Bride’. #artisnotacrime, or so the hashtag goes.

The political awakening has led to criticism of the authoritarian structure of the Thai art world too. Art schools, universities, institutions, SOTUS culture, the marketing system, sponsorship, and state policies for the arts have been questioned, especially by the young ones. The Bangkok Art and Culture Centre (BACC) has become both a site for protests (the space in front of the building) and a target of criticism. The latest one concerns the incident on 16 October when police fired water cannons to disperse thousands of protesters at the Pathumwan intersection where the BACC is located. On 21 October, 25 participating artists of the Bangkok Art Biennale 2020 (BAB2020) released a public statement to call for the Biennale and the BACC, one of their key venues, to stand with them against the state’s violence and support the protestors. 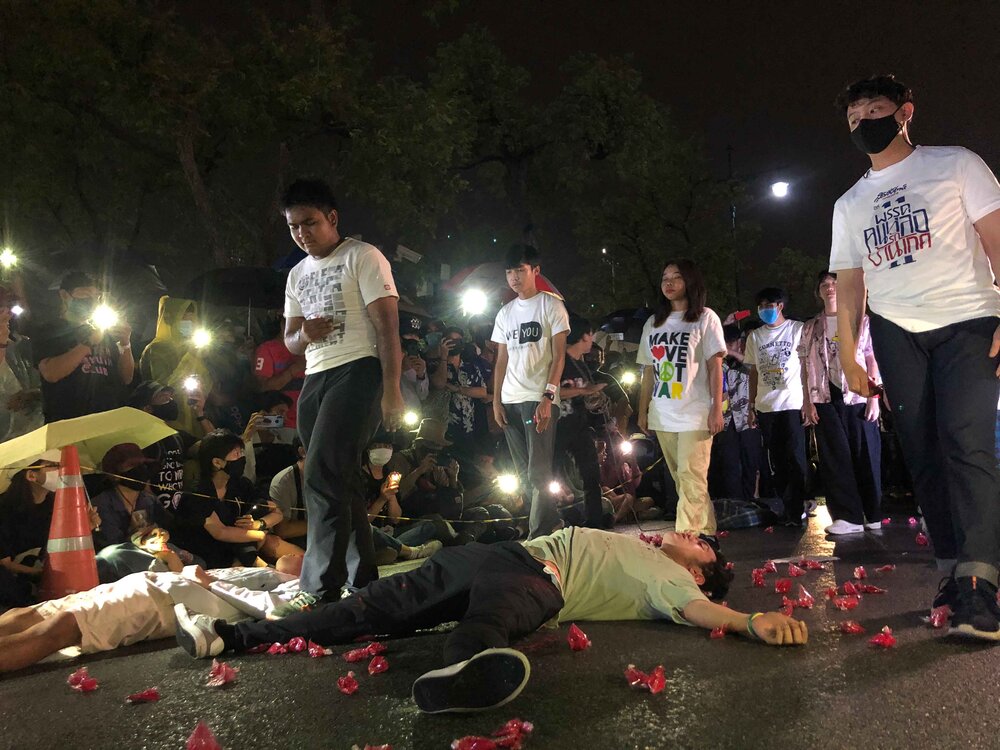 Apinan Poshyananda, Chief Executive and Artistic Director of the Biennale created the theme ‘Escape Routes’ for the 2nd edition of the Bangkok Art Biennale. Artists were invited to “find escape routes by reflecting on issues such as environmental detriment, pollution, social malaise, gender, diaspora, inclusivity, and political differences”. A section of the Biennale statement describes the situation we are in:

“Trapped together in our own mess, we blame one another and search for a way out. Inescapably entwined, we are entangled with others even when we cannot track or directly perceive this entanglement. A culture of fear has driven us to be afraid of our enemies who were once our friends, relatives, and neighbors.”

It has never been more true that the clash of political ideologies has deeply divided families and friends, leaving all of us wounded. Many of my students quarreled with their parents because they participated in the protests. “Political differences” are the main causes of the “mess” here. The 25 artists responded so well to the theme, only it wasn’t through their artworks but a public statement. They even called for the organizer to support the protests. Yet, I am afraid that this would be like talking to a wall. The Biennale would remain in silence, or maybe worse, take advantage of the situation to mark itself in history: “BAB2020 creates controversy amidst Bangkok political turmoil”. Anything could be seized, anything could be a PR opportunity, and bad publicity is publicity anyway…

Whether signing a public statement is just virtue signaling is up for question. However, I won’t expect too much from international artists who live far away (17 of the 25 are foreign artists). My doubt actually goes to the public statement by the Arts and Culture Network for Democracy mentioned earlier. Among the more than 1,000 signatures, I saw some names that I remembered from 2014, names of those who had supported the anti-election movement: The People’s Democratic Reform Committee (PDRC). I also saw that a senior photographic artist who had previously supported the PDRC took a seat as “artist representative” in the seminar about the new constitution at the 14 October 73 Memorial last August, preaching about democracy, equality, and freedom.

Shouldn’t I be happy seeing these senior artists taking an ideological turn? Unfortunately, it is not that simple. Without admitting how their past actions contributed to the 2014 coup d’état, this is just whitewash. This has to do with accountability. I am well aware of our culture of impunity: the higher the status you have, the higher the level of impunity you have. Indeed, my sincere respect goes to rock singer Sukanya Migael who has delivered a public apology about being part of the PDRC movement and participated in the protests. Admitting mistakes and taking responsibility for past actions require courage. I have not seen this from any senior visual artists. I do not name them here, but I will surely do so on a more appropriate occasion. I am an art historian and my archival impulse keeps ringing.

This text was originally published on Art & Market on October 28, 2020