Report of the First International Encounter of Objects without People

Very many thanks to all our companions
Thank you, Daniel, Alí, Juan

Nota
Dear reader. Before reading this text, look at the objects that you have around you at the moment. Name them mentally or aloud.

Political History of the Objects

Last summer, 25 people undertook a collective investigation about objects. Within the framework of the Templo de Estudios Subcríticos (Temple of Sub-Critical Studies) by Biquini Wax in Mexico City, an open call was launched to the reading and study circle Historia(s) política(s) de los objetos (Political History of the Objects). In this, we sought to displace the notion of individuality and the idea of personal authorship in order to encourage conversation and dialogue overall. Based on our discussions, Diana Cantarey—a participant of the circle—developed a manifesto in which the objects expressed themselves. Some of the points are:

I. The objects talk.

II. The objects provoke emotions and inflections, agreements and disagreements, reunions and separations.

VI. The aspirations and failures are framed by objects

VII. The objects of the hegemonic class condemn us to everything else

VIII. The objects are also our histories

Thanks to these and other hypotheses that we worked on over the nine Saturday sessions of reading and judgement, we planned the strategy whereby we would present the objects that we were studying, given that the only requirement to participate in the circle was to choose an object to reflect on. Daniel Aguilar Ruvalcaba, founder of Biquini Wax and a participant of the circle, proposed that the format created an environment in which the objects didn’t clash, nor had conflicts, and that rather, provided a space in which these came together.

The encounter happened on Saturday 1st September 2018. At that time, Biquini Wax had a house in the Buenos Aires neighbourhood, a complex zone of Mexico City due to the repercussions which it has had based on incidents of violence and which is known by its trading of car parts. This was the space for the study, encounter, and presentation of the objects.

Cultural agents of distinct fields participated: visual artists, curators, directors, philosophers, designers. We organised the presentations based on a collective format. We discussed the possible links that could be articulated regarding the objects which each person had chosen, and therefore, we set up five teams with five objects in each one and an hour for each participation, in the place of the house and format which each person chose.

For the encounter, the reference to the piece by Melquiades Herrera was essential. One of the lines of reflection in the work of Herrera—and one of the main areas of research of the collectives of Biquini Wax: Arte y trabajo (Art and Work) and Los Jacuzis, grupo de estudios subcríticos—is the change in the dynamics of consumption in Mexico following the Free Trade Agreement in 1994, and with that, the mechanisms through which neoliberal policies have changed our forms of understanding and relation with objects. In this way, we sought to destabilise what is generally understood by ‘object’ or ‘artistic object’, complicating the link of this with its social and historical context, its use, and its place. 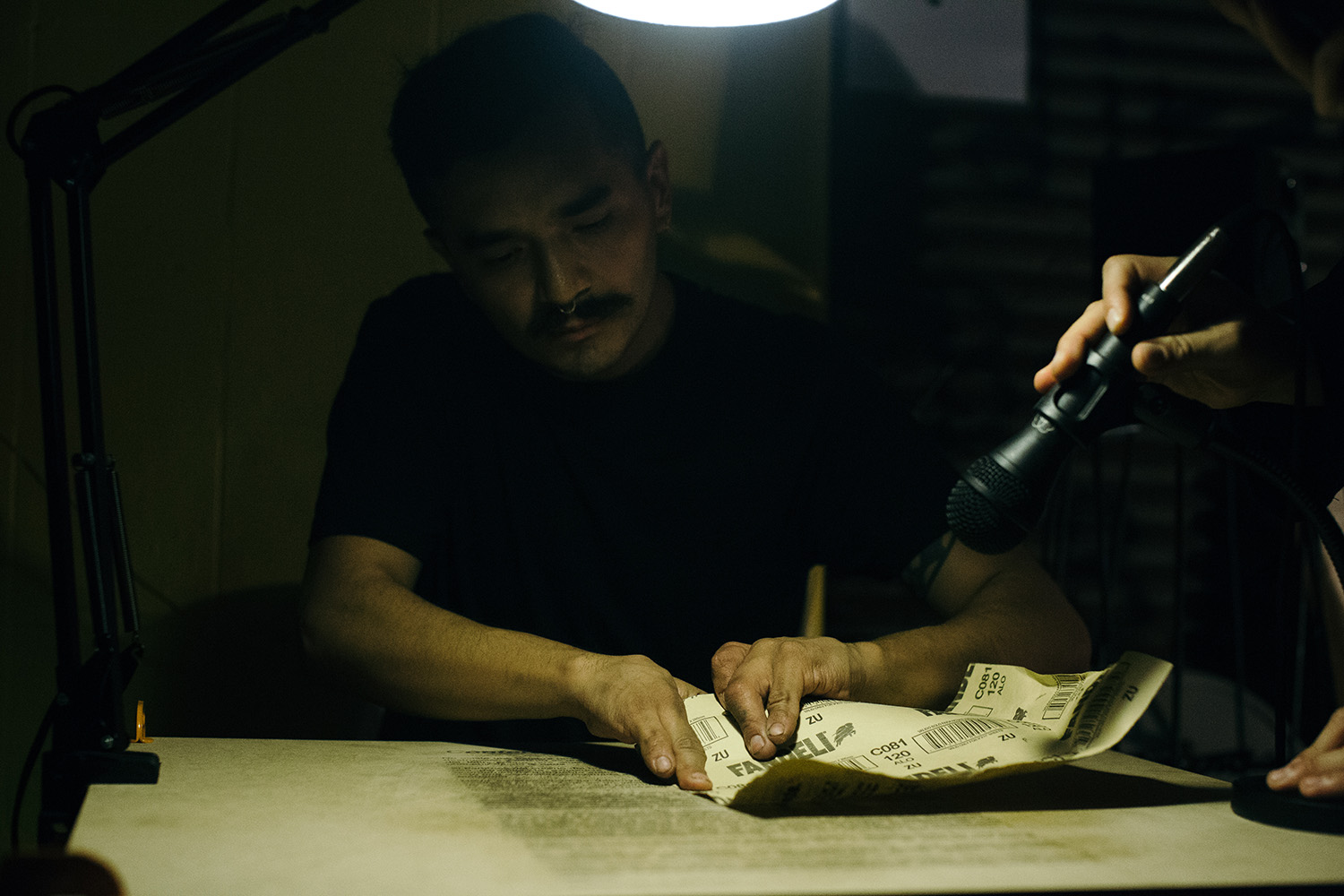 With the space and the objects ready, the day began. The first participation was made up of paper, sandpaper, IDs found, books, and masking tape. Through self-referential titles—El papel del papel (The paper of the paper), La lija de la lija (The sandpaper of the sandpaper), La identificación de las identificaciones (The ID of the IDs)—, historical roles and daily uses that these objects have had in our societies were emphasised, as well as the proximity that they have with people and the tyranny exerted on them. In a conference about wear and tear, one sandpaper sanded another, representing the tension and constant change that exists in the ties which are established between the past and the present. At the end, the book ran over the feet of the participants, due to the wheels and the remote control which were placed on it, highlighting with this act the agency that we have, as people, over the objects and the necessity of subverting and rethinking their uses. 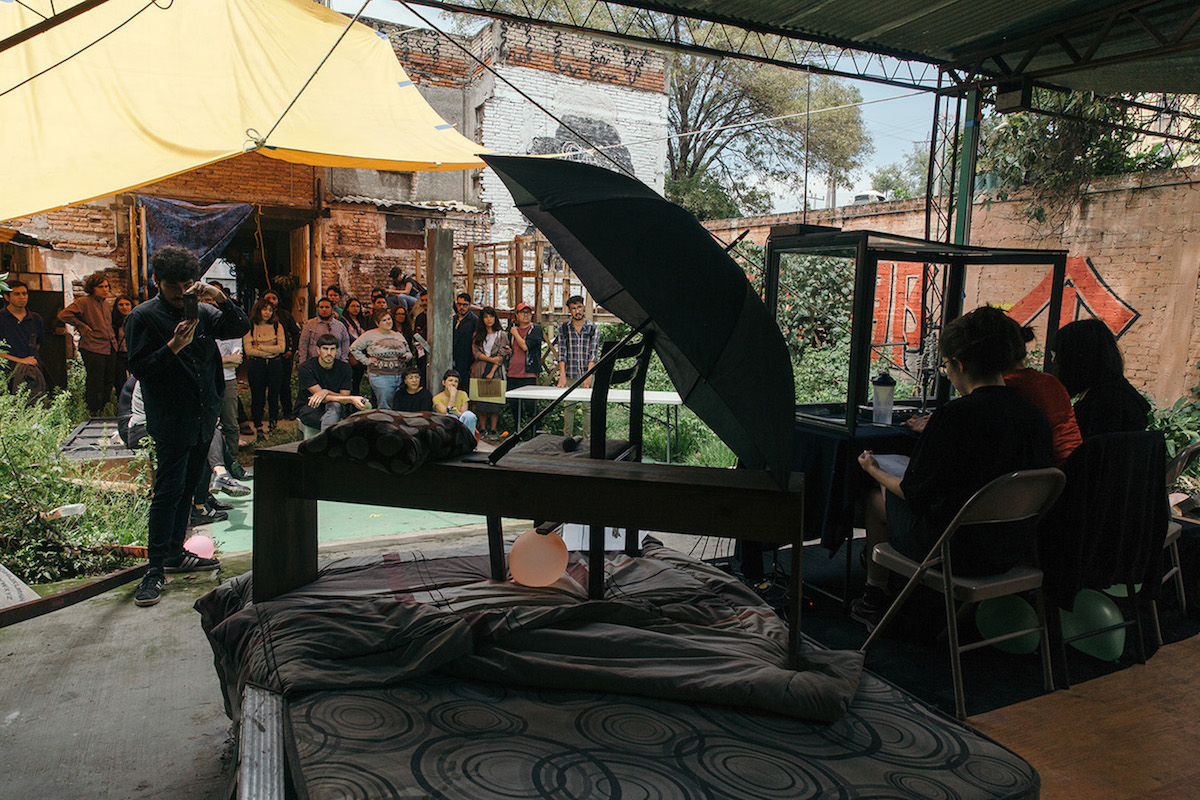 For the second presentation, a translation booth was installed and the participants listened to the language of the bed, the chair, the bench, the balloon and the umbrella through headphones. The act titled Cinco trasladosde lo público – privado – afuera – adentro (Five moves from the public – private – outside – inside) put in tension the form in which the objects become displaced and produce spaces around themselves based on their disposition and relations with the bodies that use them. History has changed the hierarchy of these objects and their materiality has made explicit the social difference that these promote. These objects took the form that they have today after the Industrial Revolution, and therefore they have civilizing features. 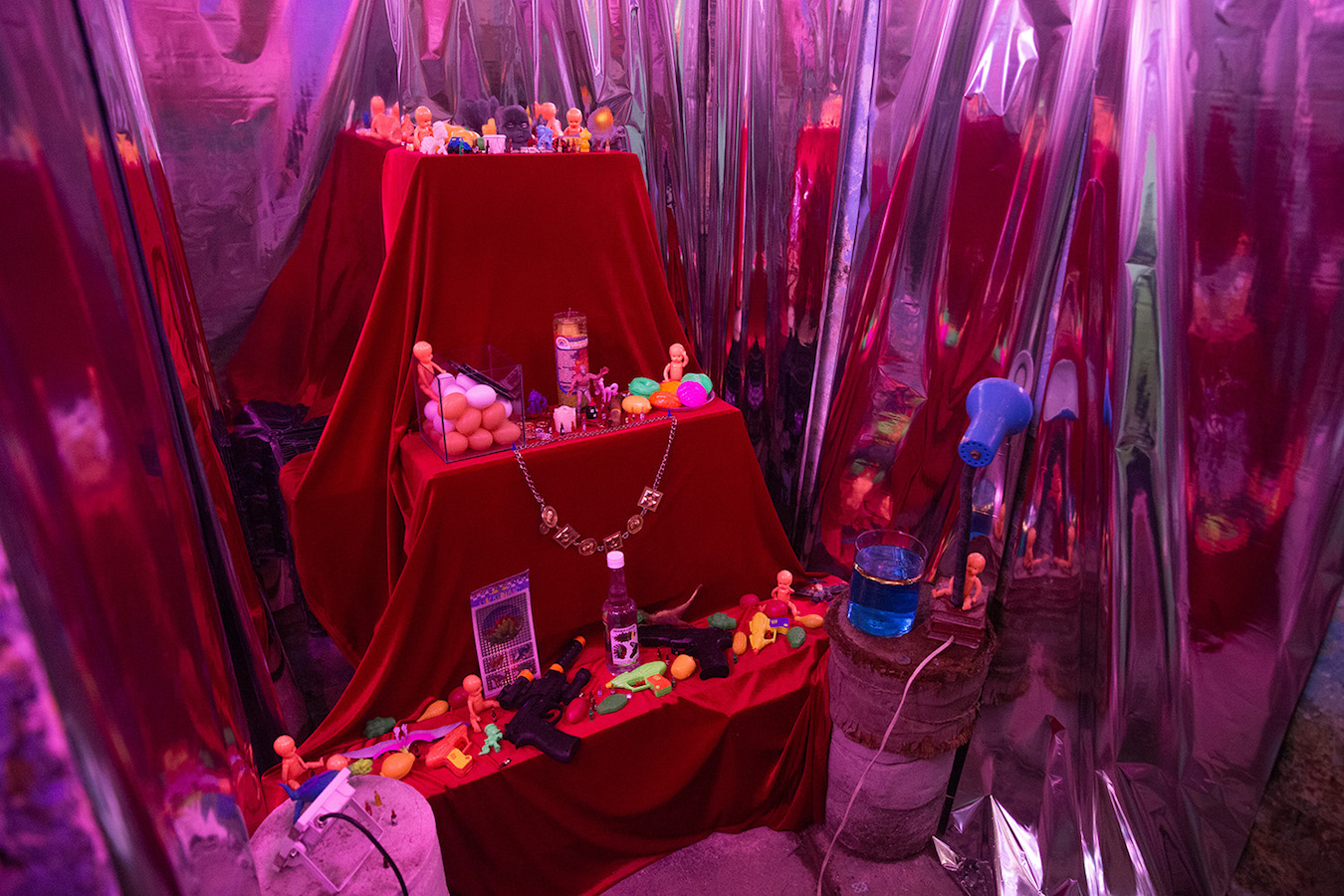 In a small space delimited by an arch, the first team carried out the mounting of the Altar of syncretic plastic. An elegua, a skull, a bread doll, a plastic dinosaur, a pistol with laser beams and a toy one, were placed on the altar along with other objects questioning the tension between their magic, ritual, and spiritual potential and their plastic materiality. These cult and toy objects have been rearticulated in the modern world, synthetizing believes that have multiple affiliations, origins, and ways of reinterpretation. A series of printings were circulated among the participants, which in the style of religious stamps represented the physical composition that each of the objects have. 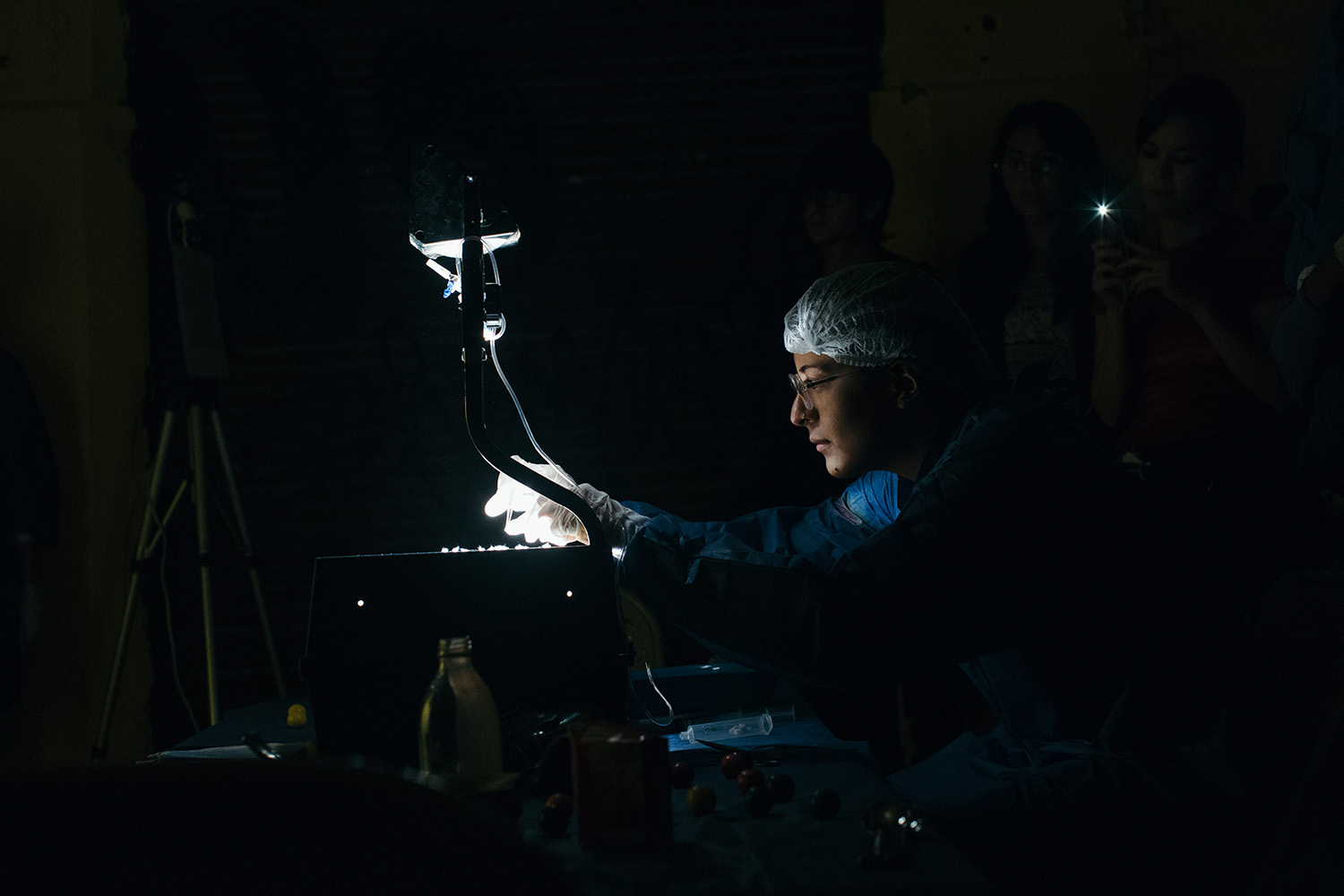 The syringe, the navel fluff, the gum, the spoon, and the light were presented in an operating theatre. In the closed space which set the stage, the lights turned off and the public remained in darkness. The light was illuminating the objects, and bit by bit, revealed their positions. The presenters manipulated the objects in order to show them in the light of another perspective. Their contradictory relationships with the body were made explicit: these small-scale objects accompany it, care for it, intervene in it and also undermine it. 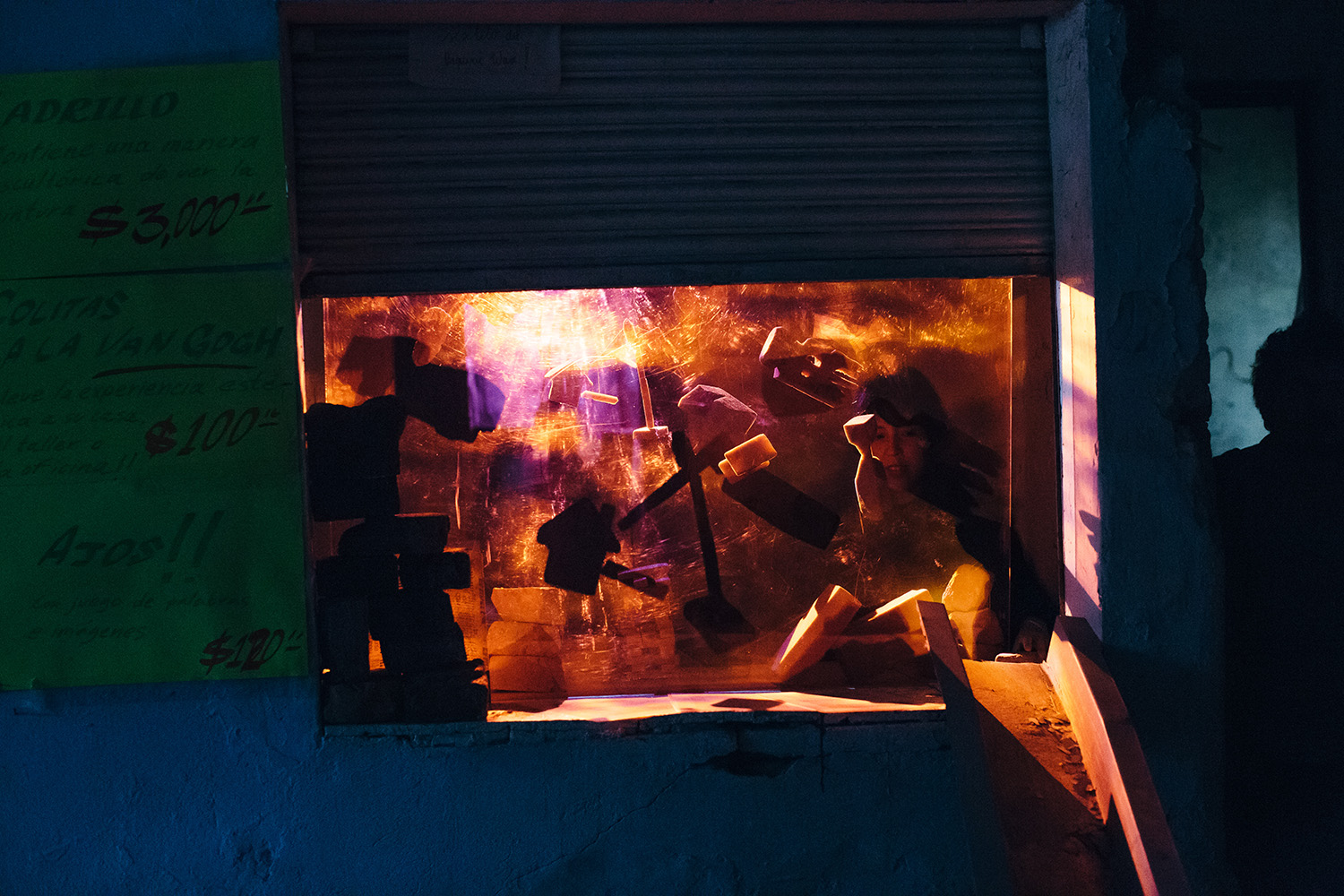 The stick, the concrete block, the mud block, the philosophical stone and the Tower of Azkaban, finished off the presentations. Through an enchantment of hardening, the objects were combined with fire and light, in order to make way for a new creation. All of them are linked to construction processes, by which they need one another in order to give way to distinct elements and structures. This alchemical preparation demonstrated how the buildings are traversed by symbolic and magical acts. Just as the philosophical stone has the capacity to change the substance of the things, the Primer Encuentro Internacional de Objetos sin personas distorted the way of looking that until then we had had towards the objects.

Dialogue with other latitudes

The meeting established a dialogue with other art scenes in Mexico: it was streamed in Deslave in Tijuana; in PAOS and Casa Vidrio in Guadalajara and in No- Automático in Monterrey. It also had an international dimension. Juan Laxegueborde and Lucía Ulanowsky were our partners given that by chance, on the same day, the first Salón de Arte Chico de Buenos Aires was presented. They observed simultaneously the objects and we made a space for a broadcast from Argentina. The Salón had the same format as our encounter: friends and colleagues gathered one Saturday afternoon to look at proposals and discuss approaches about the notions of artistic object assumed in our cultural circuits.

Lorenzo Sandoval and Benjamin Busch also welcomed us: they screened the presentations in the Institute for Endotic Research in Berlin, and they mounted a small altar to Melquiades Herrera. In Santiago de Chile Escuela C.A.P.A. (Crítica, Arte, Pensamiento y Acción) [Critic, Art, Thought and Action] received us thanks to the management of Lucy Quezada, getting together in a house with friends to see and discuss the broadcast.

In Bogotá, Maleza Proyectos also joined us: in the time between presentations, the participants carried out exercises of yoga for object. We spoke with Josseline Pinto, who mounted an exhibition in MANIFESTO-ESPACIO in Guatemala City, with the PDFs of the readers of the study circle, the rebroadcast of the encounter and the screening of videos by Melquiades Herrera. In Ecuador, the space Khora in Quito was also combined in order to achieve this Latin American approach. The simultaneous broadcasting developed ties with other independent spaces, in those that we found similarities in forms of work and reflection processes. 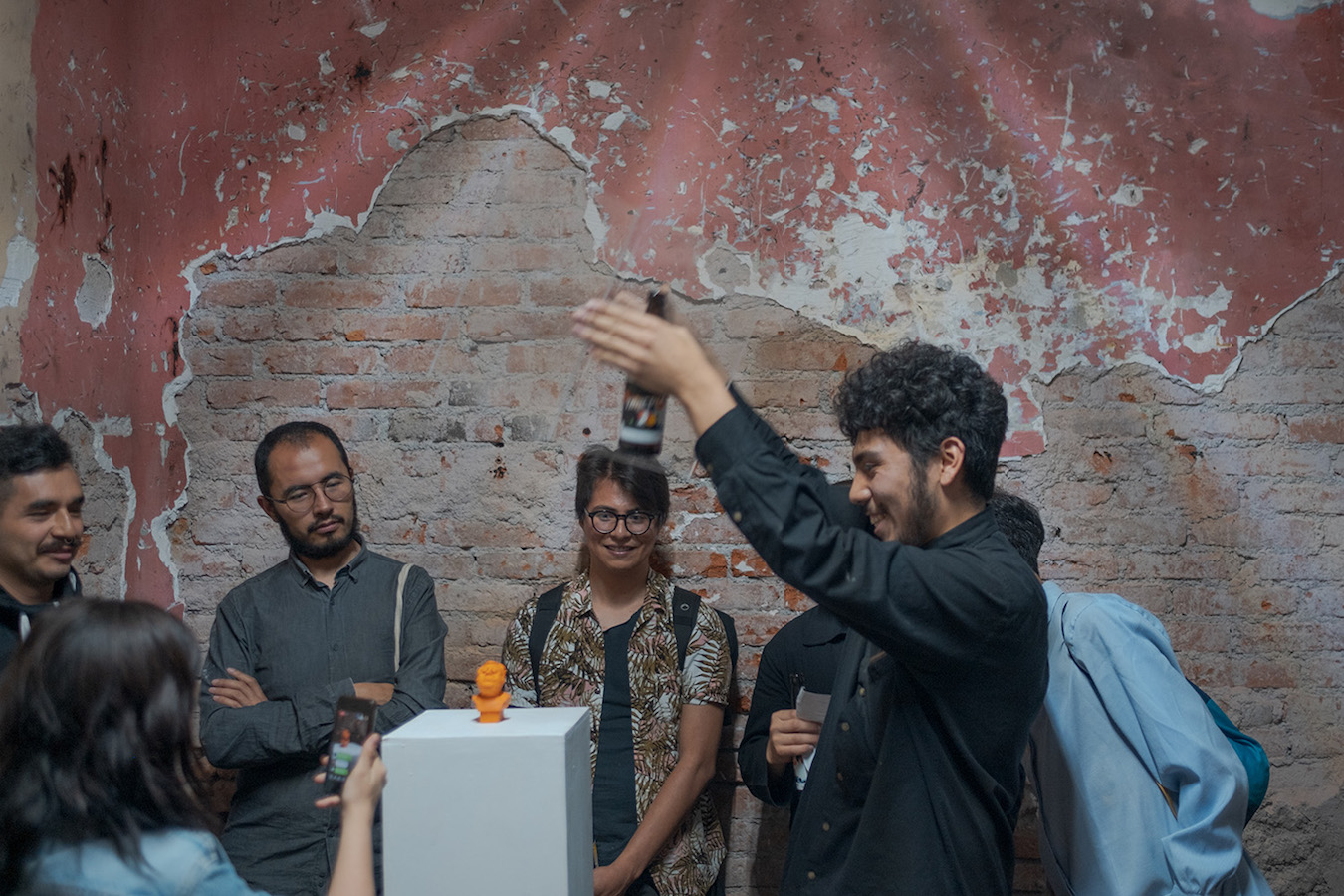 Melquiades Herrera was the teacher that guided us. Melquis es amor y arte (Melquis is love and art), sentences a painting on the wall in front of which Herrera posed for one of his many portraits. Herrera articulated a piece in which he randomly delivered slips of paper which read: The miniatures make me cry <3.

The encounter closed with the unveiling of the Minimento a Melquiades Herrera. Daniel Aguilar Ruvalcaba, Gerardo Contreras, Abraham González Pacheco, Alí Cotero and myself, we conceptualized together the Minimento, which took form in the hands of Gerardo Contreras. All the participants got together around a pedestal, covered by a black fabric that allowed us to sense a small object below it. After some words of introduction and thanks, the Minimento made with orange plasticine showed its greatness.

Melquiades is love because it made us pay attention to the small details to which before we were blind and deaf. We learnt from Herrera that based on observing with care the materiality of the objects and rewriting their histories, we could articulate new forms of relating with others in the world. To find ourselves with the objects led us to reflect on our place, on our roles that we assume in relation with others and with the situations to which we are faced. And just as the objects complement functions within themselves, we resolved and learnt forms of mutual assistance and collaboration.

Note
Dear reader. After reading this text, look at the objects that you have around you at the moment. Name them mentally or aloud.