Her Forms of Other, the solo exhibition by Carmen Argote presented at Commonwealth and Council features new works from an ongoing series called Mother which explore sculpture forms, memories of her past, meditativeness and ritual. Argote’s practice delves into her own psychic landscape, her own body, her trauma and her inner child as a means of healing, creating and reconciling with the world. She makes protectors and comforting objects—sculptures which become alive as they are formed through actions, symbols, gestures and entangled or embodied through her psychological processes. Her rituals, art and processes ultimately reflect and entangle with her emotional or spiritual states.

Helena Lugo:  Can you explain about your processes for this particular exhibition? All the “objects” seem to have been through a long process of creation –they include painting, found objects, plants, fruits, clothes and most elements are braided, intertwined and entangled. Can you explain this further? 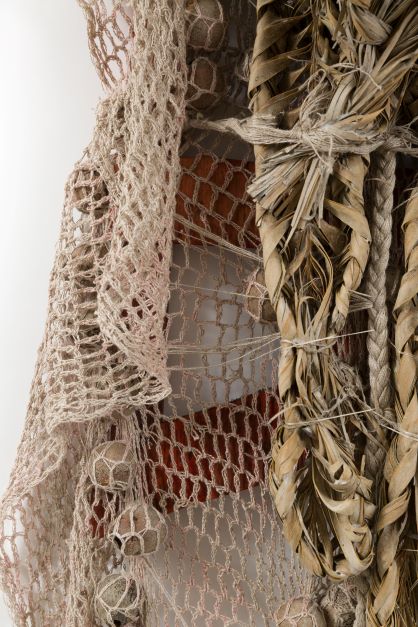 Carmen Argote: This body of work is part of a larger series I call Mother and has undergone various stages of development that parallel my own psychological exploration. The act of braiding became a symbolic action of corporal integration with mind and spirit bringing forth a collective presence that was called for in the Art. The art making process combines art-making, therapy, walking playfully (galumphing), and mindful research that allows for gathered materials, forms and shapes, and a visual language to develop into an ongoing conversation. This work has nourished my spiritual connection with a less ego-centered reality.

HL: You often talk about objects and its generosity, as something you acknowledge or engage in a conversation with; as depositories or custodians. Could you please delve into your relationship with objects and matter?

CA: One day I was holding a soft pillow and felt humbled and surprised by how this non-living object could revive my memory of a younger child version of me that needed soothing. This moment catalyzed an awareness that deeply illustrated no demarcations between my Self and the object. The space and emotions the object holds is generous and giving, these feelings and the process in psychological explorations inspired the specific action in the making of the comforting objects and protectors.

HL: For this exhibition you created two types of beings; comforting objects and protectors. Can you tell us more about them? What comfort do they provide? What is it that they protect? 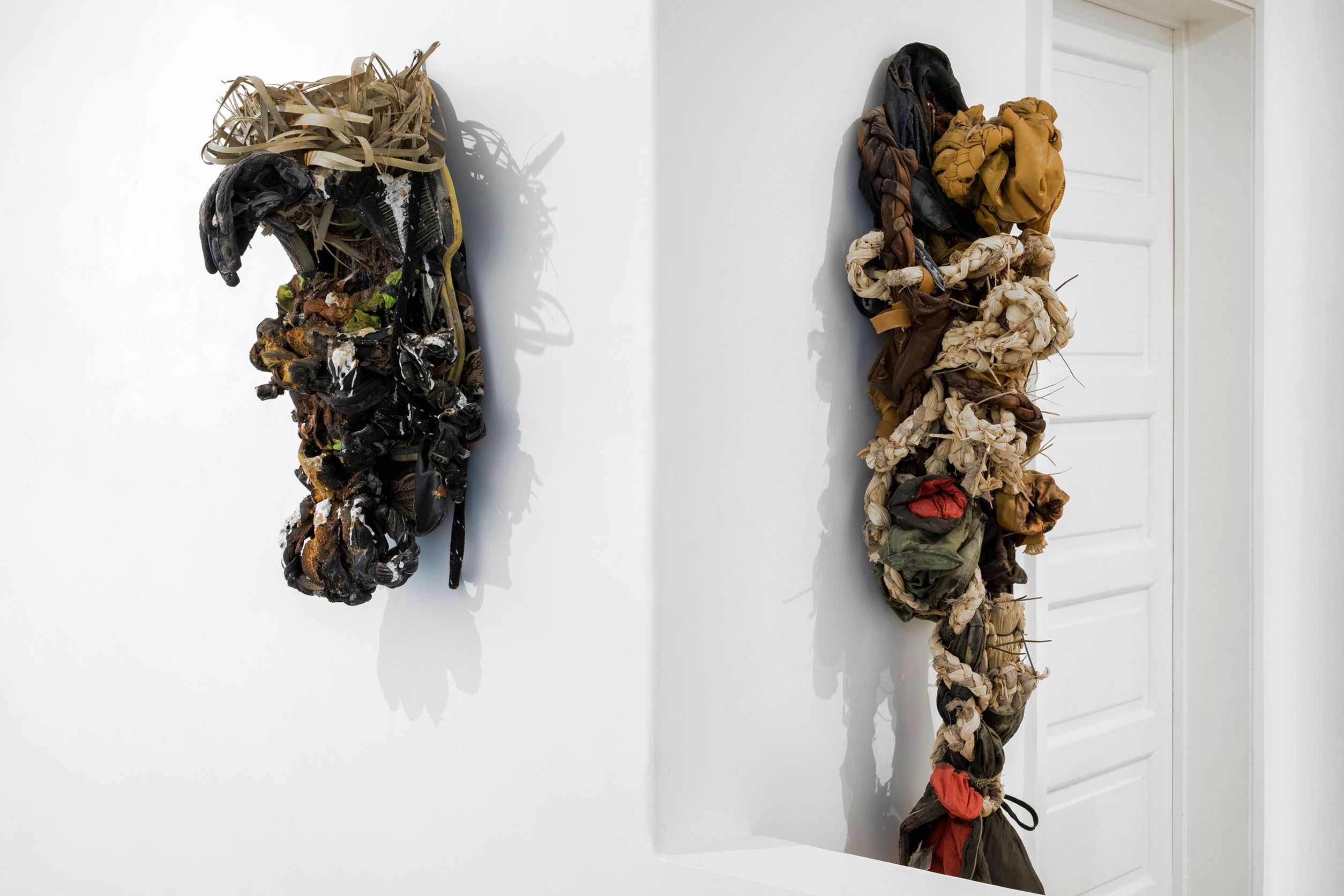 CA: The comforting objects, like the protectors, are stages of development within the larger series I call Mother. Within Mother, there are archetypes, pain bodies, protectors, comforting objects, and shadows. The protectors have taken certain hand positions reminiscent of my hand positions when walking. The hands seem to indicate an allowing of an energy of surrender (not a giving up, but an allowing things to be as they are) sometimes the hands push away, and create a sort of boundary. I think of the protectors as patterns of behavior that rise to consciousness and are being let go of. Perhaps these protectors were belief systems that kept me safe at some point  and  no longer contributed to a life of wellbeing.

HL: Can you tell us who this Other is that you refer to and how you understand otherness?

CA: The idea of Other, comes from the early stages within the body of work where I was doing rubbings of gravestones that said Mother. As I was rubbing the tombstones, I started to deconstruct MOTHER, OTHER, and HER. It became a question, who is HER? Who is OTHER. HER felt distant from Mother, OTHER in this context reminds me of other versions of my Self, it became another question posed to myself that opened up possibilities. What if I allowed my repressions to become conscious and to lessen, who would be this other me, would I be my mother, her? Or would I be the other me that I was protecting all this time and keeping safe unbeknown to me with all these Protectors. 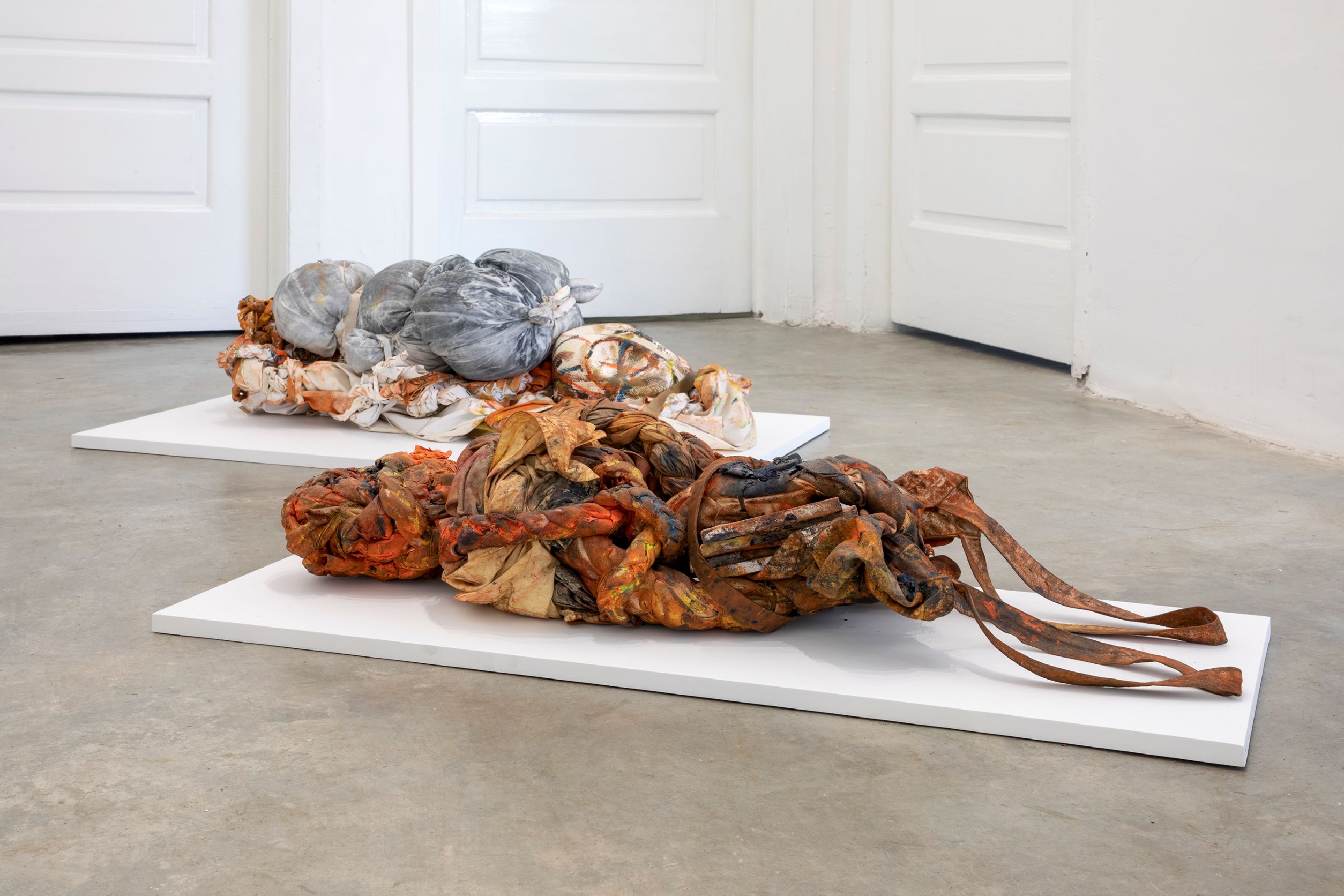 HL: You use materials full of symbols ––can you expand on these? I’m referring to the meanings in the flowers you used, the wasp nests that drop from the trees, the clothes of your mother, the symbols that evoke your relationship with your father?

CA: The materials seen in the works connect to the objects and remnants of memories in my life. The foraging of materials happens in relation to the site, be it in walking, in my home studio, or at the site of the art making. The actions of forage, salvage, and spatial exploration are corporal and digest within the art making process. It feels akin to consumption, sometimes of my own personal belongings and other times of the symbolic belongings of someone else. These materials are transformed into new forms with a different symbolic meaning. It is in playing with these materials, in the art making process, that the symbolic function of the materials can be articulated. The use of a material is often an instinctual impulse and only after the art making process has happened can I ask the art why it is the way it is, and what it is trying to symbolize. It is here that the symbolic can be put into language. It is then that I can take in what the Art knew and then continue the conversation with it. I’m often surprised to find out that for example, the oak galls that I felt compelled to gather, to boil, and to use are the immune response of a tree. I often feel compelled to sprinkle iron powder on a work as I’m finishing it thinking more about the reaction as alchemy, only to make the connection to iron and blood. Then the action of using iron becomes about giving the object a kind of life-blood. Another example is when noticing a lot of jackets given to me by my mother that I no longer wear, in this distance I was able to see them as a material full of intent and weight by the relationship between my mother and I. Motorcycle gear from a past artwork, now with time, becomes representative of a certain stage in my relationship with my father. The material takes on a symbolic meaning that in this case, feeds an impulse to resolve what could not be done at an earlier time. In this way, the materials parallel my human development and their symbolic content comes to be through their remaking, re-mothering, and transformation. 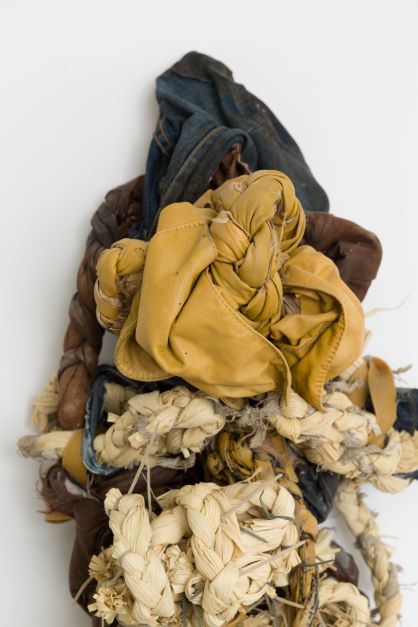 HL: I believe your practice can be understood more as a performance than as a final object or action; since many processes are involved, and the objects are charged with meaning. Can you delve into this performatic experience?

CA: The art is illustrating what a process-based practice is. In this particular body of work each of the objects, works on paper, paintings, and unweaving were made by doing an action. Usually these private actions are embodied conversations that occur through the art making process with a spiritual presence I call The Art. For me, an action in this context is a conversation with a collective unconscious, a shared knowing both human and non-human. Recently, I have opened up this private space within me and have begun to go into these actions in public, where the action involves the live making of the work. The actions seem to put into practice what has been nurtured within both my artistic practice and psychological explorations. The stages of development of a human being and the stages within the development of a body of work have a symbiotic relationship. I do not use the term performance or performative because of the way that I think about the public. I do not think of the audience, a public that is tethered to an expectation of staying and watching for a specified duration- from start to finish. I think of the public as witnesses that can come and go, stay or leave, and that what is felt is the connection between the making, my Self, my psychological leavings, and the Art. The generosity of objects is that they hold the actions for me and lessen what I carry within, they mentor me, they provide in their materiality and in the process of their making.

HL: Being a Mexican that has lived most of her life in the States ––do you feel there’s a particular Latin American identity in this body of work?

CA: What I feel is the collectively sensed virus of late capitalism that leads to an incessant disembodiment, an equating of one’s self worth to their accomplishments and what they can produce. What is felt is the objectification of the human being as an expendable, exploitable resource to be used for profit. I wish to recenter myself and my intention for living in a way that prioritizes my well being and nurtures compassion for humanity. As a Latinx person who is also an immigrant, I am conscious of the wounds of generational trauma and through re-parenting my inner child I see the possibilities of our collective humanity. 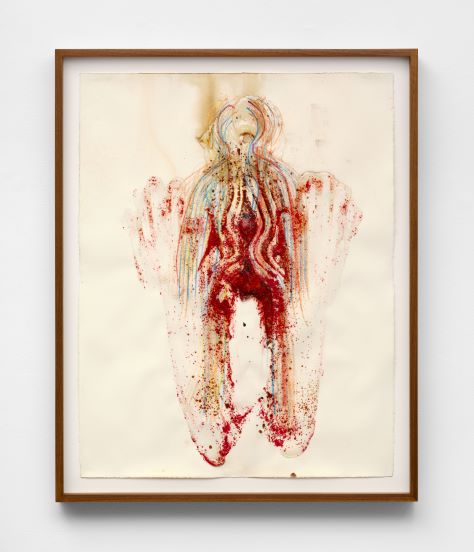 HL: Finally, can you tell us what’s next in this process of transformation of the Self? Can we expect some new body of work around these same reflections?

CA: At the moment, my focus is on holding the space needed to keep the integrity of the body of work whole, regardless if the individual works disperse. The body of work I call MOTHER is still not entirely resolved and I see it coming together in its next transformation into the RIPE CHILD.