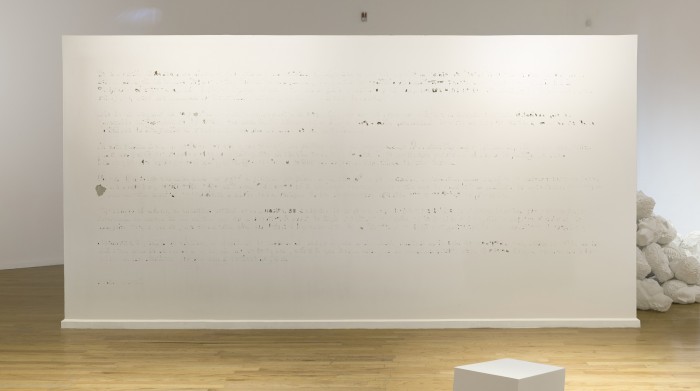 First there is a calculation. There is a wall that divides the entrance and obligates you to choose one of two possible directions. One way is partially blocked by a pile of almost identical heads. Almost, because although they are plaster reproductions from the same model, each has unique coloration: they are inclined in their own direction, one on top of the other, collapsing. Each one has particular scrapes and cracks, the majority of them invisible at first glance but present like fingerprints. Others, from what one understands to be the collapse and the force of gravity, have suffered blows that left fissures and holes. They also share the scars of the model: they are all missing a small piece of the cheek and the neck is torn up, for example. The model turns out to be the head of Hera, the mother goddess, in marble.  The heads stacked against the wall limit the entrance and block the passage in one of the possible directions so you have to navigate around them.

On the other side, the way seams free and the fist thing you discover is a hole in the wall. You have to lean a little to discover a perforation measuring about a centimeter in diameter that traverses the wall. There was force: the wall broke apart. Then a delicate operation: measure, record. The small tunnel shows that the angle and the location were carefully calculated. It is a peephole that points to an object: the tallest part of a monument. It turns out to be the Madre Patria (motherland) monument, standing and seen from behind. A circle frames her with precision. The opening would allow a perfect shot at her head. If the shot came from outside and we were standing on the same spot, it could hit someone in the heart, lungs, stomach or throat depending on their height. A hole is a guarantee but also a threat: the wall’s security has been breached and there are inversions. Landslides can reveal a trench. Exterior light blinds you when you turn back to look inward. 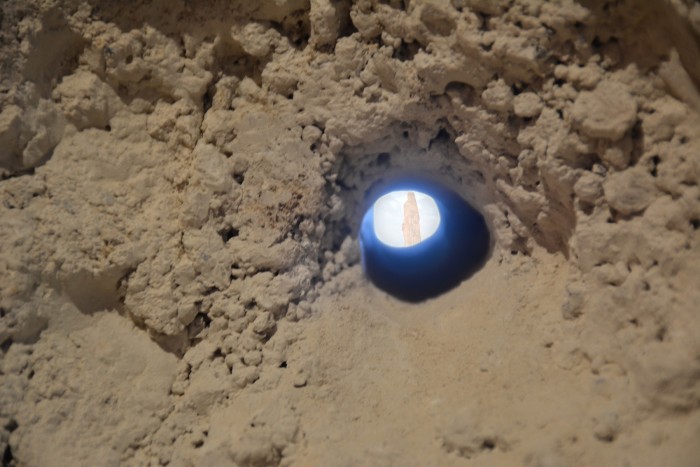 Adjusting the pupil, like in a cavern, four mysterious cocoons are distinguishable against the wall. They are frames: their silhouettes are recognizable. They are pressed against the wall, covered with strips of manually cut tape of different lengths, stacked one on another until each frame and its image is almost completely hidden. Almost, because the strips cover everything but leave a small hole in between in the shape of a parallelogram that allows for a glimpse. A little of the texture, colors and gestures are distinguishable—what could be a landscape, something that could be a wing. The frames turn out to be paintings unraveled from the collection that contains them. Three of them are signed by masculine names. The other is signed with a feminine name that attests to its inclusion in a masculine one. None of this is visible, but it’s proven to be true. The larvae stay immobile while the metamorphosis takes place.

To continue you must turn, as the wall indicates. A little further on, you catch a glimpse of a trace of irregular fragments. Around the corner you discover another passage.

In the middle there’s a labyrinth of volumetric polygons of diverse heights.  The tallest are inclined at angles that couldn’t withstand gravity if they didn’t have a good part underground or a counterweight. The smallest seem to have been detached from the largest. Or so it seems, because they recall the ruins of a civilization that was important. They recall the way that time has a way of making structures fall that were once firm, erect, solid and tall. The form of time, or the force, any force. Gravity. It seems that way, looking from above and far away, now, containing a sigh, resisting, but not for long. 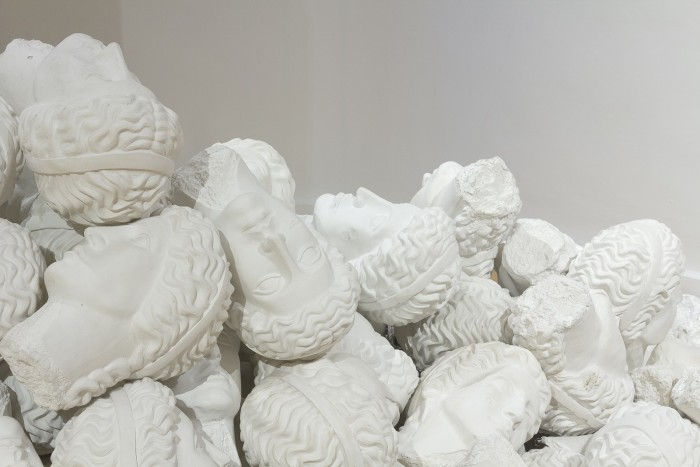 So you arrive to the trace of fragments. There are 130 of them and they turn out to be bronze. They are fixed to the wall following a horizontal line that breaks at a corner and continues. They belong to the same figure. They’re pieces from an effigy of a flying eagle: feathers, talons, eyes, beak, crest. Remnants that, from their disposition, seem like they were left to indicate a straight path, yet they obligate you to take a turn. The eagle is Zeus, the father, husband of Hera, the same at the feet of Madre Patria, on top of the children who died for her, the same that has been converted into shards trying to go in a straight line, unable to avoid the turn. The dismembered flight is the fall. Suspense: a crossbow.

Turning the corner takes you to a frame that seems to reflect the peephole along with the entrance. It seems like the fingerprint of the hole that traverses the wall. In the middle there is a dark marking about one centimeter in diameter, but the porous marks turn out to be the contours of the 130 fragments of the bird. With a 180-degree turn on their axis, the observer proves the similarity with the peephole. A turn of 45-degrees to the right is the direction of the bronze remnants. The fragments form a new map. They are looked over. They are outlined. Then the maps have something in common, the peephole and the pit. They are a mirror, reconstruction. There isn’t a perforation but there was a shot and a death. It is the retelling of wounds, the remnants at the scene of the crime. The Nebulas are the remains of dead stars. The Nebulas reconstruct the dismemberment.

The wall continues to the left, turns again and continues. Its whiteness is discreetly interrupted by yellow rectangles that turn out to be bits of paper aged with the remnants of adhesive and nothing of what was glued to the wall. Whatever it was, it was important, selected, protected. But we know that conservation has its limits and substances expire. Nebulas. The residues are testimony to the loss of adhesive power, which is inevitable with time, or any force stronger than the glue—gravity, history or patria. New scars that are new stories. Remains that can be rewritten. You have to pull of the scabs from the scar; the anterior tissue must be removed.

Before leaving, the block-wall that limits the entrance reveals other marks, which, in drawing closer, are distinguishable as letters that form words and phrases there, stuck on and then pulled off, leaving the imprint of their outlines and contours. From a certain angle its possible to recognize some of the letters, to try to reconstruct the words and string them together. Not all of them: some of the borders were erased, mixed with the scars of a violent tearing. The text, as it is, is almost indecipherable. The text turns out to be paraphrases of the damage. It reads like a smudged fingerprint. Damage turns out to be the glue that remains and from which the possibility of rewriting is detached. The text is now canvas.

At the end, the collapse of Hera’s heads interferes with the exit. A false mother who didn’t wrote her story. Hera used to be someone else before. A goddess transformed by the destruction of her history. Far away, blurry, scratched, ruined. Rewritten. This Hera is someone else.