Can a possibility for the future arise from the same device that enforces an act of domination? 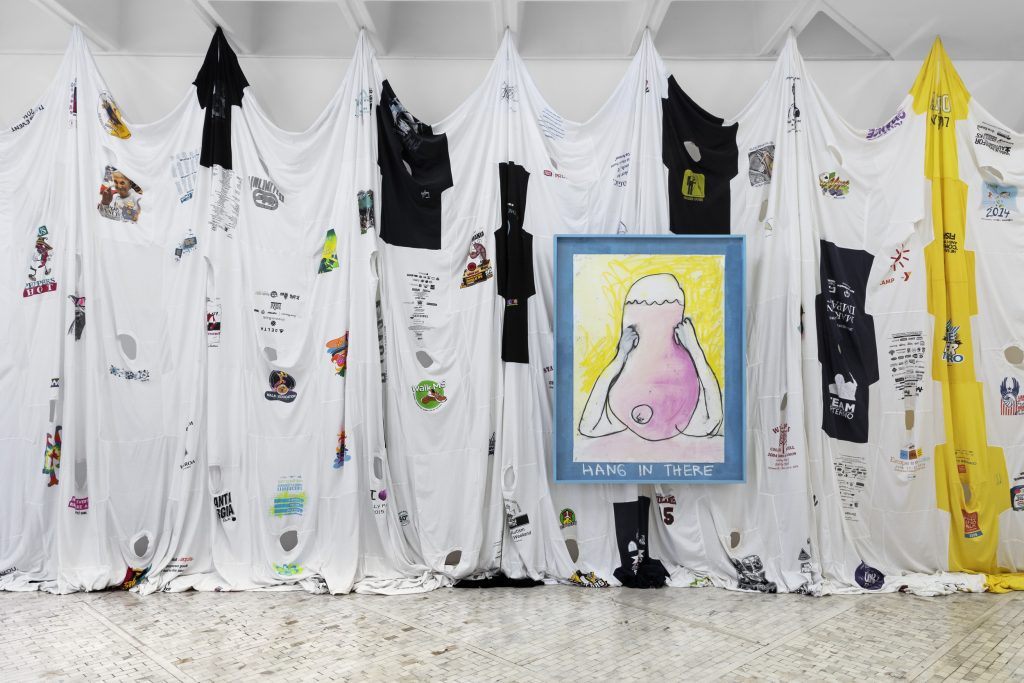 After a decade of careful and unorthodox planning by the famed Oaxacan painter and his wife Olga, the Rufino Tamayo Museum was inaugurated in 1981 in Mexico City. The purpose of the precinct was to build up a contemporary art collection that began with a representative selection of pieces from the “international” art scene.[1] During this process, the couple had the support of museographer Fernando Gamboa, who eventually left his position at the Museum of Modern Art to direct the new space right across the street. As James Oles explains, with this project Tamayo carried the torch of an important tradition of national art, in which after a series of negotiations with the State, private collections were ceded for the construction of a personal museum.[2] Diego Rivera and David Alfaro Siqueiros had already done so.[3] However, being well aware of a new stage in the forms of organization of culture, the Oaxacan artist challenged nationalist expectations and total control of the public sphere by the State to, instead, adapt to the developing neoliberal policies.[4] In other words, this example serves to pinpoint the transition and consolidation of the museum programs of the period, which relinquished the single state model in order to establish direct connections with the private sector. Before becoming public, the museum was constituted with private investment through the sponsorship of the companies Grupo Alfa and Televisa. This triangulation between the artistic scene, the State, and private business would not last long due to the discrepancies between Olga and Rufino’s ideals and the corporate interests of Emilio Azcárraga, owner and director of Grupo Televisa.[5] Thus, in September 1986 the building joined the list of museums under the jurisdiction of the Instituto Nacional de Bellas Artes [National Institute of Fine Arts] or INBA, according to its acronym in Spanish. Still, the museum continued to in close correspondence with the private sphere. That is to say, the case of the Rufino Tamayo Museum, now Museo Tamayo Arte Contemporáneo, is an accurate reflection of the transition and consolidation of the museum programs of the period.[6]

Recently, within the cultural action plan of the current government, the public park surrounding the museum, Bosque de Chapultepec, is entering a stage of extensive reorganization.[7] In view of this, we believe it is necessary to look to this specific case in order to understand certain updates in the forms cultural policies are being negotiated as of late.[8] With the complex situation that cultural institutions in Mexico are currently going through due to the pandemic crisis in mind, in addition to widespread political and economic uncertainty, we deem it necessary to refer to the history of the Tamayo Museum—which after forty years of activity and several managements has adjusted, in accordance with each director’s vision, the institution’s relations to the outside world[9]–to achieve a better understanding of its current leadership, and thus outline a broader panorama regarding the exhibition projects it is now presenting. 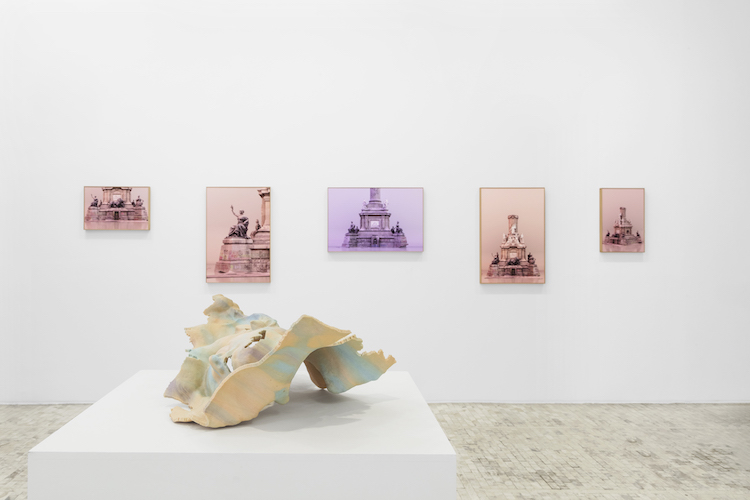 Starting in 2019, the Tamayo Museum changed its management and curatorial axis, through the appointment of Magalí Arriola and Humberto Moro at the helm of the institution. In an interview, Arriola described the objectives of the new administration, and emphasized the idea of continuity, taking into account both the constitutive specificities of the museum, described above, and the work of past leaderships. Arriola reiterated that the model of linkage between public and private funds that has been a main feature of the museum, spearheaded by the Tamayo Foundation, would be assimilated under an expectation of reaffirmation and renovation, with the goal of “obtaining better budgets not only from the government but also from other types of fundraising that allow us to work loosely”.[10] For the Director, this turnaround would allow her to consolidate a structure built through various sources of funds in order to carry out what she considers the museum’s essential mission: to generate “knowledge” and create easily exportable proposals.[11] Arriola highlighted the example of the Jumex Museum as a direct antecedent that allows us to think of each exhibition conceived and produced in the museum as a form of negotiation with the outside world. This operation alters the original conception of the Tamayo Museum through a subtle twist. Instead of promoting, as in the beginning, a “permanent collection of international art” open to global dialogue, this other model seeks to operate as a platform capable of promoting, not only the work of a painter abroad in dialogue with their contemporaries (as in the original Olga and Tamayo program) but that of a strategically selected artistic sector as a whole.

In this context, the exhibition OTRXS MUNDXS [Other Worlds], curated by Humberto Moro and Andrés Valtierra, is the first exhibition project of this new administration. In the words of the curators, the show—divided into four thematic nuclei and with the participation of 40 artists—”presents recent work and special commissions that reveal urgent discourses, representative of an artistic community that internalizes the paradigms and failures of late capitalism.”[12] The exhibition highlights otherness from a multicultural approach, a trend inaugurated in the eighties. In curatorial terms, this model sought to reinsert peripheral zones into a cosmopolitan discourse, by placing alternative geographies as the main characters with the objective of counteracting the Euro-Atlantic narrative. Following this premise, the proposal uncovers alternative visions of what it means to make art in or from Mexico City through a museum device, capable of representing heterogeneity in a totalizing and inclusive/exclusive way. In general, OTRXS MUNDXS, which reuses these postmodern clichés, as is the case with the wink to Frederic Jameson,[13] highlights a contrast based on the dialogue between two types of works and staging proposals: those pieces that refer to a scenography that completely invades the walls of the museum (Pia Camil, Marcos Castro, Yann Gerstberger, Marco Rountree), versus works that boast clear formal subtleties as well as a discursive power (Fernanda Barreto, Madeline Jiménez, Rita Ponce de León, Noé Martínez, Josué Mejía, Fernando Palma, ektor Garcia, Javier Barrios). 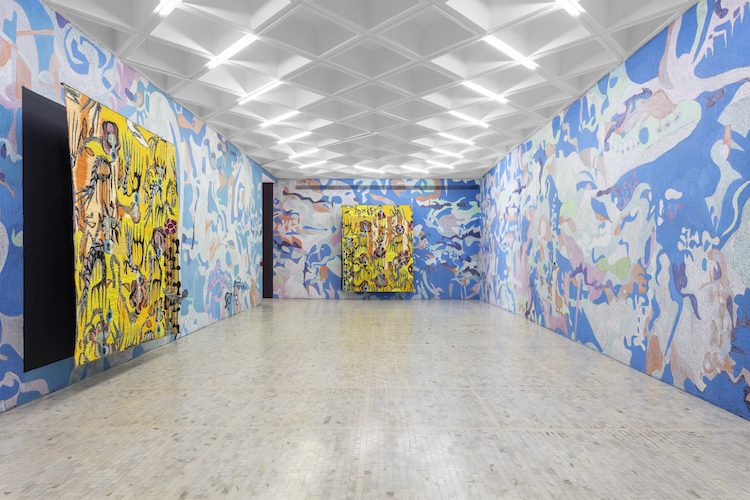 There is no doubt that the opening to an “emerging generation” was driven by the precarious effect of state policies, however, this action implied a turning point for the Tamayo Museum as well as for the institutional field of contemporary art, since the opening of spaces to local artists with a career still on the rise is scarce in other museums of the city.

This exhibition insists on showing the Mexican capital as a breeding ground, able to receive and incorpore a plurality of proposals and perspectives. Thus, it ends up reaffirming a centralist tradition by focusing, once again, general attention on a single point. This exhibition, designed under a central mediation apparatus and appealing to global rhetoric (always longing for the exoticism of our south), is the first step to reach that expectation of international circulation.

The first work that is observed upon entering the museum is that of Pia Camil, who displays a series of T-shirts extracted from the pacas[14] which she weaves together until they completely invade the walls of the museum, thus proposing a glorification of the “popular” forms of production, circulation and consumption, a proposal to which is added the ceramic work of the Colectivo SANGREE. Camil’s exercise captures the informal market of the tianguis and redistributes it into the formal art market. In that sense, her work not only highlights the processes of circulation of second-hand goods but also opens the door for these T-shirts to continue migrating from one economy to another. In this regard, the exhibition outlines an approach to otherness as an object of representation, making a leap from the t-shirts’ cotton to other material uses such as Berenice Olmedo’s prosthesis, Fernanda Barreto’s tied ropes, Yeni Mao’s structural creations; or through self-referential and intimate experiences such as Noé Martínez’s oil paintings or ektor garcia’s weavings. This apparently inclusive effort does nothing more than to abstract a body of works to condense the theme of “the other” in order to reiterate the argumentative basis of the exhibition.

Subsequently, a series of artists work on the idea of memory/archive while giving alternative meanings to our present: Miguel Calderón’s images in ruins, Julieta Gil’s archives printed with a pink sieve of intervened monuments, and Tercerunquinto’s cleaning cloths. We believe that cautioun is advised in regards to some discursive operations unleashed in this section, given the invisibilization/appropriation/mediation of different social realities to which some of the works appeal, as well as the collective/anonymous processes and direct action that are left out when these processes are taken up to art’s pedestal. In contrast, the exhibition traces a zigzag with the speculation of scenarios that refer to dreamlike panoramas worked by Daniel Godínez, to the extinction of humanity in a soundscape by Jerónimo Reyes-Retana, or to our perception of time in the objects exhibited by Zazil Barba, works that provoke us to imagine scenes of the future. 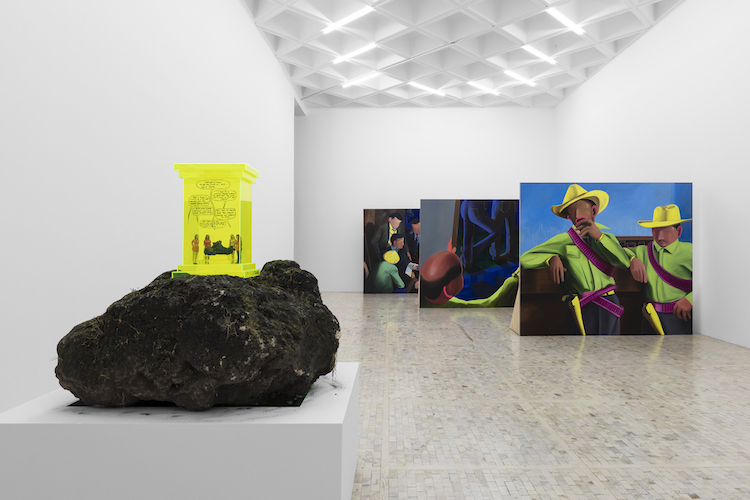 The last section of the exhibition showcases an interaction between installation and painting through works like those of Romeo Gómez López and Ana Segovia. This colorful link lets loose a series of redefinitions on masculinity, where Segovia redraws in three paintings-scenographies the classic figure of the charro stemming from national cinematographic tradition, while Gómez López reveals from a diorama-tribute to the heterostone, a model and norm of artistic production. The heterostone is defined by the artist as a virile and constant strategy of contemporary art. The work, in fact, activates a tension in the exhibition itself. This wise comment contrasts with one of the works with the greatest presence in the exhibition: a monumental sculpture-temple by Colectivo Tezontle, whose design pays homage to those architectures that built the image of virility and centrality of modern Mexico, as it happens when thinking about the structural materiality of the Tamayo Museum or the pre-Hispanic reference of the neighboring Museum of Anthropology.

The analysis of the cultural sphere has long demanded an understanding of the power devices that sustain concrete productions, be these artistic or curatorial. The Peruvian critic Juan Acha proposed (around the same time the Tamayo Museum opened) to study art by paying close attention to its consumption and distribution, in order to counteract the effects of the “ideological apparatuses”.[15] This journey, immersed in a moment of total hopelessness—where a grotesque etching seems closer than a sugarcoated image of utopia—in face of the evident institutional dismantling, the critical situation of INBAL workers,[16] and a new episode of cultural centralization (also in Chapultepec park) headed by another artist, leads us to question: Can a possibility for the future arise from the same device that enforces an act of domination?[17] In contrast to other parallel processes:[18] when will the roles of the museum change in Mexico as a result of a redistribution of the means of production and processes of resignification?[19] When will institutions fracture these structures of mediation, so that other subjectivities will be the ones to build the alternatives of representation of these other worlds?[20]