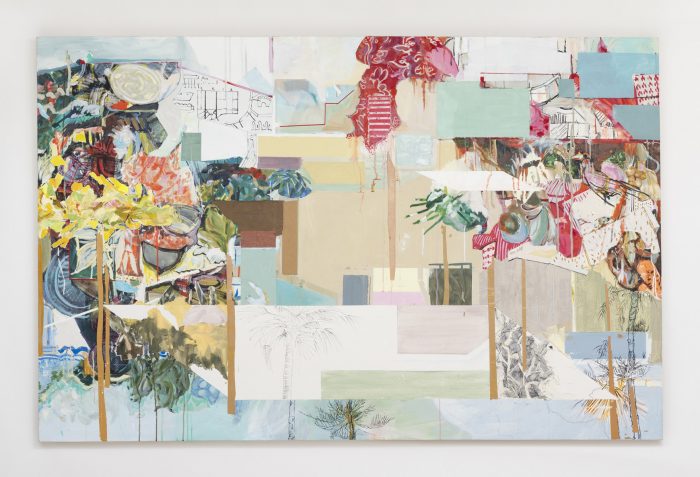 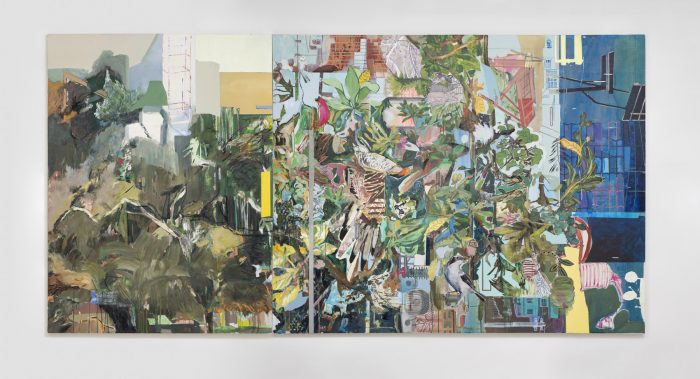 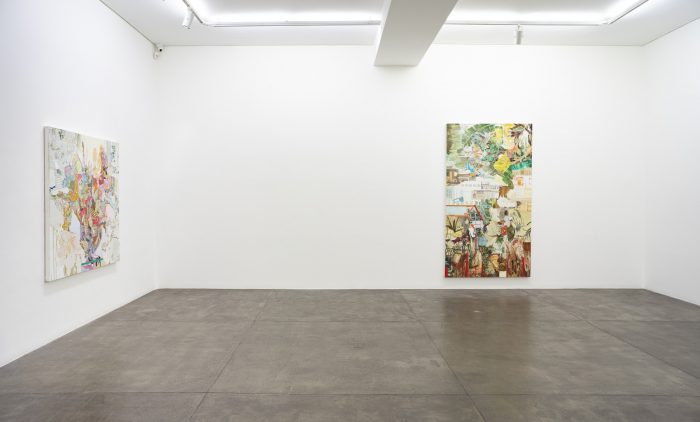 Fortes D’Aloia & Gabriel is pleased to announce an exhibition of new work by Lucia Laguna. This is the artist’s second solo at the gallery and her first after the comprehensive overview show held at MASP in 2018. In this new set of paintings Lucia follows up on the three series—Jardins (Gardens), Paisagens (Landscapes) and Estúdios (Studios)—that have been directing her production from the start. Such tripartite division points towards an indivisibility between her working process and the space of her studio in the north zone of Rio de Janeiro. It’s from that place—and from the observation of its surroundings stretching from her backyard to Morro da Mangueira—that the artist creates hybrid landscapes merging architecture and vegetation, geometric planes and figurative elements.

Paisagem n. 121 (Landscape no. 121) demonstrates the artist’s method. Lucia begins by allowing her assistants to create outlines and add drawings, as well as other graphic elements to the surface of the canvas. When the artist takes over the deconstruction of what has been there starts, so that new backgrounds are constructed over juxtapositions that add layers to the final outcome.

The peculiar crossing between abstraction and figuration, which is at stake in her painting, becomes evident in the diptych Paisagem n. 118 (Landscape no. 118). While the picture on the left reveals a dissolved, almost liquid—therefore more abstract—landscape, on the right we see a more figurative composition, with elements such as birds and traffic lights. Such coexistence of pictorial insertions from disparate origins is also present in Paisagem n. 120 (Landscape no. 120), where she experiments with vertical formats—unusual in her body of work.

Another aspect of Laguna’s modus operandi stands-out in Jardim n. 44 (Garden no. 44): the square canvas is turned upside-down many times during the painting process. Therefore, the profusion of colors and figures that blossom from the center of the painting can take on ambiguous features depending on how it is looked at, evoking either a flower bouquet, or a rooster.

Lucia Laguna was born in Campo dos Goytacazes (Rio de Janeiro state, Brazil), in 1941. In 1971, she received a Bachelor of Arts in Language and Literature degree, and began to teach Portuguese. In the mid 1990’s, she attended Painting and Art History programs at Parque Lage, in Rio de Janeiro, and had her first solo show in 1998. In 2006, she was awarded the Marcantônio Vilaça Prize from CNI SESI. Among her most recent solo shows stand-out: Vizinhança, MASP (São Paulo, 2018); and Enquanto bebo a água, a água me bebe, MAR (Rio de Janeiro, 2016). The main group shows in which she has participated include: 30th Bienal de São Paulo (2012), 32nd Panorama da Arte Brasileira, MAM-SP (2011), Programa Rumos Artes Visuais Itaú Cultural (São Paulo, 2005–2006). On April, the artist will took part on the 12th Bienal do Mercosul in Porto Alegre. Her work is featured in many important public museum collections, such as MASP, MAM-SP, MAM-RJ, MAR, among others.