"The Desire To Participate In the Present and Future of Cuba": 27N Manifesto

Faced with the repression, censorship, and abuse of power exercised by the Cuban government against cultural workers on the island, we share Manifesto 27N collectively written by Cuban artists, activists, and journalists in defense of life. Solidarity with our colleagues! 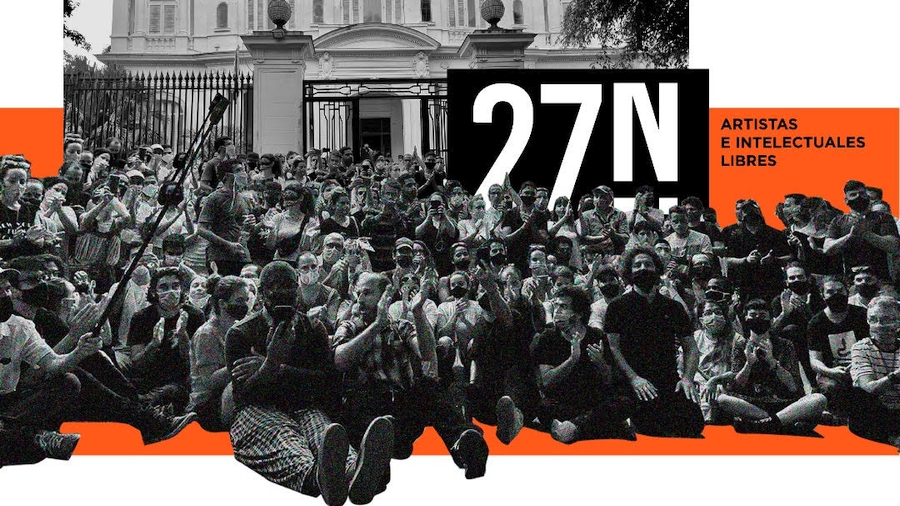 On November 27, 2020, more than three hundred intellectuals, artists, and journalists convened at the Ministry of Culture to demand the recognition of our rights and freedoms as citizens; and to reject State violence, which has been carried out for years and has increased in recent months. This demonstration was triggered by the events in the San Isidro neighborhood the night before. 27N arose out of the need to advocate for demands that were expressed that day, and our desire to participate in the present and future of Cuba.

We are an open, diverse community, mostly composed of young artists and intellectuals. We came together by chance and are united in our desire to create a more dignified and just country for all Cubans. Our organization is horizontal as we try to replace the vertical style of traditional leadership through debate and consensus-building that is attuned to the diverse views of our membership rather than insisting on unanimous opinion. We seek to promote more democratic, pluralist, and inclusive practices. We are a civic organization or movement rather than a political party. We rely on artistic creation and intellectual work as our main tools. Through collective decision making and a dialectical process, we organize ourselves in working groups composed of activists volunteering their time as they are able and each offering their talents and skills without this implying hierarchy or privilege within our community, which grows every day and of which any Cuban citizen can be part, regardless of their ideology, occupation, place of residence, etc., as long as it is accompanied by honesty, civility, and respect for freedom of expression.

We do not act in secret because we are not doing anything illegal. We make our ideas visible on our digital platforms. We do not accept discriminatory statements that promote political hatred or that undermine the rights and freedoms defended by our community. Our actions are civic, peaceful, supportive, and promote dialogue. We are committed to addressing the current suffering of Cuban society and its aspirations for a future of democracy and welfare. There are no profit motives nor influence of foreign interests or political organizations, only the will of the Cuban citizens governs.

We base our existence on political and legal principles of the International Bill of Human Rights, as well as in the Constitution of the Republic of Cuba approved on April 19, 2019, both of which stipulate that the citizens of a given State must be able to enjoy with full equality of all rights and freedoms, without distinctions of race, color, gender, sexual identity, political position, level of economic access, social origin, place of birth, religion, disability status, and any other condition.

We thus assert our right to express ourselves, to associate and demonstrate freely, and we condemn before Cuba and the world any act that violates these fundamental human rights. We demand that the Cuban government assume its administrative duty to listen to its citizens, to promote peace and respect for our rights.

The Country We Dream of

We want a country that is inclusive, democratic, sovereign, prosperous, equitable, and transnational. We want a nation where expressing oneself freely is not an act of bravery and defiance, but a natural consequence of independent thought. A nation where there is no political hatred, police violence, repression, censorship, media manipulation, violation of privacy, or acts of repudiation; in short, we want to bring an end to the abusive practices of power exercised by a centralized, military, and partisan political leadership, which discriminates and seeks to invalidate those who dissent, thus violating their human rights. We reclaim the legitimacy of open and free dissent and critical thinking as a vital exercise to avoid immobility, corruption, and the wrongdoing of officials or any other entity of society that threatens its development. As a country, we need to repair the damage done by indoctrination. To replace the lies and bad habits that have become ingrained for the will and commitment to rescue honesty and love for truth as a guiding principle.

Cuba needs a change, and for this, it needs to build a more participatory citizenry with a greater degree of awareness that the political and economic future of this country depends on us.

In order to rebuild our nation, honesty must be a guiding principle. We must decentralize and recover the political power that has been usurped from the citizenry. Our future Cuba should be designed taking into account the needs and desires of all Cuban citizens, who should all have equal rights to participate in its design, regardless of their ideology, political affiliation, or place of residence.

We need to reaffirm ourselves as people who are different from each other, as ecumenical, tolerant citizens, respectful of the opinions of others. Consequently, we advocate for laws that guarantee our right to develop as a heterogeneous society, where laws created for the benefit of the majority do not restrict or disregard the rights of minorities. We are not enemies; we are Cubans who dream of a better Cuba to bequeath to our children, on behalf of everyone and for the good of all.

We aspire to work for a society with social justice and welfare, where every Cuban can live in Cuba / in their country from the fruits of their labor, where the productive forces are liberated and bureaucratic parasitism is replaced by a capable and proactive civil service. We want to leave behind the misery and shortages imposed by the incompetence of the prevailing system. We want to guarantee the right to a dignified life, which should guarantee -among other things- healthcare and public education. 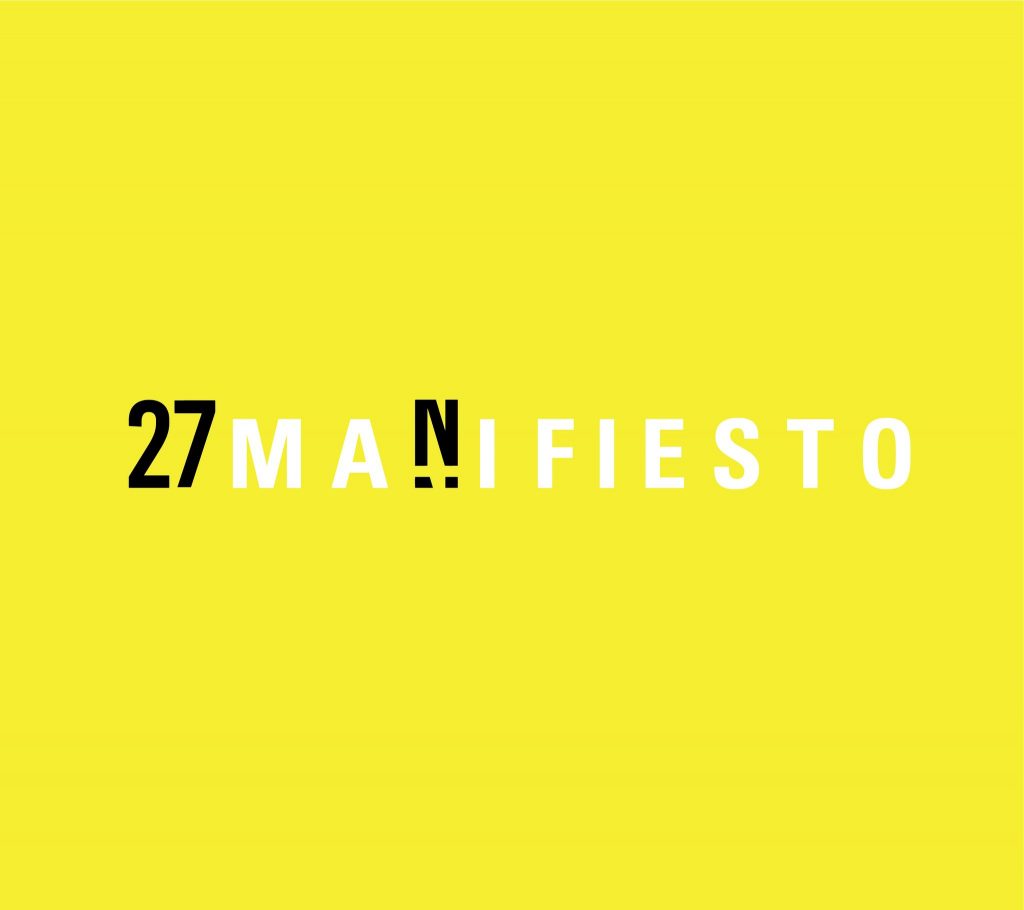 In order to advance in the construction of the country we dream of, our community has the following objectives:

Promote citizen participation for the reclaiming of rights

We seek to vindicate rights and liberties endorsed in our constitution but denied by the political power structure in Cuba. To this end, citizen participation and the exercise of civil liberties are essential in the face of censorship, repression, and any attempt to subject the Cuban people to the will of an authoritarian and exclusionary government.

We intend to work with various groups, associations, and actors in general of the Cuban civil society, to find common concerns, interests, and strategies; to establish spaces for debate, alliances, projects, and goals together, to collaborate with each other and move forward together while embracing our diversity for the construction of a better country.

Promote the legalization of independent endeavor and expression

We assert the right to free association and assembly, we claim and exercise the right to create public and private, physical and virtual spaces that allow for greater collective and personal autonomy.

Our main demands are:

We demand that all persons who have been tried and condemned for expressing ideas contrary to the current political system be released. We advocate that norms of due criminal process be complied in Cuba and that the Law of Criminal Procedure is updated to provide the accused with greater guarantees than those that currently exist.

We demand the cessation of repression by State institutions against citizens based on their political and personal views.

The media campaign aimed at discrediting independent creators, political, cultural, and civic activists, as well as civically active subjects in any area of society who claim the rights that are not respected, including the right to protest, to be stopped.

We affirm the right of every citizen to engage in different forms of economic activity, ownership, and management. We value the role of private initiative and the exercise of economic freedoms that enable the promotion of productive capacities and generate goods and services essential for the development of the nation.

We defend the right of every citizen to engage in decent labor and receive the fruits it generates. We consider any form of work legitimate as long as it is not harmful to human dignity and does not harm the freedom and ability of other citizens to prosper. We are convinced that without the consolidation of an adequate material base for our society, welfare and social equity cannot be achieved.

We urge the Cuban State to legalize the so-called independent media so that all involved can obtain legal status and register as legal entities. By complying with Cuban laws, these media would be protected by legal regulations, harassment of independent journalists would cease, and these media organizations would be accountable to society in a transparent manner, complying with the ethical, technical, and fiscal responsibilities required by law. In a climate of tolerance and legality, a relationship between the State, the press, and society would be generated in which the imperative for all media would be truthfulness in the news and rigor in the approach.

We claim the right to form collectivities to actively participate, without further delays or pretexts, in the construction of a better reality, one in which our considerations and expectations are taken into account.

We understand that freedom of assembly and the right to collective organization is essential to achieve true citizen participation in the economic, social, and political processes of the country.

We demand respect for the right to organize and the right to assembly that Cuba has endorsed in Convention No. 87 of the International Labor Organization and in the Labor Code of our country, for the protection of the labor rights of every citizen linked or not with the State through labor contracts, without distinction of race, gender, creed, or political positioning.

Convinced that winning these rights begins with the will to defend them with courage, we urge all Cubans, inside and outside Cuba, in the spirit of unity and peace, of understanding and communication, to the search for truth, to express what we think and feel, to defend in solidarity those who are repressed and defamed for expressing themselves freely. From an act of solidarity, 27N was born and continues to live for its sense of responsibility, creating and adding, for the right to have rights, and for love and poetry to unite these people.