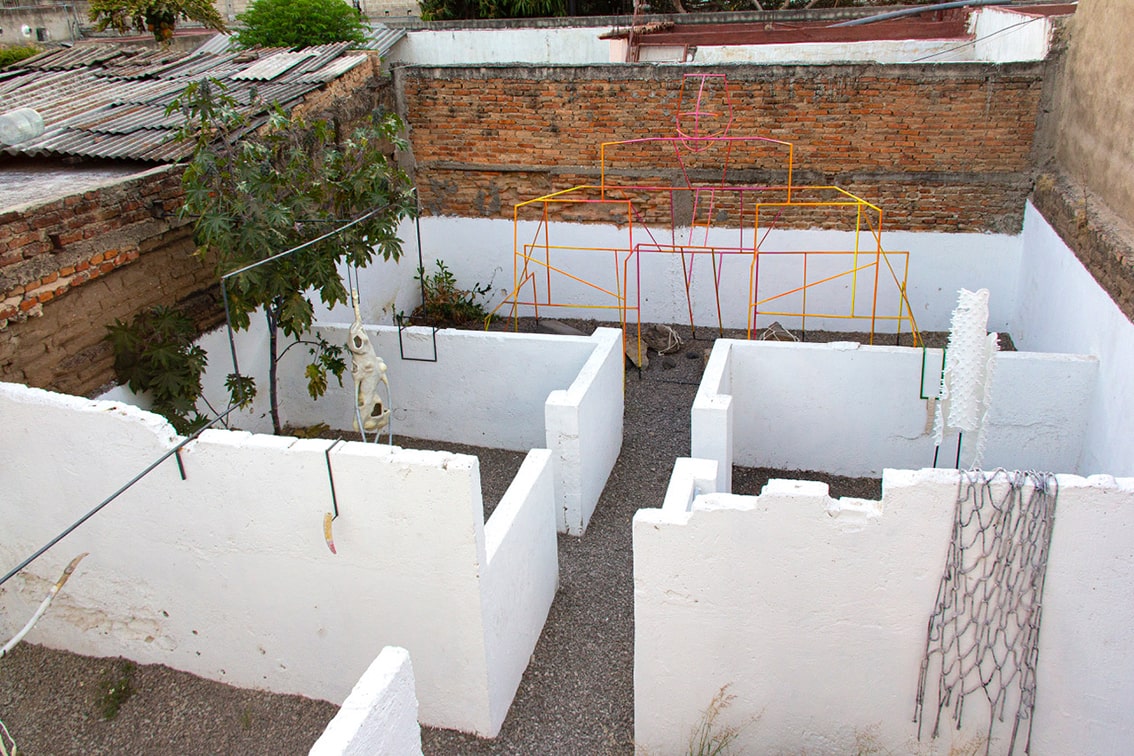 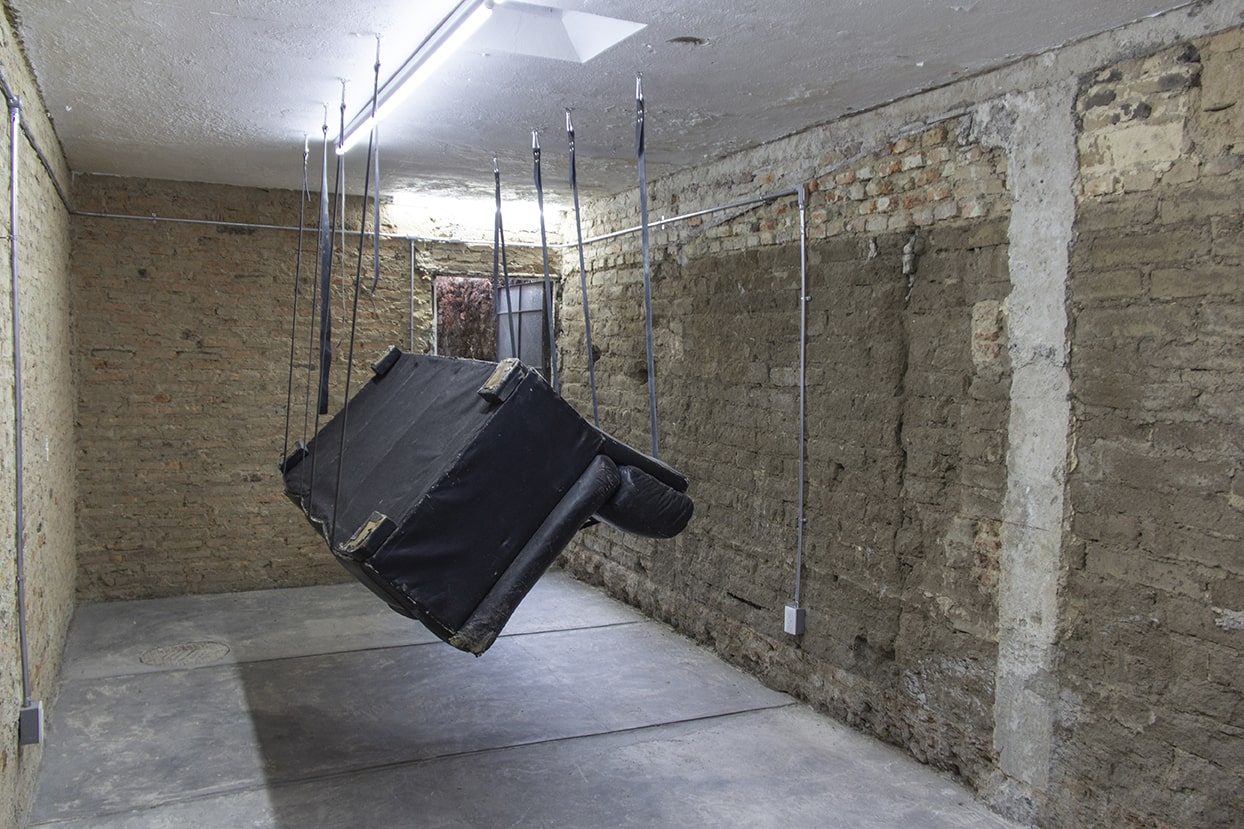 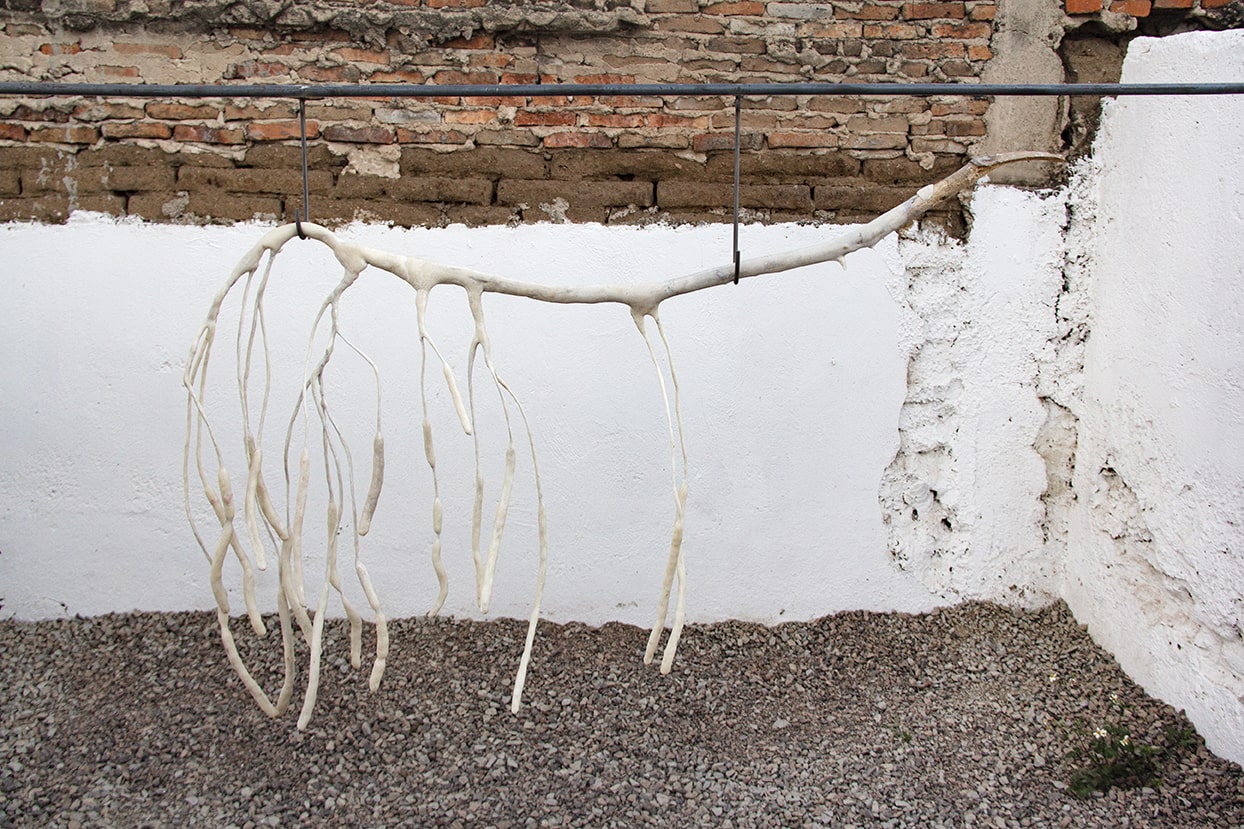 This show was conceived watching Harry Harlow’s experiments about the nature of love and affection, using baby monkeys and artificial mothers. The study seemed apt for this period of pandemic; the way we experience disconnection between us, viscerally, with our bodies. The exhibition creates a structure open to play, to the exploration of the uncontrollable, and personal mythologies.

The piece  fig 26.1 hanuman sun wukong—a jungle gym of painted steel—arises as a support and a representation of play. Its function generates a secure condition, allowing experimentation and haptic play between the materialities of Arrogante albino1, Bayo Alvaro, and Yeni Mao. As a house is built, Mao creates the physical and ideological structure of the exhibition; Alvaro occupies this structure with botanical sculptures, encapsulating shared memories that are both hermetic and universal.

This framework invites the performance group Arrogante albino to respond to these legacies, generating temporary sculptures based on performative processes, giving a new temporality to the vocabulary of materials that constitute the exhibition.

Jungle Gym is a free, experimental and equalized space created by intergenerational queer artists. The three practices react to each other in a dynamic call and response, a dialogue of proximity.

Bayo Alvaro (b. 1992, CDMX) questions the modes of bodily representation, corporeality and dissociation in a search for reconnection with the “bodily” as a socially constructed ideal. The recovery of his own body, through interactions based on organic processes where the work is sensitive to its manipulations, is vital for his research. The influence of Buddhist thought, bio-feminism, queerness and indigenous studies in Bayo’s formation determined a framework where materials are forced into processes of continuous transformation and interdependence. Bayo Alvaro’s work focuses mainly in the field of sculpture, performance, and photography. Nonetheless, Bayo Alvaro’s multidisciplinary practice allows him to approach installation to discuss themes of bodily interactions through drawing, cooking, text, painting, video, and social and narrative processes. After completing his bachelor’s at L’École des Beaux Arts de Toulouse, Bayo completed a master’s degree at L’École des Beaux Arts de Paris Cergy. His work has been shown in various art spaces in France, Mexico and Morocco.

The sculptural practice of Yeni Mao (b. 1971, Canada) engages in issues of fragmentation, exploring the subjective body and architecture through restraint, domination and absence. Mao works with agency of materials, objects and building systems, emphasizing the tension between both their embedded and given significance. Mao layers his own personal histories over the expansiveness of these concerns.

Yeni Mao has been the subject of numerous solo exhibitions, including vol. 1: cowboys at guadalajara90210 and vol. 2: cabal at PAOS GDL in Guadalajara; Regatta at Munch Gallery; Dead Reckoning at Collette Blanchard Gallery in New York, and Whiskey Papa at Zidoun-Bossuyt in Luxembourg. Among the many group exhibitions he has participated in are Otrxs Mundxs at Museo Tamayo; Los juegos del capricornio at Arróniz Arte Contemporáneo; Luego, la Forma at Galería de Arte Mexicano (GAM) in Mexico City; Transnational at Proxyco; The Waste Land at Nicelle Beauchene in New York; and the IX Bienal De Artes Visuales Nicaraguenses, in Managua, Nicaragua. Mao has been awarded multiple residencies including Casa Wabi in Mexico, The Lijiang Studio and Red Gate Gallery in China, The Fountainhead Residency in Miami, OAZO-AIR in Amsterdam, and Flash Atöyle in Turkey. His work has been written about in The New York Times, Time Out New York, The Advocate, The Village Voice, and the Bangkok Post. In 2021 he will open exhibitions at Fierman Gallery in New York and Brooke Benington in London. Yeni Mao lives and works in Mexico City and New York.

Arrogante albino is an artists’ laboratory that takes place in Guadalajara, Jalisco (MX). Their work could be considered as a collage of media whose research center is the body. Approximate to artistic practice as a game of collective experimentation, they have developed: theater plays, actions for specific spaces and videos that evoke the unconscious, the emotional and the irrational. Their work has been presented at the Laboratorio de Artes Variedades (MX), SCAD Museum of Art (USA), Teatro Experimental de Jalisco (MX), Foro Periplo (MX), among others.

guadalajara90210 is a project dedicated to contemporary art that explores new exhibition formats. It takes as principle adapting to specific sites, resulting in unique projects. Based in CDMX and Guadalajara, Mexico, it has presented group and individual exhibitions in different locations in Mexico City, Guadalajara, Monterrey, Cholula, New York and Paris.

"The Desire To Participate In the Present and Future of Cuba": 27N Manifesto