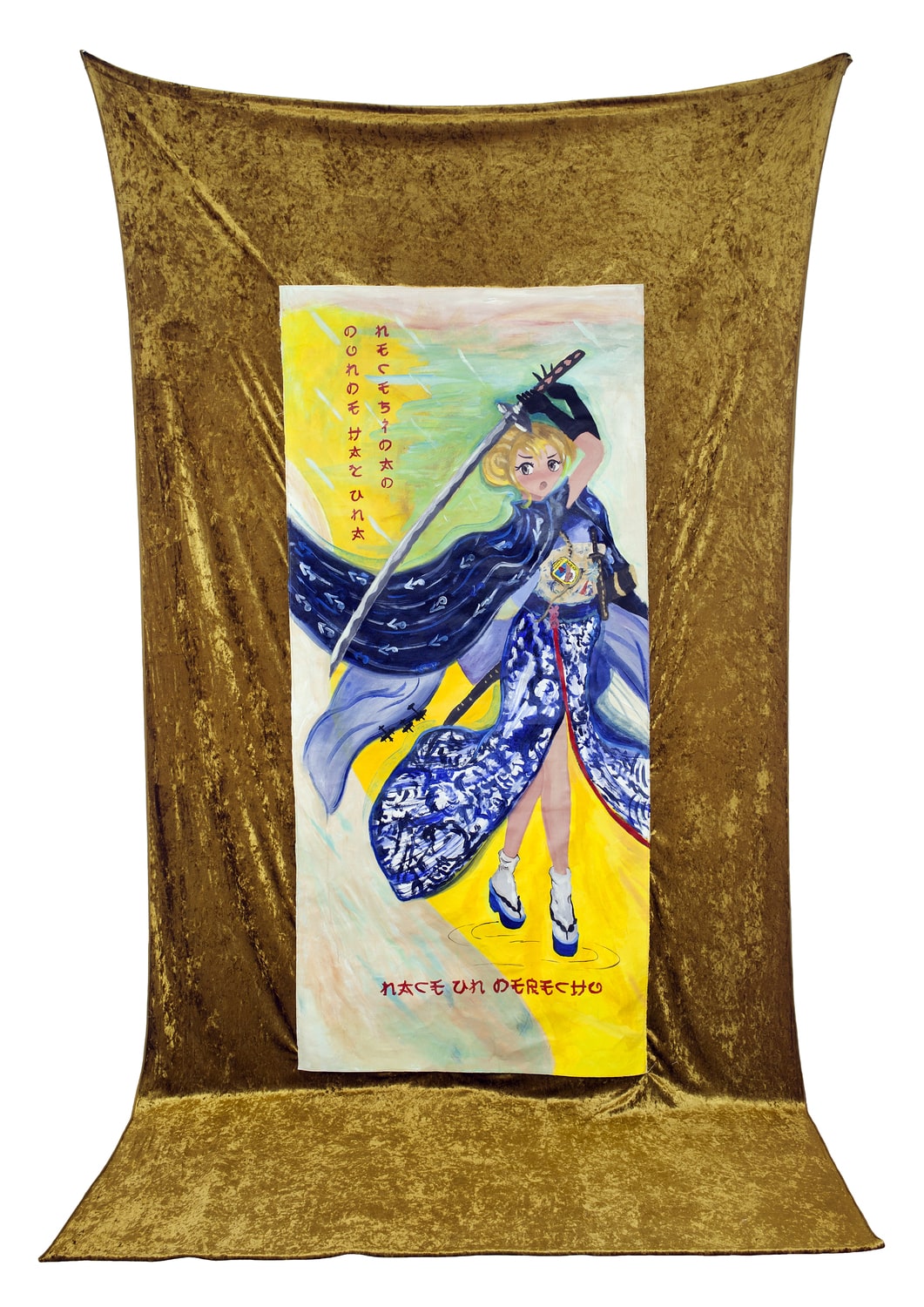 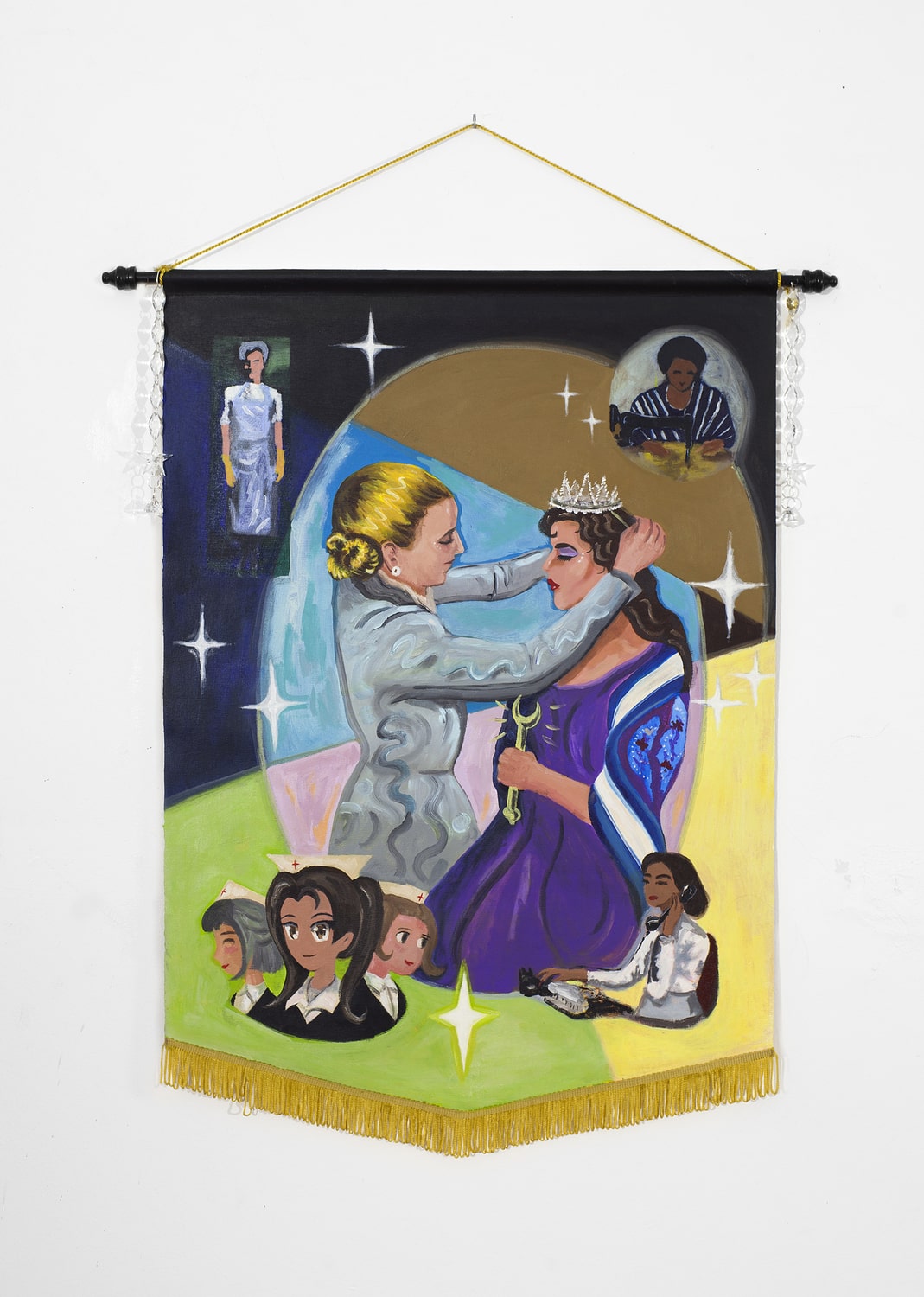 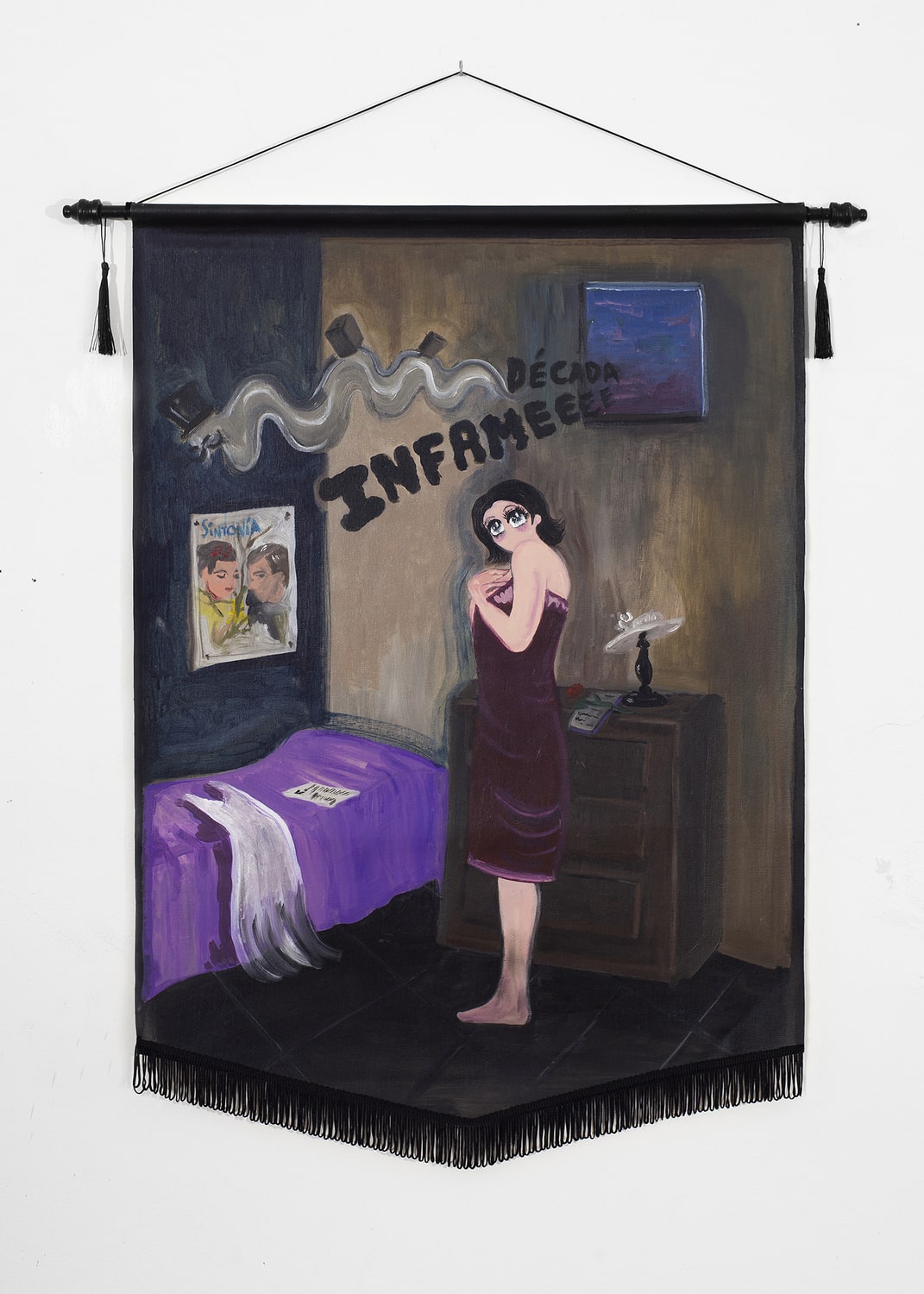 Using a contemporary visual language, Pecci Carou exhibits a series of 16 paintings —oil and acrylic on canvas— made in two formats: flags that refer to the universe of political marches and flags linked to the eastern tradition, known as kakemonos, where she recovers the most important milestones around the life and work of Eva Duarte de Perón: the fight for the civil rights of women in Argentina, and the social tasks that she carried out through the Foundation that bore her name.

In the West it is known as otaku culture: the fanastism for manga and anime. It is a constant in the works of Fátima Pecci Carou and could not be absent in Flags and pennants: Evita, the temporary exhibition of the artist that inaugurated on March 2021 at the Evita Museum.

By mixing otaku and Peronism, the artist creates a superhero, a warrior Evita in vibrant colors, with huge and resolute eyes. Along with the versions built by Fátima, the exhibition presents for the first time to the public a true jewel belonging to the Duarte family’s collection: a ceremonial kimono that Japan gave to Eva in recognition of the two ships with humanitarian aid that the Eva Foundation Perón sent them during the postwar period. Included in the show as a key piece in the intersection between reality and fiction, the kimono testifies to a surprising anchoring for the “Ninja Evita” imagined by Pecci Carou. A special bond between Evita and Japan.

Even though Fátima Pecci Carou based her work on the archives, documents, objects and collections of the Evita Museum (her dresses and hairstyles; the Foundation’s toys; the decoration of the rooms of the Transit Homes; the campaign for the female vote; the flags of the Civic Centers for Women; the creation of the Female Peronist Party and the provincial delegates; the magazines where an actress Evita appeared; the Singer sewing machine; the images of the presidential residence demolished after the military coup of ‘55) she applies a filter fiction and fantasy. Thus arises a real / imaginary Evita, re-created from current feminist struggles, nurtured by her own legend and inspiring a new look that plays lovingly with her legacy.

Yesterday and today, Evita’s figure is a symbol of irreverence, that disrupts the established order. With this exhibition, Evita continues to be that irrepressible force that keeps provoking and multiplying new forms of representation that immortalize her.

"Sheltered in Place: Portraits of Self, Family and Community": Collective show at Ottawa Art Gallery, Canada