ECONOMY IS (Above All) A QUESTION OF POLITICS. Labor Rights in the Art Field and MANUAL FOR ACTION

Guillermina Bustos and Jorge Sepúlveda T. share information on the tools developed through the organization Trabajadores de Arte to collectively and collaboratively defend the labor rights of our sector. 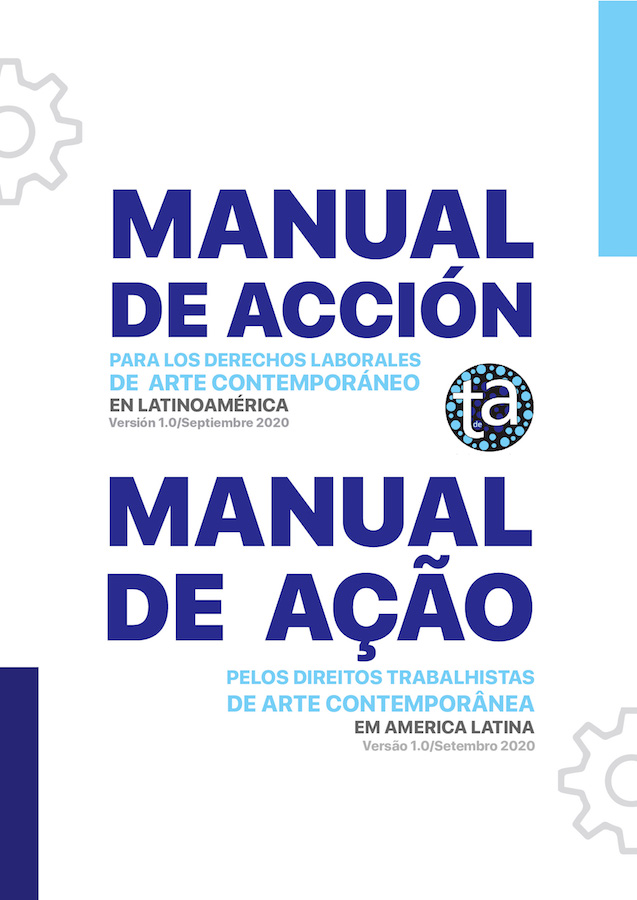 In times of confusion, diagnoses are reiterated, efficiencies revised, and structural changes in social dynamics required. As subjects, we rediscover that the individual and the collective are mutually produced.

The precarious condition of our sector, the institutional fragility in Latin America, inequality and centralization in budget distribution, and the hierarchization of a system that privileges a social class and a hegemonic subjectivity (white, cis, and burgeoise) come as no surprise.

Nor is the difficulty we have, as part of civil society, to establish and negotiate the value, necessity and relevance of our work in the field of art—as evidenced in the reiterated and naively hopeful demand for paternalistic solutions[1] or in the proposals to set back the material and conceptual complexity of labor and economic relations.[2]

Nonetheless, one of the causes of our precarious position is the fact that we have assumed these conditions as our own and constituent. We have naturalized this precariousness as a constant in our processes of identification, in our work and personal relations; subordinating ourselves to a bureaucratized opaque system that educates us and prescribes us as submissive and obedient.

And so we wonder, how can we collectively overcome a state of unease that binds us together?

Faced with a system we have learned to trust due to its reiteration and familiarity; how to overcome those conditions we have fallen in love with because they are the only conditions we have ever known? And so, what can possibly be done? Face the facts, confront the problem headfirst. 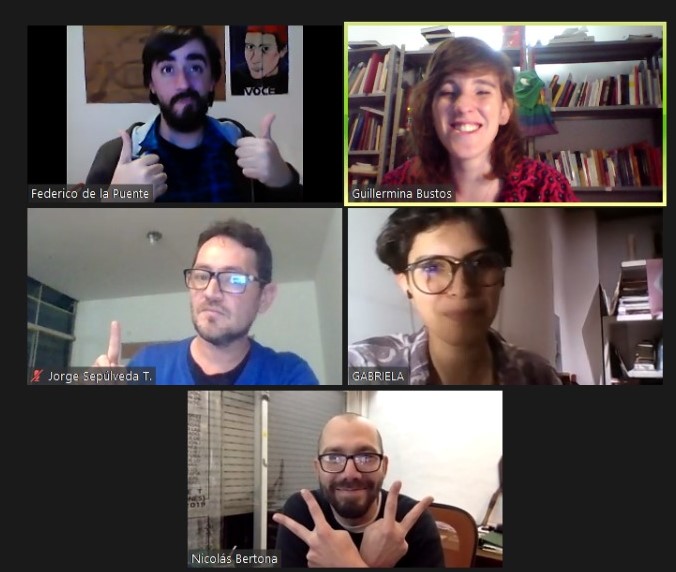 Since 2012, we have proposed an initiative that is not motivated by reactionary actions or determined by institutional or partisan attachments.[3] We understood then that diagnosis is not enough, that on many occasions it is self-indulgement and gave us a perfect excuse for inaction. Since then, we also know that effective (structural) modifications are only possible through the creation of tools, relationships, and spaces that allow for the exercise of labor rights; produced and articulated from collective experiences and local knowledges.

We knew that these structural modifications required constant dedication and sustained, long-term effort. Revolutions are slow.

We organized as an autonomous and collective initiative, a non-hierarchical civil organization, a nonprofit centered in its social and economic impact, that focuses on changing the way that the laboral conditions of Latin America’s art scene are thought of and structured, specifically through the use of research as a basis for political action.

The creation of complementary tools and change of organizational logic

In these eight years we have developed three kinds of tools: the Workers Agreements (since 2012), the Latin American Contemporary Art Census (since 2015) and the MANUAL FOR ACTION (2020). All of them are developed collectively and collaboratively by groups formed through public calls, ensuring that they are progressive and can always be updated through open debates. All of these to be freely available on our website. 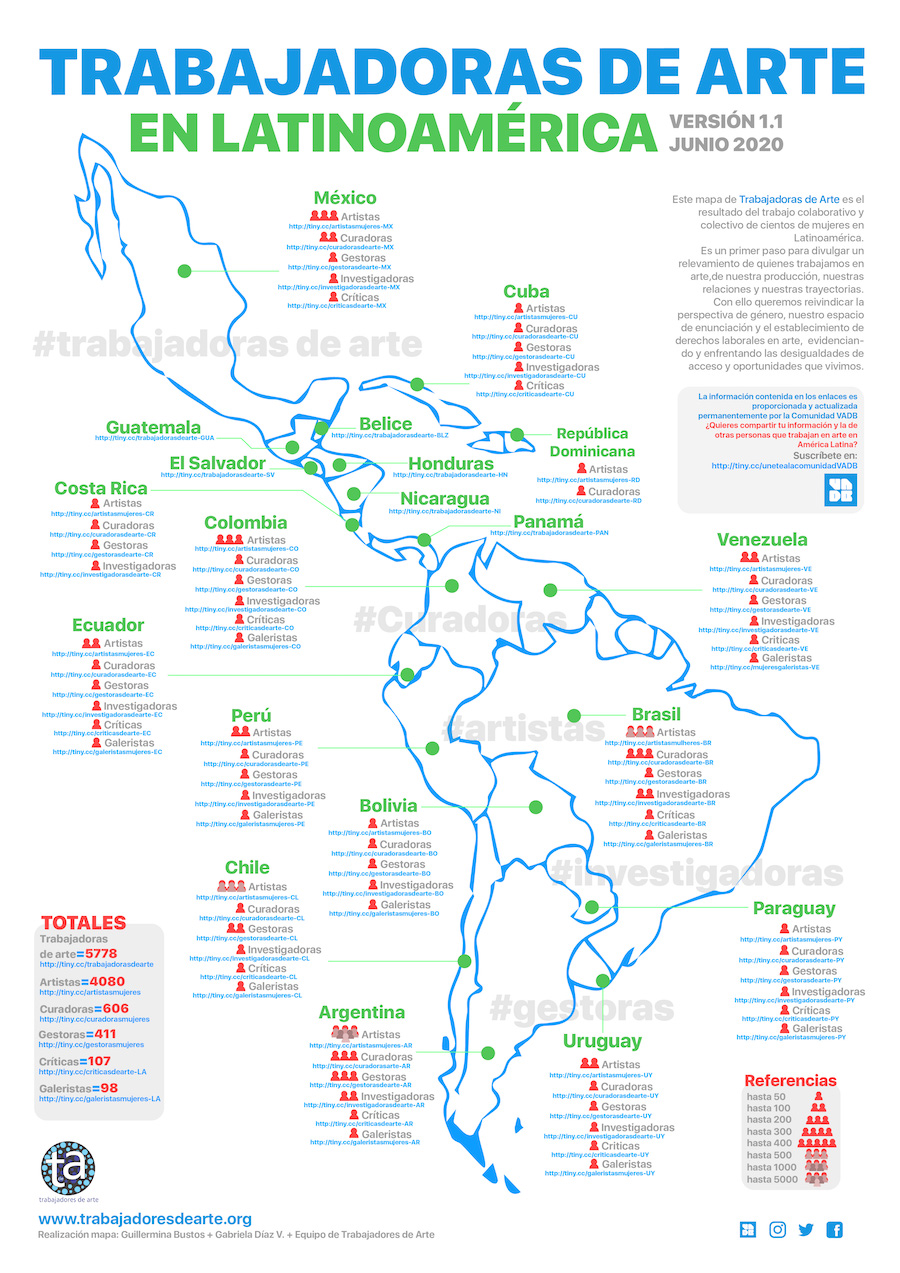 In Latin America, in countries with lower grades of professionalization or in local art scenes (not capital cities), it is assumed that artists obtain rentability from the sale of merchandise, that is to say, of their artwork. Nonetheless, this market represents only 2% to 3% of the total of art-related financial transactions that happen in our region.[4] That is to say, desire for and imagining of a certain form of systemic functioning opaques the market that represents more than 70% of the labor reality: the provision of services.

Likewise, the art system privileges the figure of the artist above other workers, without abandoning the romantic notion that artists exist outside of a system of material exchange, as if they were not economic agents. The very idea of “art worker” aims to evidence the diversity of roles that are relevant for the functioning of the art system: curators, educators, professors, assistants, art handlers, researchers, historians, etc.

To correct this distortion we decided to explicit the roles and services in a fare reference sheet and, through public consultation, determine the base value for which to charge for different jobs, such as: image usage rights, performances, hourly rates for artist’s assistants, hourly rates for installation, teaching, writing of a curatorial text, curatorship, among others.

And so we have realized six Workers Agreements for Argentina, Chile, Colombia, Ecuador, Mexico, and Peru;[5] and we find ourselves currently developing one for Brazil. 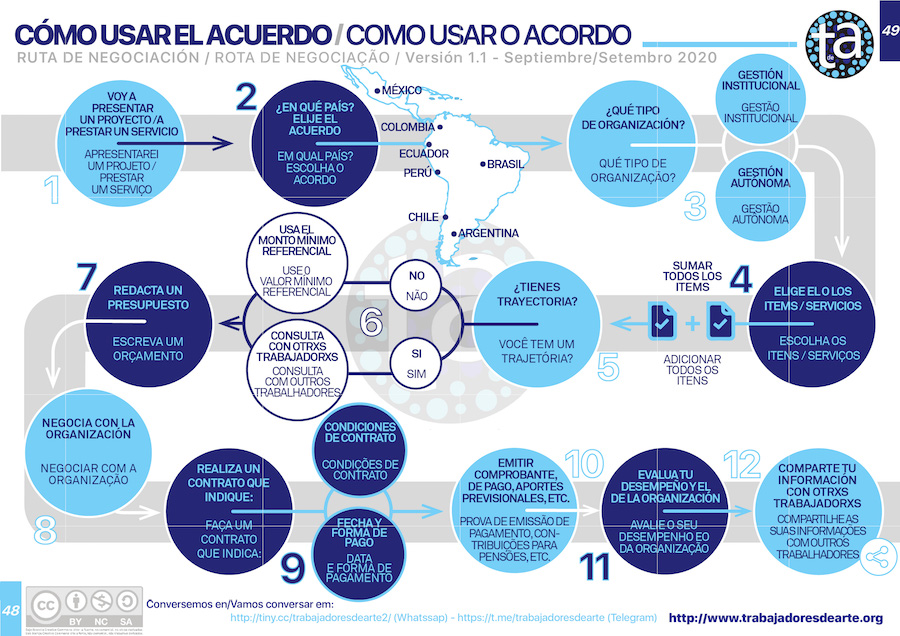 2. The Latin American Contemporary Art Census (2015 and 2020) through the data provided by its participants, allows us to have a general and specific view of the contexts of production, diffusion, and circulation of our sector’s work at continental, national, and local scales, so as to accurately capture existing labor conditions.

This tool allows us to have a precise diagnosis through qualitative and quantitative data in order to take informed individual and collective decisions, as well as informed negotiations with political and public institutions.

3. The MANUAL FOR ACTION (2020) surges from the necessity to explain the concepts utilized in the Workers Agreements, complement their use, and compile collective experiences and knowledge.[6]

This 146-page document contains practical and conceptual diagrams to understand and measure the trajectory of an art worker, their potential work relationships with different institutions, guides to taking decisions in different situations, and suggestions to establish discrimination-free laboral conditions.

It also includes a glossary of terms that details each one of the services that could possibly be lent within the labor market, as well as concepts relative to the economics of art and laboral rights.

In its turn, to complement and sustain our diagnosis through data, there is a section of maps that relate to different data in Latin America, such as: art workers who identify as women, art associations, archives, art databases, and local art scenes. Finally, there is a section for model contracts and current legislation related to art labor for each country. 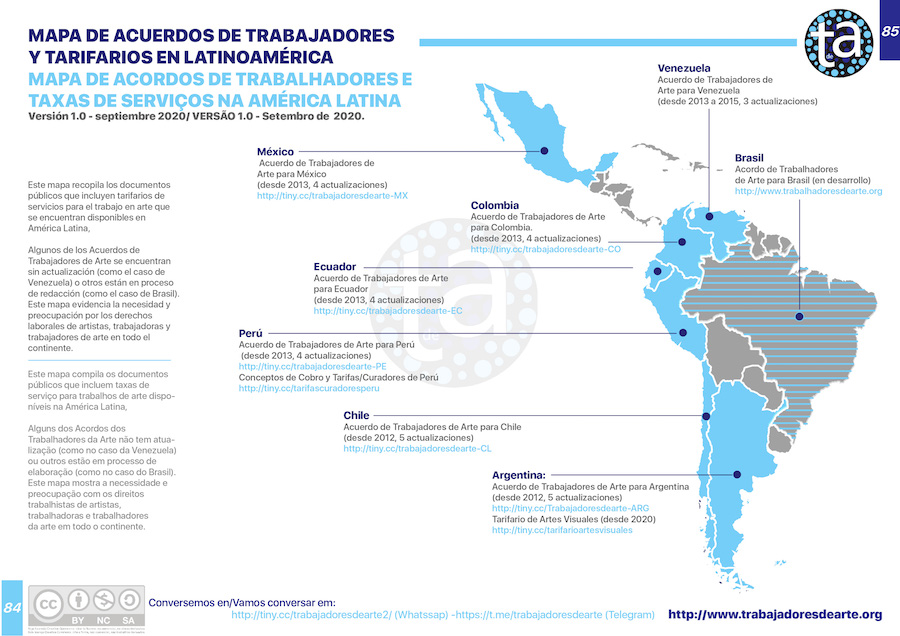 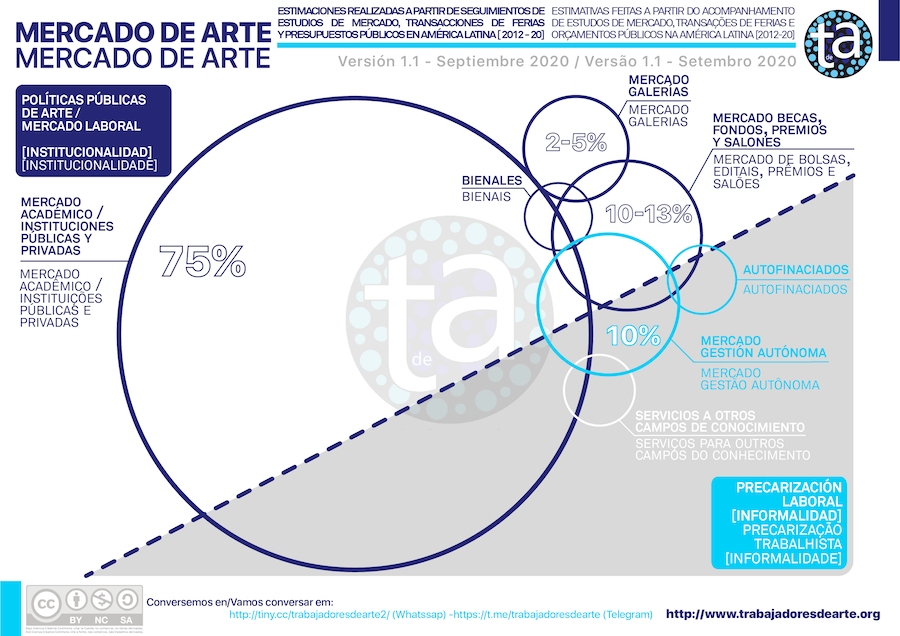 Other forms of getting involved: rights are made of relationships

We were not alone. On May 31, 2020, we called for the First Art Workers’ Assembly, which counted 330 registered members and 250 total participants from all over the region. In this instance, through voting, we agreed upon the use of these tools to establish the best laboral practices previously mentioned: the writing of the MANUAL FOR ACTION for labor rights in Latin America, and the execution of the 2nd Latin American Contemporary Art Census.

From there, we organized working groups that would be in charge of the drafting, conceptual debating, and correction of the MANUAL FOR ACTION, based on documents proposed by the coordinating group.[7]

Over the period of one month, we created and revised the bilingual  material (Spanish and Portuguese) that can be seen and downloaded freely here.

For the undertaking of the 2nd Latin American Contemporary Art Census we created Local Autonomous Groups for each country, which autonomously decided in what manner they organized, disseminated, and collaborated with the initiative. And so were formed groups in Argentina, Brasil, Chile, Colombia, Ecuador, Mexico, and Venezuela. 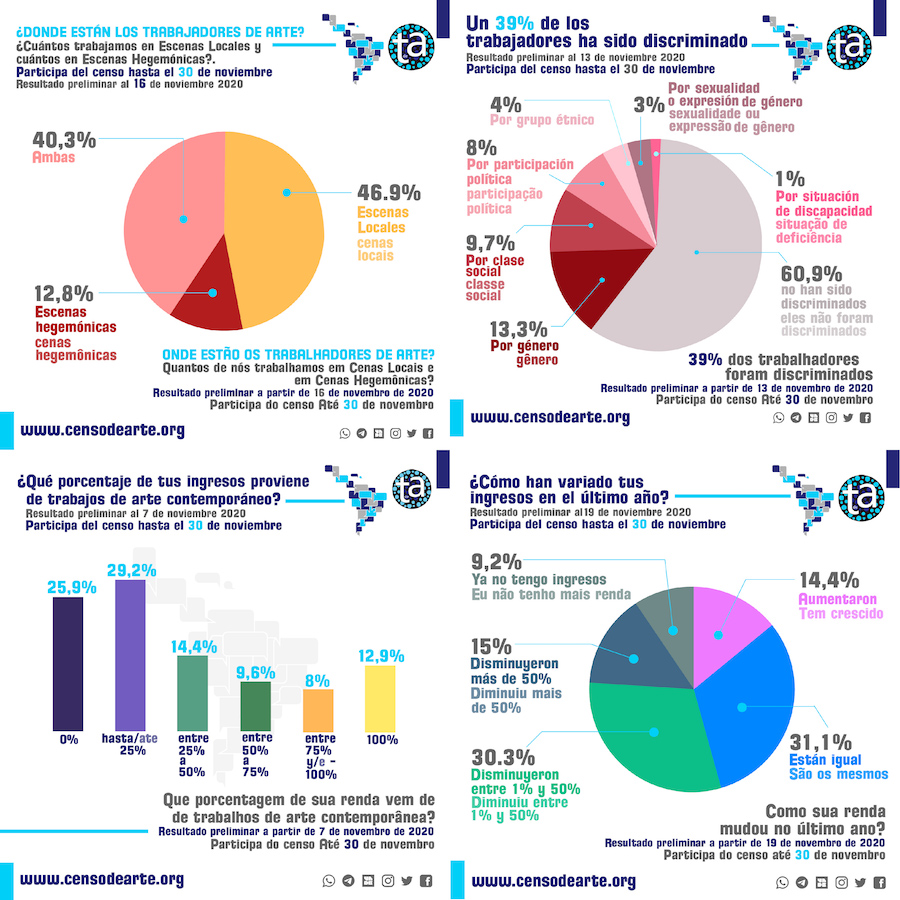 With the information gathered from this census, we plan to carry out a comparative analysis between the data gathered in 2015 with that of 2020, as well as creating reports for each country in the region, and for each local scene that has up to 50 participants. In this manner, we anticipate coming to a comprehensive, integral, diverse, and inclusive understanding of the continent’s happenings.

Through said collaborative work methodology for the development of pragmatic tools, we want to affect the very foundation of art workers’ imaginary, overcoming stereotypes and preconceived notions of our labor by recognizing ourselves as subjects in right and workers as social, economic, and political agents. Thus, understand at a continental and local level, how the art system is structured and the range of what is possible and desirable—to then push these limits, and “demystify that public politics is only state politics.”[8]

This is how we get involved and take a stand, this is how we comprehend and articulate our individual abilities: for the enunciation and exertion of rights in a collective manner.

We do this together.