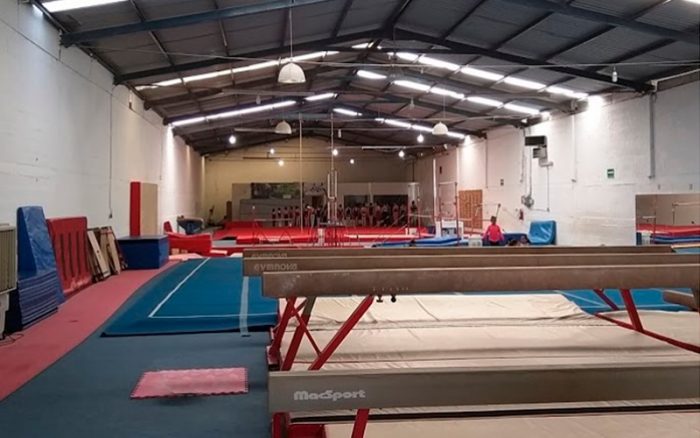 Parting from a speech on reaching bodily states, Kononenko is a performance by Gabriel Rosas Alemán for the curatorial program Desde el cuerpo, la tangente [From the body, the tangent] by Abril Zales. It is held in Gymnos, a gym located in Monterrey, Mexico, where high performance Olympic gymnasts train.

The performance/dissertation is divided into three phases: the first gives a physical description of the body in relation to movement. Through breathing and repetition, the second phase emphasizes the processes and reactions of the body against physical activity. The third and last part establishes a dialogue that allows to abstract the different bodily states.

It is from the activation of the body, text and space, that two performers (Oliver Cantú and Edy Esquivel) invite the viewer to progressively move through the gym. This occurs simultaneously with executions of Olympic gymnastics and sequences of movements that manifest the strength, endurance and balance of the body.

Kononenko is the name of a gymnastic exercise named after Natalia Kononenko (Ukraine, 1994– ). It consists of a half turn on the asymmetric bars, where the whole body responds to a previous movement of the wrist of the hand. This imperceptible movement that manages to alter the direction of the body while linking with another exercise is a minimal movement that produces an unusual change in the path and in the sequence of movements and of a routine.

Simultaneously, Rosas Alemán presents Casa serpiente, in the exhibition space of La Cresta. Although both projects respond to the body within the specific space, both also work individually.