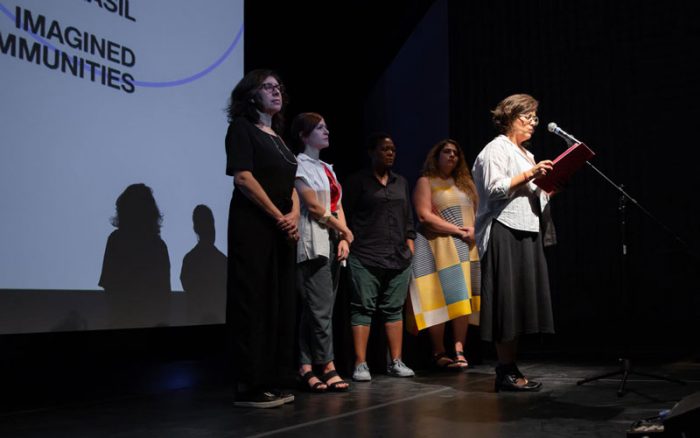 The awards, which aim to recognize and stimulate the development of artists with thought-provoking works, were selected by the international jury composed by Alexia Atala (Chile), Gabi Ngoboc (South Africa), Marta Mestre (Portugal), Rosangela Rennó (Brazil) and Reem Fadda (Kuwait). They collectively analyzed works by the 55 artists who are featured in this edition. Invited by the biennial, artist Alexandre da Cunha created the trophy-sculpture, a polished metal sculpture recreating a coconut with a straw.

The 21st Biennial of Contemporary Art runs through February 2, 2020, at Sesc 24 de Maio, in São Paulo, Brazil, featuring more than 60 works, including videos, paintings, photographs and installations, as well as video programs, open classes, meetings and talks with artists and curators.

The following is a list of prizes and awarded artists:

MMCA Residency Changdong Residency Award
Omar Mismar (Lebanon) with the video Schmitt, you and me (2016–2017)

Instituto Sacatar Residency Award
Dana Awartani (Saudi Arabia) with the installation I went away and forgot you. A while ago I remembered. I remembered I’d forgotten you. I was dreaming (2017)