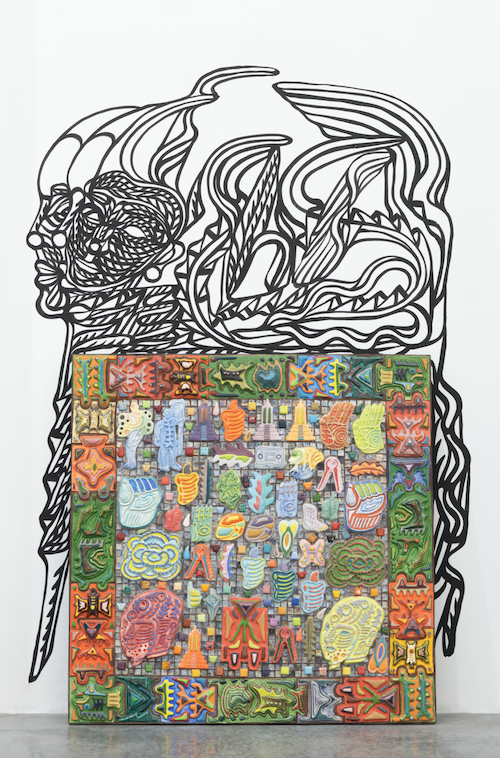 Thus concludes the hall text of Arquitectura de Voces: La Fuerza de lo Sepultado [Arquitecture of voices: the force of what is buried],  composed by Marlov Barrios (Guatemala, 1980). The tone of this exhibition is thus situated between potent poetry and pagan prayer.

To try to encompass it in a text would, in fact, be unattainable. Its vital energy resides in what the senses perceive when entering and delve into the space: the impact of the pyramid of vibrant colors; the luminous height under the ceiling; the surprise of the mural that embraces a pipe; the powerful mosaics… Then, what you discover as you get closer: the scratches made with a child’s hand in the drawings, which are jewels; the small polaroid superimposed on the analog photography; the multiple layers of oil (“there were six”); each piece of mosaic-puzzle; the black, infinite, continuous line of the mural… Each one of the works is a fragmented mirror of the title. Layers and more layers are superimposed, irreverent, like the architecture of Guatemala. Like the time in Guatemala, where epochs overlap and cohabit: from the pre-Hispanic to the active moment. As in the human being, where childhood is still present the whole life.

Arquitectura de Voces: La Fuerza de lo Sepultado, understands the viewer: voices, strong, buried. The voices that were building the present are becoming ruins, or, perhaps, buried bodies. Guatemala, a territory of violence and litany, of sedimentation, is a stimulus for Barrios.

No matter the medium, each of his works is a deaf cry, from the history of the country, from the collective memory, from childhood. Marlov Barrios’ alphabet of symbols, hieroglyphs of our times, is expressed in all of them.

A window opens: from the public space to the intimacy of an interior; from the gallery to the street. Gestated in confinement, in the exacerbation of the senses, this exhibition is a clear manifestation of the journey of master Barrios: after the recently inaugurated Estación Transparente del Deseo [Transparent Station of Desire], Guatemala celebrates twenty years of the career of a universal artist.

Arquitectura de Voces: La Fuerza de lo Sepultado by Marlov Barrios opened on Thursday, March 10, 2021 and will be on display at our gallery in Guatemala City until May 15, 2021. Galería Rebelde is open to the public Monday through Friday from 10:00 am to 5:00 pm. Digital catalog requests and appointment reservations through a@larebeldecoleccion.com.