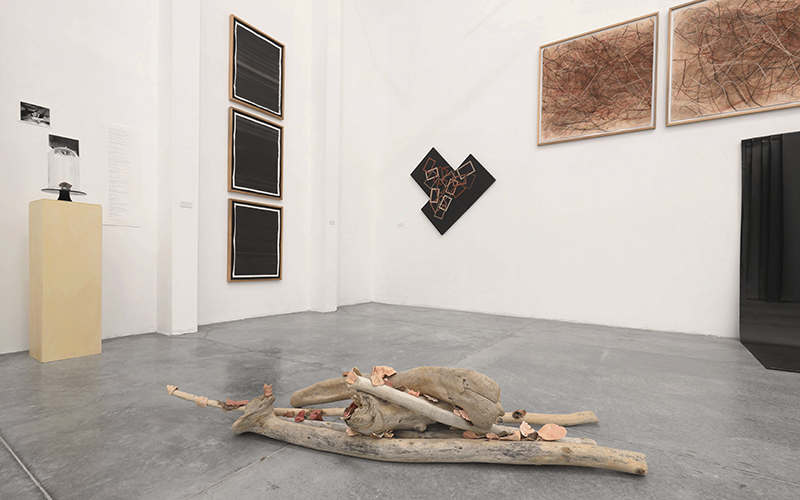 Espacio entre mundos is the staging of an inquiry into the crossing of thresholds and intermediate places between more or less well-defined territories, both in their spiritual and geographical scopes that could not be exempt from the recent manifestations of social forces to reaffirm political, partisan and identity tribes.

It’s an interdisciplinary investigation of the most intimate and socially distended events in which the artist has broken the unity of her works by dehomogenizing the titles, dispersing them in Spanish, English, Chicano and Nahuatl, and thus achieving a declaration of partial exteriority to Hispanicness while responding to Gloria E. Andalzúa’s body of work, particularly Borderlands/La frontera, a semi-autobiographical essay written in English and Spanish dedicated to the particularities of the geographical region between the United States and Mexico, with a high susceptibility to hybridization.

Although Maria Fernanda Carlos has only been able to speak of these phenomena from her induced meditative episodes, her residency status, her difficult interaction with multiple written languages and from her recent simultaneous contact with death and with the gestation of new life, this cannot be confused with an autobiographical essay. What describes the scheme of Espacio entre mundos is held by another thread: that “space in the middle” to which it alludes again and again is within the culture; we do not develop our lives there, but it is within us.

— Fragments of a text by Carlos A. Segura, Operaciones (Costa Rica) for La Galería Rebelde

María Fernanda Carlos’ Espacio entre mundos was inaugurated on Thursday, December 10, 2020 and will be on display in our gallery in Guatemala City and in our Viewing Room until February 20, 2021. Galería Rebelde is open to the public Monday through Friday from 10:00 a.m. to 5:00 p.m. Digital catalog requests and appointment bookings through a@larebeldecoleccion.com.